Accessibility links
How Adam Yauch Grew Into His Voice : The Record Even when the group was at its silliest, Adam Yauch's low, hoarse voice made him seem like the most mature member of the Beastie Boys. Over a career that went in many unexpected directions, he'd earn the title. 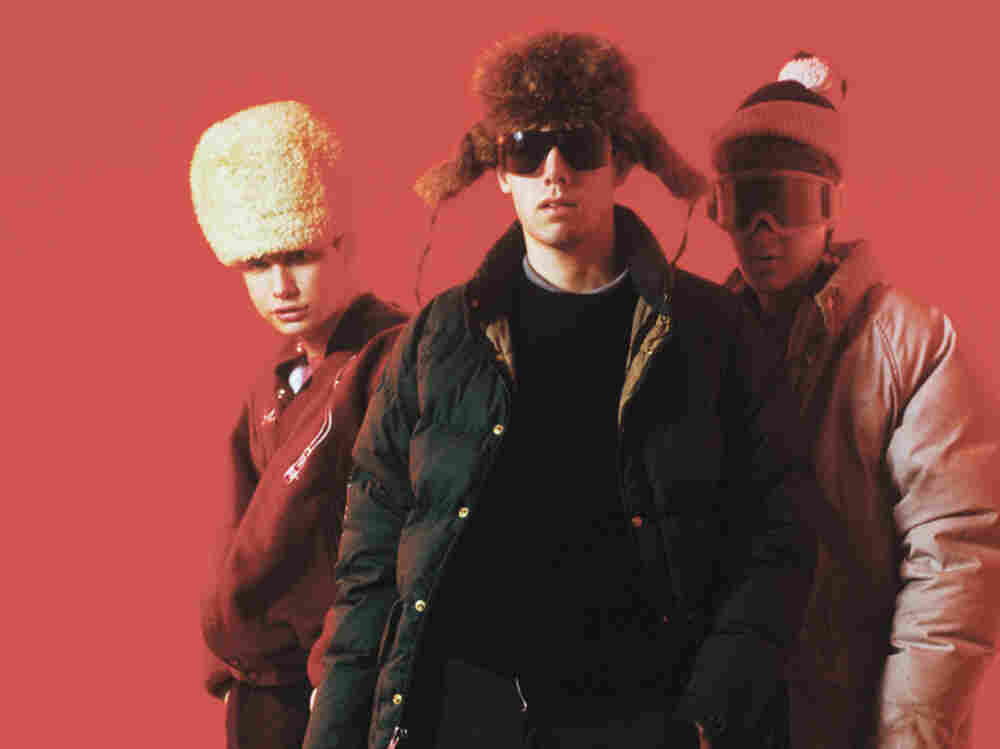 Adam Yauch (center), with Mike Diamond (right) and Adam Horovitz, in a photo from 1985, the year before the Beastie Boys' debut LP, Licensed to Ill, was released. Janette Beckman hide caption 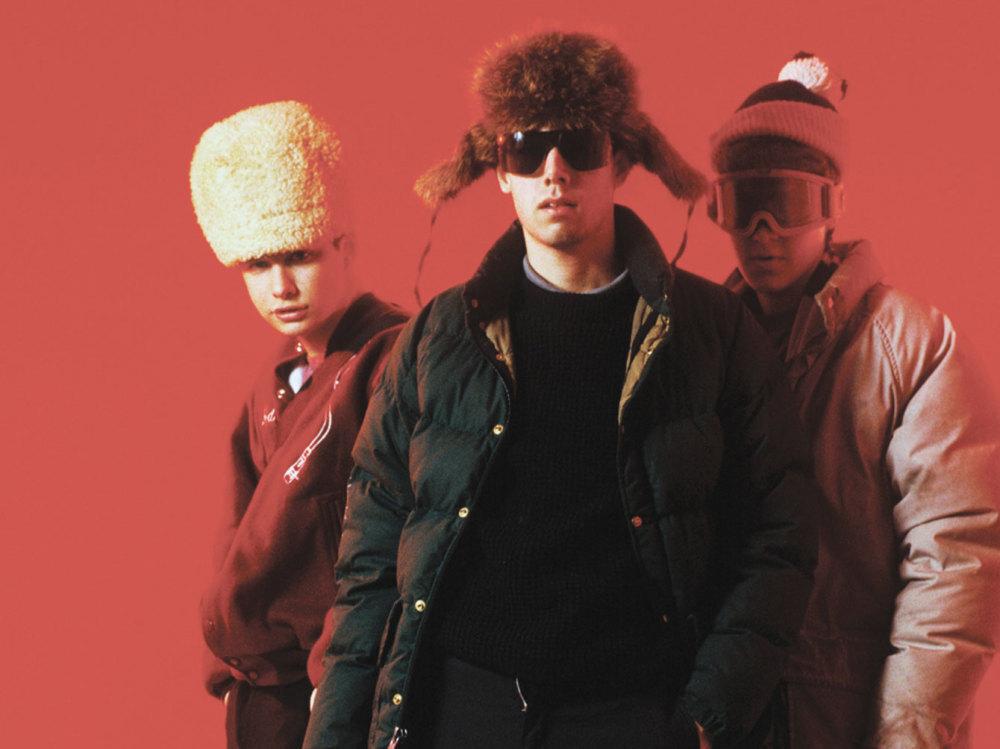 Adam Yauch (center), with Mike Diamond (right) and Adam Horovitz, in a photo from 1985, the year before the Beastie Boys' debut LP, Licensed to Ill, was released.

My first introduction to hip-hop came in 1987, when a junior high friend gave me a cassette tape with Run DMC's Raising Hell on one side and the Beastie Boys' Licensed to Ill on the other. I was 13 and completely pop-ignorant, so I had no idea that there were other groups making this same music, but even if I treated the albums like islands, I kept returning to that tape until it wore down to static.

Listening to the Beastie Boys for the next quarter century, I mostly thought of them as a group package rather than an assortment of distinct MCs. Their telltale style was a three-man, tag team weave, where each rapper — Adam "MCA" Yauch, Adam "Ad Rock" Horovitz and Michael "Mike D" Diamond — often finished each other's sentences. To tell the Beasties apart, you needed to focus on their voices.

Horovitz had the most memorable, with an elastic, screechy whine. Diamond boasted the punchiest tone, all brass and bravado. In contrast was Yauch, who, unlike his compatriots with their pinched timbres, came in low and hoarse. That gave Yauch a certain gravitas, even in his early twenties, when the Beastie Boys were just becoming international stars. Perhaps its only apropos then that of the three, Yauch, who died on Friday at 47 after a nearly three-year battle with cancer, would exert the most outsized influence on the group, especially in helping turn a pack of so-called "frat rappers" into spokespeople for international human rights.

Like the rest of the Beastie Boys, Yauch was born into a middle class, Jewish, New York family, growing up in Brooklyn as the son of an architect and a public school administrator. Also like his partners, Yauch's first foray into music was not through hip-hop but punk rock, and he met Horovitz and Diamond when all three were members of bands in Manhattan's burgeoning "downtown" scene. Before they ever became known as a rap group, the Beastie Boys first made their name with two punk rock releases, Polly Wog Stew (1982) and Cooky Puss (1983).

Cooky Puss achieved cult status on local college radio and brought the group to the attention of Rick Rubin, then a young DJ and producer at New York University who, along with Russell Simmons, was on the verge of founding the hip-hop label Def Jam. Rubin shared with the group their love of hard rock but he also saw the potential in giving the Beastie Boys a hip-hop makeover, encouraging them to dress in matching jogging suits and wear do-rags on their heads.

In essence, Rubin had positioned the Beasties as a less mature, more irreverent — and whiter — contrast to the larger-than-life swagger of Run DMC, with whom he was also collaborating. Licensed to Ill and Raising Hell both shared Rubin's penchant for thrashing rock chords and booming drums, but whereas Run DMC were all about force and thunder, the Beastie were more wit and snark, a bunch of hip-hop jesters compared to Run DMC's regality.

Both were watershed albums in helping hip-hop crossover to the mainstream. Especially amongst growing ranks of white rap fans, Licensed to Ill became a generational touchstone, a guidebook to teen rebellion and raucousness but with a street-wise edge. I was a couple of years too young or maybe just too milquetoast to understand why a song like "Fight For Your Right to Party" would be alluring but I could at least appreciate the juvenile humor of the group, with their jokes about being pirates, sneaking beers and chasing girlies. It's hard to describe Yauch as the "mature one" in that mix but if Horovitz was the clear class clown and Diamond the loose gun, Yauch projected a cooler, more authoritative persona with his raspy tone. It's no wonder that voice christens the beginning of so many of Licensed's songs, including "Posse in Effect," and "Time To Get Ill."

Few would have imagined that despite all the success the group had, working with Rubin and Def Jam, that within two years, they'd leave the label, sign with Capitol, and move to Los Angeles to record their follow-up, Paul's Boutique. For those expecting a sequel to Licensed to Ill — myself included — Paul's Boutique was a surprising reinvention. Gone were the Led Zeppelin samples and sneering impiety, in were funk and jazz textures and lyrical allusions to everything from '60s cartoons to '70s game show hosts to '80s real estate moguls. As the title of the album's 12-minute closer suggested, the Beasties now served a "B-Boy Bouillabaisse." Their next album, Check Your Head (1992) was yet another reinvention but also a return, with the band revisiting their punk roots by playing instruments on a rock/rap hybrid that practically served as a template for later bands to follow.

For Yauch, this era coincided with a profound personal change. In 1992, he began to study Tibetan Buddhism and converted to the religion in 1996. Elements of Yauch's faith emerged in the group's music, including songs such as "Shambala" and "Bodhisattva Vow," both from 1994's Ill Communication. More significantly, Yauch co-founded the Milarepa Fund in the same year to help increase awareness of the Tibetan independence movement and in 1996, helped launch a series of large-scale musical festivals known as the Tibetan Freedom Concerts, featuring the Beastie Boys amongst dozens of other groups including A Tribe Called Quest, U2, Radiohead, Wu-Tang Clan, and Rage Against the Machine.

Along the way, Yauch became the group's most outspoken member on social justice issues. For a rapper that once rapped about how "we rag-tag girlies back at the hotel" in 1986 ("The New Style"), by 1994, he was insisting, "I want to say a little something that's long overdue / the disrespect women has got to be through" ("Sure Shot"). That contrast invoked a moment of cognitive dissonance for me but it also was a reassuring sign of the possibility of growth and maturity in hip-hop.

Yauch also moved into filmmaking, having gotten his start by directing many of the group's music videos. In 2008, he co-founded the production and distribution company, Oscilloscope Laboratories, which often championed social dramas such as the 2009 veteran-themed film, The Messenger as well as last year's We Need To Talk About Kevin, a Tilda Swinton-lead movie about a teenage rampage shooter.

Throughout all this, the Beasties continued to work on music, racking up 8 studio albums and over 40 million units sold. Their basic formula, in some ways, never completely changed — that tag-team style can be heard from Licensed to Ill all the way through last year's Hot Sauce Committee Part Two, but musically, they continually experimented, releasing all-instrumental albums in 1996 (The In Sound From Way Out!) and 2007 (The Mix-Up). Especially in hip-hop, no other set of rap artists can boast the same combination of longevity and success and over that course, Yauch's journey was perhaps most remarkable of all. He debuted as a braggart of boy but grew to become one of pop's most respected statesmen.

Yauch puts his scratchy voice to good use in kicking off the call and response chant that begins the song. The track also highlights the alacrity of the Beastie Boys' three-man weave style of trading verses.

Set over the slinky bassline of Curtis Mayfield's "Pusherman," "Egg Man" describes a renegade ... egg thrower, looking for targets around town. Among Yauch's notable quotables is this bit of ironic existentialism: "What came first the chicken or the egg? / I egged the chicken, and then I ate his leg."

3rd Bass — a pair of white rappers from New York — had dissed the Beastie Boys as poseurs on their 1989 album The Cactus, and on "Professor Booty," MCA retaliates with a whole verse dedicated to putting down their upstart rivals: "I'm bad ass, move ya' fat ass, 'cause you wack son/dancing around like you think you're Janet Jackson."

MCA's plea for the respect of "mothers and sisters and wives and friends" drops in at the 2 minute mark, an the official video quick-edits in a series of still shots of women, young and old.

The lead song from the Beastie's last studio album finds the three trading four bar sets. MCA's voice's is hoarser than ever as he plays down this gem of verse: "Pass me the scalpel / I'll make an incision / I'll cut off the part of your brain that does the bitchin' / Put it in formaldehyde and put it in the shelf / And you can show it to your friends and say, 'That's my old self.'"