Accessibility links
Dudes Act Like A Lady: 'Call Me Maybe' Takes Over YouTube : The Record Boys of all types have created tribute and parody videos that realize the comic potential built into Carly Rae Jepsen's rising pop hit. 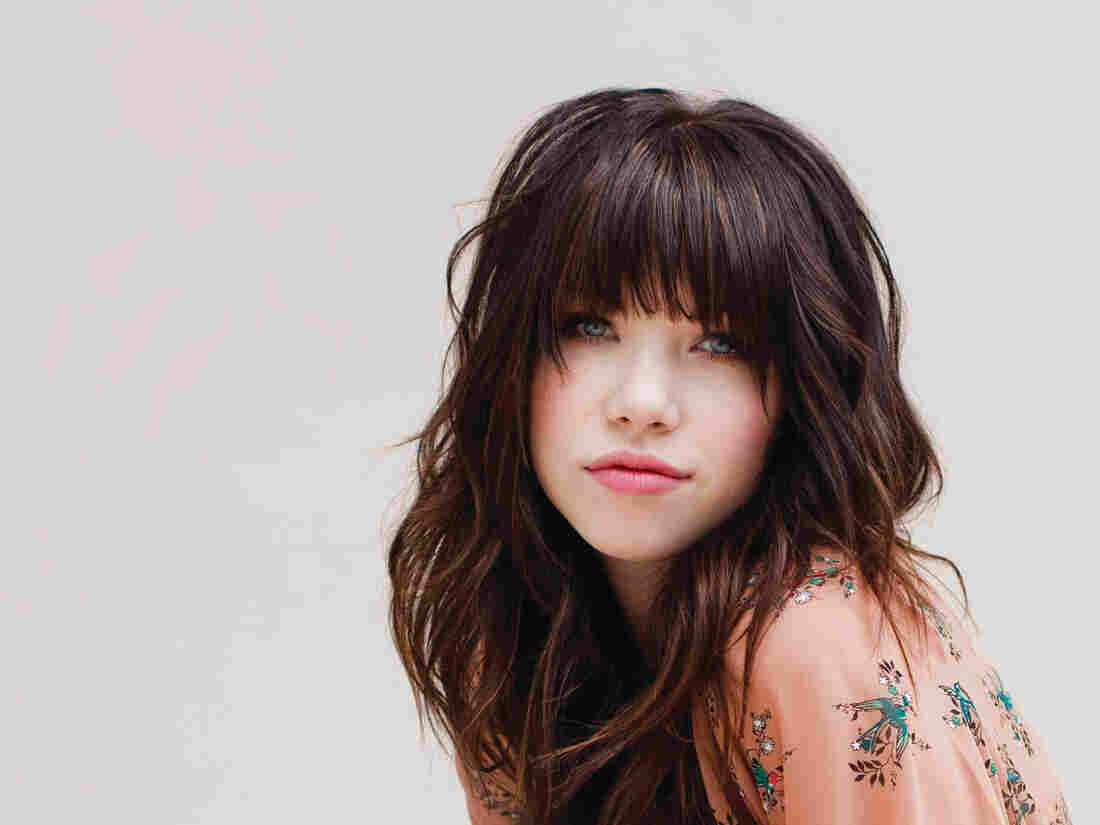 Released in December, Carly Rae Jepsen's "Call Me Maybe" has been rising on the charts — it reaches no. 5 this week — and winning the hearts of fans on YouTube. Vanessa Heins/Courtesy of the artist hide caption

Giving in to the Top 40 hit of this awakening spring — Carly Rae Jepsen's "Call Me Maybe" — is a lot like getting tickled. The song comes at you with a giggle, toppling forward with the aggressiveness of a child. "No!" you shout, but soon it's running its sparkly fingernails under your armpits and you're doubled over, laughing.

Every note vacillating between major and minor chords along the tonic; every slice of a string section that seems real but's just a synthesizer dream; every one of Jepsen's hopeful, tossed-off "maybes" and time-muddling lines about how "before you came into my life / I missed you so bad" — these details add up to make "Call Me Maybe" one of those pop songs that doesn't just describe or recall innocence, but aims to reproduce it, putting you smack inside that state of possibility. (The Village Voice critic Maura Johnston has written about how its instrumentation approximates the feeling of a crush; blogger Sydney offers a useful musical analysis.) The song's backstory only makes it better: "Call Me Maybe" is giving Jepsen herself a second chance, making her a teen queen at 26 with the help of mentorship by her spiritual sibling and fellow Canadian, Justin Bieber.

Key to the rise of "Call Me Maybe" is that Jepsen and her helpers play the song for laughs. The production itself, by Josh Ramsay of pop-punk band Marianas Trench, encourages a comic reading. Little percussive elements pile up over an already accelerated drum track, and that staccato string effect keeps punctuating the chorus to establish a slapstick mood — it's the sonic equivalent of a distracted lover walking into a wall. The lyric and Jepsen's delivery portray her in perpetual recovery from a startle. "This is crazy!" she blusters, finding equilibrium on the down note and in that breathless qualifier. She's the girl in the rom-com who's a little quirky and clumsy and doesn't seem like the hero's type, but who represents freedom and spontaneity and an open door to a new life. Call me maybe: I'll walk you into a different sunset.

The official video allows Jepsen to inhabit the screwball role today's ingénues often adopt as a corrective to the aggressive sexuality that more often defines them. Kesha's been here before; so has Pink and Katy Perry. Nicki Minaj perfected the stance in "Superbass," which you could call the "Call Me Maybe" of 2011. Invoking the comic styles of earlier troupers from Jean Harlow to Marilyn Monroe to Ann Margaret, today's self-styled supervixens gain not just perspective but a certain sweetness. (Guys do this too, from David Lee Roth in "Hot For Teacher" to Dave Grohl in "Learn To Fly.")

The clip, directed by frequent Jepsen collaborator Ben Knechtel, goes back to one source of this stance. "I Kissed a Girl" by Jill Sobule got the Pee-Wee Herman treatment and featured romance novel cover boy Fabio, who gets his props in "Call Me Maybe" when Jepsen's tattooed young hunk takes on his look in a fantasy sequence. The ending of the "Call Me Maybe" video also takes a Sobule-like step toward the proudly queer: after watching Jepsen perform, Hunk ambles up to the male guitarist and gives him the longed-for digits. Jepsen looks bummed, but not shocked. LGBTQ people are clearly a part of her world.

It's this twist that's taken the "Call Me Maybe" story to a whole new level as it's gone viral. The first video parody of the song was the most commercially important — it featured Bieber, his gal Selena Gomez and other kid heartthrobs cavorting and lip-synching to the track. It spawned a multitude of answer videos just like it — Beliebers or celebrities like Katy Perry jumping around in funny hats — plus tons of covers by YouTube stars from the Cimorelli sisters to the band Paradise Fears. (I like this funky one by Preston Leatherman.) These are fun, but don't extend the "Call Me Maybe" story.

What turns the tickle into a bigger statement is the bunch of videos that take up the original video's final plot point. One highly entertaining one that's getting a lot of attention was created by West Hollywood man about town Woody Woodbeck and his friends, and puts the homoerotic subplot up front. But a surprising number of "Call Me Maybe" parodies feature guys who mostly read straight (in the sexual and more broadly cultural sense of the word) getting in touch with their inner femininity, and even queerness, by falling in love with Jepsen's song.

"Were You Listening to Call Me Maybe?" takes place in a frat house bedroom. One brother catches two others cavorting to Jepsen's tune, and a back and forth ensues that incorporates increasingly homoerotic gestures. The clip ends with all three brothers dancing in a ring, hugely smiling. The more professional "Call Me Maybe Obsessed" also shows a male friendship opening up through appreciation of the song — two slacker roommates hide their love of it from each other, but over the course of several days, they can't overcome it, rejecting all else — including, in once case, a raunchily available female date — to spend time listening to Jepsen. "I wish I could run through the streets naked listening to this," thinks one at the video's start. By the end, he's still clothed, but he and his buddy are indeed running through the streets listening, arm in arm.

The counterparts to these highly scripted spoofs (there's also one of two Australian "blokes" poking fun of their own hypermasculine foibles, and one rather inept attempt at drag) are even sweeter. They show amateur kids acting out the video, hugging and mugging and mirroring the actions of the model Holden Nowell in Jepsen's video. One features the Singapore-based YouTube regular Noah Yap acting out a gently surreal version of sexual confusion at the mall. Another takes place somewhere snowy, and shows an androgynous group of pals doing yoga, throwing pillows and swooning at each other Jepsen-style.

A third — my favorite — pictures three recent eighth grade grads on a suburban lawn, acting out a literal video version of "Call Me Maybe": when she sings "now you're in my way" they run into each other; at the line "your stare was holdin," one gives the other bug eyes through his plastic spectacles. It's just adorable. And though the makers intercut insistent testimonies to the group's heterosexuality — "This is dedicated to the GIRLS WE LIKE!" — these young men are utterly comfortable acting out same-sex desire. Teaching tolerance may not have been Jepsen's intention with "Call Me Maybe," but she's given these kids a forum to learn it together.

None of these videos are particularly sexy (well, except the West Hollywood one, which is fairly adult). Like "Call Me Maybe" itself, they immerse us in freshness; and since everyone — from newcomer Jepsen herself to the boys playing at infatuation with her song and each other — is fairly inexperienced, passing judgment would seem so uncool. This aspect of the "Call Me Maybe" phenomenon gives us pause to reflect upon how often bigotry is rooted in personal pain and disappointment. It's worth it, sometimes, to try to reach back and remember what it felt like to not know somebody — or something, like a belief system — might let you down.

Right now, this gentle message feels very important. Public discourse abounds with hate speech and snap judgments as the political cycle heads toward a showdown. In the midst of such a cycle, small gestures like the responses to "Call Me Maybe" are a gift: that gift of a tickle. Wake up, be human, be happy, don't turn your back on love.