Accessibility links
Millions Of People Go By: Doug Aitken's 'Song 1' Distills City Life : The Record This spring in Washington, D.C., a piece of public art used a pop song to illustrate what binds the lives of strangers. 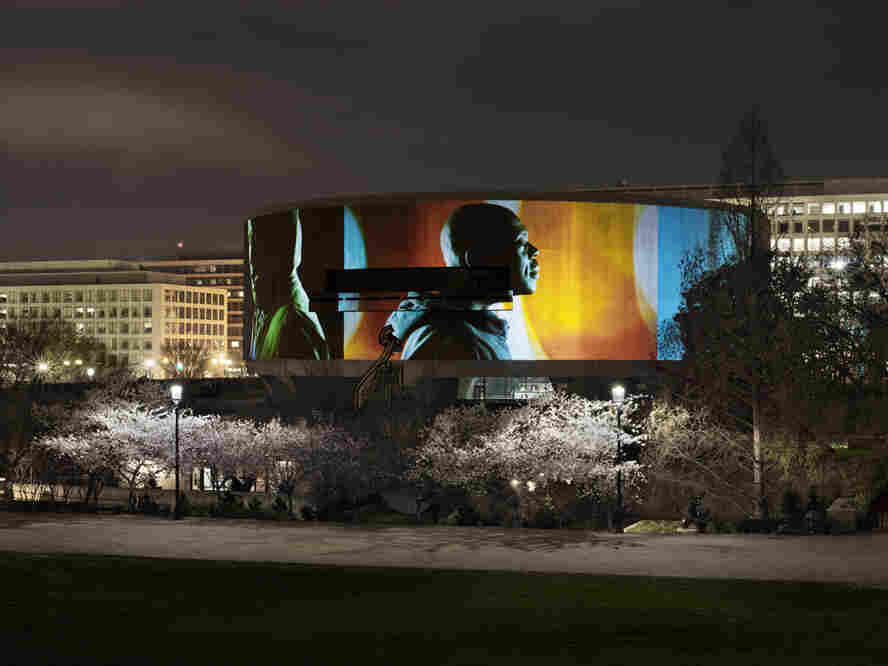 Song 1 in operation at the Hirshhorn Museum in Washington, D.C. Courtesy of the Smithsonian hide caption 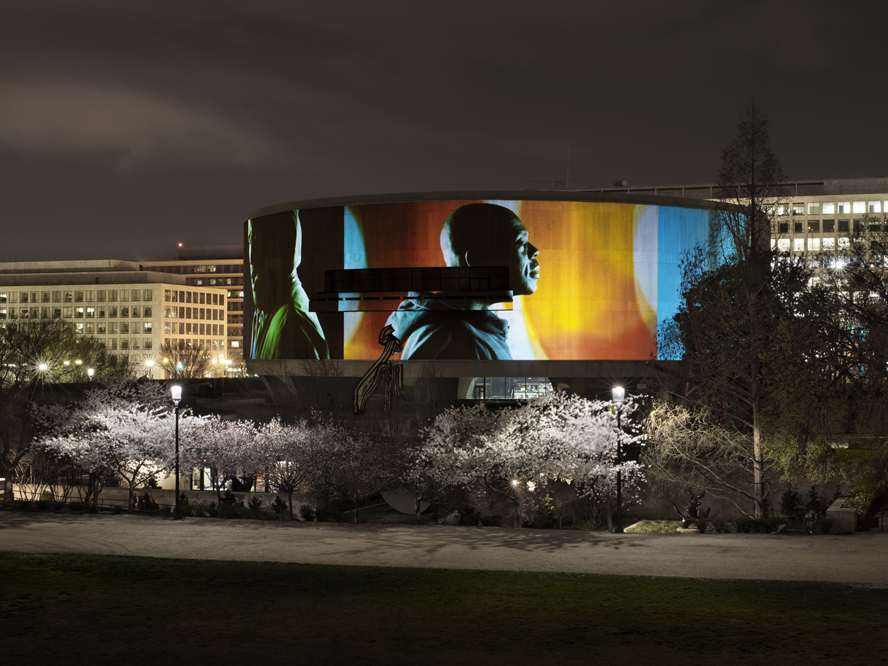 Song 1 in operation at the Hirshhorn Museum in Washington, D.C.

Courtesy of the Smithsonian

The National Mall in Washington, D.C. is a lonely place at night. The museums and monuments close to the public at dusk; nearby businesses, with no one to serve, follow suit. But if you happened to be walking in the area after dark this spring, you may have heard something striking — a familiar tune, floating above the usual nighttime static of passing cars.

Follow that sound to its source, and you'd find a bigger surprise: an assembly of giants. Projected on the circular, nearly windowless face of the Hirshhorn Museum, many times larger than life, were images of people. Depending when you got there, you may have seen the businessman first. Or maybe it was the waitress, striding gracefully with a pot of coffee. You might have seen the two dancers, flailing their limbs to a rumbling beat, or the two tuxedoed singers, snapping their fingers and smoothing their ties. Or perhaps it was the pale-faced woman in the white robe, looking over the city with a serene half-smile.

No matter which one you saw when you first arrived, you heard the same thing. As one giant vanished and another appeared, that familiar tune remained constant. The businessman, the waitress and the rest — all of them were singing along to the same song. And if you stayed a moment, you might have looked around and seen other people noticing it too.

Late in the film Magnolia, each of the central characters reaches a point of desperation. William H. Macy, hoping to fund costly surgery, decides to rob the employer who fired him. Julianne Moore, wracked with guilt now that the man she married for money is dying of cancer, lights away with his pain medication and attempts suicide. Against the backdrop of a shadowy Los Angeles, all of the players confront crises and make decisions that may change their lives forever.

And then, everything stops. The story is suspended, and for a few surreal minutes, the characters share a meta moment.

By the time Magnolia morphs into a sing-along of Aimee Mann's "Wise Up," director Paul Thomas Anderson has spent two hours filling in backstory and setting the characters up like dominoes, ready to crash together in the third act. His ultimate point: Human lives are deeply interconnected, in ways we're usually too preoccupied to notice. No matter how isolated we might feel, every action we take has countless rippling consequences on those around us. Everything matters.

The song that has played outside the Hirshhorn every night this spring is "I Only Have Eyes for You," the twinkly doo-wop ballad most famously recorded by The Flamingos. The song, and the massive projected figures who sing, speak, walk, drive and dance along to it, make up Song 1 — a video installation that has played on the building's exterior for the past two months and will close tonight. The specially commissioned soundtrack includes interpretations of the song by Beck, No Age, Devendra Banhart and others, who alternately speed and slow the tempo, distort the melody and rearrange the structure.

As the artist, Doug Aitken, explained in a press statement, "Song 1 is based on one song, what I think is a very perfect pop song. I wanted to take this one specific song and see if that could become the structure for this artwork, and if that song could be reinterpreted in many different ways and eventually create its own landscape."

Unlike Magnolia, Song 1 is non-narrative. There's no dialogue, no causal link from one scene to the next. There's no real beginning or end –- the installation runs on a loop from dusk until midnight and is meant to be happened upon in midstream. The characters have no names, no clear motivation, and inhabit what could be any American metropolis.

And yet, Aitken's point echoes Anderson's. Music transcends space in Song 1, revealing the hidden forces that bind the lives of strangers. The message, again, is that we aren't as alone as we think.

In a review for The Atlantic, Esther Yi put a finger on what is so familiar about Song 1's anonymous world. "Diners, parking lots, factories, convenience stores, stairwells, empty hallways: These are public urban spaces we know intimately, but without an anchor to specific experience," she wrote. "The same could be said for the people who inhabit them. We expect to see their nondescript faces out on the street, as part of the landscape, but we don't hold ourselves to the task of recognizing them as individuals."

So it is with city life at large. One sees thousands of people in a day, with no way of knowing if they're coming home from the pharmacy or on their way to rob a bank. A guest on the WNYC program Radiolab captured the feeling beautifully in a story about moving to New York at age 30: "It was ugly to me. Too many humans, too much concrete. One theory about autism is that the things that come into an autistic kid's brain all have equal value — they don't know how to sort through it."

As overwhelming and isolating as cities may be, they're exciting too. In exchange for the daily trial of pushing through crowds of strangers, we occasionally stumble upon people we really connect with — and when that happens, everything else gets the volume turned down. Which happens to be precisely what "I Only Have Eyes for You" is all about:

I don't know if we're in a garden
Or on a crowded avenue
You are here, and so am I
Maybe millions of people go by
But they all disappear from view

Those moments, admittedly, come few and far between. Song 1 reminds us what goes on the rest of the time. By necessity, we all gird ourselves against the crush of stories that happen all around us in daily life. That's true of the lonely giants on screen, who sing to themselves rather than engaging one another — and of the viewers below, who watch in silent reverie, barely aware of their neighbors. Side by side, people indulge private moments in a very public place.

With Magnolia, Paul Thomas Anderson cautioned that we are all inextricably linked, for better and for worse. With Song 1, Doug Aitken simply asks us to accept a paradox: Being alone is, inevitably, a shared experience.