Accessibility links
Egypt's Underground Wakes Up : The Record The music that people have been listening to since last year's uprisings rewrote the rules. 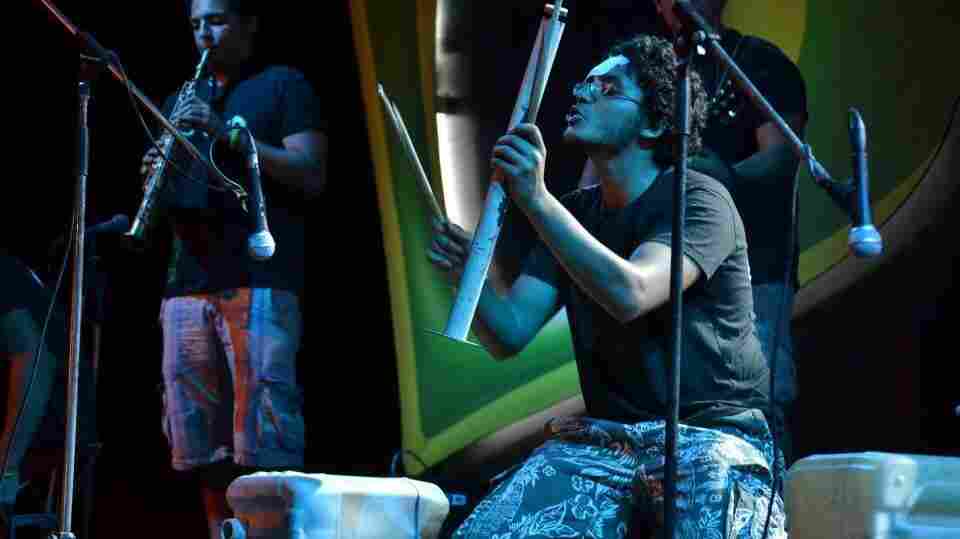 Noor Noor performs with his band El-Zabaleen, which makes many of its instruments out of recycled materials. Courtesy of the artist hide caption 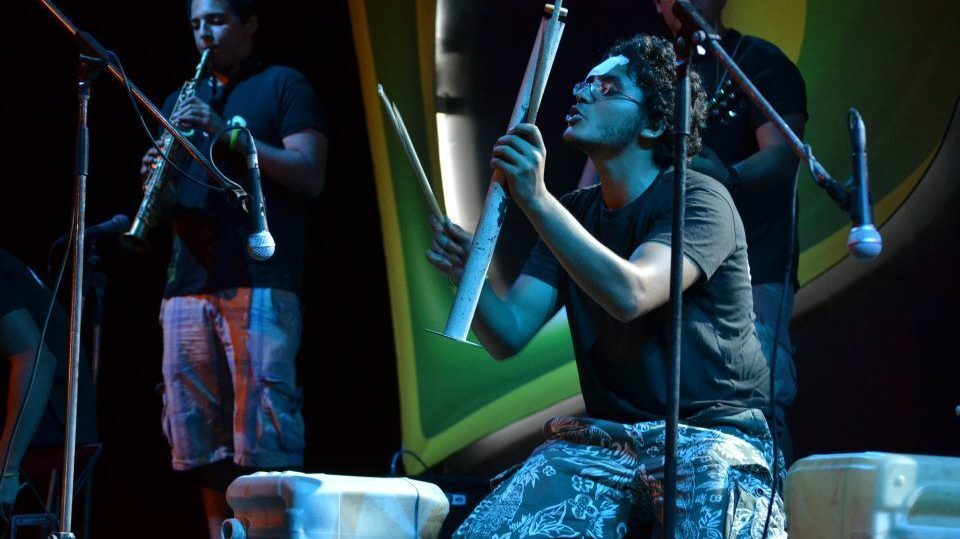 Noor Noor performs with his band El-Zabaleen, which makes many of its instruments out of recycled materials.

Throughout June, Morning Edition is reporting from North Africa. While the show is on the road, NPR Music is featuring songs that are popular in the region. Egyptian musician and activist Noor Noor helped us make that mix. Click on the audio link on this page to hear Noor Noor talk to host David Greene about how Cairo's music scene has changed in the year since the Arab Spring.

Last week, Egyptian activist and musician Noor Noor tweeted a photo of his hands, covered in bandages. He wasn't badly injured; in fact, the tweet included a smiling emoticon and read more like the proud display of a battle wound.

In a way, it was: Noor had broken three drumsticks playing at a march to Tahrir Square, trying to initiate what he calls "freedom beats." This time, he was there alone — but during last year's uprising, he helped gather many drummers during protests to not only keep the beat of the marching and chanting, but also to keep spirits high among those demonstrating.

Music played an important role in both reflecting and energizing the Arab Spring, but the artistic landscape of North Africa continues to flourish in the year since the revolution. One sign of this is that artists are expressing themselves in ways that may have been dangerous under the previous political regime.

With less fear of repercussions, musicians have started to address political and social issues more explicitly in their work—both in lyrics and performance. For example one of Noor's four rock bands, El-Zabaleen, makes its instruments from recycled materials as a way of promoting a message of environmental support. The hip-hop group Arabian Knightz raps about women's rights in the song "Sisters." Radio and television rarely recognized such overt activism in music before the revolution, but now artists who had been locked into Cairo's underground music scene are edging their way into the spotlight.

Social media and fewer technological restrictions mean better access to this music, too. Even without record deals or recording studios, musicians can post demos and live recordings to YouTube. Fans find music online and at concerts, and share it surreptitiously through flash drives and CD-Rs. This has been going on for years, but now that people are paying closer attention, Noor says, people will hear music from Egypt's underground scene in more places than ever — all over North Africa.

Still, commercial pop continues to dominate most outlets. Turn on the radio — NileFM, Cairo's largest English-speaking radio station, for example — and don't be surprised when a song by Rihanna or Justin Bieber pops up alongside Egyptian pop stars Amr Diab or Tamer Hosny. Tunisia's Mosaïque FM divides its airtime between Arabic and international pop hits, programming heavily from the same Billboard charts that American stations use.

But, Noor says, "I strongly do believe that the underground — or alternative — music scene will be gaining some ground."

If you don't speak Arabic, "Ya El Medan" will sound like any emotional pop ballad. But the video, with images of bullet-ridden clothes, blood on a physician's coat and protest flyers, carries a deeper message. The lyrics directly address and personify Tahrir Square as another living, breathing member of the opposition: "In you we sang, in you we frayed / We fought our fears and then we prayed." The song is meant to "remind people of everything that has been scarified," Noor says. "There's still a revolution to be continued."

By combining the music of international subcultures with traditional Arabic sounds, some bands make their work more accessible across borders. Wust El Balad is one of the few acts that have been together for more than a decade, making music that fuses Arabic lyrics with American rock music, while using both Western and Middle Eastern instruments. Noor sees Wust El Balad as one of the strongest examples of an underground band that is seeking to shift media attention away from Egyptian and Lebanese pop stars, whose music is still the most prominent on the radio in North Africa.

Perhaps the fastest-rising genre out of Cairo's underground scene is a type of dance music called "electro-sha'bi." "Sha'bi" roughly translates to "of the people," and this music originated in working-class communities as message-oriented songs. In recent years, wedding DJs, drummers and MCs have taken sha'bi elements — fast, driving rhythms and street-style chanting and singing — and combined them with hip-hop, dubstep and electronic beats. Once primarily heard at weddings in Cairo's poor neighborhoods, electro-sha'bi has lately found its way to audiences of many different backgrounds, via the radio and a few nightclubs in Egypt. "That in itself was a significant change," Noor says.

Authentic Egyptian Music Is From The Streets Oct. 4, 2011