Accessibility links
Adulthood Can Wait: Why Justin Bieber's 'Believe' Works : The Record Believe, the teen idol's new album, has been greeted as his first public step toward full-fledged manhood. That's a mistake. Girls need Bieber more than grownups do. 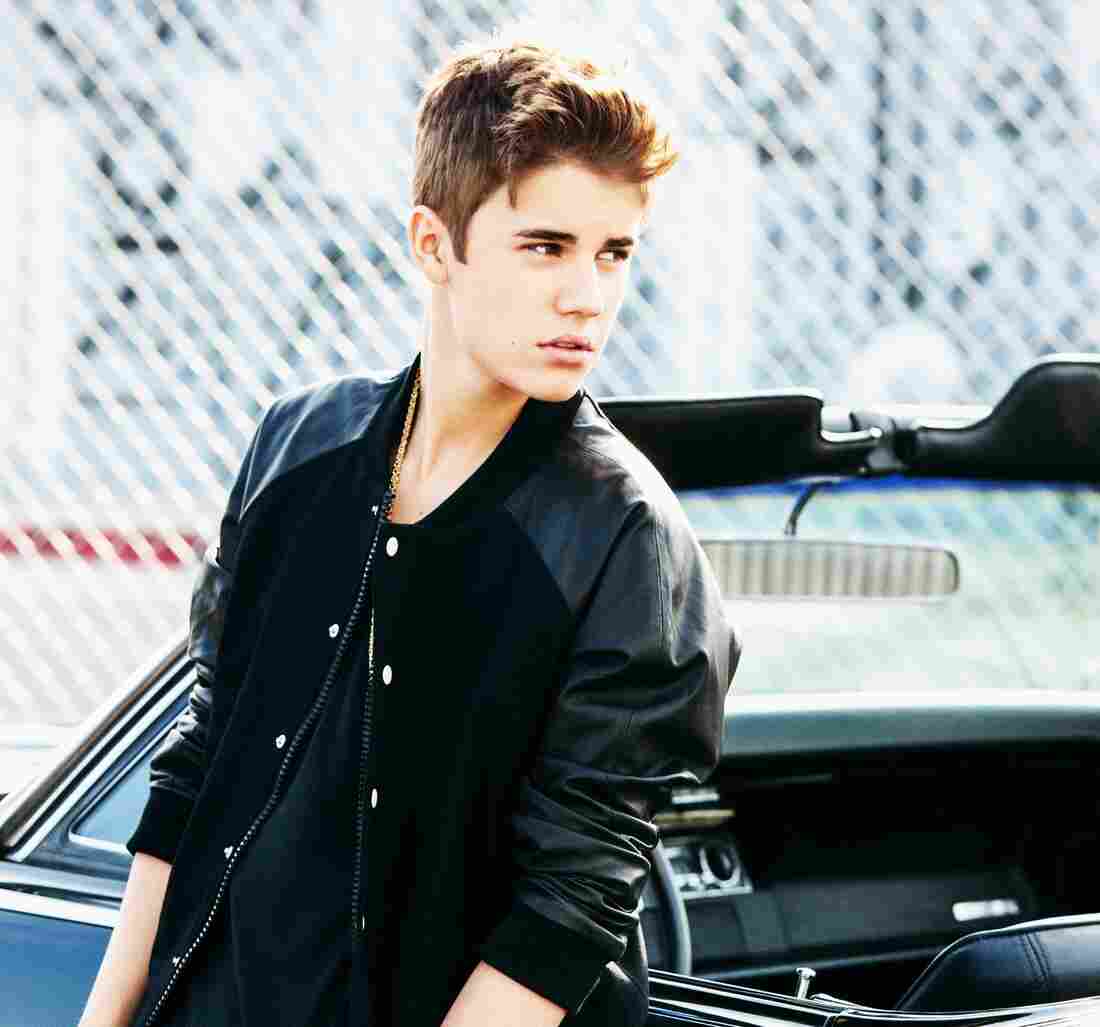 He's Only Eighteen: Justin Bieber's new album, Believe, is his fourth to hold the No. 1 spot on the Billboard album chart. Ben Watts/Courtesy of the artist hide caption 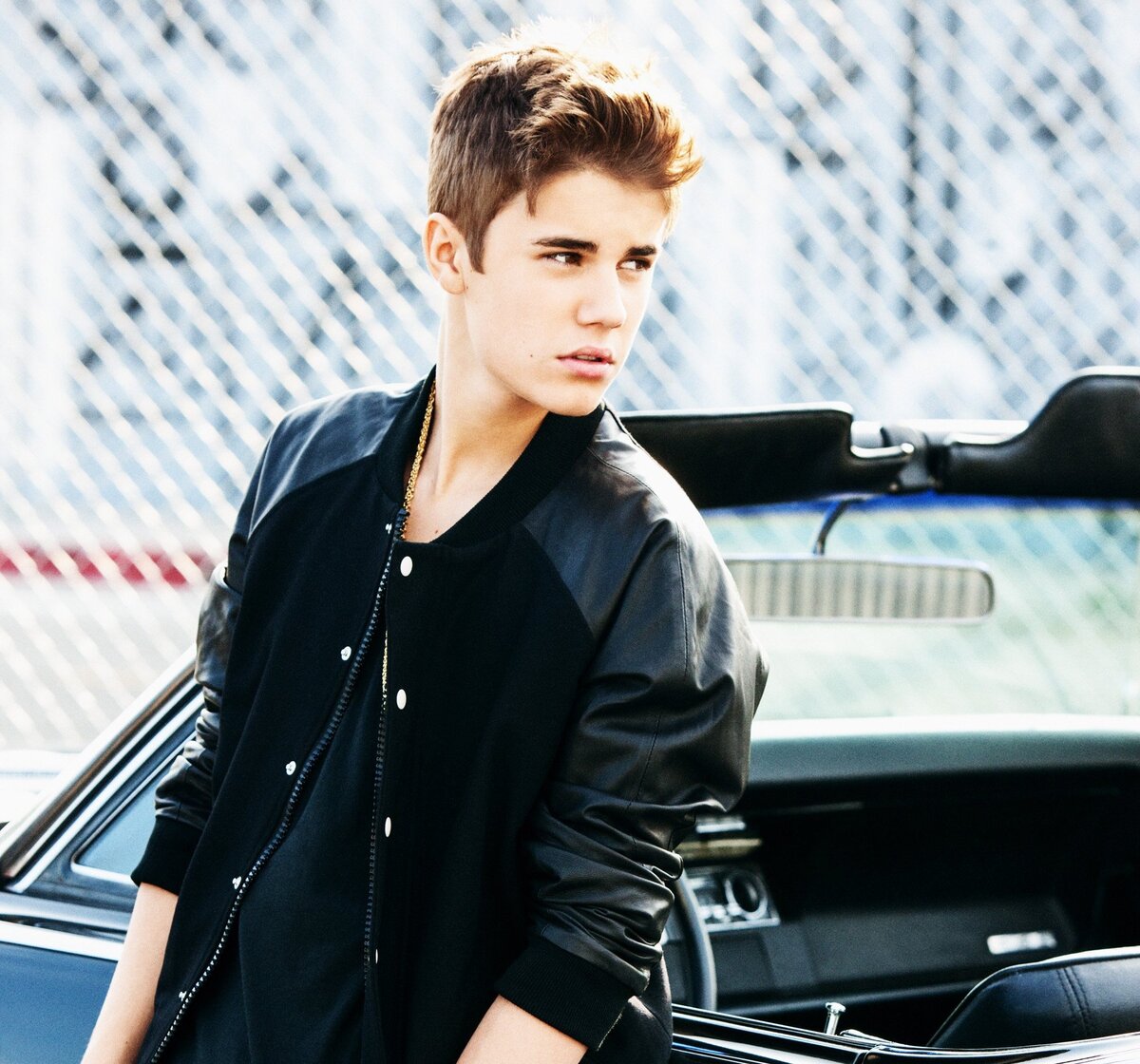 He's Only Eighteen: Justin Bieber's new album, Believe, is his fourth to hold the No. 1 spot on the Billboard album chart.

The way people are talking about Justin Bieber's newly minted No. 1 album, Believe — and the transition into adulthood it's meant to represent for the young star — you'd think that he were being prepped for a monarch's throne or the Dalai Lama's robes, not a long career in pop. From the gossip to the notable amount of critical kudos he's receiving this round, the Bieber chatter right now reveals an intense concern about whether this Superboy, granted his powers by pubescent girls, can fly with the big boys.

The relentless tabloid speculation about whether Bieber has experienced certain adult pleasures has culminated in a GQ profile in which the author, Drew Magary, manically attempts to get the not-yet-U.S.-legal Bieber to drink beer (preferably in a strip club). More thoughtful critical assessments still assume that what this YouTube prodigy really wants and needs is to make adult music that establishes him as the equal to his mentor, the now firmly lascivious and artistic former teen star Usher, as well as the two other former 16 magazine pinups who managed to escape the clutches of bobby soxer love: Justin Timberlake and Michael Jackson.

These responses to Believe assume that Bieber wants to leave his Peter Pan past behind, and that's not unreasonable. "Scooter Braun was very proud of this being An Album—there was definitely rhetoric about this being not just "fluff," but art," wrote Village Voice music editor Maura Johnston about attending a Believe listening session hosted by the singer's manager; that's how forcefully this moment in the star's relatively short career is being framed. Bieber's only eighteen and this is only his third studio album; the Jackson 5 released thirteen before Michael began his full-fledged solo career with Off The Wall in 1979. (He was 21.)

We shouldn't be in a rush to cheer him into full-on adulthood, just as we shouldn't forget that girls deserve to have someone sing directly to them. (Bieber observers find his fans fun and sweet, but rarely treat them as more than a novelty.) Both Timberlake and Jackson made sophisticated music aimed primarily at young women before they set their sights on the adult music. Teen music can be memorable, and Believe is worth considering in that light. Instead of searching for lasciviousness in songs like the slightly sultry "Boyfriend," enjoy the delicacy and, yes, innocence that dominates the rest of the album. "Die In Your Arms" dreams of doo-wop as a light petting session. "Fall" makes a high school hallway confession worthy of church. Inching toward explicitness, Bieber gracefully deflects: "Hop up in the bed ... if you like to snooze," he murmurs in bonus track "Love Me Like You Do," turning a come-on into a cuddle. The pleasure of this music is the way Bieber avoids going all the way, his fluid singing all inference and delayed gratification.

Yet, perhaps out of fear of girls' fickleness or hunger for an audience with more purchasing power (especially via mainstream radio, which really doesn't have a place for child and teen stars) Bieber's being pushed into manhood like a frat pledge during rush week, forced to guzzle Jack Daniels and demonstrate his prowess with a purchased date.

This is not necessary! All evidence actually suggests that Bieber's doing fine on the path toward maturity. His relationship with Disney-approved girlfriend Selena Gomez seems respectful and utterly normal; his Richie Rich indulgences are sometimes silly but never even remotely transgressive. He's no Lohan; he's not even a Jonas. When, in GQ, he called himself "a swaggie adult," it reminded me of my daughter calling herself "a little teenager" at age 6.

Here's the thing about growing up: despite common child-development rhetoric, it's not really a series of leaps. Instead, it's a bunch of circle-backs, full of precocious moments and ones that seem regressive. A grade schooler might go directly from a state of remarkable composure to an attack of the sillies that has her running around screaming FARTS! at the top of her lungs. A young adult can make momentous decisions with total clarity, getting married or joining the military or agreeing that Nicki Minaj should add a lewd guest rap to a record that had better do gangbusters at Wal-Mart, and still do dumb stuff like giving an interview in a fake accent or showing off his knowledge of "the Sixteenth Chapel."

What a great teen idol does — and Bieber is one now, no matter whether he proves himself as talented as Timberlake or as deep as MJ — is to turn the delicious and painful ambiguity of youth into gently complicated communiqués that respect both the desire to rush into adulthood and the need to hang back. The imaginary space the teen idol creates may be safe, but it's not free of problems. Processing problems is part of what this music does.

Believe would not be as good as it is if it were a truly adult album, nor would it play to Bieber's greatest strength, which Rolling Stone reviewer Jon Dolan rightly identified as his light touch. What's still teenage about Believe is the tone Bieber has achieved now that he's lost his childlike yelp but still can groove in his upper register. Engaged but not pressuring, feelingful but never really avid, Bieber sounds like a comfortable kid. He's smooth and supremely confident, for sure, but in that slightly surprised way that makes some boys delightful: everything that goes his way is thrilling evidence of his bright future, whether he's (always) getting the girl or (more rarely) showing off his swaggy lifestyle. His strengths only make him more relaxed.

This is the fantasy that Bieber's core audience of teen girls crave as they start to deal with real boys who aren't as good at modulating their appetites. Needless to say, most of pop music is much more aggressive than what teen idols offer. So is much of life. Bieber's youngest female fans are just beginning to comprehend the fact that for the rest of their lives, they'll likely feel pressure to look and act in ways that present them as accessible to and eager for male attention — attention many will desire, but maybe not in the ways it comes to them. His older ones are already dealing with this idea of "sexy" that dominates the world around them even as many adults ask them to repress their real sexual stirrings. Bieber's engaging sangfroid allows them to imagine an intimacy that, while acknowledging sexual connection and the emotional unrest it can provoke, brings no real danger or discomfort.

Isn't this what all male teen idols do? Surprisingly not, these days. One Direction, Bieber's boy-band rival, comes off like a bunch of yell kings armed with really excellent, parent-friendly cheers. Upstarts The Wanted are just a little creepy; "Glad You Came" contains the Rohypnol hint of a line, "Have another drink, drink it if you can." Chris Brown's real-life nastiness has forever tainted his ability to do what Bieber does. Most Nickelodeon and Disney stars are at least half comedian, playing up their awkwardness and hormonal hysteria. Greyson Chance is out there somewhere, being sensitive. But for the most part, Bieber has this ground to himself right now.

I hope he stays there, even as he continues to make mainstream-eclectic music that shows his talent for sampling from the Top 40: EDM, Rihanna-flavored island jams, Taylor Swift style power ballads, Drakean hip-hop, and, sure, R&B. The girls need him more than the grownups do. Yes, someone recently slapped him with a paternity suit, and he (co)wrote a song about it, but "Maria" feels forced, while so many of the other songs on Believe feel calm and natural. I'm sure Justin Bieber's lived reality is far from simple. I'm more interested in the way his music helps girls negotiate their own ups and downs.

I was playing Usher's "Scream" in the kitchen the other day. "He's pushy!" declared my daughter. "He's always telling her what to do." And then there's Bieber. "If this is a lesson, then baby teach me how to behave," he pleads in "Die In Your Arms." Let's hear it for the boy who asks, the boy who has probably gone to third base and beyond (a year is a long time for two gorgeous young people like Bieber and Gomez to stick to holding hands), but isn't going to broadcast that fact. The teenage Justin Bieber has some class, manufactured or not. Why should he run away from that?