Accessibility links
How I Learned To Stop Worrying And Love LCD Soundsystem : The Record What happens when the person you hold responsible for everything that's wrong with music ends up being your hero?

How I Learned To Stop Worrying And Love LCD Soundsystem

How I Learned To Stop Worrying And Love LCD Soundsystem 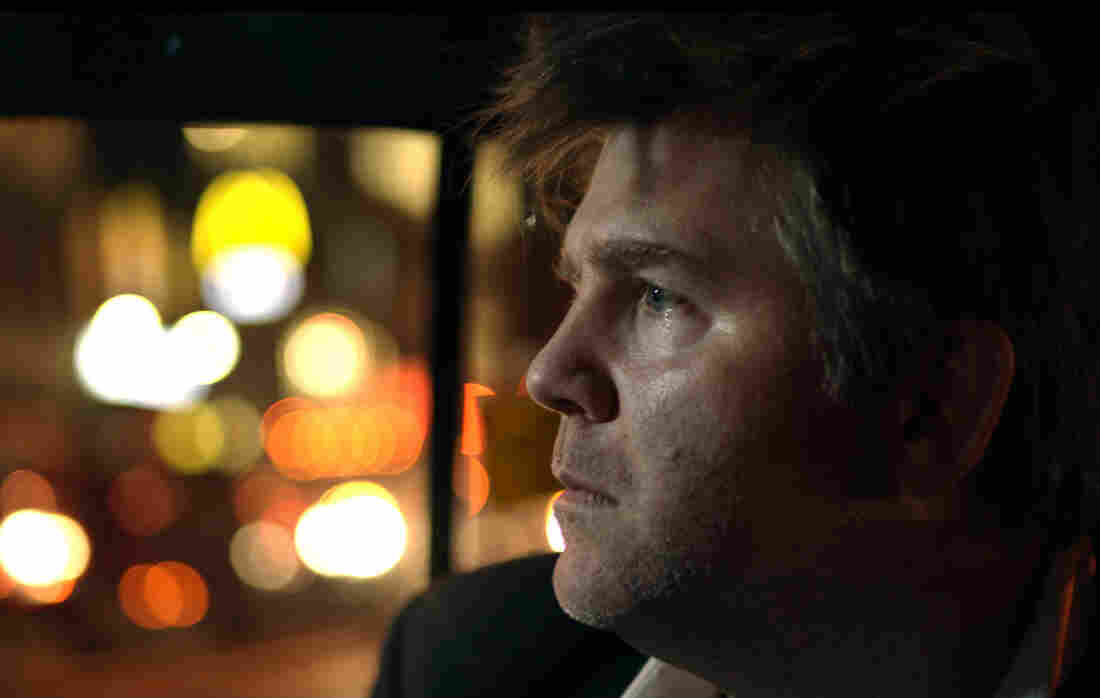 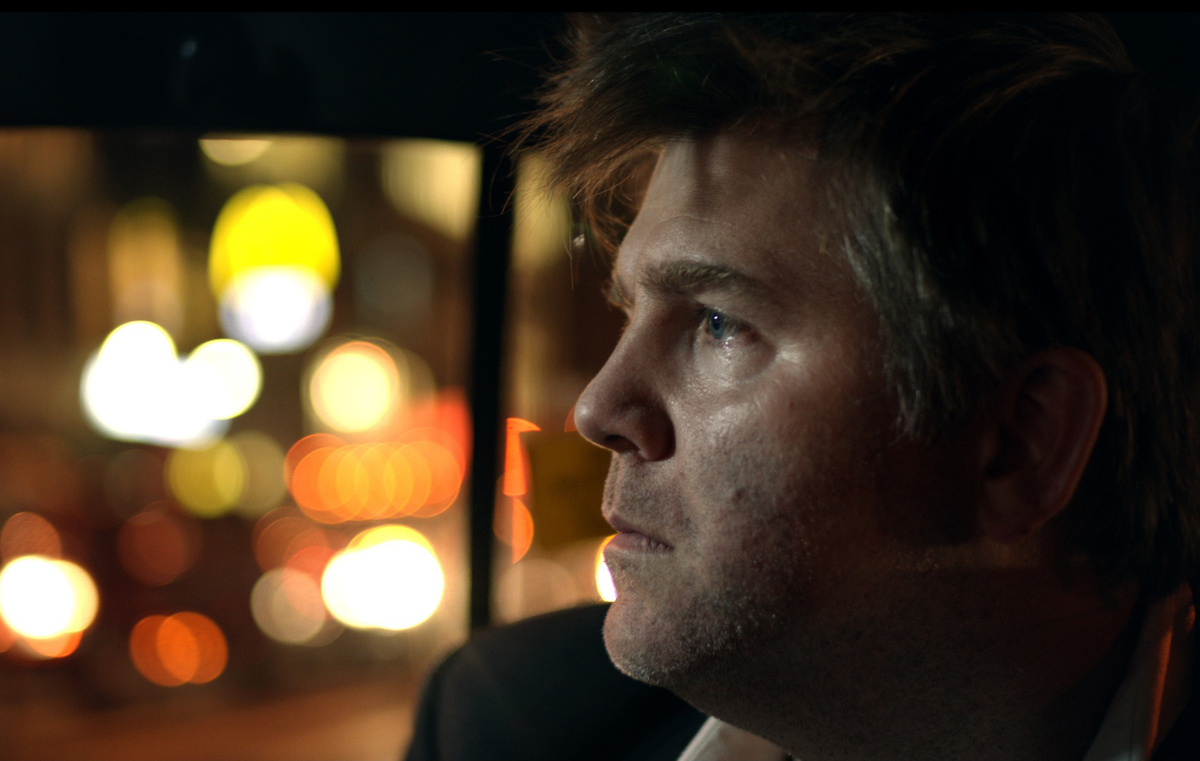 LCD Soundsystem was the first band that made me feel like an old fart. The group surfaced in the summer of 2002, the year after I'd turned 30 and had given up drugs and alcohol, capping off a decade of constant disco dancing and concert-going. My stamina wasn't what it used to be, and an alarming degree of jadedness was setting in. For the first time in my life, all the new Next Big Things were feeling very old-hat. The hot club records were actually remixes of records I'd already danced to in the early '90s. The Village Voice heralded new scenes in Williamsburg, where kids dressed like Valley Girls and danced like Molly Ringwald to music that sounded like Gary Numan. "Haven't we been here before?" I huffed, without irony, and quicker than you can say "wizened disco bunny," I was home alone, playing my old house records, pissing on the so-called "music of today" and pining for the good ol' days.

I was particularly nasty about LCD Soundsystem, whose farewell concert is documented in the film Shut Up and Play the Hits, which plays theaters nationwide tonight for a one-night engagement. As a gay man, I felt I had good reason to hate the band and its leader, James Murphy. He was a heterosexual indie rocker, and he distinguished his band as "disco," which I took very personally, because I felt he was co-opting a heritage that was rightfully mine. It was bad enough that Guiliani had shut down all the great gay discos that I'd danced in, but now this Murphy leech seemed to be fronting an army of trucker-hatted interlopers who preached the gospel of "I Feel Love" and Larry Levan and classic Chicago house. Straight hipsters used to follow brainy Detroit techno and systematic drum 'n' bass, but all at once these kids were hosting the best dance parties in the city, while I stood in gay bars listening to yet another batch of Destiny's Child remixes? I was livid!

Still an obediently in-the-know New Yorker, I bit the bullet and actually got around to actually listening to an actual LCD record: the band's first single, "Losing My Edge." It began with a blast of feedback ("Gee, guitar on a house track — how novel," I internally deadpanned) before locking into a decent 4/4 beat. Instead of singing, though, Murphy delivered a bone-dry monologue about trying to stay hip and falling out of touch while an inevitably younger gang of rivals rushes up from behind: "I'm losing my edge to the kids whose footsteps I hear when they get on the decks ... to the art-school Brooklynites in little jackets and borrowed nostalgia from the unremembered Eighties." It was like having an old friend soften a petty resentment by telling you, "Look, dude, I totally understand and feel the exact same way ... " 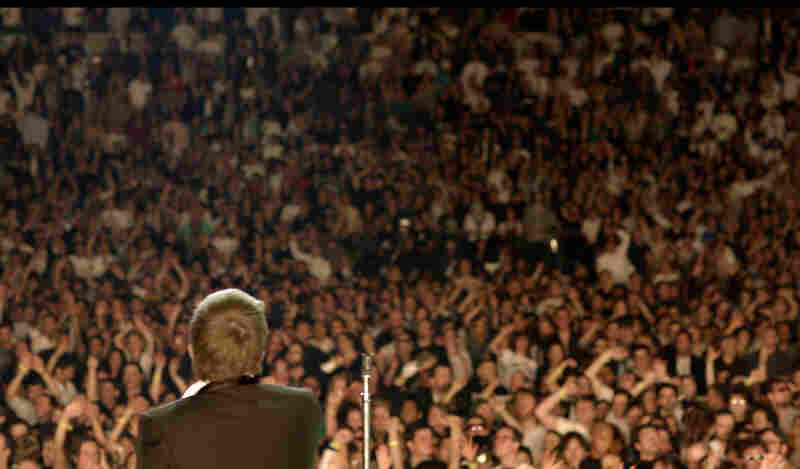 A still from the film Shut Up and Play the Hits. Oscilloscope Laboratories hide caption 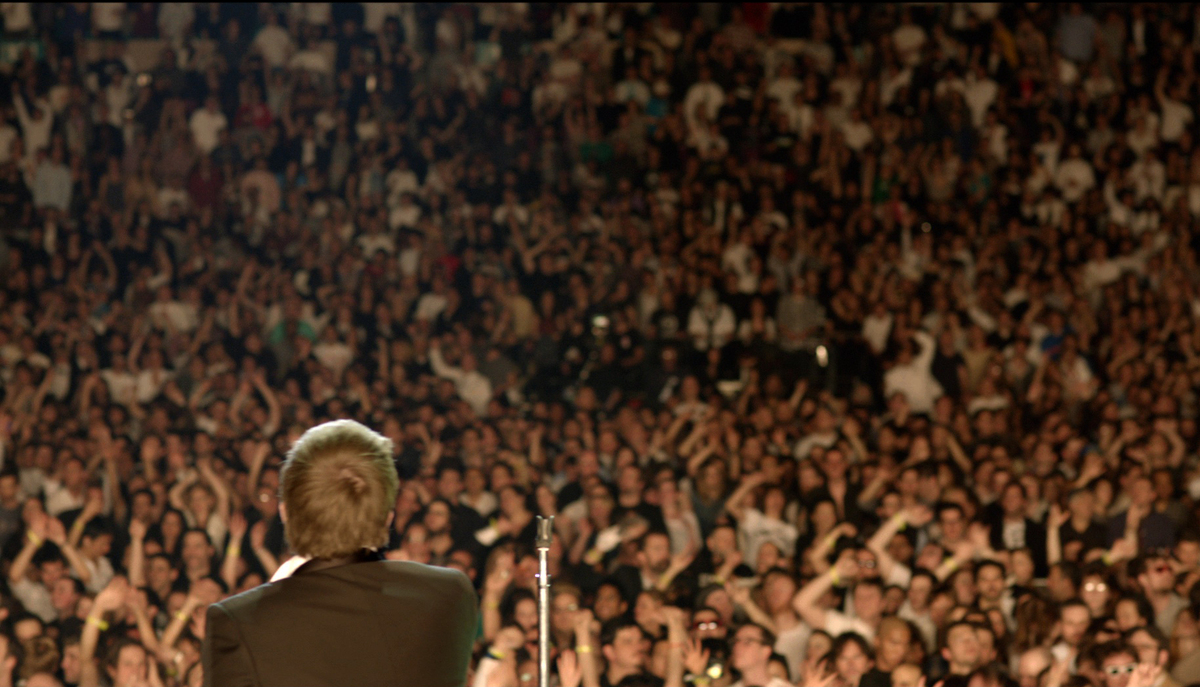 A still from the film Shut Up and Play the Hits.

Grudges are hard to completely let go of, and when LCD's self-titled first album appeared, I still dismissed it as having "its moments" while ultimately sounding "derivative," despite how songs like "Too Much Love" directly addressed my disco disenchantment ("it's all the same when it's morning, and you're boring, still ignoring everything") while still making me dance. But my connection with 2007's Sound of Silver was undeniable. It mirrored my premature midlife crisis ("All My Friends"), my mother's unexpected death ("Someone Great") and the detachment I felt living in an increasingly gentrified Manhattan ("New York I Love You But You're Bringing Me Down"), all of it over ace rhythms that, as Murphy sang, "makes you want to feel like a teenager/until you remember the feelings of/a real-life emotional teenager/then you think again." Suddenly, the whole dancing-to-records-at-home-alone thing made me feel like more than just an old fart. I was a wise, self-aware and very proud old fart.

If I still clung to some last-ditch belief that Murphy was some flyby opportunist with a suspect disco pedigree, my doubts were quashed for good with FabricLive.36, a simply fabulous mix-CD Murphy created with LCD bandmate Pat Mahoney. It offered cult classics (Peech Boys' "Life Is Something Special"), super-obscure surprises (Punkin Machine's "I Need You Tonight") and exemplary modern house (Still Going's "Still Going Theme") — everything a wizened disco bunny like myself could hope for — and clearly the man who made it loved disco as ardently as I did.

My transformation from Murphy hater to Murphy disciple was complete in 2010 — just in time for LCD's swan song — after reading an item in New York magazine that said Murphy got down on his knees in the middle of an LCD show and begged the crowd not to download their recently leaked and forthcoming album, This Is Happening. It was already on my iPod, admittedly, but on the day of its release, I make a point of driving to the record store to buy it on CD, to prove to myself, as much as Murphy, that I really cared. I hadn't done anything like that since I bought Bleach and Incesticide, just so people would know I wasn't some fair-weathered Nirvana fan who only liked Nevermind.

Sometimes I feel like the scene I should've really been upset with was the gay community, which, at some point, seemed to forsake its disco legacy in favor of tireless, Top 40 diva worship. These days, I find little inspiration in a 53-year-old woman who desperately tries to make me dance by flashing her boob and calling herself a "Girl Gone Wild." But a 42-year-old guy who actually gets my aged butt wiggling by flashing his medical slips and admitting that he broke up his band at the height of its popularity because he really wants to settled down and start a family? Sorry, Madonna, but James Murphy is my new disco hero.