Accessibility links
Nashville's Love For Lionel Richie Runs Deep : The Record One of pop's greatest crossover artists, Lionel Richie's latest album is a collection of his biggest hits sung as duets with some of Nashville's biggest stars. It's the biggest-selling new album of 2012, but a quick look at the charts shows there are plenty of other country songs made in his image. 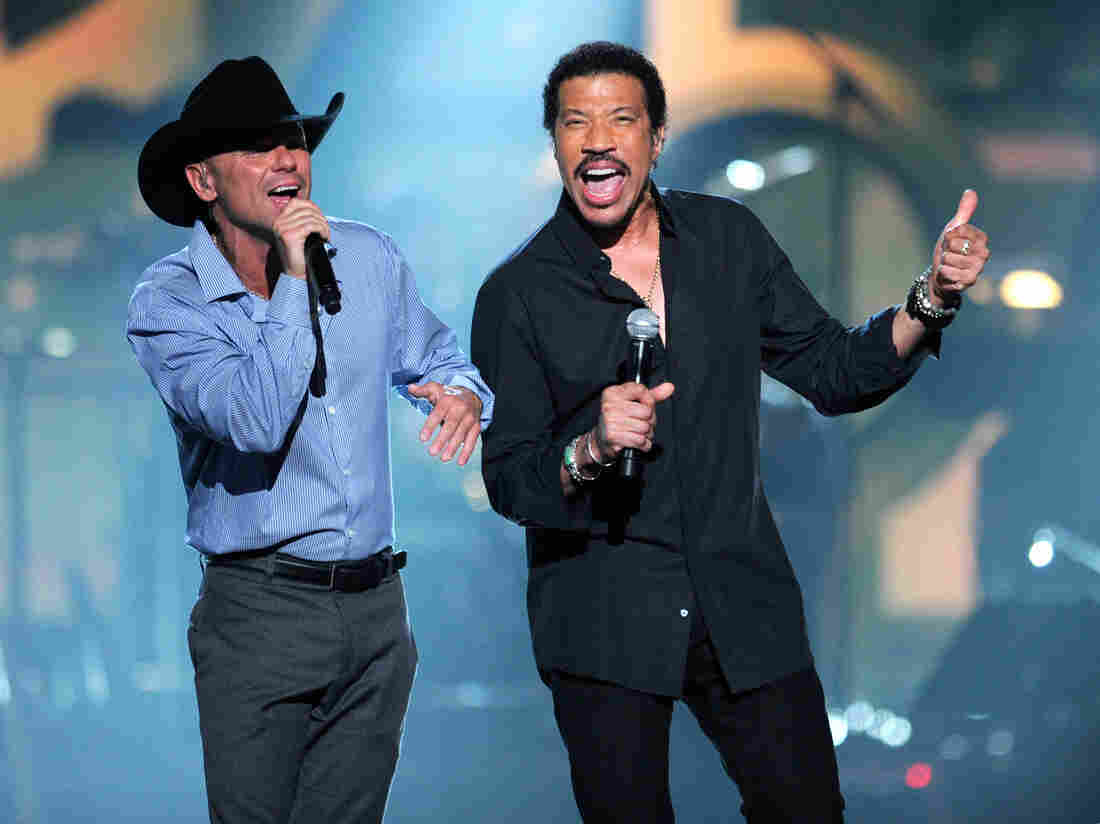 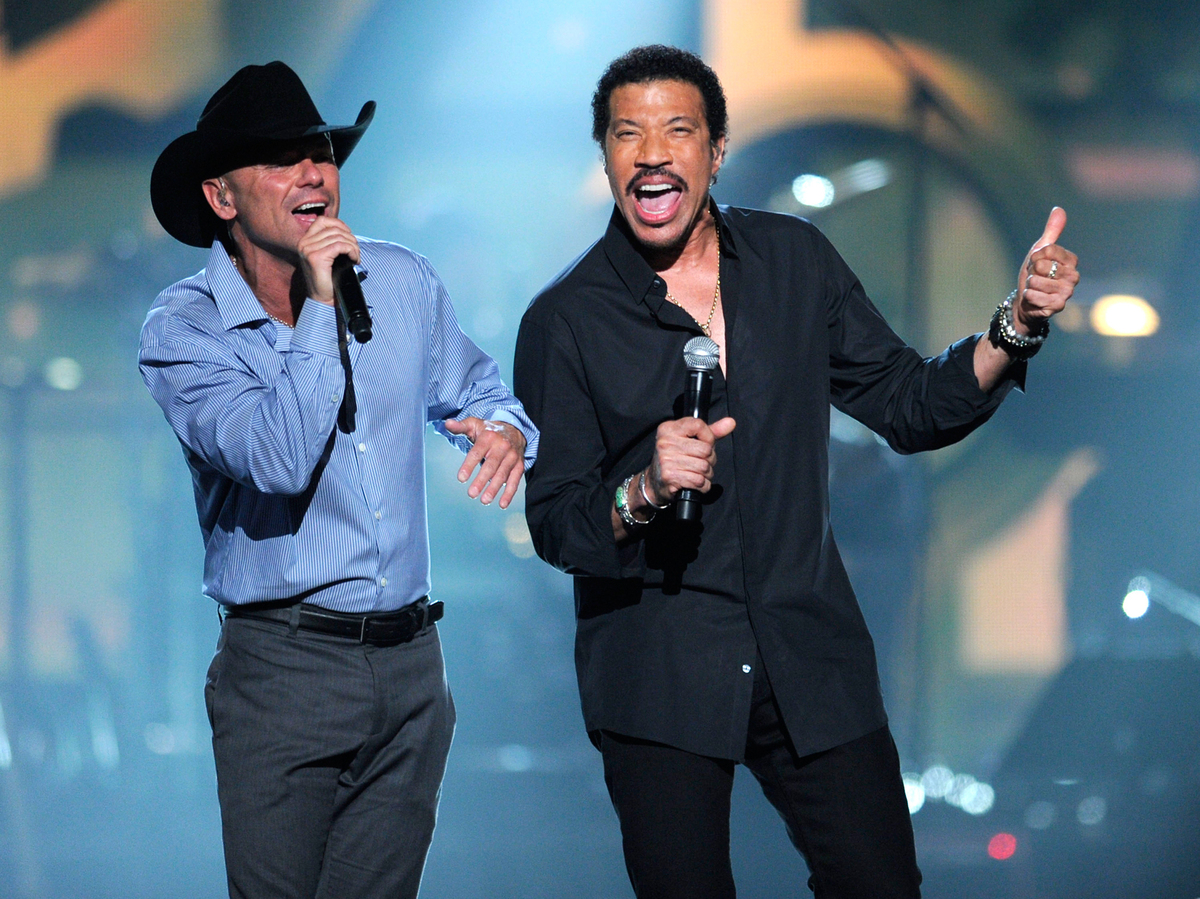 As much as it belongs to Frank Ocean and Jack White, 2012 is the year of Lionel Richie. From the trendiest kids walking the R&B/indie rock tightrope to the mainstream stars who slap dance beats and hip-hop breaks onto soul and country No. 1s, the goal for so many these days is to wiggle out of pigeonholes and grab the widest listener base possible, and Richie has always exemplified the art of the crossover.

From his hits with the Commodores to his remarkable solo career, he's incorporated elements of semi-classical, Latin disco, L.A. studio rock, and of course, country music. So it's no surprise that Richie's late-career triumph has him traveling to Nashvillle, today's most hopping lab for pop crossover experiments. 21st century country music flourishes by making connections to everything from alternative rock to reggae to hip hop, building on a past that's less about staying down home than taking a trip (the fine new compilation Country Funk unearths some gems from an earlier experimental era.) The fearlessly adaptable Richie is like a patron saint in this world, and his time there has paid off: Tuskegee, his album of duets with country's biggest names, is the best-selling 2012 release of the year so far.

Most reviews of Tuskegee dwell on Richie's Alabama roots and his 1980 collaboration with Kenny Rogers on "Lady," which fully merged country balladry with adult-contemporary yacht rock. But there's no need for Richie to prove his Nashville bona fides — in fact it's Nashville that's flaunting Lionel-inspired cred. It's evident all over the country Top 20. Here's a little playlist that illustrates how the Spirit of Lionel infuses so much of Nashville's current sound.

Five Country Hits With The Spirit Of Lionel Richie

Sentimentality plays a major role in both country music and adult contemporary music, but historically, it has a different flavor in the former. Country heartbreak is often about the gap between two people — the failure of a man to grasp the needs of a woman, or of a woman to tolerate the faults of a man. This recent No. 1 country song by Brantley Gilbert (whose hip hop-flavored co-write "Dirt Road Anthem" made Jason Aldean the poster boy for a new kind of country crossover) is way closer to the therapist's couch than the honky tonk; he even repeated admits that his lost love is "my best friend." This kind of sensitivity is very Lionel.
Richie Reference Point: "Truly." This song would mash up perfectly with Lionel's 1982 debut solo single. 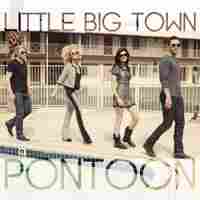 Richie is the king of making googly eyes at a lady, but he also has a devil-may-care side that's all about the drift. In Commodores classics like "Easy" and "Sail On," Richie turned the blues into an occasion for sensual relaxation and possibly some self-indulgence. The newest single from the boy-girl quartet Little Big Town doesn't take part in the heartbreak side of those songs, but its casual, water-borne hedonism (as well as its laid-back funky rhythm) would have fit in on a Commodores album like Midnight Magic.
Richie Reference Point: "Sail On." Good times never felt so good.

Kenny Chesney is the 21st-century Nashville version of the 1980s Lionel Richie. He's a massive star who specializes in highly accessible, emotionally florid songs that defy his home genre's conventions, and he gets no critical respect. It's no shock that Chesney and Richie are friends, or that Chesney apparently begged Richie to appear on Tuskegee. But it's not just the yacht in his new video that makes "Come Over" so very Lionel; it's the way Chesney reins in any tendency toward twang on the chorus, instead going for a controlled croon that recalls Richie's most beloved weepers, from "Hello" to "Endless Love."
Richie reference point: Virtually any of the man's creamy seduction songs, but let's say "My Love," since that was the one that Chesney said he had to sing during his now infamous drunk dial.

This one's not so much about the song as about the video. Richie set the all-time standard for over-the-top MTV fodder with the promotional film for "Hello," which featured him as a drama instructor mooning over a fetching blind student with a mullet that exactly matched his. Inappropriate! Here, the trio Gloriana comes close to those poperatics with a clip about a military recruit who tries in vain to resist sweeping his pretty date into his arms, and thus his about-to-be complicated life. Earnest lust wins out over ethical equanimity again.
Richie reference point: "Is it me you're looking for"?

It's not a hit yet, but I'm predicting that this R&B-flavored bedroom bumper from the Georgia band with this week's No. 1 album will be flowing out of truck windows from late summer into fall. It's a little racier than most Lionel hits, but it qualifies because the chorus bubbles over with enough tropical flavor to make you think of one of Richie's biggest hits. And after all, what's another phrase for overnight? "All Night Long."
Richie reference point: Party! Fiesta!