Accessibility links
Taylor Swift, Princess Of Punk? : The Record What exactly does the country star's new single, a kiss-off to an unworthy ex called "We Are Never Ever Getting Back Together," have in common with angry punk rock? Plenty. 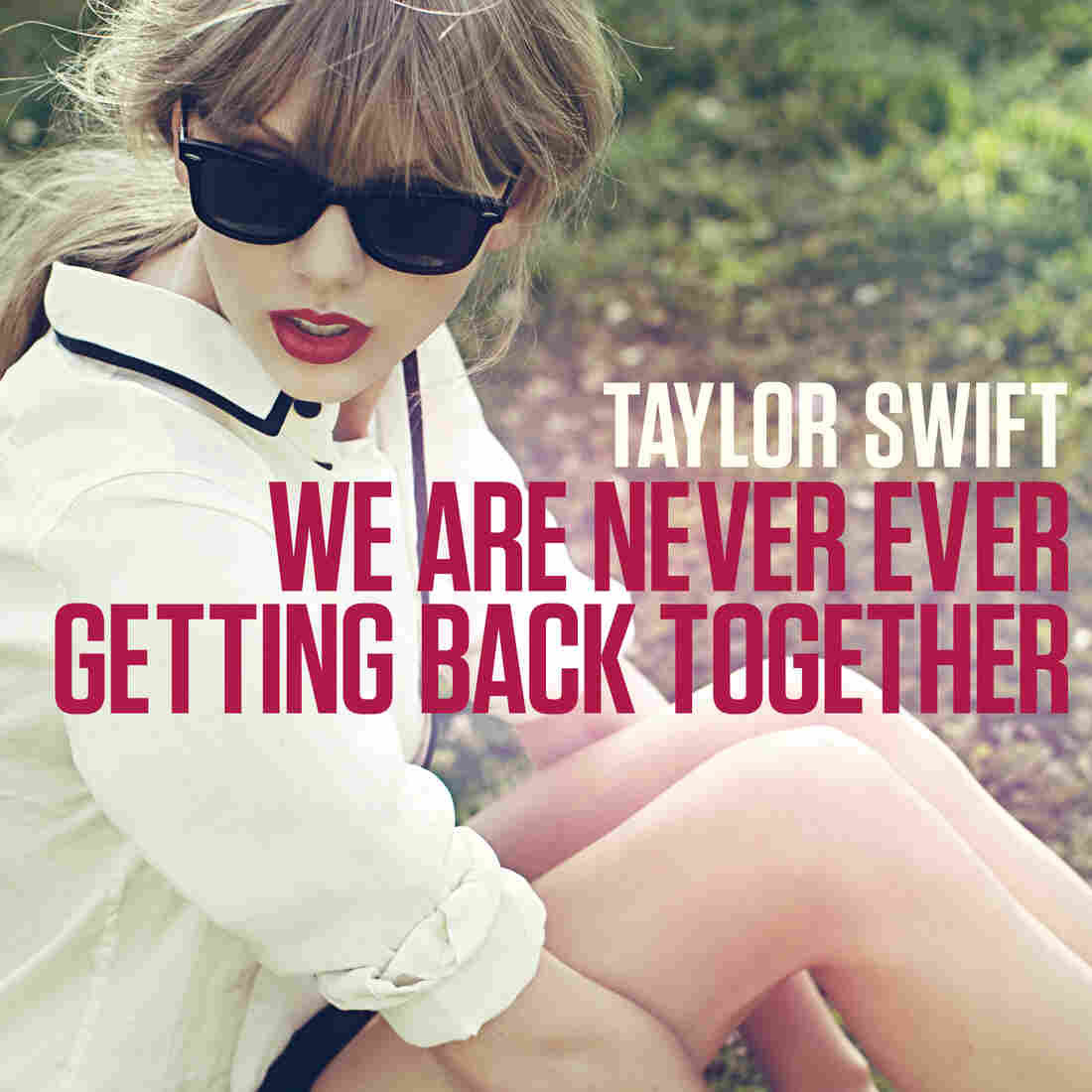 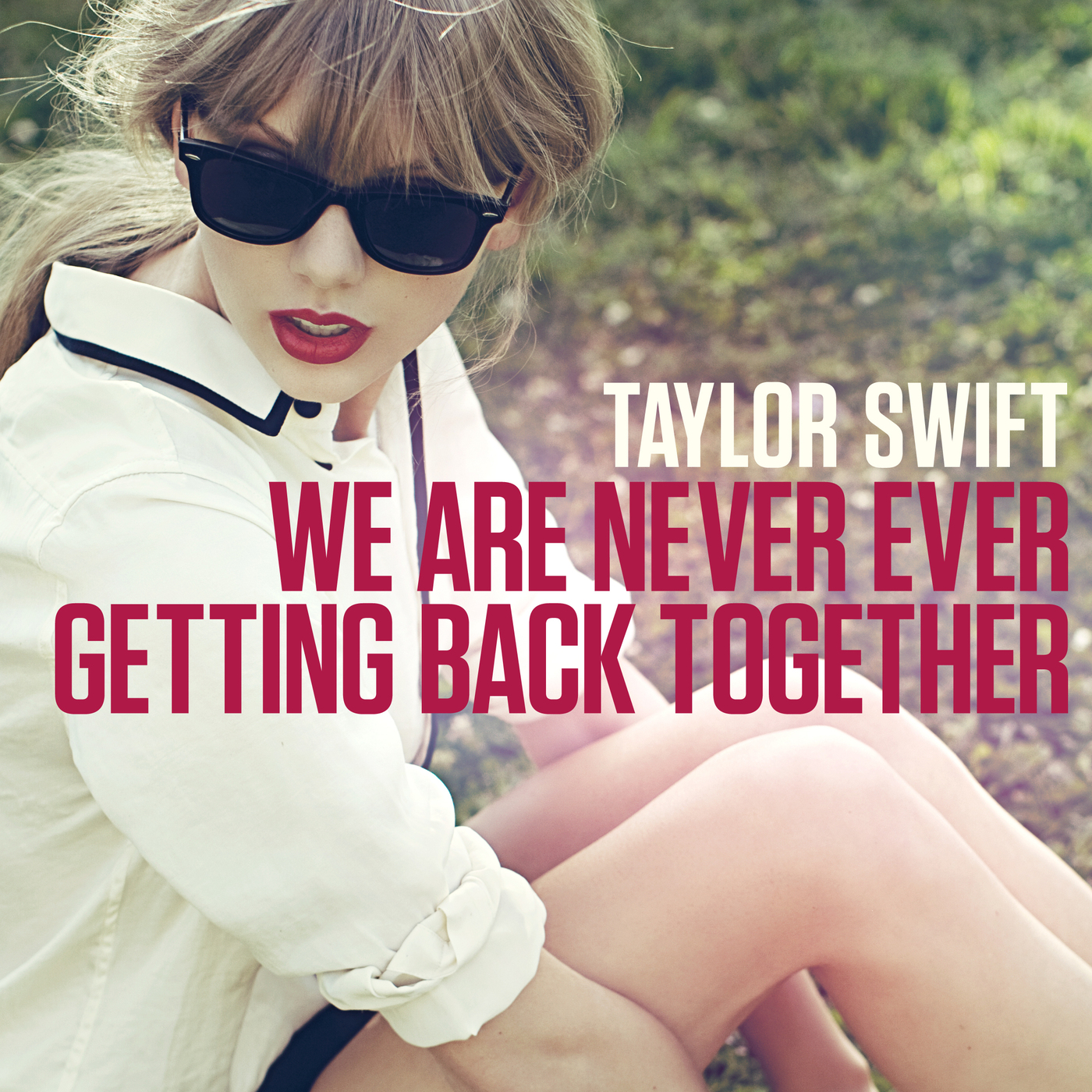 In the middle of a video she made in 2004, Kelly Clarkson gives a quick flick of her middle finger. She stares into the camera, sexy but not at all inviting. She is showing a new generation of young women not only how to step away from a bad love affair, but how to be the kind of woman who owns herself and stands apart.

Clarkson's rude gesture and the song that inspired it, the platinum-selling "Since U Been Gone," helped solidify a way of expressing women's liberation that's still dominant within mainstream pop. It's resurgent right now, within Taylor Swift's new hit, "We Are Never Ever Getting Back Together" — the biggest debut single of that young superstar's career.

"We Are Never Ever Getting Back Together" creates a mood of uplift — even joy — around emotions that are, in life, not pretty. The latest in the young post-country star's growing portfolio of breakup songs isn't earnest like "Dear John" or wistful like "Back To December" — nor is it explosive, like the revenge wails of Carrie Underwood and Miranda Lambert.

Instead, Swift's song spins sugar from spit. Its sneeringly derisive tone is rooted in its stomping four-on-the-floor beat and builds through Swift's clipped guitar strums and a vocal marked by Valley Girl-style vocal asides and a whistle-while-you-trash-him melodic hook. In other words, it's pop-punk, like a Blink-182 song. Or an Avril Lavigne song — which it could have been, had its co-writer Max Martin been working with another of the ingenues he's aided (say, Lavigne herself).

In this century, songs like "We Are Never Ever Getting Back Together" have taken that quaint 20th century form of rebellion called punk — specifically the feminist punk that took hold in the late 1970s and then was reborn through the Riot Grrrl movement in the 1990s — fully into the pop mainstream. Staring hard into the camera in their videos, today's megastars borrow vitriol from a strong lineage of cultural refusal. They've learned from punk how to make anger fun.

The key figure in this mainstreaming process has been Martin, the Swedish songwriter and producer who's as responsible as anyone for the genreless sound of the 21st century Top 40. Martin worked with Swift and another Swedish mogul, Shellback, on this particular hit, but he's trod the same ground many times. Its snappy sound embodies his conception of female defiance, formed in collaboration with many charismatic women, since he started exploring with Britney Spears circa 1998. Over the course of Martin's many co-writes, the mood and message have remained remarkably consistent, and they've allowed for a feminist tinge to fully infuse the pop charts even when actual feminist politics seem totally absent.

Though he works with some male artists, sassy women are Martin's metier. He's helped shape the sound of most of today's top non-R&B ingenues, one that blends punk's gob-flinging sarcasm with the melodicism of ABBA and that danceable yet rockish beat. Besides Clarkson and Swift, Martin, often working with another producer, has applied his formula to collaborations with Spears, Lavigne, Katy Perry and Pink. The songs these partnerships have produced really all add up to one sustained head-tossing kiss-off: "Stronger," "What the Hell," "Part of Me," "U + Ur Hand," "So What."

The women whom Martin has guided nearly all co-write their material, and they're clearly expressing a sense of self-determination that feels right to them. They have a sense of their place in history, too. These songs owe a debt to a long line of female performers whose voices have embodied more freedom than regular life sometimes offered. A playlist would have to go all the way back to vaudeville and include women's blues, Etta James, the tougher girl groups, Aretha Franklin, the queens of disco and country proto-feminists like Dolly Parton and Loretta Lynn.

It's also easy to follow this legacy into R&B, where self-defined independent women build upon the "no romance without finance" talk that's pretty much always been part of African-American music's ideal of feminine self-sufficiency. Beyonce's "Irreplaceable" could have been a Martin tune (and, indeed, a few Scandinavians were involved in its conception); its swagger is that biting. But Beyonce's grounding in hip-hop links her to forebears like Missy Elliott, whose use of nonsense rhymes was a brilliant way of talking back to patriarchal language, and no-nonsense '90s divas like En Vogue and TLC, who in turn were inspired by original back-talking rappers like Roxanne Shante. Nicki Minaj carries on this tradition, too.

Martin's template, however, specifically relies on the energy of punk. He and his female collaborators balance sentimentality and hypersexualization of the conventional female pop star's work (including other songs by these very same artists) by tapping into punk's historic refusal to play nice. The dialect Swift adopts in her new song is obviously modeled on Lavigne's perky smirk, which itself distills and dilutes a quarter-century's worth of unladylike singers: Patti Smith, Joan Jett, Deborah Harry, Poly Styrene, Exene Cervenka, Cyndi Lauper, Kathleen Hanna, Gwen Stefani, Courtney Love.

Swift's new song is almost a parody of the punk-pop form. Its frame is tight and almost oppressively intimate. At its heart is a spoken passage that replicates a phone call, presumably between Swift and a female friend, in which the singer represents her lover's voice as if he were a Cro-Magnon. The chorus is another childlike outburst: "NEVER EVER EVER! Like, ever." It's about as believable as any teen's eternal vow, though the song leaves me rooting for Swift, hoping that she'll get out of this cycle of endless refusal and just forget about the whole romance.

Though "We Are Never Ever Getting Back Together" will certainly be sung in groups by Swift's mostly female fans, making it sound like an anthem, it's really the opposite. The song — and the Martin-led phase of punk-flavored pop — is about one person, one relationship, one attempt to go it alone. This distinction matters, because a focus on community is what makes punk both culturally radical and politically effective, and when it's lost, any meaningful connection to liberation becomes precarious. What's usually left is a focus on self-fulfillment that only goes so far in realizing real freedom from sexism's traps.

Pop fans often make bigger meanings from what the marketplace offers. Every time a new artist gives Martin's feminist-flavored formula a try, she adds something of her own that allows for those interpretations to flower. I find Pink's twist on the recipe particularly powerful, because of her big, warm voice, and the unusually strong body and mind that produces it. To my ears, Swift's take remains too callow and insular to really be substantial. However, I've already witnessed its salutary effect on several third-grade girls. The lessons music offers can still be effective, even when they're elementary.

In the same week that Swift has joined the ranks of Martin's sass brigade, undiluted feminist punk is experiencing its greatest resurgence since the 1990s through the example of Pussy Riot, whose unmistakably radical actions and ideas are having a powerful impact on activists and artists around the world. The complex and still unfolding story of the Russian collective can't be summarized in a short essay, much less a paragraph. But it's worth considering this counterpart when contemplating Swift's latest move, not only because it's so powerful, but because it demonstrates how consequential a serious act of talking back can be. Punk is a great flavor enhancer, and in small doses, it adds a kick to pop. Take it straight, however, and you could be utterly changed.