Accessibility links
Who You Calling A B----? : The Record The five-letter word, it turns out, is as central to the popular music lexicon as are "rock" and "roll." 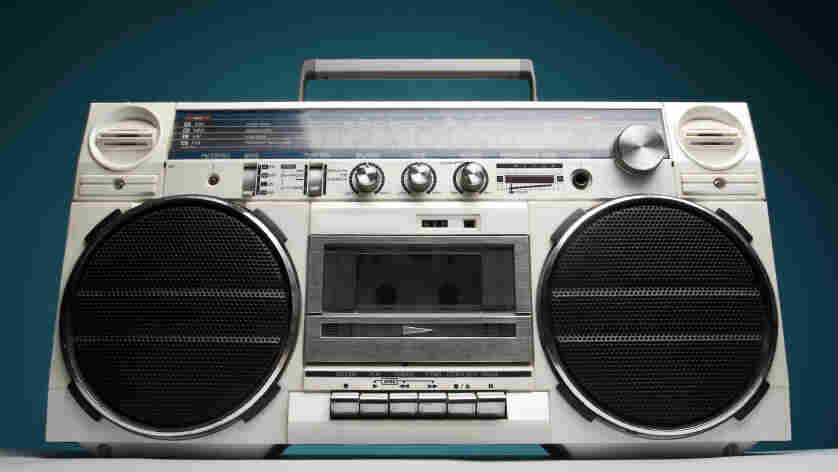 Debate over the word "bitch" has been conducted loudly for decades, as in Queen Latifah's "U.N.I.T.Y." when she asks, "Who you calling a bitch?" ImmortalBliss/iStockphoto hide caption 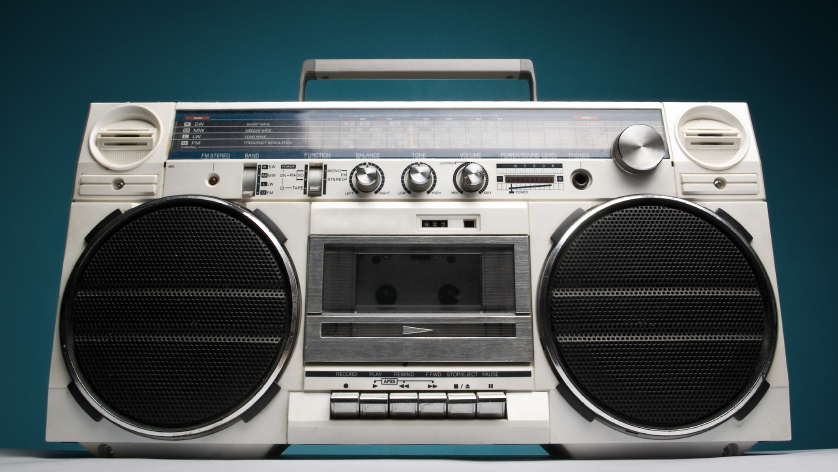 Debate over the word "bitch" has been conducted loudly for decades, as in Queen Latifah's "U.N.I.T.Y." when she asks, "Who you calling a bitch?"

It's just a five-letter word, not even one of George Carlin's seven. And it's impossible to avoid — it's splashed across book covers, uttered like a mantra by sitcom stars, embraced as an identity by feminists, real housewives and gay men alike. Yet when I hear it in a song, "bitch" still makes the hairs on the back of my neck stick up. Me, a known pottymouth whose daughter insists that I need a swear jar! What's up with that?

It's the way it hits, I think. No matter how many bedazzled T-shirts or love letters from Kanye West to Kim Kardashian it adorns, "bitch" still retains some power to provoke. This seems more true in music than in other media, where it's now mostly become a comical element in women's displays of sassiness. Hear it in a rap or a hard rock song, and the clipped consonants of "bitch," the way it makes you bite down on that short vowel, keeps it mean.

This fundamental element in the vocabulary of American popular music sometimes seems close to being absorbed into normal parlance, but inevitably someone raises the question of its impact. "Bitch bad, woman good, lady better," Lupe Fiasco pronounces in the song "Bitch Bad," a consideration of sexism in hip-hop that has engendered debate about who gets to dictate the music's terms. West responded inconclusively: after penning the song "Perfect Bitch" for his latest lady, he held a one-man symposium on its appropriateness on his Twitter feed last weekend, posting Fiasco's video but concluding that profanity could still be "a tool and not a crutch."

Hear more than two dozen songs with the word "bitch" in the title in this Spotify playlist — from Prodigy's "Smack My Bitch Up" to Meredith Brooks' "Bitch" to Serge Gainsbourg's "Harley David Son of a Bitch."

If you don't have Spotify, sign up for the free service.

The same day, the avowed feminist band Pearl Jam closed Jay-Z's Made In America festival with a rendition of the rapper's "99 Problems," a song built around the chorus, "I've got 99 problems but a bitch ain't one!" Other critics have examined how the complex scenario Jay-Z spins out in his verses reflects the many ways "bitch" can be played as part of a power dynamic reflecting racial tensions as well as gendered ones. And right now, with more and more aspiring pop divas embracing the word, it seems like a logical moment to announce that it's been rehabilitated. Yet a more thorough look suggests that this is just another set of entries in a definition that will never fully be settled.

"Bitch," it turns out, is as central to the popular music lexicon as are "rock" and "roll." In the blues and the various forms of street and barroom music that immediately inspired them, the word consistently pops up as both an insult and an element in seduction. Jelly Roll Morton employed it; so did the blues queens Ma Rainey and Lucille Bogan. They did so to gain a foothold in the dangerous spaces where the music that might later become mainstream was made: the concert saloons and bawdy houses where women's bodies were often commodities. Though musicians of both genders tapped its power, from the beginning, "bitch" was slung around as a way of asserting control in a world where a male perspective rules.

It also factored heavily into trash-talk tradition that music scholar Elijah Wald examines in his book The Dozens: The History of Rap's Mama. The street game that gave birth to rap is rooted in the art of the insult, and none proved more potent than those aimed at absent mothers defended by chest-puffing sons. In the 1920s, Wald writes, a friendly coworker in a restaurant explained the dozens for the writer Frank Marshall Davis: "When you call a man a son of a bitch, you call his mother a dog. In the dozens, you jus' elaborate an' expand it more."

A decade or so later, Morton told the folklorist Alan Lomax that he sang "smutty" songs to minimize the "femininity stamp" that stuck on pianists in New Orleans, where many women played that instrument. The song he then shared referred to a female conquest as a "bitch" five times in two verses. Whether the aggression the term signaled embodied desire or scorn, saying "bitch" was a way of getting hard.

It's from this starting point that the history of "bitch" unfolds. A simple database search uncovers thousands of song titles that include it, and that doesn't even touch upon the many ways it's embedded in verses and choruses. In the pre-rock era, women singing the blues used it to chastise other women, but also to claim virility for themselves, as in Bogan's absolutely obscene "Till the Cows Come Home" (in which she also claims to have a penis.) Less evident in country and folk, the term was employed by stars like Woody Guthrie and Johnny Cash to shore up their outlaw cred. Whether casually thrown into a pornographic verse or upping the intensity in a murder ballad, "bitch" is always a weapon of sorts, a way of demonstrating dominance.

In their songs "Queen Bitch" and "The Bitch Is Back," David Bowie and Elton John used the word to add some muscle to androgynous personae. Bowie's song is modeled after the drag queen chronicles his idol Lou Reed penned as part of the Velvet Underground; putting "bitch" in the title tempers the desire the singer expresses for the "cruisers" he spies from his bedroom window. For Elton, who hadn't revealed his homosexuality when "The Bitch is Back" hit in 1974, crafting a barnburner around a Bernie Taupin lyric that deploys the word the way gay men often do — as a funny insult directed at someone throwing a hissy fit — allowed for a comical peek out of the closet that didn't turn off his rock-loving core audience.

Throughout the evolution of its meanings, "bitch" consistently connotes the presence of outsiders (women, queer folk) in mostly straight male scenes. It makes machismo accessible to anyone who utters it with enough authority. When Miles' onetime wife Betty Davis roars it in "Nasty Gal," she's claiming power over a lover who tried to use the word to shut her down. More frequently, though, it's used by men to contain women or shore up their own status.

Son Seals' "Funky Bitch," a favorite Phish cover and a precursor to Public Enemy's "Sophisticated Bitch" and the Miss Thing scorned by Tupac Shakur in "Wonda Why They Call U Bitch," is a high-achieving female who's proven threatening. Nazareth's "Hair of the Dog" offers a twist on the scenario: singer Dan McCafferty can best the heartbreaker threatening to take his soul, because he himself is "a son of a bitch" — a boy as dangerous as was his own mama. Glenn Danzig flips the sentiment in the Misfits' "Where Eagles Dare" — "I ain't no goddamn son of a bitch," he barks in a chorus surrounded by verses that equate sex with violence and horror. He doesn't want anything to do with women, macho or otherwise.

All of these perspectives on "bitch" exist and keep mutating within hip-hop. Reaching back to the dozens and dirty blues, early rappers like Slick Rick (whom writer Cherryl Aldave identifies as the first to speak it on record) established the bitch as a character: a woman, often treacherous, but sometimes simply déclassé. From that point, "bitch" keeps coming to life.

As a central term in an ongoing dialogue about how to describe and contest power, "bitch" is both gun and bullet-proof vest. Eventually, a new meaning arises: in songs like "Me & My Bitch" by the Notorious B.I.G., the word becomes a spiky term of endearment. Female rappers like Biggie's protégé Lil' Kim have embraced the role outlined in such rhymes, looking to archetypes like Clyde Barrow's criminal partner Bonnie Parker as they created their own versions of the hard-as-nails gangster moll. Busta Rhymes' beloved bitch is the queen of a world where women stand equal to men by matching them in coolness and, when necessary, cruelty. This usage doesn't shift the gendered power balance; it simply allows that some women can cultivate enough strength to be a true partner in what remains a man's world.

Such one-of-the-boys fantasies suit an era when partnership is the heterosexual ideal (think of the First Couple fist-bumping), though true gender and sexual equality remains more an ideal than a reality. To be a 21st-century bitch is to be a player in a game that may not entirely belong to men. For a man, to say the word tenderly is to welcome the idea, if not always the reality, of such a woman. An earlier generation of feminists adopted the label as a confrontational gesture, and explicitly political organizations like Bitch Media follow that mode. More often now, though, "bitch" flows more casually from the lips of women as well as men to signal pragmatism and mercenary independence. The bitch in the house, in the club, or rolling with her other bitches is able to view herself as empowered. Yet the old baggage remains — the shadow of both sexist and racist stereotypes.

A word that can't be fully absorbed is one of the most powerful tools (or, as West admits, crutches) an artist can select from her arsenal. "Bitch" is fully lodged within the vocabulary of pop at this point, but that doesn't mean it's harmless. A great example of more serious thinking comes from the female hip-hop duo THEESatisfaction, whose short song with the term as its title contemplates what it feels like to realize you're inhabiting a cliché. "I am the bitch on the side," Cat and Stas sing in the chorus, describing the moment in a sexual encounter when you realize you're using someone, and being used. It's refreshing to hear that old epithet melt a little, shifting meanings as the women roll it around on their tongues. Even an old dog, it turns out, can be trained to do a new trick.