Accessibility links
Mumford & Sons Preaches To Masses : The Record The British band, which draws inspiration from American folk and Christian tradition, has become one of the biggest rock bands in the world. Its new album, Babel, will be the biggest album in the country next week. 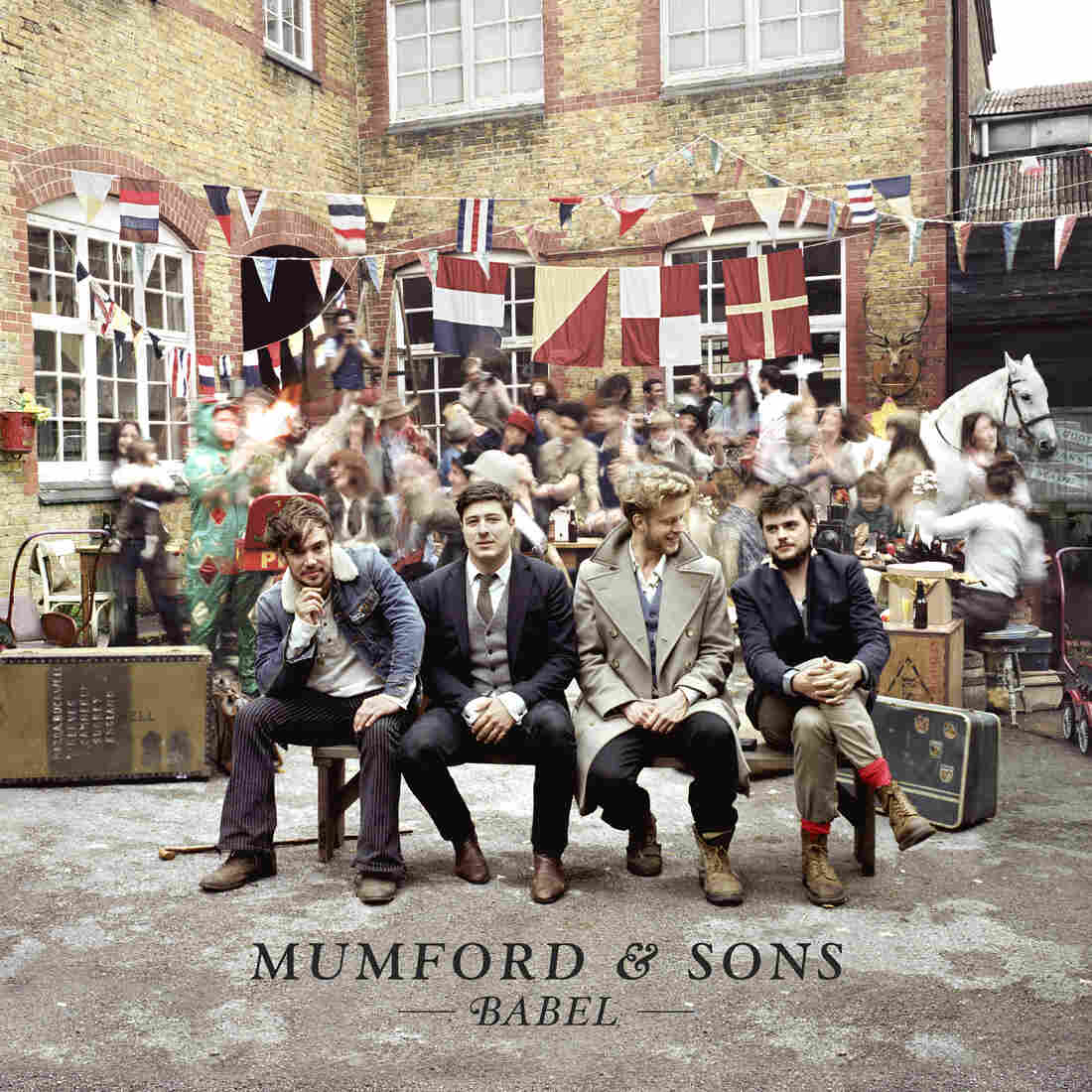 Mumford & Sons is led by singer Marcus Mumford (second from left). The band's second album, Babel, was released on Sept. 25 and is on pace to be the highest-selling debut of 2012. Courtesy of the artist hide caption 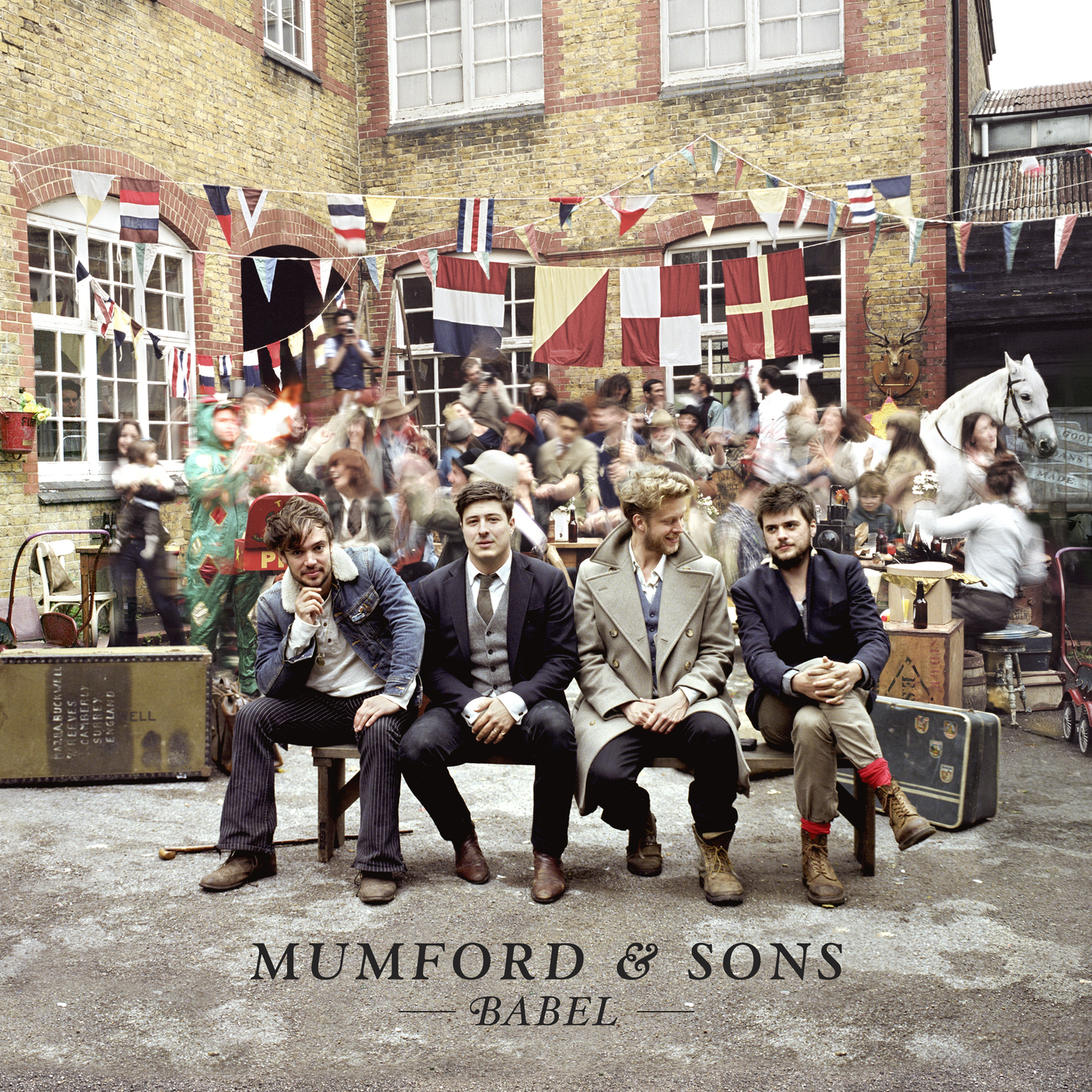 Mumford & Sons is led by singer Marcus Mumford (second from left). The band's second album, Babel, was released on Sept. 25 and is on pace to be the highest-selling debut of 2012.

Marcus Mumford may not seem like the kind of guy who'd start a bar fight. This apple-cheeked ministers' son, whose weapon of choice is a steel-strung Martin guitar and whose delirious happiness at inheriting the wooly mantle of folk-rock has endeared him to idols from Bob Dylan to Bruce Springsteen and Emmylou Harris, makes music that's all about uplift and carefully borne out catharsis, about honoring tradition while claiming your own space. Such a nice boy seems unlikely to cause trouble on the pop scene.

Yet from the minute the British singer-strummer's band Mumford & Sons started to score big with college kids and music-industry mucky mucks, the backlash against it began. The group's debut album, Sigh No More, eventually shifted 2.4 million units on the strength of incessant touring and a well-placed Grammy telecast appearance with old Jack Frost. Critical support, however, pretty much defined "mixed." The indie music tastemakers at Pitchfork issuing one of their particularly vicious swipes and even positive reviewers expressing reservations. The same thing is happening now that Babel, Mumford's second studio album, has arrived, with the Vice crew making fun of the band's fans, Chuck Eddy at SPIN effectively explaining why their spiritual striving strikes him as hollow (I think it's the most knowledgeable negative review of the band) and Steven Hyden at Grantland pushing the old deflation button by reminding young Marcus that he'll never be Bob Dylan.

That's right. Marcus Mumford will never be anything like Bob Dylan, really; at least not unless serious life changes wreak havoc on his personality. The great bard is one sort of rock 'n' roll character, a trickster whose wicked sense of play wrings startling new meanings from old texts and traditions. Mumford and his band connect with a different lineage, an approach that honors music's ability to unite and create an aura of ennoblement. It's long proven powerful with audiences and highly problematic for certain music listeners I'd cautiously call elites — people like me, who write about music for a living, or others who've built lives around a particular rock 'n' roll code.

That code values outsider personalities and transgressive acts over the far more common human quest to fit in with conventional society. It's grounded in the real, powerful legacy of popular music as a forum for otherwise unheard voices: African-Americans through jazz, the blues and, later, hip-hop (and really, through most all pop music); rural people through country and early rockabilly; queer people through disco; misfits of various kinds through metal or punk. The idea that popular music should be oppositional is a powerful one and has made it a central conduit for viewpoints that might have otherwise never reached a large audience. But the fact is, plenty of people who aren't rebels or freaks gain insight and sustenance from popular music, too. They even get it from rock 'n' roll.

Marcus Mumford was raised in a devout Christian household, went to expensive schools, and recently married a movie star. He is in no way a social outsider — except perhaps in those dark moments that inspire some of his lyrics, which read very much like the struggles of a person not trying to reject or even remake a time-tested moral code, but to live up to it. When he sings of his unborn sons in "Babel" or of a lover he fears failing in "Not With Haste," the dream that stands just beyond the song is one of family life and personal fulfillment attained through faithfulness and good deeds. Iggy Pop, one expects, would be appalled, or at the very least, bored. How can anyone who's dedicated to loud, raucous music — the stuff that's supposed to rip through life's dull normality — employ it in the service of such commonplace, even orthodox, hopes and dreams? But for many, this emotional stance deeply resonates.

This seems particularly true now, with a new generation of fans emerging not only for Mumford but for acoustic-leaning American bands garnering ever-larger and more fervent audiences on the club and theater touring circuit. A lot of this stuff has unmistakably churchy overtones: The Head and the Heart shares a name with Garry Wills' popular history of American Christianity; The Avett Brothers sing of carpenters and (indirectly) Corinthians; the rousing choruses of bands like The Lumineers musically connect to both old hymns and contemporary praise and worship music. It may not be cool on the secular scene to play up these Jesus people leanings, but they're a huge part of what attracts fans to these artists. Many pop fans are or have been churchgoers, and the comfortable feeling of singing along, nurtured in many during childhoods spent in the pews, allows for a form of release that's edifying without proving too scary.

The rise of the megachurch in America (and England, apparently; so Marcus Mumford's Vineyard connections have revealed) has a lot to do with the newest wave of folk-rock taking hold. These institutions are grounded in the principle that religion serves people best when it meshes well with the secular world. Instead of cultivating a separate sphere where mysticism and anachronistic practices prevail, megachurches feel like everywhere else, except with God present (according to the faithful). Dress is casual. Leaders' sermons sound like self-help pep talks. And the music sounds like something that would pour out of your radio.

In the 1990s, megachurches helped spawn a wave of subtly Christian alternative rock bands who leapt onto the mainstream charts. Remember Lifehouse's "Hanging By a Moment"? That band was nurtured by a Vineyard congregation. Switchfoot came out of the contemporary Christian music scene and still has strong connections there. These bands connected the moral questing of alternative rock groups like Pearl Jam to a specifically religious context. Indie artists like David Bazan, and later Sufjan Stevens, found fruitful ways to translate religious introspection into language that spoke to a larger secular audience. The most powerful work by these artists faces up to the fall away from faith as well as celebrating its comforts; dynamic belief always carries plenty of questions, and music offers an immediate and powerful way to confront them.

All of this Godly sound echoes back to the granddaddy of non-sectarian spiritual rock bands: U2. Every U2 album, from 1980's Boy (the hit was called "I Will Follow!") to 2009's No Line on the Horizon, grapples with matters of faith and ethics, sin and salvation. What Bono and his mates figured out early on was how to connect a specific set of concerns formed within religious practice to other cultural forms — literature, soul music, cinema — where similar seekers were expressing themselves. U2 never became a "secular" band; its music simply relies on the fact that religion, for better and worse, is everywhere.

Mumford & Sons does something similar, and by doing it now, it's filling a gap in pop music. I know the feeling that radiates from a room full of Avetts or Mumford fans singing along with every overly sincere, earnest word; I've been there myself. At sixteen, I was a confused Catholic kid struggling to figure out how I could be my parents' daughter and still want to make out with boys, dye my hair funny colors and dance all night to ridiculously loud music. U2's music didn't present an alternative to the church life that had made me, in part, who I was then; it showed me how to struggle within that life, and get to the point where I could either walk on within it or walk away.

I'm not a practicing Catholic now, but when I hear Mumford & Sons or the Avett Brothers, I recognize the same internal fights, the same desire to grapple with impossibly big terms like "sincerity" and "belief," that U2's music helped me through twenty years ago. The frame is different: today's churchy music has more traditional trappings, connecting it with other trends like the crafts revival and sustainable living practices. But the deeper motivations, I think, are the same.

When Babel clocks in next week as the biggest Billboard album chart debut of 2012 (it's predicted to sell as many as 600,000 copies in its first week), Mumford fans will rejoice and more than a few critics will grumble. How boring! Normal folk like normal music. But there's a reward in really engaging with what this "normal" represents. We should thoroughly examine what's conventional — to question whether, for example, these mostly white male artists really can speak for a broad audience and to point out that there's a lot of baggage attached to Christian-based definitions of morality. But to deny that widely shared notions of being good and strong and fulfilled — the things Marcus Mumford sings about — don't have power is to dismiss a lot of what lives in people's hearts. Some might cringe at the banality of it all; others will celebrate the common chord this band strikes and call it extraordinary. Neither response fully recognizes that the prosaic nature of this music is the point. Mumford & Sons aren't changing the world that much, but they're living loud in their little corner. In that, they're just like most of us.