Accessibility links
Tori Amos On Her Muses, Her Song Girls And Her Father : The Record In an interview with Ann Powers the singer reflects on her twenty-year career, her new album and making set lists.

Tori Amos On Her Muses, Her Song Girls And Her Father

Tori Amos On Her Muses, Her Song Girls And Her Father 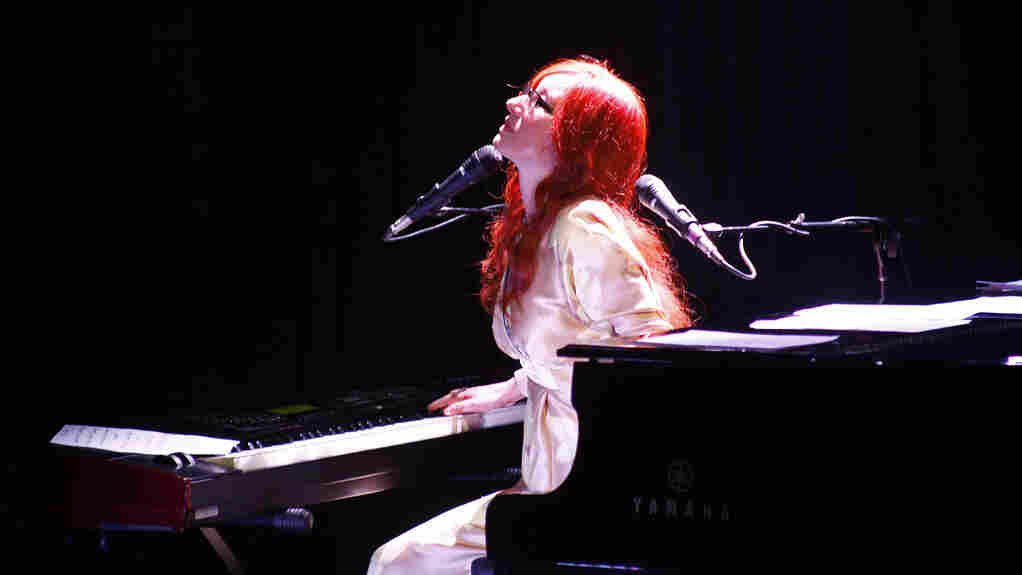 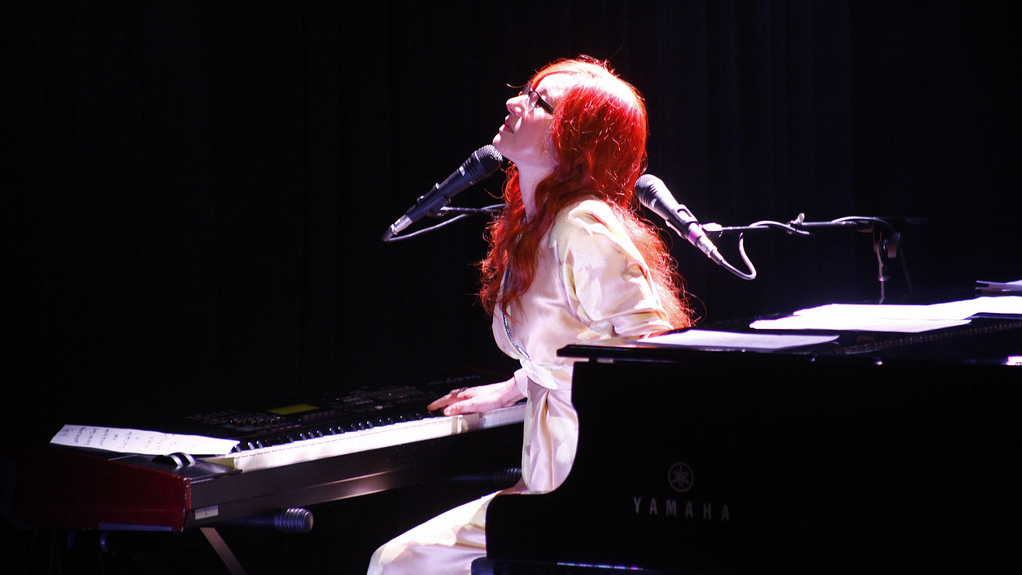 Two weeks ago, the inimitable Tori Amos played an intimate show at Le Poisson Rouge in New York City, accompanied by a string octet, in celebration of the release of her retrospective album Gold Dust. Like that album, which features a selection of songs from Amos's twenty-year solo career with orchestrations performed by the Metropole Orkest, Amos's set that night was beautiful and full of surprising choices. You can watch it here, and it will be transformed into a special for radio broadcast later this year. I was there to introduce Amos and do a brief interview that will be woven into the broadcast. This offered a me a chance to be happily reunited with one of my favorite collaborators.

In 2005, Amos and I co-authored Tori Amos: Piece By Piece, a memoir that's more like a manifesto, a guide for women working in the music business and a philosophical explanation of what artists can and should do in the modern world. We talked for weeks to create that book; at Le Poisson Rouge, we only had a few minutes to catch up as Tori rested her voice in preparation for the show. Still, we dove right in, talking about her recent, classically-inspired work; the songs she always calls her "girls"; and the preoccupations Amos still favors — sex and religion, the piano as partner and muse and the search for compassion in a fast-moving, sometimes unforgiving world.

NPR: In recent interviews, you've often talked the challenges of working with an orchestra or, in this case, a smaller ensemble. Classical music is your root, of course — you were a child prodigy who entered Baltimore's Peabody Institute at age five. I see this phase as a circle you're making, back to the child-Tori. Or do you feel like these waters are completely new?

Tori Amos: I think it's both. When I was little, my mom tells me, I used to say things like, "Mom do you hear the string section? Do you hear the string section?" And she would look at me and say, "No honey, I don't know what you're talking about." And so I guess, as a kid, I was gravitating towards that [in her songwriting and piano work]. Yet the way things happen in the pop industry — especially in the late '80s and early '90s — I got into playing and constructing songs in a different way. And yes, some songs had orchestrations. But it felt like it was time to do a whole record that acknowledged that side of the work.

NPR: In your song cycle Night of Hunters, you based songs on works by composers including Bach, Chopin and Satie. But you also have the American songbook in your past; you sang in piano bars as a teen. I wondered if show music was something you were factoring in as well when you were creating these orchestrations with your collaborators.

Tori Amos: Well, you know all of these projects have made such an impact on Gold Dust. It's taken us two years to do it. The Metropole Orkest invited me to play, and we thought it was going to be a one-night stand. It was just one night to play together, and yes, you have to rehearse and get all the orchestrations, no different than you would for 10 nights. But we had no idea we would be making a record and having a conversation. And one thing led to another. While we were doing that, we were getting ready to record Night of Hunters. And we've still been working on [her long-delayed musical] The Light Princess for 5,000 years now.

Tori Amos: It's a big family! It's strange how when you start crawling inside the dead guys' [compositional] structures, they start to come alive and they start talking to you. But you can't be casual about it. You really have to think, "All right, if I'm going to mess with the masters, as they say, then I have to chop wood and carry water." You really have to go back to that training and study their structures. So I used my training from the Peabody, analyzing scores before I started cutting into them.

NPR: Another thing I've been thinking about while listening to Gold Dust is that your songs speak to the life cycle so beautifully. Listening to your solo debut Little Earthquakes now after 20 years, I'm really realizing that is the album of a young woman entering a new phase of life. It has so many songs about family, about separating from your parents and becoming an independent woman. And then as your music moves forward from that point, we have marriage; we have the death of loved ones; we have the birth of your precious daughter. I wonder how these basic human themes and stories form arcs within your work.

Tori Amos: I think that's right. Tonight, two of my nieces will be here: Cody, whose full name is Dakota, and Kelsey. A song we're playing tonight is "Hey Jupiter." This orchestration is based on the Dakota mix of that song. Kelsey also sang on Night Of Hunters. So my nieces have been a huge influence and inspiration: their lives and what they've been going through. They're at a different age than Natasha, my daughter, who's 12. My nieces are 20 and 27, and they're in a different stage of life. So, yes, of course, they know that they're muses for me.

Tori Amos: I guess the last few years, I have been opening up to the idea of romance, sexuality, joining together. That there doesn't have to be a perversion in sexuality. Being a minister's daughter, I was brought up with all the shame that surrounds eroticism. So the tip that the muses told me to open up to is a spiritual eroticism in your life. That's really changed the way that I see it. We as women sometimes take it to extremes, where it's [either] degradation or it's puritanical. Where do you have a balance of sensuality and romance and passion for yourself? I don't mean just for that guy or whomever your partner is, but it can be also for your art. It's about ideas. It's about expressing them.

NPR: I wanted to talk about the song "Flavor," which is featured on Gold Dust. To me, this is one of your most directly philosophical and theological songs, yet it's not really a protest song against patriarchy or the church. It's really a meditative song about where does the divine meet the sensual. And I wondered if this fairly recent song is a good representation of where you're at spiritually these days?

Tori Amos: Well, I was concerned with all kinds of issues that we all are right now. And "Flavor" stepped forward as a song girl and said, about a year ago, "I have to be a part of this, and the reason I have to be a part of this album is that in the 21st century, we still have issues as a culture with how other people want to live their lives. Even if they're not hurting anybody, that we feel the need (some of us) to dictate to other people." And you have to have my father, the minister, in the room when I talk about how the patriarchy likes to dictate. And he'll just look at me, and I will say, "Where is the Christ consciousness in our culture? Where is love thy neighbor as thyself?"

Honestly, if consenting adults want to live a certain way, and they're paying their taxes, it makes no logical sense why they don't have the same rights that, say, we do. And I've suggested that if they can't have the same rights, it shouldn't be legal that they have to pay taxes. It makes no sense to me. And "Flavor" said to me, "We're not an angry song. We're not approaching this with anger. We're approaching this as very, very simple." If you have an issue with homosexuality, then it comes to your own fear and your own darkness. And why are you so closed if you call yourself a Christian? And this comes from a minister's daughter.

NPR: In your music, you've been reaching out and touching timeless themes, but I love to hear you talk this way because it shows that you are still so engaged with the most important issues politically.

Tori Amos: And don't you think one of the most important emotions is compassion? I find that in the 21st century, there's not a lot of compassion for what other people are going through or the walk that they have to walk. My grandfather, who was part eastern Cherokee Nation, would say — you know that old saying: "Until you've walked a mile in another man's or woman's moccasins, you really have no idea what it feels like.'

NPR: In the past we've talked about your piano playing and how it's evolved and touched upon different, kind of core, sounds in the past. I remember a very funky phase you went through when you and I were hanging out. That's still there; the rhythm, the groove is still there. But I'm wondering what touch you bring to the piano now. Do you find yourself being more aggressive, more tender, or a mix?

Tori Amos: It depends on the day. I think that she [the Bosendorfer piano Amos always plays] is such a collaborator. She plays me, really. Let's not get confused! She's in control. And so, I think when I surrender to the moment I allow the songs to be who they want to be. And that can change depending on the night, depending on what's happened that day. The songs can change their dresses or their jeans — like most women, they like wardrobe.

NPR: Do you still write your set list the way that you used to? Where you really get in touch with the day and the environment and the mood, and you make a story for all of us to enjoy that night that's different every time?

Tori Amos: That's what I try to do. I mean, sometimes you hope you get it right and you kind of cross your fingers and say, "Well I hope this speaks to people. We'll see."

NPR: Now that you have Gold Dust, this wonderful collection of songs from throughout your career, I wonder what are the lines you enjoy singing the most from your body of work?

That's still my favorite too!