Accessibility links
For The Ladies: R. Kelly, Teddy Pendergrass And The State Of R And B : The Record Writer Nelson George, who saw Teddy Pendergrass on his "Ladies Only" tour in 1978, says R. Kelly's recent shows are an effort to reconnect R&B to its most devoted fans. 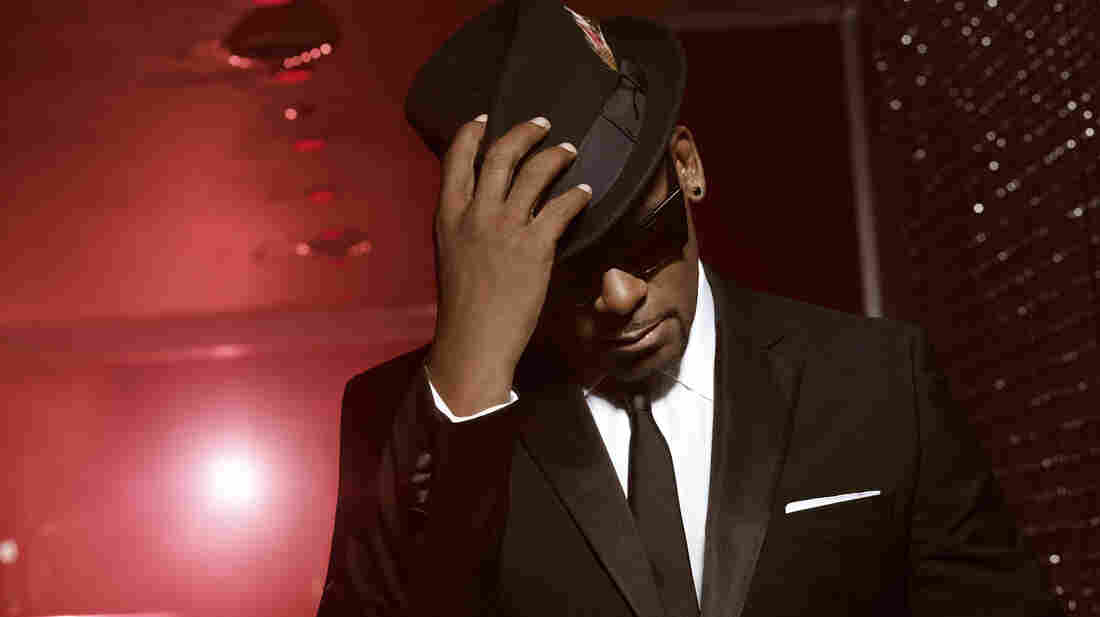 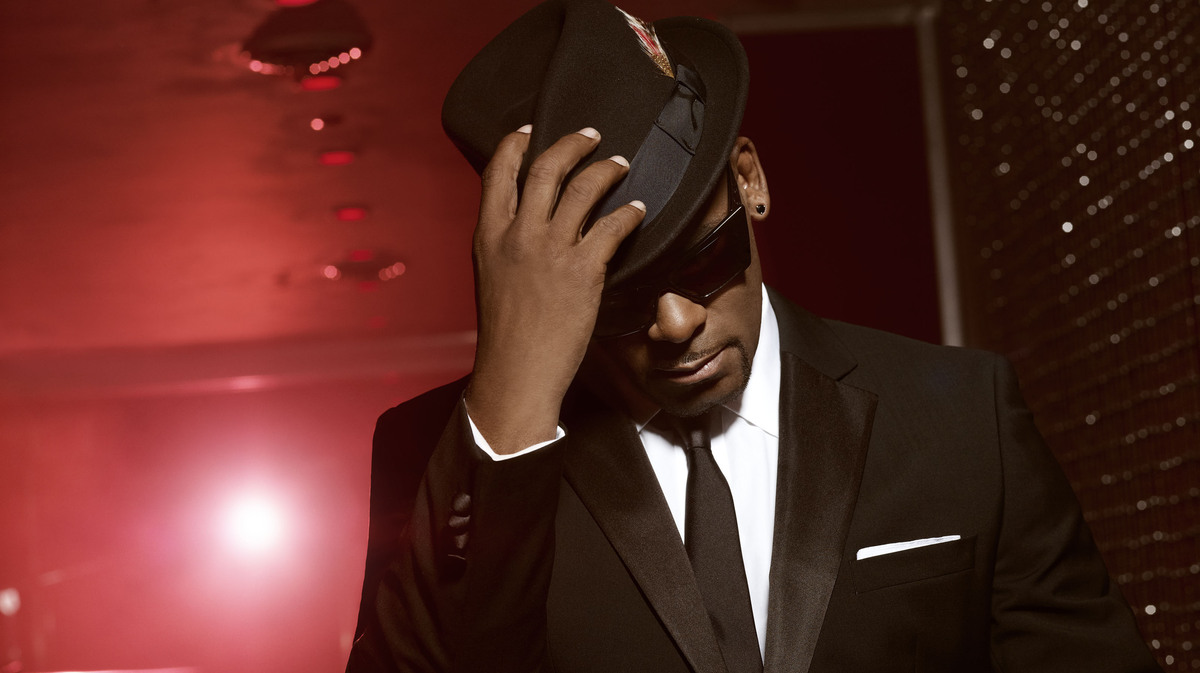 R. Kelly's "Single Ladies" tour, which includes a "Ladies Only" section, began this week and runs into December.

This week, fans of music, melodrama and ridiculous wigs welcomed the return of Trapped in the Closet, R. Kelly's hip-hop soap opera, which returns to IFC the day after Thanksgiving with 20 new episodes. (Watch the recapping Chapter 23 here.) The singer-provocateur is having a busy fall — he's touring with his "Single Ladies" show, aimed at just what the title suggests, and has announced a racy new album, Black Panties, forthcoming next year. Meanwhile, Kelly has some young rivals in the field of creative R&B: Frank Ocean's in the studio with Jay-Z and Pharrell, and Miguel has just released the gorgeous Kaleidoscope Dream, which promises to make it onto many a year-end best list. And the business of R&B is in the news, with Billboard instituting a new chart solely devoted to songs from the genre.

It's a good time to check in with someone who really knows the genre. Nelson George wrote the essential histories The Death of of Rhythm and Blues and Buppies, Baps and Bohos and has recently transformed himself into a documentarian of black music. (Check out the Kickstarter for his current screen collaboration with the venerable music producer Arthur Baker, Finding the Funk, or his film memoir, Brooklyn Boheme, on ITunes.) (George is also a novelist; his latest, The Plot Against Hip Hop was a finalist for the 2012 NAACP Image Award in Literature. I'm always excited to hear what George thinks about a given musical moment, and when I discovered that he was one of the very few men who caught the first big "Ladies Only" tour — the one Teddy Pendergrass mounted in the late 1970s — I decided to ask for his views on the current state of smooth.

NPR: This is an interesting moment for R&B. There's a lot of innovation and quite a bit of good old-fashion sexiness. R. Kelly is crossing the country on his "Single Ladies" tour, selling his brand of ribald heat to mostly female audiences. The supergroup TGT (Tyrese, Ginuwine and Tank) will do something similar on an upcoming "Shirts Off" tour. Why do you think these older artists are going so hard for the ladies lately?

Nelson George: Hip-hop has always been challenging for adult women. Even women who grew up with it and love it as a genre have problems with many individual artists and songs. Moreover, the youth orientation of hip-hop makes it seem like even "emo" MCs like Drake are talking to teens or young adults — not women with kids or ex-husbands. R&B and soul have always been about adult situations and adult emotions, with songs of devotion, desire and delight aimed squarely at women. R&B, unlike hip-hop, is where the conversation is overwhelmingly about love and usually aimed at seducing or at least engaging women listeners. Ladies like to be the center of attention, and they always are in R&B. So concerts aimed squarely at them makes perfect business and aesthetic sense.

NPR: You attended Teddy Pendergrass's "For Ladies Only" tour in 1978, thanks to an extra ticket your girlfriend had. What was that experience like? How did Pendergrass, the sex symbol of post-disco R&B, differ from, say, R. Kelly?

NG: My college girlfriend Jackie took me. There weren't many men there, but those who were looked to be on dates or were even escorting several women (probably their girlfriends' friends). Teddy Pendergrass, first with Harold Melvin & the Blue Notes and then with his solo success, always electrified women. Teddy was one of the last raspy, low tenor voiced male sex symbols; in 1979 Michael Jackson's Off the Wall would begin an era when almost every major black male singer either sang in a higher pitch or with a lighter tone (Prince, Luther Vandross, Freddie Jackson, etc.). There was nothing kiddie about Teddy's voice. It had authority. It made demands. It was not to be negotiated with. When he sang "Come here, woman!" during "Close the Door," it was if he'd personally grabbed the ladies by their arm and dragged them into the bedroom.

R. Kelly doesn't have that same macho presence, but he does understand the tradition of R&B love man. In his early '90s hits the R could come off a little juvenile in lyrics and delivery despite a very velvety tone. On his last two albums, however, he's truly writing old school material and delivering it with great conviction; it's a mix of his Chicago ancestors Sam Cooke, Curtis Mayfield and Jerry Butler. He's about as close to seeing a show at Chicago's Apollo, the Regal, as you are gonna get in 2012.

NPR: I wonder what your ex-girlfriend remembers most about that night. I imagine a woman would have experienced it differently than a man did.

NG: I can't speak for her, but it did make for a romantic train ride home.

NPR: Back to now. As veteran male artists steam things up, younger ones are making sexiness arty. Frank Ocean's songwriterly, flexibly sensual music took the pop scene by storm last summer, and more recently, Miguel's released one of the year's best albums: the atmospheric Kaleidoscope Dream. These new stars seem more cerebral to me. Why do you think they're making this experimental turn?

NG: Well most of what passes for commercial R&B these days is made for kids by singers with dubious romantic credentials (Chris Brown, anyone?). The music tends to be very generic and not deeply soulful. Ocean and Miguel have staked out ground where they are not competing with those hit-driven acts and are cultivating a sound that balances adult concerns with a sense of young men trying to understand their own desires (an apt description of Ocean, particularly). Maxwell's last LP, BLACKsummers' Night, went platinum; it was a comeback that featured an artful R&B approach that referenced the past without being retro. I think that might be a slight template for these younger singers. Also, D'Angelo is finally back performing and recording. His new direction could have a big impact on R&B, just as his debut did in the '90s.

NPR: Recent R&B shows I've attended, including Erykah Badu's concert here in Tuscaloosa last week, have been heavily skewed toward a female audience. The men who do come out seem to be there to please their dates. R&B has always boasted amazing lovemen, but were the fan bases for Otis Redding, say, more mixed? Do you think hip-hop's rise contributed to R&B becoming women's music?

NG: In the soul era up through Teddy and then Bobby Brown, adult black males used R&B singers as fashion guides, role models and benchmarks for their own swagger. That place has been taken by MCs, with Jay-Z a hero to the same kind of men who loved the Temptations and Otis Redding. I think the record Jay and Kanye made, "Otis," epitomizes the generation change. Jay-Z calls himself "Sinatra" but the role he fills in black America is one that Marvin Gaye, James Brown and Otis used to play. He has become an embodiment of an idea of maleness. No black singer since maybe R. Kelly, or more likely back to Bobby Brown in the new jack swing era, has been that.

NPR: Billboard recently added a chart strictly for R&B songs, which seems to point toward a revival of the genre. Yet the way that chart is being calculated — to include downloads and streams — has caused some purists to object, because that method allows Top 40 stars like Rihanna to dominate over more "authentic" artists like, say, Brandy or Trey Songz. What do you think is a useful working definition of R&B these days? Does it need to be separated from hip-hop, or from youth-oriented pop?

NG: That's an challenging question. Are Brandy and Trey Songz now the standard for R&B music? Whoa. I'd say what Jill Scott, John Legend and Frank Ocean are doing is having a hard time getting attention in the rap-heavy dance pop era we are in now. But I'd say any artist who's song-oriented, as opposed to beat-oriented, is gonna find this a tough moment. If a new chart system helps them I'm for it.

Black adult radio (like rock adult radio) is in a free fall around the country, yet those listeners haven't disappeared. I see them at shows. They read my books. They hit me on Facebook and Twitter. But they are very underserved. These "For Women Only" shows are, in sense, an effort to reconnect the music to its most devoted fans and to the men who love these fans.