Accessibility links
Go See The Old Guys: Neil Young, Bob Dylan And Bruce Springsteen Are Still Killing It Live : The Record Recent live shows by some of the geezers of rock — from Neil Young to Roger Waters — have been much more than exercises in nostalgia. 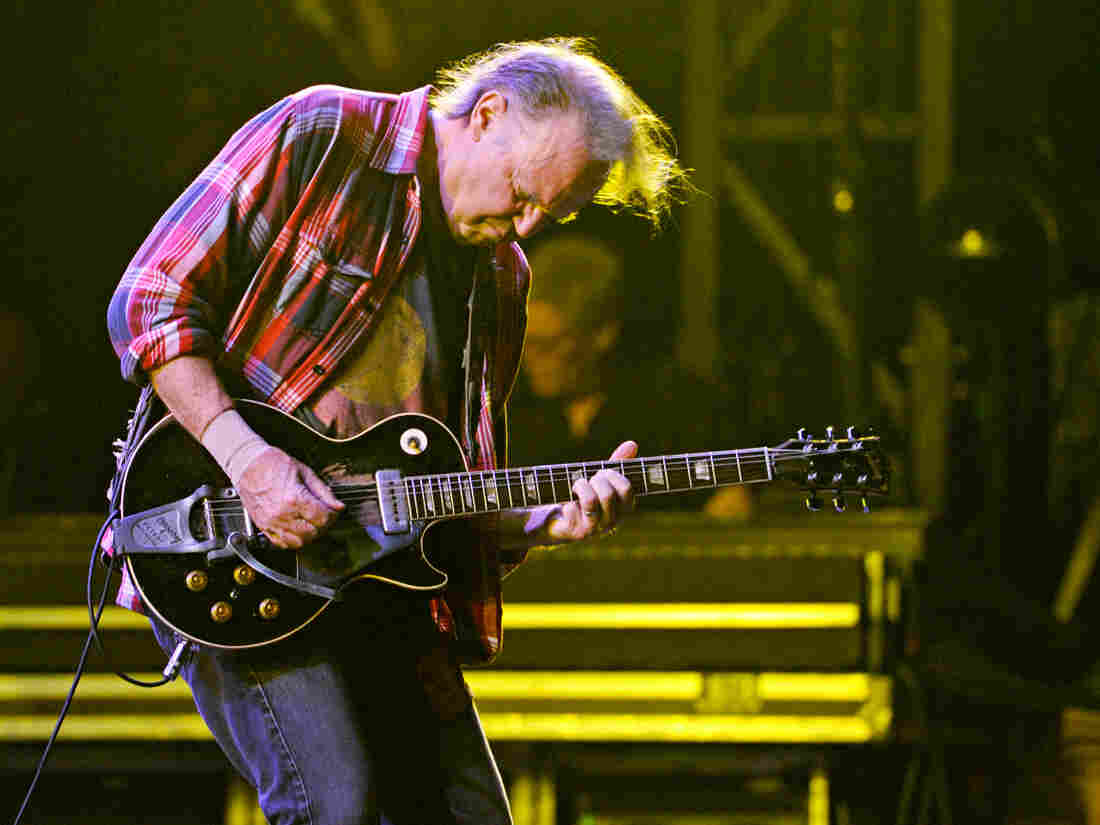 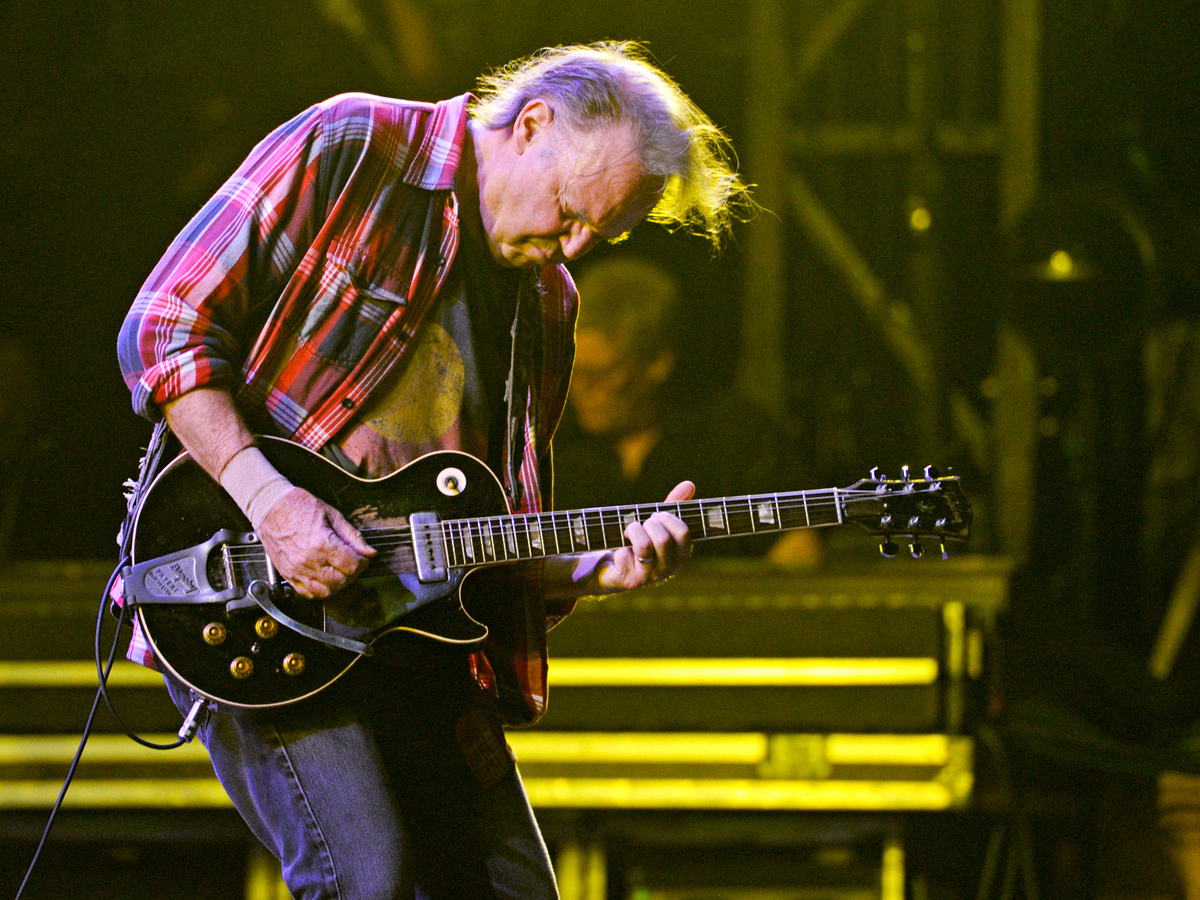 Neil Young, who turns 67 years old this month, performs with Crazy Horse on Oct. 26 in New Orleans. In recent concerts the group has focused mostly on material from its new album, Psychedelic Pill.

Neil Young made me write this. Before last Thursday, when ol' Shakey and his golden garage band Crazy Horse stomped through my local amphitheater, the last thing I'd thought I'd be excited about was a bunch of guys hovering around 70, playing loud rock and roll into the night. I knew I'd love the Crazy Horse set — it was getting great reviews, the new album Psychedelic Pill is cool, and Young's the tinkering type who never stops challenging himself. But later, I found myself thinking about how Young's impressive vigor doesn't separate him from his peers — it's actually characteristic of the very acts that walked like giants in the 1960s, and whom you'd expect to be delivering little but nostalgia now.

We all know classic rock acts make bank on the touring circuit. Roger Waters had the top-grossing tour of the first half of 2012 in his live staging of the Pink Floyd classic, The Wall. Bruce Springsteen, a few years younger, is the year's most talked about road dog. Elton John and Paul McCartney are also near the top of those lists. The Rolling Stones are about to embark on a very fancy 50th anniversary run; Pete Townshend and Roger Daltrey are touring Quadrophenia, and then there's Young, earning raves all over the place.

Taylor Swift and Rihanna may dominate mainstream pop now, but their cranky uncles from the Stratocaster side of the family aren't about to pull out their tinnitus retraining therapy aids and take a nap. Whether we're marveling at the vigor of the superfit Springsteen and Mick Jagger, or feeling the pathos of determined but more battle-scarred vets like Townshend and Young, those of us who still go see the old guys are witness to a whole new set of revelations about what remains compelling after living fast fails to lead to dying young.

In the abstract, this bugs me. I was born the month The Beatles came to America, on the cusp of generations boom and X, and have always felt burdened by my immediate elders' assumption that their intrusive guitar noise was better, bigger, and more historically important than any other music. Counterculture-era male rockers perfected all the clichés that punk taught me and my friends to sneer at; they marginalized women and alternately stole from and fetishized the African-Americans who were their mentors and peers; and they invented the mullet. I say this while admitting that I love a lot of classic rock — Jimi Hendrix is my homeboy, and I listen to Led Zeppelin at least once a week. But too much focus on one style and one bunch of guys who played it has obscured a lot of great music from other times, places and people. I'd love to see some diehard fans not spend their yearly concertgoing allotment on those same guys, and check out someone new (or seasoned but equally great) instead.

I can't deny it, though. The geezers of rock are really bringing it lately. In the past few years, I've seen most of the artists I named above, and not a one phoned in his performance. I caught Waters' spectacle at the Coachella Valley Music and Arts Festival in 2008, and was taken aback by its spectacle, which was not just grandiose but genuinely grand. At the opposite end of the spectrum, I was lucky enough to see McCartney perform on the tiny Amoeba Records stage in Los Angeles in 2007, beginning his late-career comeback with a gesture of plain, heartfelt joy.

Money is an undeniable factor motivating many seasoned rockers, and plenty of older stars are focusing on the marketplace and not making work anybody would call fresh. (Hey there, Rod Stewart.) But art, and an interesting mix of retrospection and restless rejiggering, often soon take over in their shows. Consider Leonard Cohen, the folk poet who hit the road again at age 74 after being bankrupted by a swindling manager. At his 2008 Los Angeles show, he played for three and a half hours, dropping to his knees on nearly every song, frankly astounding the audience. That tour's set list wove together old favorites and plenty of obscurities, exemplifying how a veteran artist can use the concert setting to retell the story of a complicated career.

Young, conversely, almost perversely refuses to dwell too much in days gone by. Pulling out cut after cut from Psychedelic Pill, keeping the few hits — a five-minute "Cinnamon Girl," a pretty perfunctory "Needle and the Damage Done" — to a minimum, he could be accused of trying to alienate listeners looking to relive the their own youthful high times. (Bob Dylan, another titan of the senior circuit, has been doing the same thing for decades; I remember a San Francisco show circa 1990 where some Ralph Lauren-outfitted VIP's seated near me got very frustrated when they couldn't recognize the revamped melody to "Like a Rolling Stone.")

Yet as Crazy Horse leaned in close and pushed forward, resonances from every previous Neil Young era floated through the music's distortion. I laughed when Young theatrically donned a flannel shirt before initiating "F*!#in' Up," an album track from his twentieth studio release — but I also thought, it's true, this dude did invent the 1990s (rockwise at least). Not only his pals Pearl Jam but Dinosaur Jr., Sonic Youth and Nirvana wouldn't have done what they did without his example. By focusing on new material and then juxtaposing the few old faves included with less familiar songs that share their main qualities, Young's current set lists make such insights more accessible.

Beyond the chance to perform chiropractic adjustments on amazing bodies of work, however, something else happens on many of these tours. Partly, it happens because of less than perfect real bodies. The gods of rock have been through a lot by now — they've suffered serious health setbacks, negotiated scandal, had first and second and third wives and watch their kids have kids (and grankids and sometimes flourishing musical careers). They're facing death, not in the recklessly dramatic ways they did as not really immortal youth, but through the irritating daily struggles of bodies breaking down. "Sixty-four is old, you know what happens next," sings Loudon Wainwright III on this latest album Older Than My Old Man Now, which reflects hard on very reality. Pete Townshend echoed this sentiment in an interview about the Quadrophenia tour, saying that he and Daltrey have been "anxious to work together again before we drop dead." That drop, or one less catastrophic but still significant, could happen any day. Posturing just doesn't seem that appealing when one false move could herniate a disc.

Beyond their own catalogs, baby boomer rock icons can't help but see the rest of the world changing around them, too. Students in my husband's undergraduate seminar on American popular music have often not heard Nevermind all the way through, much less Exile on Main Street. (The eternal exception: they all know The Beatles.) It's possible, I'd say wise, to trace the slow marginalization of rock from the dawn of the 1970s, when disco began reinventing dance music, through the rise of hip hop in the 1980s and 1990s and the fierce return of teen pop in the 2000s. The powerful connections that once tied rock to a whole lifestyle, and to meaningful political and social change in particular, now run through channels ancillary to other, more popular musical forms.

So why not mess around on stage, pull out something unexpected, and put pleasure and immediate connection first? This is what I often see happening now when I watch stars I once marveled at from the cheap seats. Don't get me wrong: they still do things that make me wonder about them as people. Ron Wood just announced he's about to marry a woman he's known for six months, who was born the year the last really important Stones album came out. I wish them well, but I don't need to meet any of these guys in person. Help me out with one of those ridiculously priced tickets, though, and I'll be there, ready for some magic from artists who've learned that beyond caring, they still care.