Accessibility links
A&M Records: Independent, With Major Appeal : The Record From the early '60s to late '80s, A&M was one of the most eclectic and powerful independent record labels in the world, putting out huge records by The Carpenters, Peter Frampton, The Police and Janet Jackson. This year marks the 50th anniversary of A&M's founding. 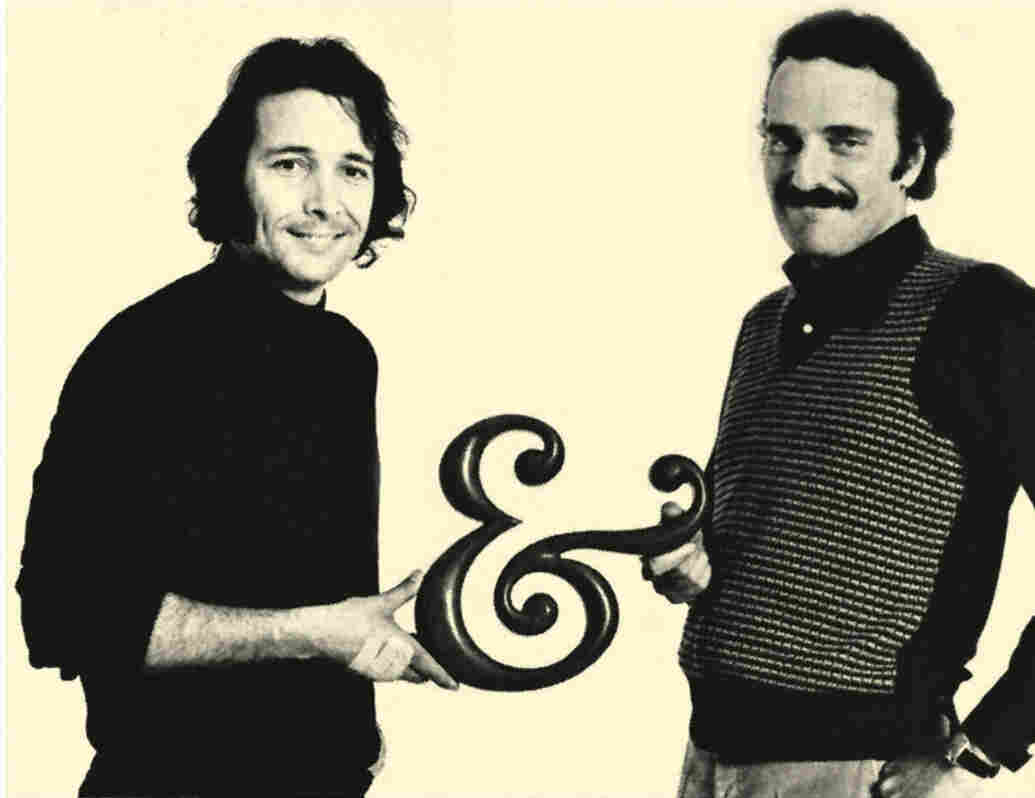 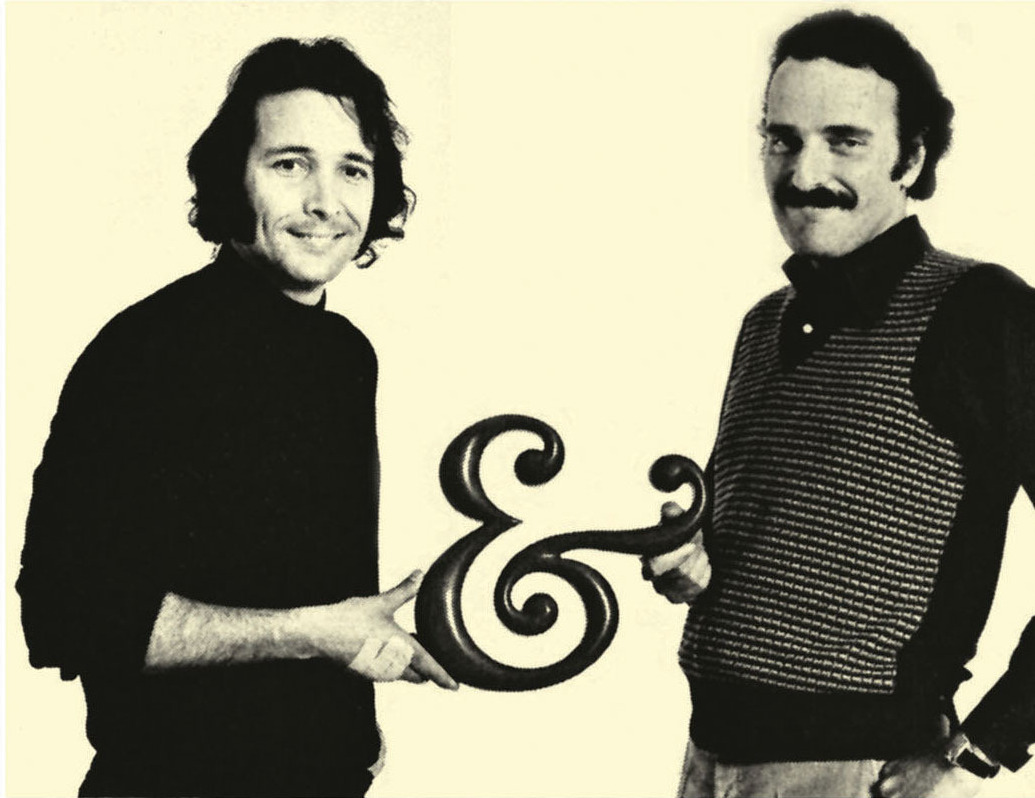 From the early 1960s to the late '80s, A&M was one of the most eclectic and powerful independent record labels in the world. The roster of artists who recorded there includes The Carpenters, Captain Beefheart, The Police, Joe Cocker, Suzanne Vega, Procol Harum and Janet Jackson.

This year marks the 50th anniversary of A&M's founding by trumpeter Herb Alpert and record promoter Jerry Moss. Among the first releases on the label was a song Alpert recorded in 1962 with his band, The Tijuana Brass, inspired by the bullfights he and Moss used to go to in Mexico.

"I was intrigued by the bass bands in the stands, announcing the bullfights," Alpert recalls. "I was trying to capture that feeling. Jerry came up with the name."

"The Lonely Bull" was the first hit for their fledgling record label, A&M (Alpert's and Moss' initials). The company was started out of Alpert's garage in West Hollywood. "We kind of wired it up a little bit," Moss recalls, sitting next to his partner. "There was a two-line phone in there and Herb, was it a two- or three-track Ampex tape recorder?"

In time, the partners moved their operations into offices that once housed the studios of silent film star Charlie Chaplin (today it's the headquarters of Jim Henson productions). Alpert says that from the start he wanted A&M to be something different from the cold, corporate record labels where he'd recorded before — something more personal.

"Jerry and I were in sync, not wanting to find the beat of the week," he says. "We wanted to find something that was unique, find artists that had something to say in a unique way. We weren't thinking of how much money we could make on each artist. We were just thinking about, 'How can we put out great records? How can we put out records that we would buy ourselves?' "

Alpert says he wouldn't necessarily have bought a Carpenters record himself, but A&M signed the duo in 1969. After receiving an unsolicited demo tape, he says he immediately he recognized the talent in Karen Carpenter's voice. 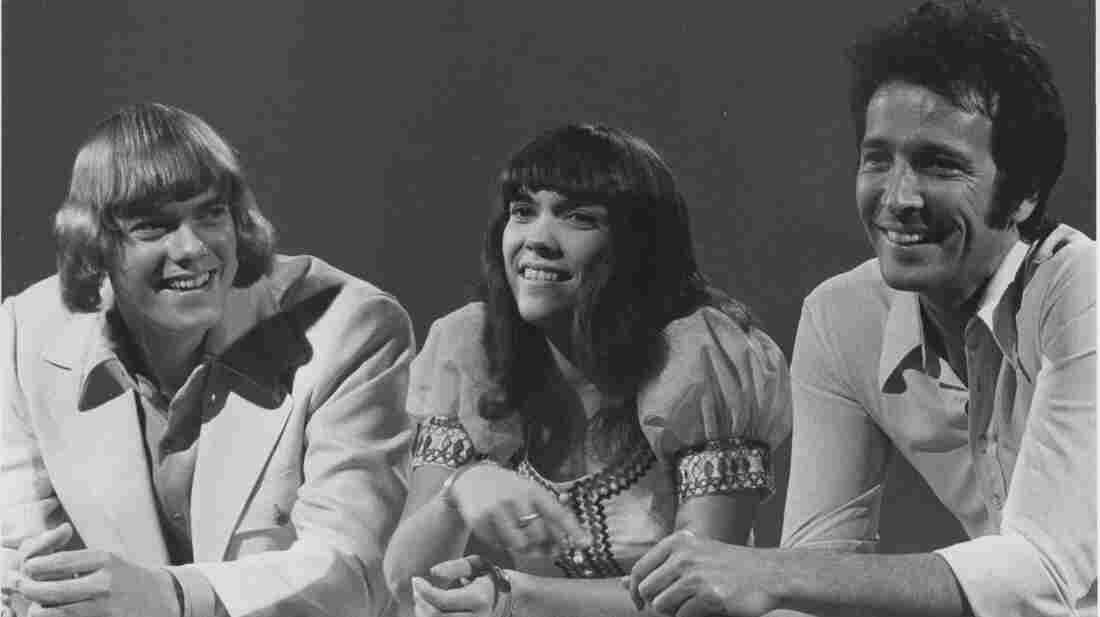 Herb Alpert with Karen and Richard Carpenter, whom the label signed in 1969. Courtesy of A&M Records hide caption 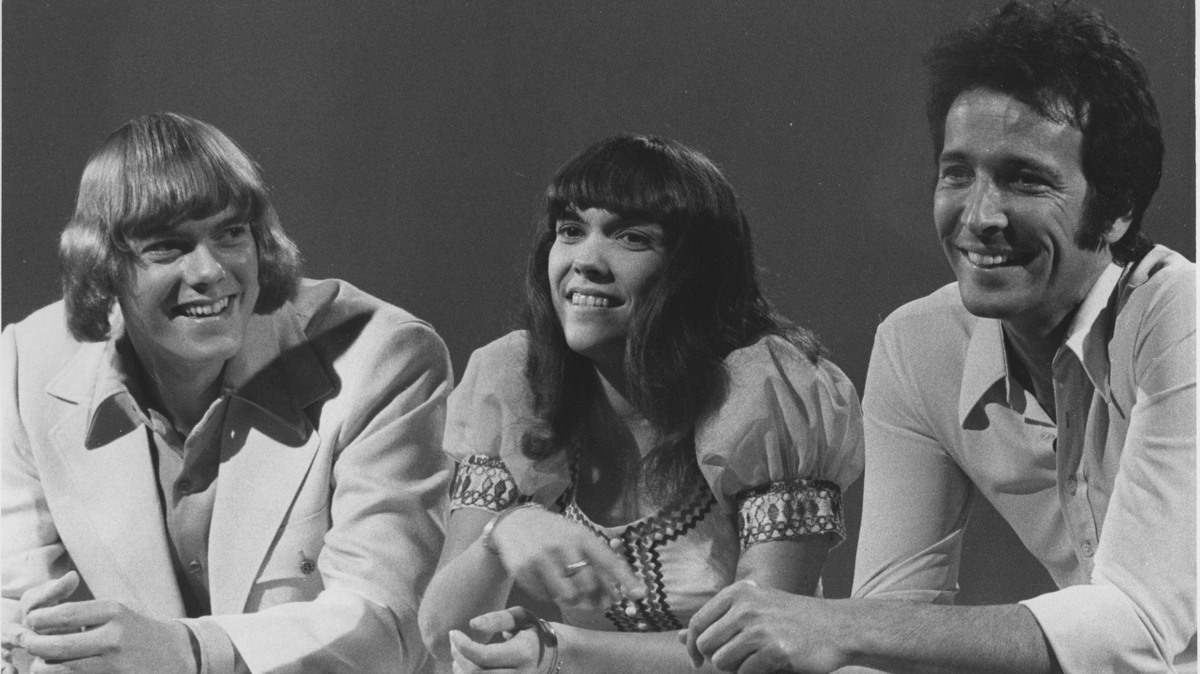 Herb Alpert with Karen and Richard Carpenter, whom the label signed in 1969.

"I learned something years back, watching Sam Cooke," Alpert says. "He showed me how to close my eyes and just go for the feel. He says people are just listening to a cold piece of wax and it either makes it or it don't."

The Carpenters went on to score 12 Top 10 singles. Their success, and that of other middle-of-the-road acts like Sergio Mendes and Brasil '66, allowed the label to sign or license less well-known artists like Joe Cocker and Fairport Convention.

"Every record was worth picking up, paying attention to," DiMartino says. "Track for track and numbers for numbers, artists for artist, A&M's accomplishments were fairly staggering. If you wanted smooth stuff, intelligent folksy stuff, they were very famous for sticking by their artists. If you wanted hard rock, particularly in the '70's, they had a lot of it."

"If there was ever the perfect label for a musician at that time, it was A&M," Frampton says. "They wanted the artists to become themselves."

Frampton says Alpert — the musician — and Moss — the music lover — were always available whenever he wanted to drop in and talk. And he says A&M's laid-back studios provided a family vibe.

"I never went to college, but I felt I was going to college at the A&M campus. That's what it was like," he says. "You'd see The Carpenters going into the studio and one day I saw Sting come in on a motorbike. It was the great place to hang out."

Frampton says he got to sit in on other musicians' sessions and was invited to help choose the cover art for his albums. "Word on the street was, 'We've never had it so good here,' " he says. "They never once said, 'You should do more of this,' or 'Don't do that.' They just let us do our thing. We made mistakes, and we learned by our own mistakes. And that's sort of unheard of now."

Frampton's third album for the label, Frampton Comes Alive, became the best-selling album of 1976. And just as it did with Frampton, A&M stuck with another artist until she finally scored a hit. From her home in England, singer-songwriter Joan Armatrading says success didn't come until her third album with A&M.

"If you think about that today, after that first album, I don't think I would have the second album made because people would probably be saying, hang on a minute, how come you haven't given us that song yet? And the second album came and they'd probably be saying, well, you've had two albums and you haven't done it, " says Armatrading. "So A&M were very much into nurturing artists."

Bryan Adams was just an 18-year-old Canadian singer when he got signed to A&M. "Those were great times," he recalls. "The record business was flourishing; radio was a force. The people who were involved were dedicated to building A&M — which at the time was just an independent label — into a major label. It was a label that took their chances with artists who weren't exactly mainstream until they found their niche. They took huge chances."

The label helped launch the careers of Joe Jackson, Suzanne Vega and The Police — as well as Sting. Producer Quincy Jones says he and many other jazz musicians also have fond memories of recording at A&M.

"Honey, are you kidding?" Jones asks. "We recorded 'We Are the World' there in the A&M studios, That's something you never forget." 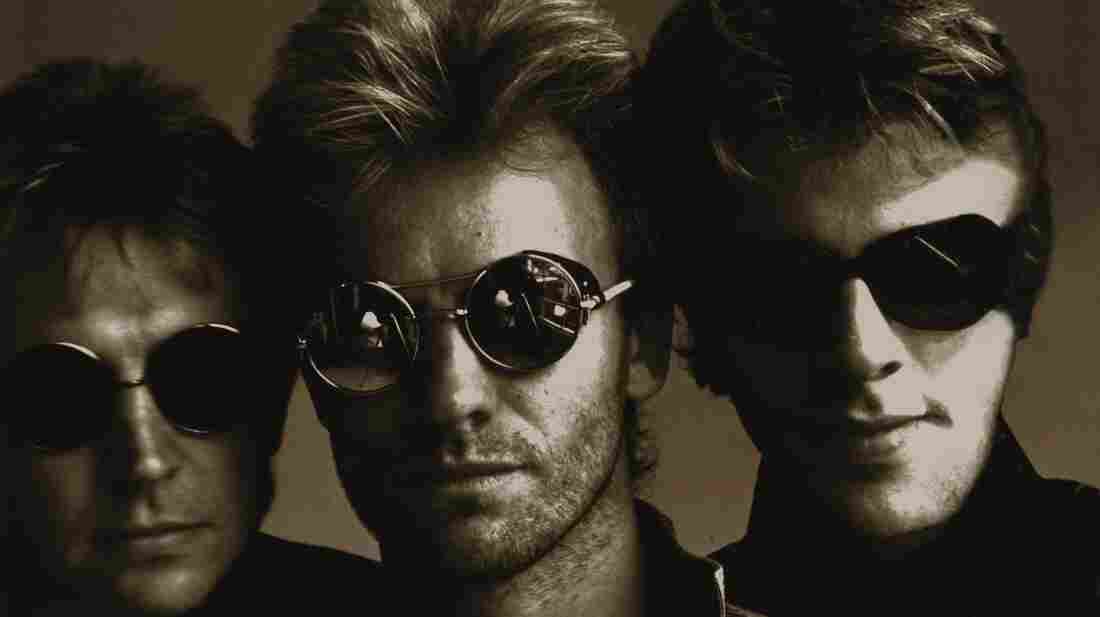 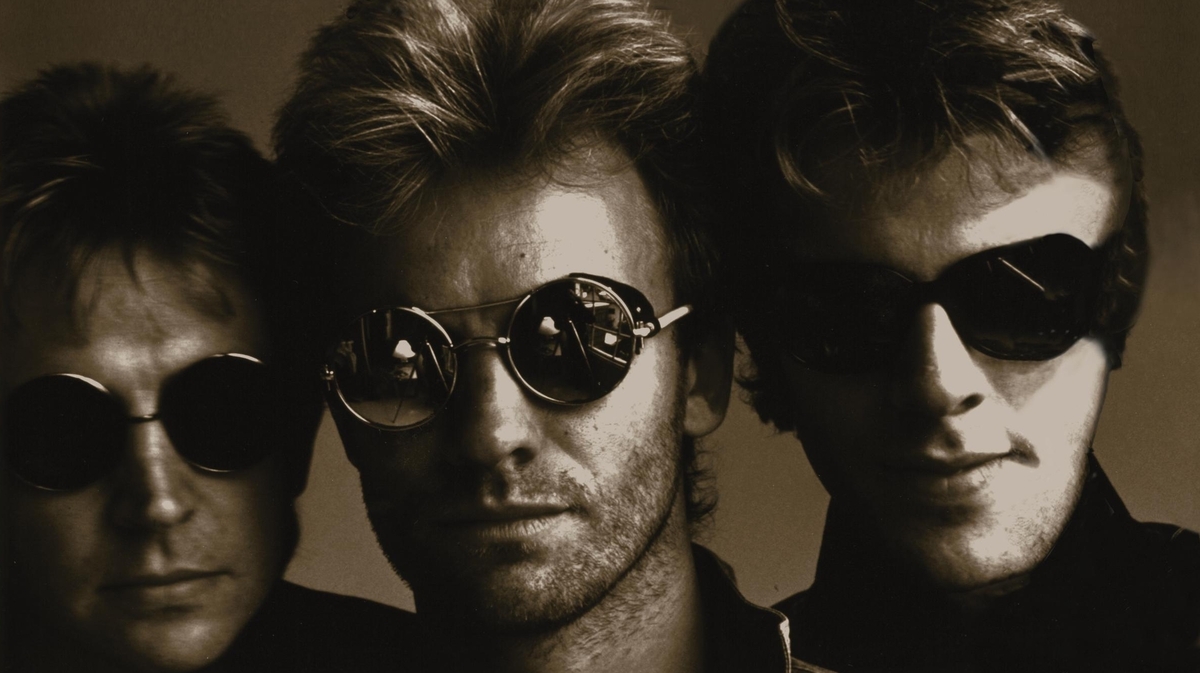 The Police's 1978 single "Roxanne" helped the band secure its deal with A&M Records.

End Of An Era

A&M continued to produce hits through the 1980s. But in 1989, Moss says, he and Alpert decided to sell their label to Polygram Records for half a billion dollars.

"It was sad because we really wanted to make it bigger," Moss says. "They bought the company, they said, 'No changes. There will be no changes. You guys can run it the way you feel like.' The first thing you hear is, 'Um, we're gonna close the Paris office.' "

Then A&M's New York offices were shuttered. Moss says he and Alpert managed the label for three more years before bowing out, unhappy with their new bosses.

"They didn't appreciate the founder's way, so to speak, of doing business," he says. "All of a sudden, they were taking away from us our individuality. And we thought, 'That's what you were buying, was the fact that we were different and unique!' "

Moss says they knew it was all over when, the week after he and Alpert sold the company, the new owners painted over murals — created by musicians from the San Francisco band The Tubes — on the outside walls of the recording studios. "Now why would anybody do that?" Moss says, shaking his head. "This is great art, this is important art. And they just whitewashed it. And it was like, 'OK, that's who they are, these people.' "

Moss and Alpert filed several lawsuits against their label's subsequent owners for violating an "integrity clause" written into the sale. The suits were settled years ago. Since then, Moss and Alpert have donated A&M's archives to UCLA, and in 2006 the partners were inducted into the Rock and Roll Hall of Fame.

Today, the label launched in Herb Alpert's garage is owned by the giant Universal Music Group, which has released a 50th-anniversary collection of A&M artists. To this date, nearly 600 of A&M's original albums are still available.