Accessibility links
It Isn't (Just) Ironic: In Defense Of The Hipster : The Record A recent article argued that irony dominates youth culture today, but "Thrift Store," a rising hit by Macklemore & Ryan Lewis, shows how misplaced that worry may be.

It Isn't (Just) Ironic: In Defense Of The Hipster

It Isn't (Just) Ironic: In Defense Of The Hipster 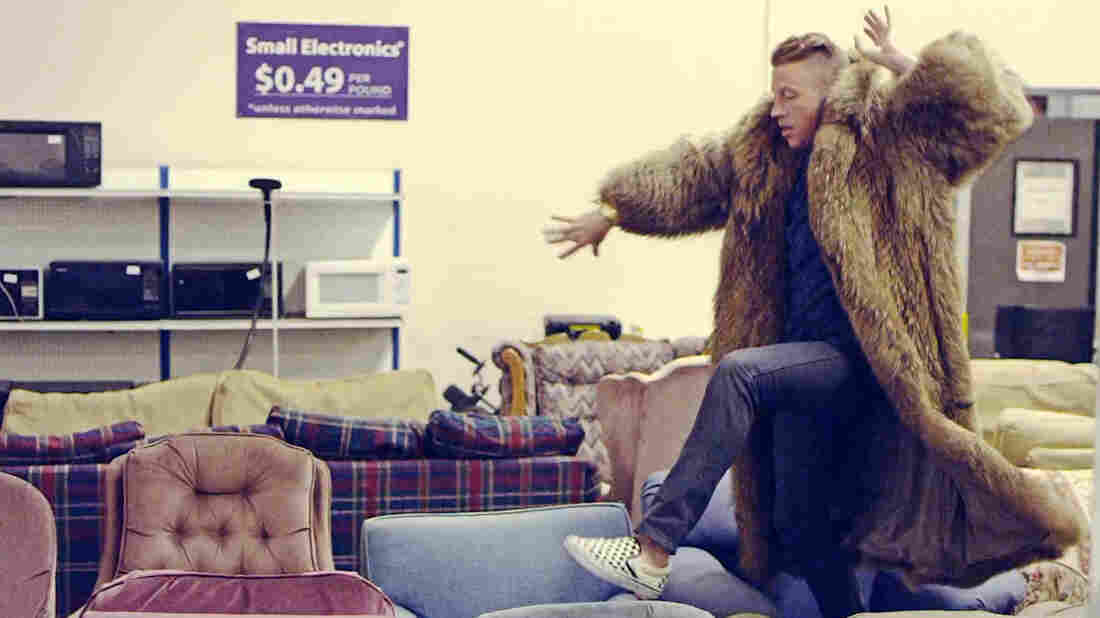 Yesterday I rescued something from the back of my closet: the first and only trucker cap I ever acquired. It's pink and adorned with a patch that reads "Milwaukee's Milk Producers" next to the stitched outline of a farm silo. The hat caught my eye at a Milwaukee Brewers game twenty-five years ago, sitting on the head of an actual farmer. I mentioned to this friendly bleachers neighbor that I found his headwear fetching, and he unexpectedly gave it to me. Score!

Why did I desire this silly, unflattering piece of kitsch — and why have I held onto it for so long? Princeton professor Christy Wampole, the latest cultural reactionary to make a splash with a screed against arts-driven youth culture, might say I have an irony problem. In "How To Live Without Irony," published Sunday in The New York Times, Wampole attacks contemporary bohemians (the common name now: hipsters) for trying to "negotiate the age-old problem of individuality, not with concepts, but with material things." Things like shirts or accessories inscribed with words and pictures — of a farm, for example — that mean nothing to the "contemporary urban harlequins" who wear them with a self-distancing snicker.

The blogosphere's first responders have already thoroughly dismantled Wampole's argument, from her obvious error in even trying to employ a term famously misused by Canadian pop stars and home-schooled wunderkinds, to more specific mistakes, like her assertion that the 1990s — defined, for many, by this album cover — were "relatively irony-free." I just have one thing to add to the outcry. It brings me back to that pink chapeau, and to a current hit that shows how misplaced Wampole's worry about irony poisoning may be.

"Thrift Shop," by the Seattle-based rapper-producer team Macklemore and Ryan Lewis, is a funny little number about the joy of scoring something cool in your local Goodwill. Strutting around a sweet sax line and a chorus sung by the churchy R&B belter Wanz — "I'm gonna pop some tags, only got $20 in my pocket" — it's an ode to resourcefulness, to getting fabulous even when you can't afford to touch the luxury items so often marketed through popular songs.

Silly celebrations of ridiculous finds (flannel zebra jammies, velour jump suit) share space in Macklemore's rhymes with an understated critique of consumer capitalism: $50 for a designer T-shirt, he points out, isn't such a bargain when six other people in the club will be wearing the same thing. "I call that getting tricked by business," he declares, confident that his fly used Velcro sneakers will help him just as much when it comes to getting girls.

"Thrift Shop" has been around since the summer, and its inexhaustible popularity is one reason The Heist, Macklemore and Lewis' just-released album, is a surprise chart-topper right now. (The other is "Same Love," a tender endorsement of civil rights for homosexuals that became the theme song to Washington state's recent successful marriage equality campaign.) The song made me a fan of the duo after a few years of being less than persuaded by their big-hearted but goofy style, partly because it spoke directly to my own long history of treasure-hunting in the Value Village bins. Besides provoking laughs, I think it illustrates that while the "hipster" attitude may include irony, there's much more to it. Here's how Macklemore's rhymes help refute Wampole's argument.

"I am stunting and flossing and saving my money and I'm hella happy," the rapper declares in between boasts about his green gator loafers and his wolf-head cap. In other words, Macklemore's found a way to be personally powerful without over-extending himself. Bohemians often live in a state of what the poet Philomene Long once called dedicated poverty. Rejecting stable career prospects, they eat instant ramen, live in buggy group houses and work service jobs (please tip your barista!) so that they have time to write music or start an urban farm or volunteer with Occupy Sandy. True, many are privileged to have parents they can fall back on if they get sick or just sick of it, but many do not, and anyway, in the moment they're genuinely cash-strapped. Haunting the thrift shop — the foundation of the "ironic" style Wampole decries — is fun for them, but it's also practical.

For Millennials like Macklemore and Lewis, thrift is often a generational requirement, not a lifestyle choice. Job prospects for youth have been in the tank since these 20somethings left high school. Revolutionary changes in creative industries like publishing and recording have made times even rougher for young artists or writers. Even young tenure-track professors like Wampole are none too secure. Meanwhile, especially for youth, luxury consumer goods have become crucial status symbols, often marketed in songs, movies and television shows themselves. Appropriating old stuff and twisting its meanings to suit you becomes a smart solution to the problem of not being able to rock the fancy stuff.

The scene in the "Thrift Shop" video is multiracial and hard to classify class-wise. Young bohemians tend to live in gentrifying neighborhoods, a controversial reality since the days when Puccini gave voice to Mimi expiring in her unheated garrett. There's plenty bad about the poor losing ground to real-estate moguls serving up-and-coming city dwellers. The challenge for bohemians is to engage with the diverse community their presence inevitably changes. The boisterous delight of "Thrift Shop" stems in part from its multicultural milieu — another way lived bohemia can differ from Wampole's fantasy of distanced hipsterism. Macklemore's idealized vision is one in which neighbors get to know each other because, why not? Close quarters can make new allies.

Using the absurd humor that's often mistaken for ironic by those outside hipster culture, Macklemore also connects his story with one that has many variations in rap: the up-by-your-sneaker-straps tale of rising above constricting circumstances. Often this narrative involves ghetto fabulousness — the risky choice to live beyond your means. But it can also be about exuding confidence even in tough times: "Man, we were just in the food court eating our gyros," Andre 3000 rhymes in Beyonce's song "Party," remembering his own humble origins. Macklemore's not even the first to play with the idea of cost-conscious swag. There's a two-year-old, minor viral hit about bargain hunting geniuses who stand out in finery from the discount chain Ross Dress For Less.

Beyond economics, the thrift store lifestyle and its more recent booming variant, artisanal culture, forges a link with history for young people with shaky cultural family ties. Snicker as you bite into the lovingly prepared poutine you bought from a truck, but also recognize that learning hands-on stuff, like food preparation or knitting or even mastering a fixed-gear bike, offers people a path out of the maze of chain stores and cold cubicles that dominates our daily lives. That path can lead to a mirage: Romanticizing the past is a convenient way to avoid its long-embedded problems, from racism and sexism to the drudgery of many working people's days. But insofar as these activities involve the body — moving in time-honored ways as you try a classic dance step or chop some wood — they can fix an alienated relationship with tradition, forging a link that's personal and real.

Thrifting does something else, too. It makes the rummaging enthusiast a pop archaeologist. Hip-hop itself is rooted in the same process of crate digging, assembling new styles and sounds from precious vintage scraps. "For real, ask your grandpa, can I have his hand-me-downs?" begs Macklemore midway through the song. For the rapper and Lewis, who are white, poking loving fun at the thrift store lifestyle is also a way of slyly acknowledging that some might question their musical appropriations.

That wish to be deserving of a legacy brings me back to my pink hat. See, my mom grew up on a farm in Wisconsin, a long way from the suburban home where she raised me in Seattle. Part of the reason I wanted that feed cap was because my life does flow from a line of dairy (and sauerkraut) producers. At what point does yearning overcome the chill of irony? For many hipsters, I think, it's when they find that thing at the thrift shop that their grandpa really might have worn. They might put it on as a joke, but they grow into it.