Accessibility links
A Critic Atones: Revisiting Lana Del Ray, Grizzly Bear And Taylor Swift : The Record List-making season has arrived and with it a mad rush to define the year that is almost over. Wouldn't it be nice if critics built a mechanism for acknowledging earlier mistakes into the process? 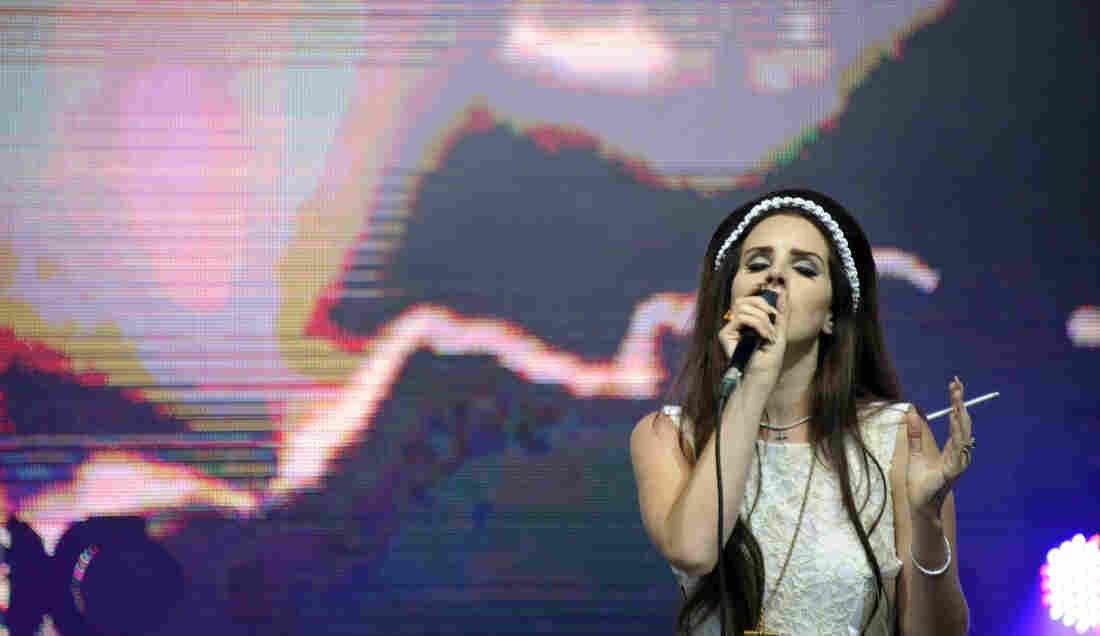 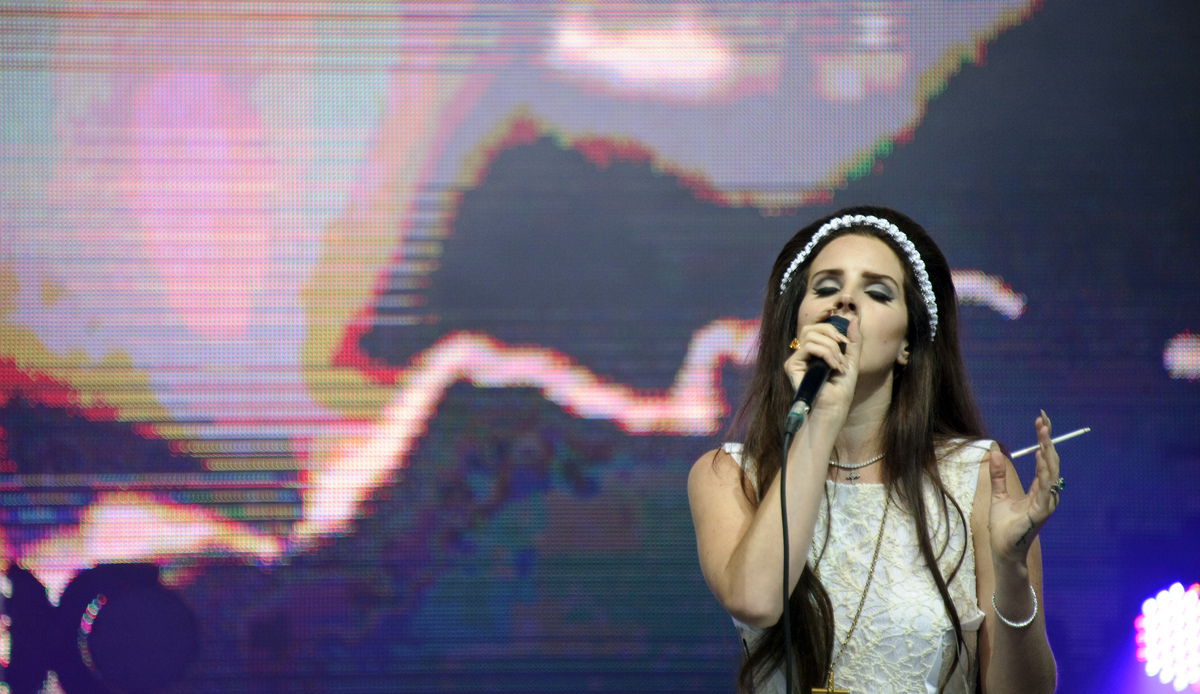 Lana Del Rey performs in France in July. Her album, Born To Die, came out in January, to mixed reviews.

It's beginning to look a lot like craziness — end-of-the-year craziness, to be precise. Now that Gray Thursday has officially reduced Thanksgiving to carbo-loading for the holiday shopping marathon, many people's winter holidays have become little more than a massive spinout. We're supposed to slow down; instead we gobble and run — consuming food, the spoils of shopping, and the pleasurable presence of each other, then speeding on to the next party or purchase without taking time to digest. The pause to reflect often only comes in the act of making lists. Checking them twice, we can contemplate our own needs and those of our loved ones. Sometimes a glimmer might break through the chaos: a dim realization of deeper wishes and needs.

Even organizing priorities, though, can turn competitive. Shared lists become status symbols. This is most true for critics, who are in part professional list-makers. By the time the turkey hits our tongues, we're already deep into the ranking game. (Keep track here, where David Gutowski of the Largehearted Boy website graciously aggregates most year-end music lists.)

What was the best album/film/television show/book/unclassifiable event of the year? Whose debut changed the game? What mattered? These choices are fundamentally personal, but once they enter the world, they form arguments that can quickly harden. In the midst of the holiday rush, critics can also forget to take a breath. The hunger to impress, to have the most original, brash, complete or simply authoritative list, can become as addictive as the urge to purchase.

The thing about authority is that no one wields it flawlessly. Making mistakes is a key part of learning, and if you want to stay good at what you do, learning never stops. Critics trying to absorb the vast fields about which they write can't help but fail, often: missing good stuff when it first comes out, overestimating mediocre work, and even occasionally making a grab for the truly heinous.

Year end critics' lists, however, don't usually include a mechanism for acknowledging mistakes. Partly this is because we're a prideful bunch, not eager to dwell on blunders. But the way we think of lists — as solid things, powerful because they are definitive — also undermines the process of self-questioning. Caveats can make a list seem weak.

Wouldn't a year-end list of favorites be more realistic if it somehow included a glimpse into what shifted in a critic's mind during a given year? I think so. In that spirit, I'd like to make a suggestion: let's incorporate a custom borrowed from a different New Year into our season-capping work.

The Jewish New Year is all about reflection. Atonement, central to the holiday of Yom Kippur, focuses on admitting transgressions and sins of omission. My daughter came home from Hebrew school in September with a piece of paper inscribed with blue ink; as instructed, she placed it in water and watched her sins fade into liquid turned azure. This ritual wasn't just about forgiveness, but about realizing the impermanence that both haunts and opens up every decision. I wonder what my fellow music critics would write on that slip of paper and let wash away?

At 2011's conclusion, I joined in the feeding frenzy that descended on the definitely-no-way-indie singer-songwriter Lizzy Grant, questioning not only her right to call herself an artist but her very life force. I called her "dead!" Her fascination with female passivity still doesn't appeal that much to me, but I think she's genuinely dedicated to teasing out the subtleties of the stance, as some of her newer songs suggest. I admit I joined in the public stoning of Del Rey partly because it was easy — her awful Saturday Night Live performance in February seemed to justify the building vitriol — and partly because she struck me as creepy. But creepy can be interesting, and a serious critic makes the effort to explore it more thoroughly than most Del Rey haters did.

2. I allowed my knee-jerk suspicion of what's cool get in the way of appreciating some good stuff.

Grimes's Visions struck me as silly. Death Grips boomed through my car speakers and made my teeth hurt. Grizzly Bear's Shields seemed so overly doused in 1970s-rock fulsomeness, I couldn't take it! In reality, I had a hard time absorbing these albums because I knew that they were favorite children of the hipster crowd. My contrarian impulses sometimes poison my listening process. I've fully come around to Grimes and Death Grips — grasping the depth of the former and the ambitiousness of the latter — and while Grizzly Bear's still too rich for my taste, I respect the band's balance of skill and inventiveness. I fear I will never get Animal Collective, though.

3. I let my rap listening coast a bit on the strength of the Killer Mike and Kendrick Lamar albums.

Like jazz and world music, rap — not hip hop-inflected pop, but serious rhyming — is a genre that non-experts like me can struggle to absorb. There's so much of it, especially in the age of the mixtape. Furthermore, the referential essence of the art means that if you don't thoroughly know your history and keep up on current hot topics, a rapper's skillfulness might elude you. Like many non-expert but appreciative surveyors of the field, I'm prone to checking rap off my to-do list once I've found a couple of albums I know I like. Killer Mike's R.A.P. Music offered political smarts and tight production in the spring, and Lamar blew everyone away with good kid, M.A.A.D City in the fall. But there's also a pool of rising talent that demands further critical assessment, from Future and Azealia Banks to the just-surfacing Robert Raimon Roy. I need to put in time with them. (I feel the same way about country, by the way: Digging Jamey Johnson's latest effort isn't enough.)

4. I've only listened to Taylor Swift's Red all the way through, attentively, once.

Now, plenty of readers will not consider this a mistake — Swift is just treacle to them. But as someone who takes pop seriously, I shouldn't ignore the biggest-selling new pop release of 2012. I know Swift is growing out of the princess persona that's long struck me as facile and, frankly, no gift to her young female fans. She's getting sassier and more complicated. Or so I'm told by virtually all of my pop-savvy pals, who think I really need to stop equating her with the prom queen types who always laughed at me in high school, and respect her as the artist and titanic music-biz force that she is. I have to admit that she's far from the only pop star to ride to the top on boy craziness, and I need to take Tay's advice and begin again with her.

5. I should have made more of a fuss about some things I liked this year.

Music, like every form of information, flows by so quickly now that it's virtually impossible to linger too long over anything — including stuff that's worthy of more than a Tweet. I'm the kind of critic who focuses on cultural trends and big ideas, and sometimes ignores the simple pleasure of a great hour spent listening to something new. I wish I'd told you that in 2012, I had hours like that with old favorites like Mark Eitzel, Meshell Ngdeocello and the Mark Lanegan Band, and new voices like Michael Kiwanuka, John Fullbright and Meklit & Quinn. I also often danced in my kitchen to African music. Early New Year's resolution: have more fun. And tell you all about it.