Accessibility links
R. Kelly's Queer, Campy 'Closet' Reopens : The Record The R&B singer recently unveiled new chapters in his Trapped in the Closet series, a hybrid of music video and soap opera whose narrative is powered by sexual secrets. 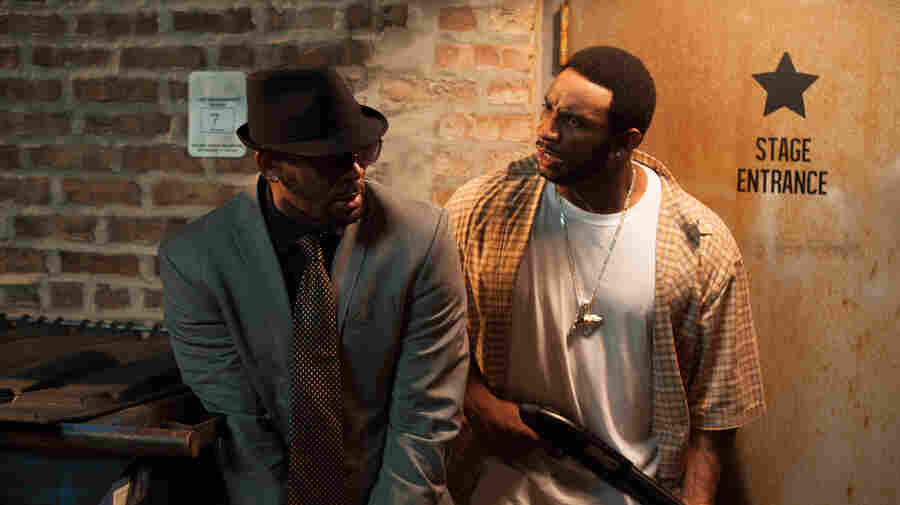 R. Kelly (left) as Sylvester, and Eric Lane as Twan, in Trapped in the Closet, which relaunched with new chapters last week on IFC. Parrish Lewis/IFC hide caption 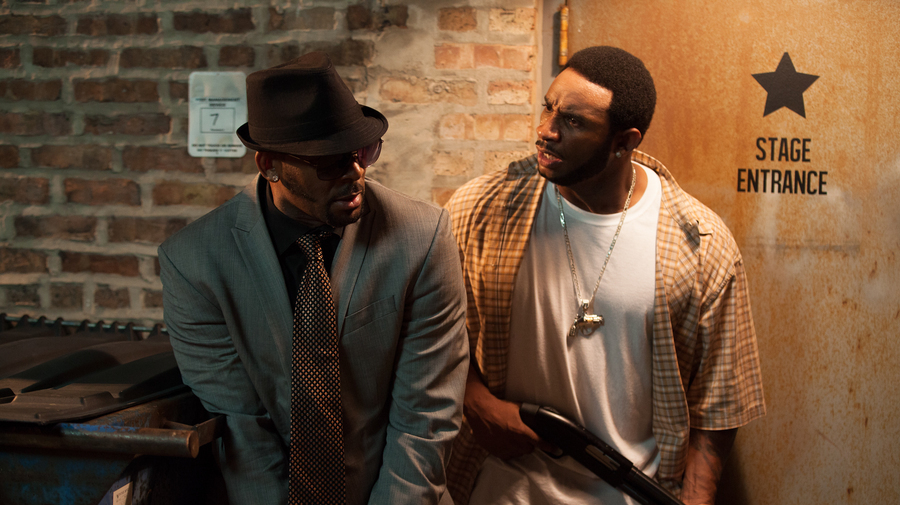 R. Kelly (left) as Sylvester, and Eric Lane as Twan, in Trapped in the Closet, which relaunched with new chapters last week on IFC.

There's really been nothing like Trapped in the Closet ever before.

R&B star R. Kelly has been making (and remaking) a series of short music videos that tell a flamboyant narrative in less-than-five-minute installments. The first batch of several dozen appeared online in 2005. Now, there's a total of 40 "chapters" that aired last Friday on IFC, with the latest ones being released online one at a time for the next week.

"He's really an experimentalist and a kind of innovator," says Jason King, a professor of recorded music at New York University's Tisch School of the Arts. King describes Kelly, who's been nominated for 23 Grammys and sold almost 40 million albums, as one of the most important figures in R&B over the past quarter century. With Trapped in the Closet, he says, Kelly has synthesized a variety of genres, starting with soap operas.

"Also with ... traditional operas, which are extraordinarily melodramatic themselves, with the cliffhangers, with the telenovelas, with chitlin' circuit black theater. He takes all these aesthetics and puts them together in this series."

It's impossible to coherently explain the plot of Trapped in the Closet. Suffice it to say, a one-night stand opens up a risque world heaving with camp excess and almost 30 characters, ranging from a little person who's a stripper to a supposedly heterosexual pastor involved secretly with a man.

"R. Kelly's always been fascinated by the down low," King observes, pointing to an early Kelly song.

But an R. Kelly narrative driven by sexual secrets is a turnoff to Paul Resnikoff. The publisher of Digital Music News remembers the highly public allegations that led to multiple counts of child pornography being filed against Kelly about 10 years ago. The singer was accused of making a demeaning sex tape with an underage girl.

"I really don't understand how certain personalities and superstars tend to move beyond the most lurid and horrific aspects of their past," Resnikoff says.

Kelly was acquitted of all charges.

King says the singer is using Trapped in the Closet to create a counternarrative that brings aberrant sexuality into the open.

"So R. Kelly is seen as a sort of veiled, duplicitous figure by some," King says, "and by others, this really cunning strategist who manages to synthesize all of these issues in pop culture and put them into his videos."

R. Kelly's fans would love to see Trapped in the Closet as a redemption narrative. Sawyer Carter Jacobs, 26, is a law student who's followed the series since he was a freshman in college. He sees Kelly consistently delivering powerful moral messages amid the rococo romping of cops, drug runners, pastors and pimps.

"Keeping religion in your family," Jacobs offers as one example. "And keeping a strong bond between you and your wife, the relationship you can have with your [ex-convict] brother-in-law."

Part of what hooked Jacobs about Trapped in the Closet is not what it is, but what it isn't. It's not a TV show or a movie or a record.

"It just ... is," he says, adding that in some ways, the series is perfect for a generation that lacks allegiance to any single way of consuming music or TV. "This exists across all planes and really can be seen or told anywhere."

Perhaps soon on Broadway: R. Kelly has expressed interest in turning the spectacle into a live musical. And he plans to produce at least 85 more episodes.