Accessibility links
Reflecting On EMI, An Industry Giant Felled In 2012 : The Record In the music business, 2012 may be remembered as the year the weakest of the major record labels was swallowed up by the others. The demise of EMI raises big questions about the future of a business now dominated by just a few players. 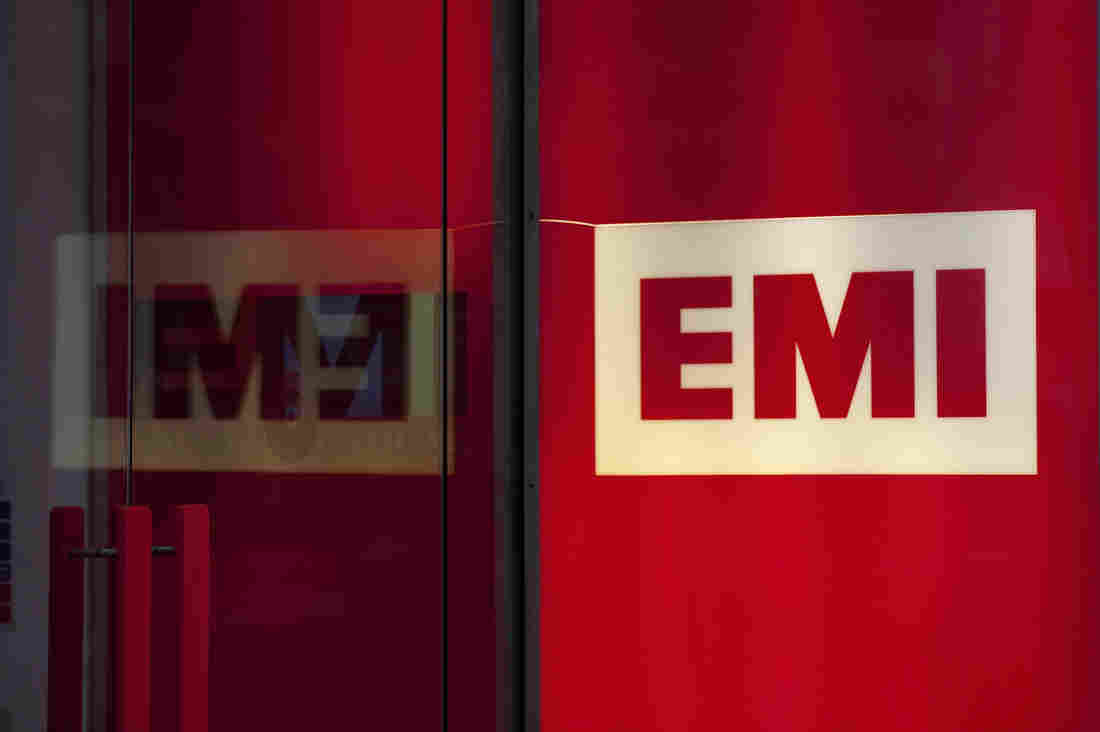 The London headquarters of EMI, whose sale this year brought the number of major labels from four to three. Simon Dawson/Bloomberg via Getty Images hide caption

It's hard to overstate how much the name EMI means in the UK. The record label of The Beatles — and later, The Rolling Stones — is even immortalized in a song by another EMI artist, The Sex Pistols. Brian Southall, who worked at the label in the 1970s and '80s, says its glory days were marked by excess as much as success.

"It was an extraordinarily powerful company," Southall says. "We had a lot of money to spend, and we spent it. We had parties for ludicrous things, as I recall. We even had parties that people didn't turn up at. I think Pink Floyd famously never turned up at any parties we had to launch their albums."

EMI can trace its history back to the beginning of the music industry, when Emile Berliner started the Gramophone Company in 1897 to manufacture the first sound recordings on discs. The company renamed Electric and Musical Industries came to dominate classical music, and later popular music sales in the UK.

But that was then. Brian Southall wrote about EMI's decline in his book, The Rise and Fall of EMI Records. He says the decline had a lot to do with the contraction of the music industry in the last 10 years, but that it began even before that. EMI had merged with the consumer electronics company Thorn. Then the two parted ways in the 1990s — meaning that, unlike its competitors (say, Warner Brothers or CBS), EMI was just a music company.

"If you compare that with the giants of the day," Southall says, "these were companies with fingers in lots of pies and weren't dependent solely on the record industry having a good year. So EMI was left exposed, basically, on the idea that as long as records kept selling, EMI would continue to be profitable."

But record sales today are roughly half what they were a decade ago. And this year, EMI was broken up. Its music publishing division went to Sony, while its recorded music label was sold to Universal Music Group for just under $2 billion. Many of the label's biggest artists had long since jumped ship for a more independent life, including Paul McCartney and Radiohead.

More On The EMI Sale Saga

And Then There Were Three: Universal Will Buy EMI

The Internet has made it possible for artists of all kinds to bypass labels and take their music directly to the audience. But the majors still have a lot of power, says Casey Rae, deputy director of the nonprofit Future of Music Coalition in Washington, D.C.

"People keep saying that the major labels are dead, or dying," Rae says. "But if that's the case, it's more like the walking dead. It seems like they might be irrelevant to the average person, but they they still have tremendous influence over the contours of this developing digital marketplace."

Specifically, Rae and others worried that Universal could stifle new digital services by charging too much to license its recordings. They argued against allowing Universal to buy EMI because that gives one label roughly 40 percent of the market for recorded music. Martin Mills is chairman of the Beggars Group, an independent label based in London.

Mills says Universal already has a reputation for charging huge licensing fees to start-up companies — in effect, strangling new digital music services in their cribs. He points to the example of Beyond Oblivion, a music service that never launched, despite paying lots of money to Universal and other major labels.

"I mean, that company burned through 100 million dollars in license fees and never actually got off the ground. And a big chunk of that was Universal," Mills says. "So when digital services launch, you want them to launch with enough marketing funds and promotional budget to make a dent in the market. And when they've had to give money to get the license fees, it means they're less likely to succeed."

And Mills says fewer choices is bad news for consumers. Universal's market share seemed to make European regulators nervous, too: They're requiring the company to sell off parts of EMI's catalogue, including the Parlophone label, as a condition of the takeover. (Although Universal does get to keep The Beatles.)

Universal CEO Lucian Grainge declined to be interviewed for this story, but he did testify before a US Senate committee before the deal was approved. Grainge denied that Universal would try to put any digital music services out of business, saying, "To dissolve the market would be commercial suicide. We're here to invest in EMI, to create more music, to create more options, and to create more platforms so that the music can be discovered and sold to legitimate fans."

But it's legitimate artists already signed to EMI who may have the most to lose in this takeover. Brian Southall says major labels are increasingly focused on hit singles, to the exclusion of almost everything else.

Still, parting ways with a major label may not sting quite as much as it used to: Just ask Paul McCartney and Radiohead how it's working out for them. Even back in 1977, the Sex Pistols didn't give a toss.