Accessibility links
The Drummer Queen Who Runs Nairobi Dancefloors : The Record She's formidable in both Swahili and English, lunging and stalking over a smeary, funky-drummer, triphoppin' groove, jazzed with psychedelic synthesizer stabs. 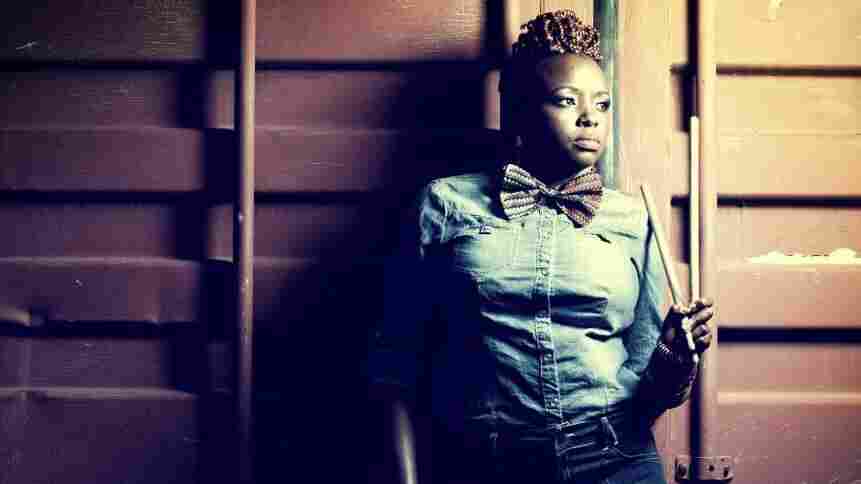 Muthoni the Drummer Queen, aka The Bauss Lady. Courtesy of the artist hide caption 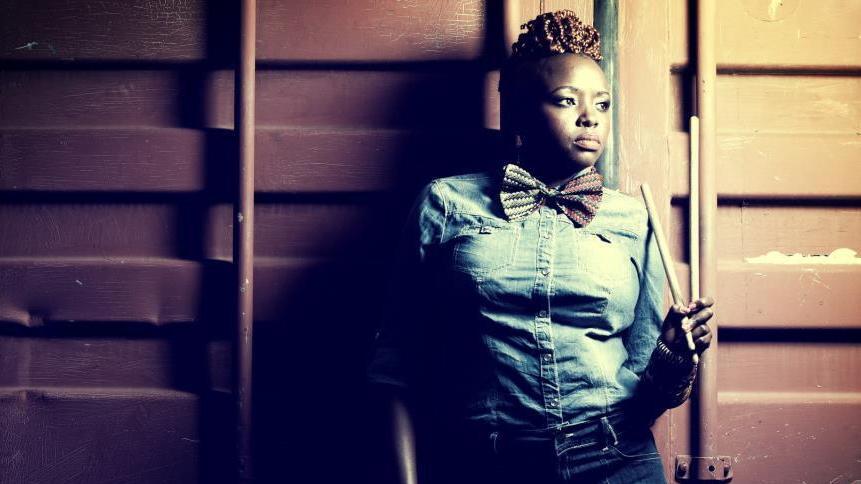 Muthoni the Drummer Queen, aka The Bauss Lady.

Muthoni the Drummer Queen's Anglo-Swahili "Vile Inafaa." is not yo' mama's "Hakuna Matata." With her saturnine sidekick, the rapper Octopizzo, the triple-crowned singer, rapper and drummer throws a dynamite dance party on an industrial rooftop in the video for her single. Illustrating how U.S. rap has become a template for urban living everywhere, the visual tropes fit accepted hip-hop conventions — but with an African twist in the energetic stomping lines of dancers.

Otherwise known as Muthoni Ndonga, aka The Bauss Lady, our Drummer Queen flashes parrot colors and skate-punk hair. In Nairobi's dance scene, blogs bubble about her spark, and she is revered for the flexibility of her style, from a capella to dubstep. To see her drumming, a real percussion queen, in the video for "Mikono Kwenye Hewa" from her album The Human Condition is to know that Muthoni's not messing.

On "Vile Inafaa" she and her vocal partner from a sometimes strife-torn environment share a tough, no-nonsense edge. You can feel it in her slightly sinister opening taunt, "Hello hello, kumbe huku ni matanga" — "Hello, hello, there is a funeral here."

Kenyan rap, often called Sheng after a specific dialect, occasionally slips into the American mode, but generally sticks to Swahili. Muthoni and Octopizzo are formidable in both languages, lunging and stalking over a smeary, funky-drummer, triphoppin' groove, jazzed with psychedelic synthesizer stabs. Flipping from boldly rapping lines like "Kumbe ndio kupatia msoto notice ini hame" (I give poverty notice so that it gets out), to husky singing on the tidal hook, jumping midbeat from Swahili to English, her command is imperious. Muthoni is ready for anything.

And in their video Muthoni and Octopizzo bring the night life into daylight. They're shot on a rooftop in an industrial area. Graffiti on corrugated iron gleams in the bright Nairobi sunshine. Skateboarders soar, breakdancers pop on a big plastic mat; here is the sound and style of Kenya's underground and streets captured high in the sky, propelled by our stars' drama.

With a visage as finely sculptured as an ebony Makonde tribal mask, Octopizzo wears his oversize baseball cap like a lopsided crown. Beads swing round his neck alongside a gold chain. In the bio on her website, Muthoni refers to previous lives spent as a polar bear and a Chinese dumpling maker, among others, without revealing much about this incarnation. In his, though, Octopizzo claims his roots: He was born Henry Onyango Ohanga, in Nairobi's Kibera, which he describes as "the largest slum in Africa," though that sad distinction has been disputed.

America's housing projects are luxurious compared to the infamous Nairobi slums, but there are points of connection: Both are on the front line of creativity as well as material deprivation, social unrest and confrontation. Rather like NYC projects (Nas hails from Queensbridge, Jay-Z represents Marcy), particular Nairobi slums also have their own hometown heroes. While music fans here query the feeble state of protest music, the tribal wars that still threaten to rip Kenya apart have made artists who talk about peace, like the versatile Juliani from the Dandora slums.

So Octopizzo proudly brings pizzazz to Kibera. Local online gossip sites hint at beef with fellow Kenyan rappers, accuse Octopizzo of glorifying Lucifer in his songs and even of belonging to the secret cult, the Illuminati. But whether or not Octopizzo flirts with somber powers, a la Robert Johnson, he is also involved with the NGO Uplifting Men and Youth in Africa, mentoring and doing arts education among the kids of the slums. In the true spirit of working with what you've got, Octopizzo also has a "slum tourism" company, showing visitors the gleaming city's underside and creating employment at the same time.

As the Drummer Queen and her consort Octopizzo rap about the comfort of cash the vaunting, incisive energy of their determination and the bravado of their skills are eloquent of a new generation that is rising in Africa.

Kenya has no formal pop chart system. For this piece, I am particularly indebted to entertainment journalist Catherine Mukei, of The Star newspaper, who kindly organized a Top 5 playlist based on dancefloor, radio and call-in contest popularity, the barometers of the Kenya music scene.

Further thanks are due to Nick Reding and Krysteen Savane of SAFE, Kenya's leading Arts For Social Change project. Many of Kenya's top artists will be featured on the soundtrack of their latest feature film NI SISI (It Is Us).