Accessibility links
Patty Andrews, Leader Of The Andrews Sisters, Dies : The Record Andrews was the youngest of the boogie-woogie sibling act, which played more USO tours during World War II than anyone besides Bob Hope. She was also known as the most charismatic of the trio. 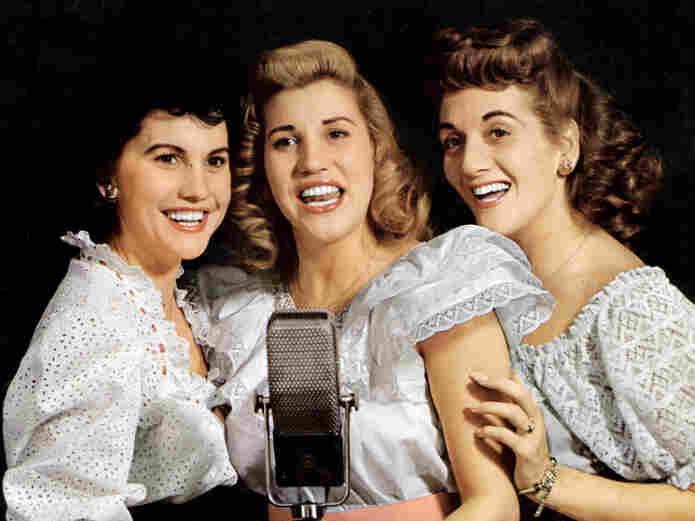 The Andrews Sisters (from left, Maxene, Patty and LaVerne) in the 1940s. Patty was the star of the sibling act. GAB Archive/Redferns/Getty Images hide caption 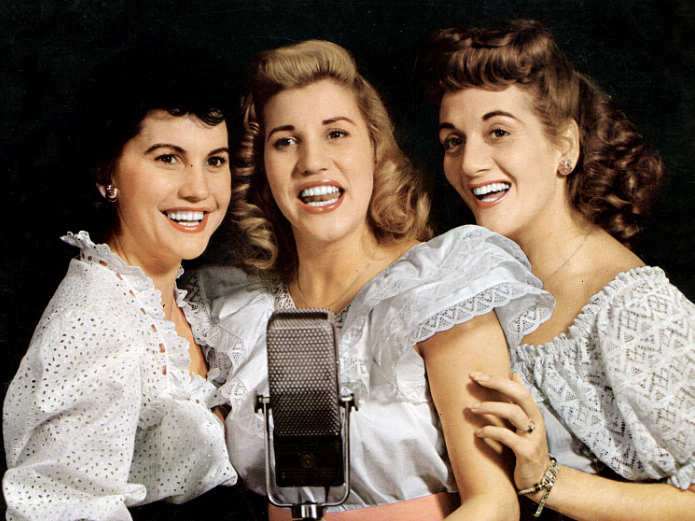 The Andrews Sisters (from left, Maxene, Patty and LaVerne) in the 1940s. Patty was the star of the sibling act.

Patty Andrews, the last surviving member of the Andrews Sisters trio, died of natural causes at her home in Los Angeles on Wednesday, according to her management. She was 94. The group's career spanned more than five decades and resulted in 90 million records and 46 top 10 hits.

The youngest of the sisters, Patricia Marie Andrews was just 19 when the trio became an overnight sensation crooning "Bei Mir Bist Du Schoen," a tune originally written for the Yiddish theater. Patty not only sang lead; she was clearly the star of the group.

"Patty was an outstanding presence. She was the leader; she was the one that your eyes would focus on," says Joel Whitburn, founder of Record Research, a company that's tracked Billboard's popular music charts for almost 40 years. "She just seemed to effuse that warmth and personality and charm and smile — and vigor — more so than the other two sisters."

By the onset of World War II, the Andrews Sisters were at the top of the charts. As the troops headed overseas, the sisters were drafted into service in their own way, playing more USO tours than any other entertainer besides Bob Hope. They also recorded morale-boosting "Victory Discs" for distribution to Allied forces, one of which featured their signature hit, "Boogie Woogie Bugle Boy."

The trio became synonymous with the war effort. They were getting ready to perform outside Naples, Italy, for troops headed to the Pacific when Patty was handed a piece of paper to read. As her sister Maxene told NPR in 1993, Patty "opened up this piece of paper, and she looked at it, and then she started to cry. And she said, 'Boys, the note reads here — the war with Japan is over.' "

Patty Andrews had a strong desire to stand out and didn't like that her career identity seemed permanently tied to the Andrews Sisters. She made the first of several attempts to launch a solo career with 1950's "I Wanna Be Loved" — but her sisters sang backup, and the song was officially released as an Andrews Sisters recording. Patty's solo aspirations caused the trio to break up in 1953, though they reunited a few short years later.

After LaVerne died of cancer in the late '60s, the remaining sisters continued as a duo. Maxene died in 1995. But it's possible that Patty's most fulfilling partnership was with Wally Wechsler, to whom she was married for more than 60 years.

The influence of the Andrews Sisters looms large over the last half-century of music: Their catalog, some 1,800 songs, has been thoroughly mined by other artists. In 1972, Bette Midler introduced "Boogie Woogie Bugle Boy" to a new generation of music fans with her own hit version. And just a few years ago, Christina Aguilera's "Candyman" gave a clear tip of the hat to the tune — and its makers.

In the audio of this story, as in a previous Web version, we identify "Bei Mir Bist Du Schoen" as a Yiddish folk tune. It was actually written for the Yiddish theater.