Accessibility links
The Roots Of Beyonce's Super Bowl Spectacular : The Record Sunday's display of imperial charisma comes off as a historical inevitability, and as something that benefits us all. It's an illusion, but what a substantial one. 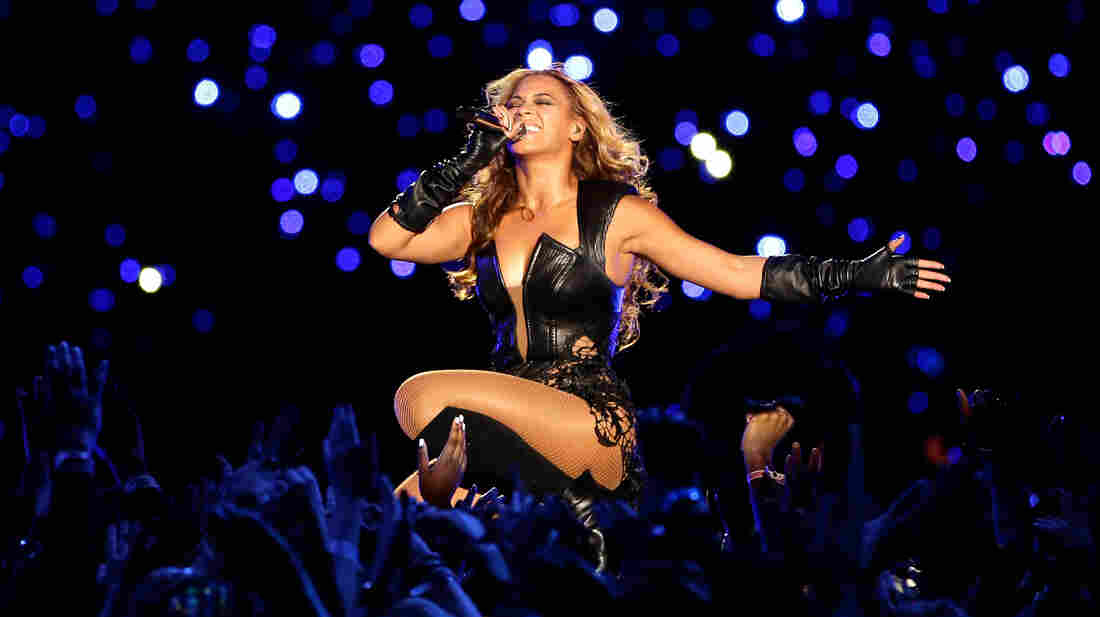 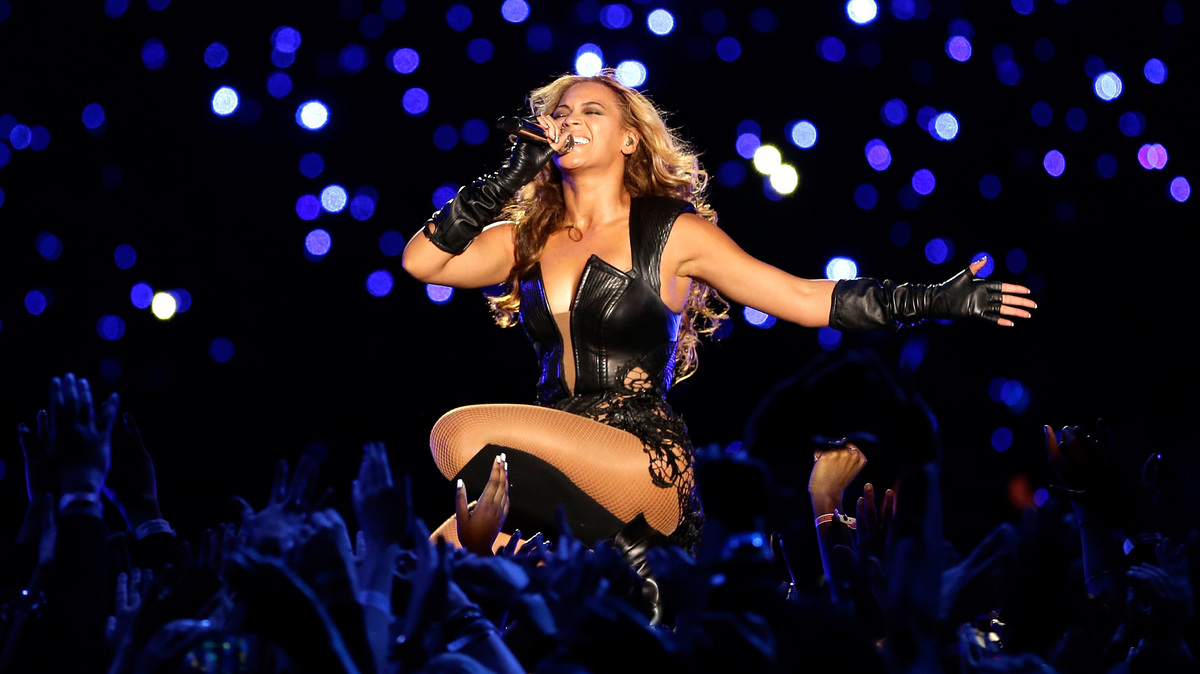 One of the Twitter hashtags devised by rabid Beyonce fans before last night's Super Bowl halftime show was religious in nature: #praisebeysus. Praise Beysus! This bit of hyperventilating resonated in interesting ways. Strutting into the very center of America's biggest television spectacle, the 31-year-old superstar intended to secure her place in the musical pantheon next to recent Super Bowl-approved legends Madonna, The Who, Bruce Springsteen and Prince.

And that's not all. For the Beyonce who quelled accusations of lip-synching after singing Obama's inaugural national anthem by sweetly explaining she just wanted to do right by her president and then climbing that Mount Rushmore of songs a cappella at a recent press conference, it's no longer enough to be a king. Taking on that masculine title made it clear that she considers herself an equal to her hip-hop royal husband Jay-Z — now she would be more.

This performance would also help her transcend the term "goddess," that oddly trivializing term bestowed on far too many of her female peers and predecessors in the glamour game. If Beyonce nailed this one, she would be a god: a savior of pop, an icon to worship, the ultimate. It isn't easy to be the ultimate within a music industry that's all about fragmentation and diminishing returns. But Beyonce is old-fashioned that way. She believes in spectacle, and in being singular, and in uplifting those around her by inimitable example. She believes, Praise Beysus, in nailing it. And she did.

"Praise Beysus" also works as a wry reference to the inheritances that feed Beyonce's art. It's the kind of shout you'd hear in a gospel church. Like so many of her peers (male and female), Beyonce was a child performer, not a church kid. And yet her performances are most firmly rooted in the sounds of the church and the steps of African-American dance. Of the top 10 current highest-earning female pop artists, she is one of two who obviously looks to rhythm and blues and soul queens like Aretha Franklin and Etta James for inspiration; the other, Adele, is white and British. For all her love of Barbra Streisand and obvious connections to hip-hop, Beyonce now is the biggest star carrying forward the musical legacy of her race. She seems to genuinely be a favorite of the Obama family, but as a crossover star who still sings from an identifiably African-American place, she's also a canny political choice for them.

She dances from that place, too. Beyonce's Super Bowl performance utilized dazzling technology, showed off her still-cool all female band, and promised the reunion of her original group, Destiny's Child. But at heart it was all about those moves. Beyonce's rump shaking and knee knocking may trigger a noticeable libidinal response in many, and strike fear in the parental hearts of some. In its Super Bowl edition, it also nicely honored the host town, home of the spectacularly bootylicious bounce music scene. But it's neither merely instinctive nor an example of video girl-era exhibitionism.

In fact, the shimmy, the Black Bottom, the Quiver and the Funky Butt — the building blocks of what Beyonce does so well — were popular at the turn of the 20th century, and themselves are rooted in the traditions slaves kept alive beyond the Middle Passage. All rock-and-soul era dancing stems from this stuff, of course; but as her Super Bowl routine so memorably demonstrated, Beyonce gets the connection like nobody else. She invokes the madcap, revolutionary spirit of the first great generation of African-American female stars of vaudeville and the cabaret: women like Josephine Baker and Ethel Waters, who once attributed her early success to her "completely mobile hips."

As a prime mover in the hip-hop era, Beyonce connects these fundamentals to today's street dances and stepping competitions. But she is easily as interested in how greats from Michael Jackson to Lena Horne absorbed and transformed those vernacular moves. Something similar happens in her sound, which often works like African-Americana, incorporating marching bands, the Aretha of Sparkle and "I Say a Little Prayer," and the sassy harmonies of the swing era alongside more contemporary beats and studio tricks. Last night, when Destiny's Child harmonized on their famous line, "I don't think you're ready for this jelly" — a lyric that invokes both the sensuality of classic blues and the loose-limbed sound of early jazz — it all suddenly made sense: Beyonce, the showbiz kid, has worked her whole life for this moment, where she can fully represent an entertainment lineage that inevitably leads to her.

Beyonce's Super Bowl triumph comes at an apex she seems to have planned for but perhaps couldn't have anticipated. As the pop world's mirror couple to the Obamas, she and Jay-Z embody not only remarkable personal achievement — he's the black Horatio Alger, she's the American Girl — but also racial pride and gender equality, at a time when the politics of race and feminism are confusingly in flux. (Beyonce's upcoming tour is called "The Mrs. Carter Show"; her upcoming HBO special promises to take viewers into a private life whose carefully tweaked conventions appear to be carefully and constantly considered for public consumption.) When artists take on the burden of being role models, adapting themselves to an ideal, the pressure for them to be authentic increases a million-fold. In public, at least, they're living an abstraction, a fantasy the culture craves and requires. One scratch in its surface, revealing fragility, can undermine the whole project.

That's why people cared so much when Beyonce sang to a track at the inauguration, and why her only route to redemption was to come back with an a cappella "Star-Spangled Banner" whose worth could not be disputed. And that's why her very individual Super Bowl triumph, which put her blatantly front and center even when she was sharing the stage with her former "girls," felt to many like something bigger than just a superexpensive bit of flash. Like the brand new ad for tickets to "The Mrs. Carter Show," presenting Beyonce as a corseted monarch ruling her domain with a hip sway, Sunday's display of imperial charisma comes off as a historical inevitability, and as something that benefits us all. It's an illusion, but what a substantial one.