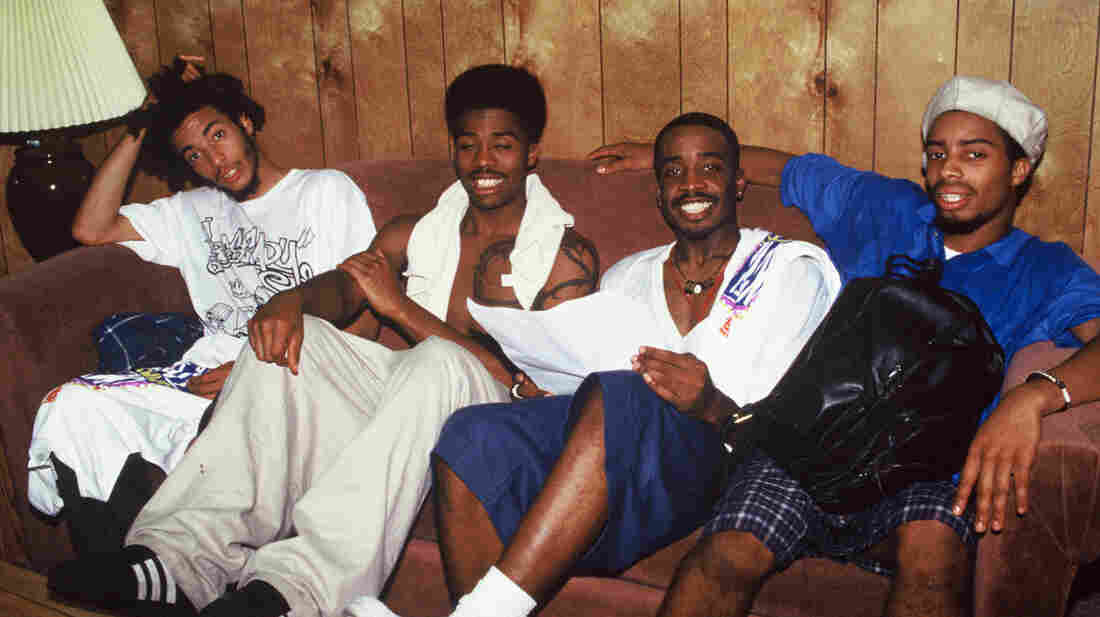 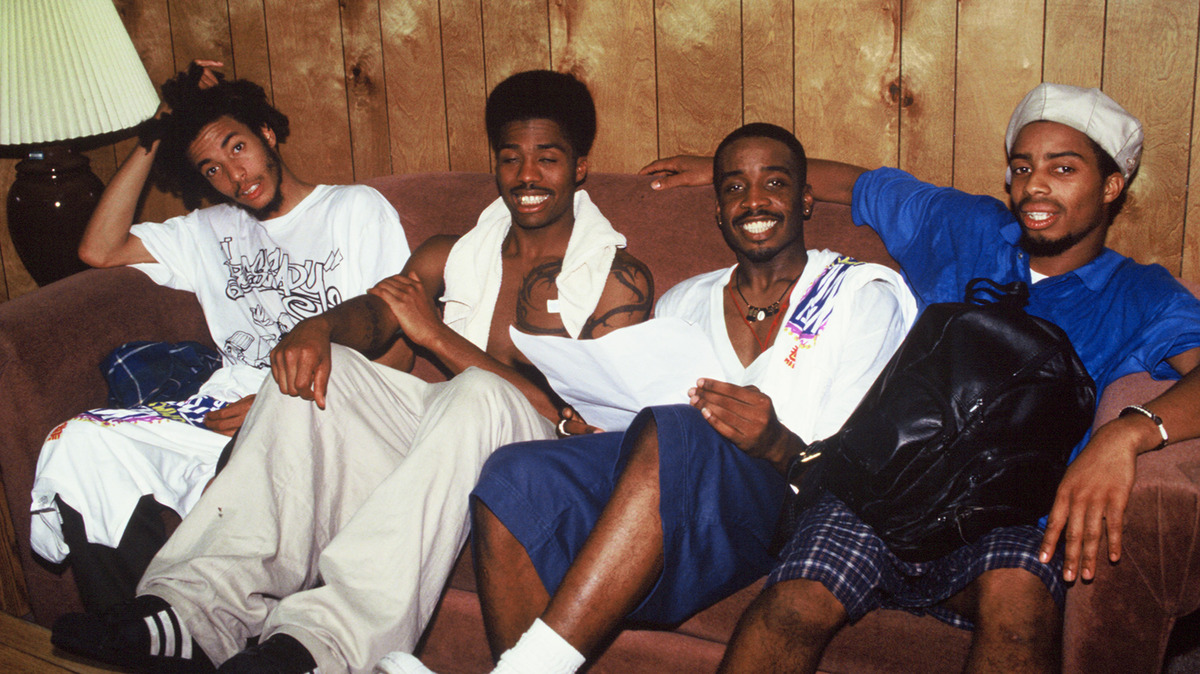 Two decades and two months ago, an unruly, exuberant quartet of rappers from South Central Los Angeles called The Pharcyde loosed their debut album upon the world.

Bizarre Ride II The Pharcyde delivered what it promised and remains one of rap's rarities: a complete artistic statement. From a dozen songs and four skits emerged a concept album of shaped chaos. You could call it a portrait, if portraits reached out with eight arms, grabbed you by the collar and blew weed smoke in your eyes. The four members of the group — Derrick "Fatlip" Stewart, Tre "SlimKid3" Hardson, Emandu "Imani" Wilcox and Romye Robinson — combined the tag-team emceeing of the Cold Crush Brothers with sophisticated sophomorics over the soul-jazz stomp of tracks banged out by producer John "J Sw!ft" Martinez. During a time when L.A. hip-hop was defined and dominated by gangster rap, The Pharcyde was Southern California's answer to New York's Native Tongues movement: colorful, facetious, fun, and utterly authentic. They packaged themselves almost like a novelty group: Their first single and video, "Ya Mama," showed the group in baggy garb engaging in a rhymed game of the dozens. But they could turn surprisingly dark and pensive, as they did with their next two singles, "Passin' Me By" and "Otha Fish." Bizarre Ride may have indeed been the last great album of hip-hop's Golden Era — a time of great diversity of expression — as it was followed one month later by the release of Dr. Dre's solo debut. The commercial colossus of The Chronic easily eclipsed the offbeat alternative.

Alas, The Pharcyde assured their own obscurity, and their mayhem ultimately proved more curse than blessing. They argued with J Sw!ft, jettisoning their musical motor. And despite their discovery of a new beatmaker of transcendent skill — James "Jay Dee" Yancey, the man who would become J Dilla — their second and final album, Labcabincalifornia, was marked by conflict (including a fistfight, according to Dilla, resulting from a heated debate on the relative merits of two digital samplers). Labcabin was followed by the departure of the group's most charismatic personality, Fatlip. Next to quit was the multitalented Tre, leaving Imani and Romye as the two remaining members. Meanwhile, J Sw!ft's promising production career went from eccentric to pathetic. He blew the money from a six-figure deal with Tommy Boy Records on weed and other diversions. Crack addiction took him from a mansion in the Hollywood Hills to a more modest abode: a tree on Ivar Avenue.

Though the group was reunited briefly for a series of concerts in 2008 by impresario Chang Weisberg in his Rock The Bells summer hip-hop festival, personal rifts between the members remained too raw for a real reconciliation, even with the prospect of a prosperous 20th Anniversary tour. Unable to find footing as solo recording artists, Fatlip and Tre found themselves cut off from the use of their legacy brand to promote their performances, as Romye and Imani secured and maintained the right to perform exclusively as The Pharcyde.

"Fatlip and Tre were the Lennon and McCartney of The Pharcyde," says Mike Ross, who signed the group to his Delicious Vinyl label in 1992. Ross makes no secret about his sympathies, calling Romye and Imani's performances "horrible," "second rate" and "insulting to the legacy."

Ross determined to back the disenfranchised members — and capitalize on the opportunity of the milestone year — by funding a new tour with a reconstituted group called The Bizarre Ride: Fatlip and Tre joined by the classic album's two producers, a rehabilitated J Sw!ft and "L.A." Jay Barnes, along with lyrical support from associate K-Natural. Upon the 20th anniversary of the classic album, sentimental fans are now faced with two simultaneous tours from which to choose.

In New York show last week at the Greenwich Village venue SOB's, The Bizarre Ride led a packed nightclub through their entire first album. They barreled happily through the original sequence of skits and songs, 40-something rappers recalling all the energy of their 20-something selves — and looking significantly more clear-eyed than they did in those early days. The opening bars of "Officer" provoked a hilarious Temptations-style dance routine, and the L.A. rappers found an ironic welcome in the neighborhood where, in 1992, they once caught a vicious beat-down at the now-defunct Wetlands. "I always wanted to do this," Fatlip began, feeling free, "Is The Bronx in the house?!" After Bizarre Ride's final song, the group encored with a sequence of Dilla's three best tracks from Labcabincalifornia, J Sw!ft bobbing his head, exiled no more.

"It's important for me and them to preserve the Pharcyde legacy ... to preserve what that era was about," says Ross, referring to the rap ethos of the early '90s — originality, virtuosity, authenticity. "We're doing a much better job than what those guys [Imani and Romye] are doing." The Bizarre Ride tour with Fatlip and Tre has moved on to Europe, where they'll be doing nearly a dozen shows. Ross reveals plans for a Bizarre Ride record and perhaps a musical based on the Bizarre Ride album, which he still owns.

Meanwhile, The Pharcyde featuring Imani and Romye are playing tonight (Wednesday) in Los Angeles and on February 17 in Las Vegas. And they're not taking kindly to the competition. "They've got lawyers already pushing back on us," says Ross.

With the current and former members touring in two hostile camps, The Pharcyde's continuing legacy guarantees an odd future, no matter whose 'cyde you're on.

Dan Charnas is the author of The Big Payback: The History of the Business of Hip-Hop (New American Library/Penguin) and serves as Big Payback Officer for ooVoo. A veteran of the hip-hop business, in 1999 Charnas helped sign The Pharcyde's Tre Hardson to his first solo deal at Forest Whitaker's Spirit Dance Entertainment, a venture with Sony Music.