Accessibility links
In A Diverse World, Grammy Sticks To Its Values : The Record The nominees may seem to reflect our era of infinite playlists, but where the Grammys are concerned, some surprisingly traditional ideas still endure. 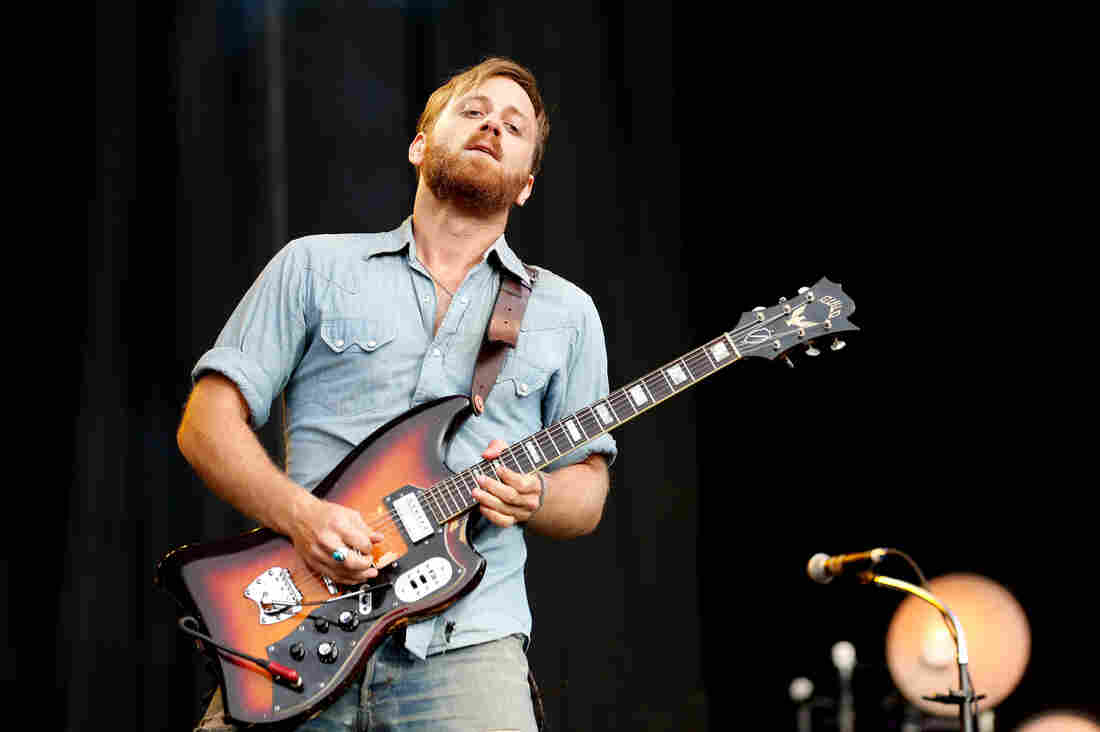 Dan Auerbach of The Black Keys performs in England last August. Along with five nominations for his band, Auerbach is nominated for Producer of the Year, Non-Classical division. Simone Joyner/Getty Images hide caption 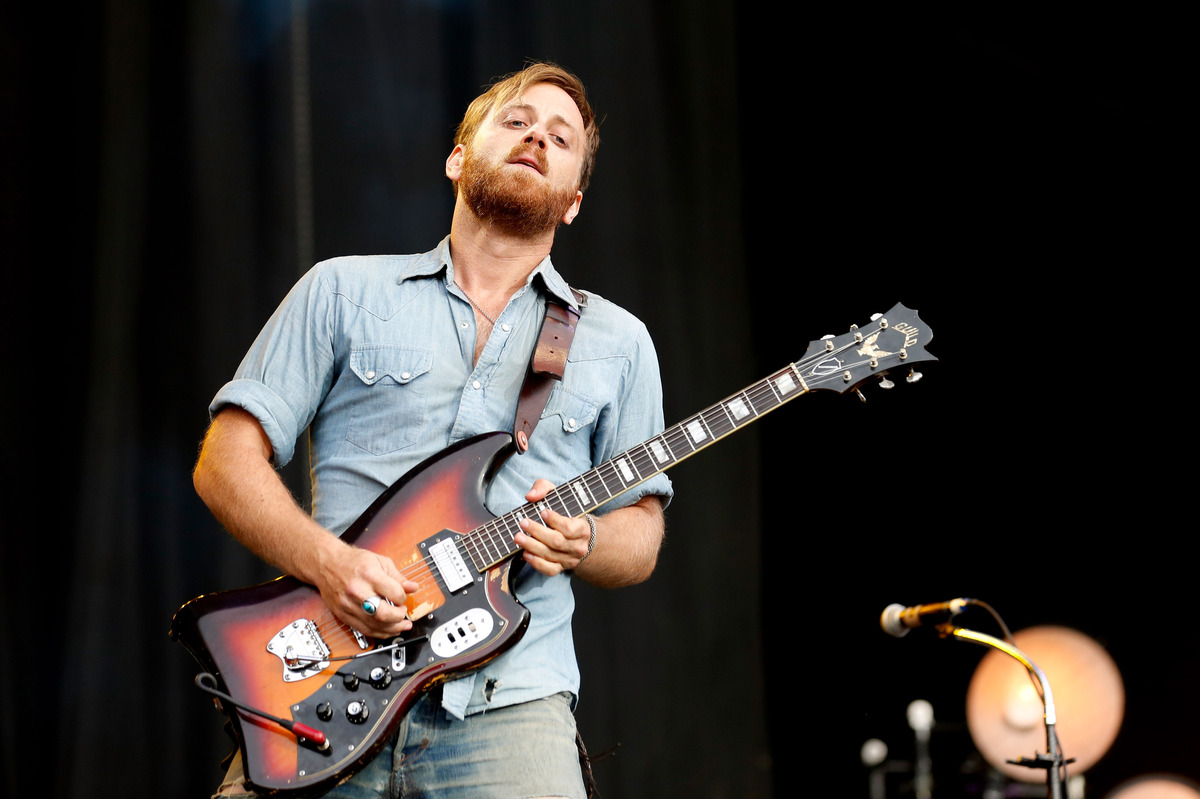 Dan Auerbach of The Black Keys performs in England last August. Along with five nominations for his band, Auerbach is nominated for Producer of the Year, Non-Classical division.

If you took one song each from the artists likely to walk away with Grammy awards on Sunday night, you'd have a pretty decent playlist. Start with the Big Six, up for six awards each: Kanye West and Jay-Z, The Black Keys, fun., Frank Ocean and Mumford and Sons. Add in Taylor Swift, who could very well claim Record of the Year for her foray into Avril Lavigne's territory, "We Are Never Ever Getting Back Together," and Kelly Clarkson, who might edge her out with "Stronger (What Doesn't Kill You)," the anthem that encapsulates everything she does best. For fun, throw on "Call Me Maybe" — it's up for Song of the Year — alongside Ed Sheeran's "The A Team," the most recent hit in the bunch. Round out your jams with "Hold On" by the Alabama Shakes, who might give Ocean trouble in the Best New Artist category. Or, what the heck, The Lumineers, heading toward No. 1 with that catchy "Ho Hey."

Who are you, if you like this playlist? You may very well fancy yourself open-minded, an all-around pop fan. But you're not a club kid — because where's the EDM? Neither are you a tween girl angry that Justin Bieber got overlooked, or a hip-hop head more interested in downloading in the DatPiff mixtape charts than in industry awards. You don't play country music in your truck as you drive around Baton Rouge. You don't live in a universe run by genre-crossing divas like Rihanna (yes, nominated, but not for a top category) and Beyonce. Who are you? You might not know it, but you're a classic rocker.

Grammy Rules: Why Al Walser Got A Nomination And Justin Bieber Didn't

In pop now, the value system best embodied in classic rock (and its sibling, soul) doesn't just connect to a sound or an era. It stands for music that's artistically aspirational but still smelling of the street; for singles that emerge from coherent albums; for an artisanal feel, whether it comes from strummed guitars or bookish hip-hop samples; for that old bugbear, authenticity. It favors maturity over callow youth and seriousness over sheer pleasure. It's SERIOUS.

This year's Grammy nominations tell the story of an industry striving for a new sense of coherence based in those old values. The fierce loyalties that once defined "quality" pop music — in the grunge 1990s, for example, when Kurt Cobain sang of indie rock as "our little tribe" and got into a fistfight with improper rocker W. Axl Rose — have almost entirely faded. Instead, there's the economic flux created by corporate consolidation on the one hand and indie fragmentation on the other, complemented by self-conscious boundary-crossing by both musicians and fans. Indie rock hero Bon Iver covers Bonnie Raitt; Dawn Richard, friend of Diddy, looks to Peter Gabriel for inspiration. Girl Talk mashes it all up, and the kids dance.

Yet this bold eclecticism still excludes plenty, and in doing so, re-creates a value system that first took hold in the late 1960s among lovers of album-oriented rock. Music made primarily for dancing remains suspect, even though it dominated pop in the half-century leading up to the classic rock era. It has remained definitive, feeding a lineage that leads from funk to disco to New Wave to rave and techno and EDM. But still, the only dance-oriented producer nominated for the Producer of the Year Grammy is Diplo. His connections to multi-culti indie, via his old collaborators M.I.A. and Santigold, can't be questioned. Anyway, Dan Auerbach of The Black Keys will probably win that little gramophone.

Country music also remains anathema, not only because it's regional but because it still mostly runs on huge hit singles, often novelty songs about boats, beer or horses. Like jazz or Latin music, country at the Grammys is relegated to the lower substrata; its adherents are expected to honor each other in their own separate-but-equal awards shows.

And though some bubblegum still proves just too sweet to resist, it's nearly always excused as a guilty pleasure. This is true beyond the Grammys. Just this week, the indie artist Grimes deleted her Tumblr account after Pitchfork picked up a post she wrote defending her own year-end best-of list, which includes songs by Bieber and Carly Rae Jepsen and Psy's "Gangnam Style" (She's since reactivated the account, but not the old posts). It was unclear whether she simply felt violated by Pitchfork's attentions, or concerned about a wider readership questioning her love of these hits. But the latter seems more likely, since she wrote the post partly in reply to the "serious 'music guys' who ... laugh when I say I like Mariah Carey."

The "serious 'music guys' " and girls sure love Frank Ocean, though. (So do I, it should be noted.) The nonrock musicians who are in the top tier of Grammy nominees — Ocean, Jay and 'Ye, the five-time nominated Miguel — still play pretty much by rock's rules. They've made "statement albums" that reward contemplative listening. Live, they're able to deliver without anyone thinking they're lip-synching. They push the boundaries of whatever style in which they work, but honor their forebears with strong nods toward the rock and soul canon. Is it a coincidence that they're all male? Some women, like Adele, work within this general formula. But it's also true that many women, from collaboration-oriented Rihanna to comic Nicki Minaj to Taylor Swift, who almost counts as legit but is still perceived by many as too girly/personal.

As should be expected from members of a trade organization like the National Academy of Recording Arts and Sciences, Grammy voters also honor stars who have either proven reliable and adaptable — Dave Grohl is a prime example — or newcomers who promise to endure beyond one trend or hit. Better yet, be a good old-fashioned rocker who can also play by the new rules. The Black Keys may be one of the most-licensed acts in pop, but those Nissan and Victoria's Secret ads are OK because the band doesn't shy away from recording in "a cinder-block building in Alabama" when it feels like keeping things real. The enduring appeal of rock as both a standard-bearer for "quality pop" and a concert-industry moneymaker, especially as artists age, makes its value system not just a worthy one to uphold, but also a profitable one.

I don't mean to deride the ideals classic rock put forward so long ago. Honing your craft, working to develop a vision, and really learning how to play an instrument or vocalize expertly are all valuable pursuits for the working musician. Four of this year's Grammy Big Six (fun., Ocean, Jay and 'Ye) have made appearances on my own year-end lists. I'm looking forward to rooting for them on Grammy night.

It's worth noting, though, that as we settle into pop's new era of infinite playlists and viral hits, some surprisingly traditional ideas endure about what's worthwhile and what will last. Is that a bad thing? Not necessarily. But it's a sign that the music industry, at least, is most comfortable with a future that retains a strong flavor of the past.