Accessibility links
High School Marching Bands Lay Down The Beat Of Mardi Gras : The Record Students at New Orleans' McDonogh 35 — New Orleans' first African-American school, which now attracts kids from all over the city — march up to six miles a night to usher in the Carnival season. 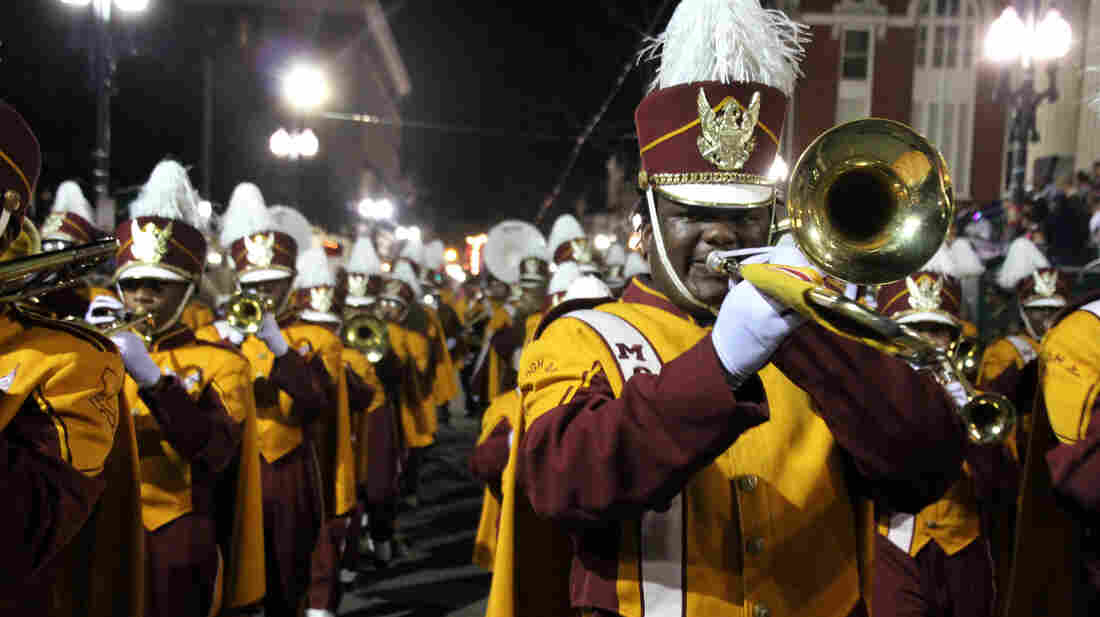 The McDonogh 35 High School band marches in a parade to usher in the Carnival Season. Keith O'Brien for NPR hide caption 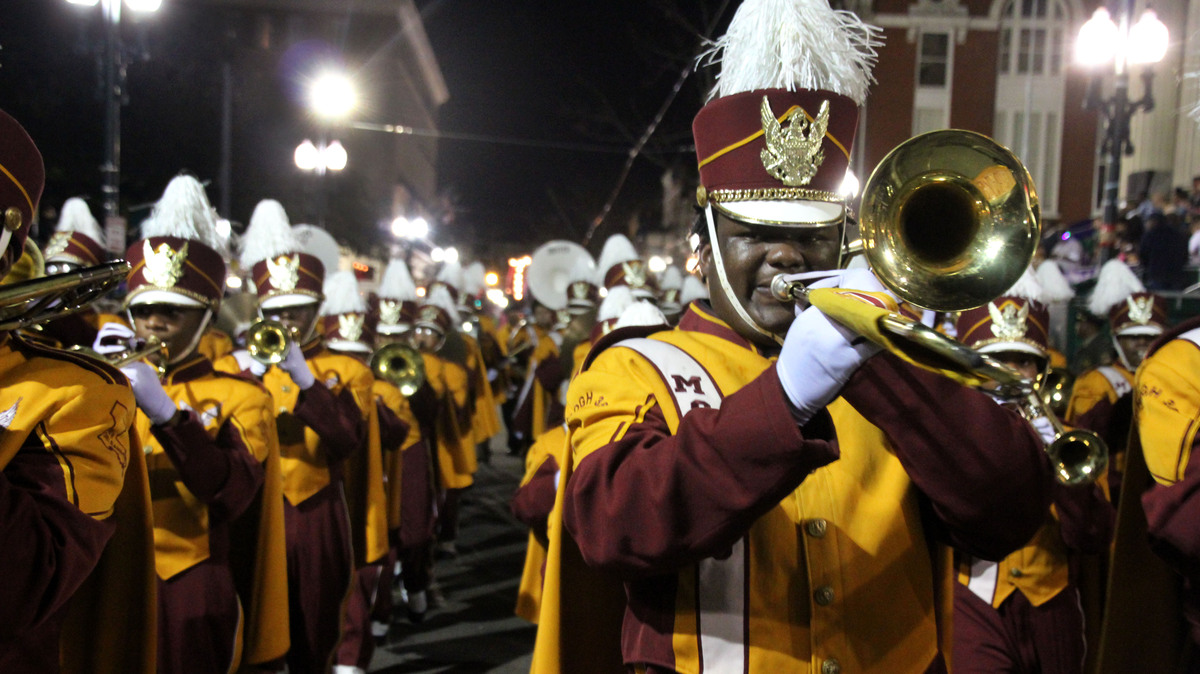 The McDonogh 35 High School band marches in a parade to usher in the Carnival Season.

In less than an hour, the McDonogh 35 High School marching band — including the flag girls, the dance team, the majorettes, the color guard and the actual band — needs to be on the parade route five miles away. It's the peak of Carnival season in New Orleans, and high school marching bands form the backbeat of Mardi Gras.

But some kids can't find their uniforms. In the parking lot outside, the color guard is all out of sync. And while the teachers dart from one crisis to the next, handing out peanut butter and jelly sandwiches to fortify the band for the night, the kids — all 81 of them — struggle to find their rhythm.

It feels like it will take a miracle to leave the band room on time, but this is what they look forward to all year. They'll spend three hours marching four miles before some of the largest crowds that any musician, of any age, will ever see. And the kids will tell you: They live for that moment when they hit St. Charles Avenue, New Orleans' most majestic thoroughfare.

Dray is a veteran of Mardi Gras parades. He marched in his first one as a 12-year-old.

"I was definitely nervous. The first time, it's always nerve-wracking," he says. "But once you get out there more and more, you get used to it."

But shaking the nerves is only the half of it. High school marching bands in New Orleans march night after night during Carnival — the equivalent of running a 5K every night, rain or shine, with a sousaphone on your back — and still show up for school in the morning.

"Your first parade is like your wakeup call. Like if you're not in shape, you're going to find out that night," Dray says.

"The worst thing that ever happened out there to me was the time I dropped my drumstick," Bell says. "And I was still marching. I was trying to tell somebody, 'Hey, get my drumstick. Get my drumstick.'"

It was gone, and Bell kept marching with one drumstick. At McDonogh 35, that's just what you do. The school, named for a 19th-century shipping magnate who donated a fortune to improve the education of poor students, was the first African-American high school in New Orleans. Today, students come from all over the city.

"They say all of our kids nowadays can't get along. That's not true," he says. "Marching band in Mardi Gras, you see a whole unit. You see a unit from the front to the back. From the flags to the dancers, to the band, the majorettes — everybody's doing something together."

And so, for kids like Bell, band isn't just something to do after school five days a week.

"Being in the band is like being in a family. It really is," says Bell. "You're brothers and sisters. You're close. I mean, it's changed my life in a big way. I used to be shy. I didn't really talk much. But once I got in the band, I started opening up to people."

And people — during Mardi Gras anyway — certainly open up to Bell and all of the other members of the marching band.

McDonogh 35 marched its four miles. The kids got home after 10 o'clock and then got ready to do it all over again. They'll be back out there every night until Fat Tuesday, laying down the beat of Mardi Gras.