Accessibility links
Mumford & Sons Take Home Album Of The Year Grammy : The Record Call it diversity or a lack of consensus, but no single act dominated this year's awards. Instead, the Grammys spread the love, though rock bands — including The Black Keys and fun. — fared well. 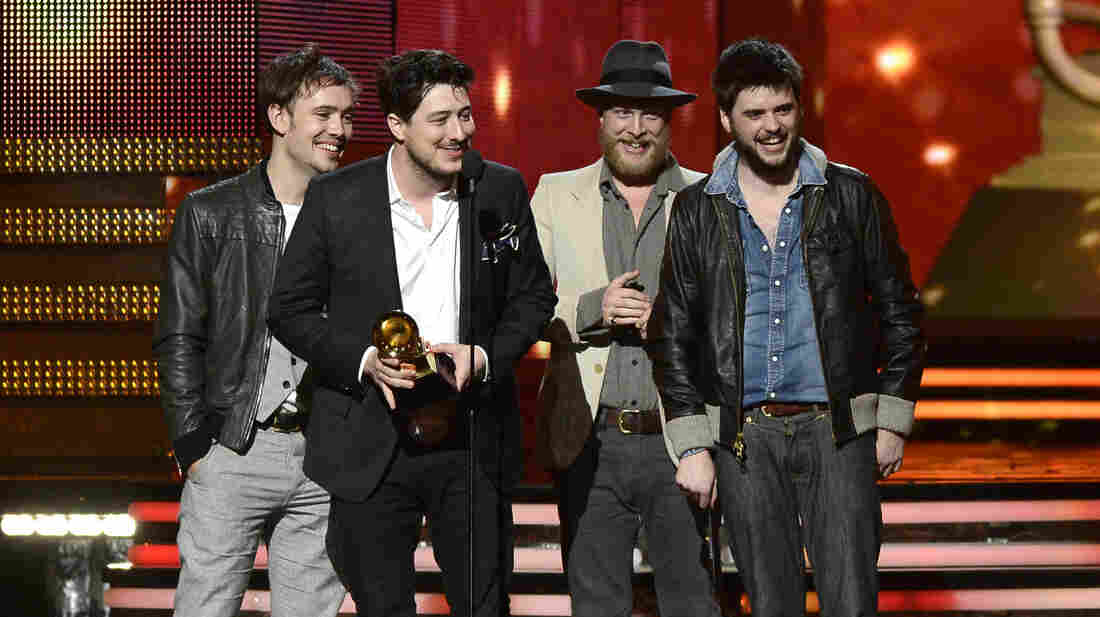 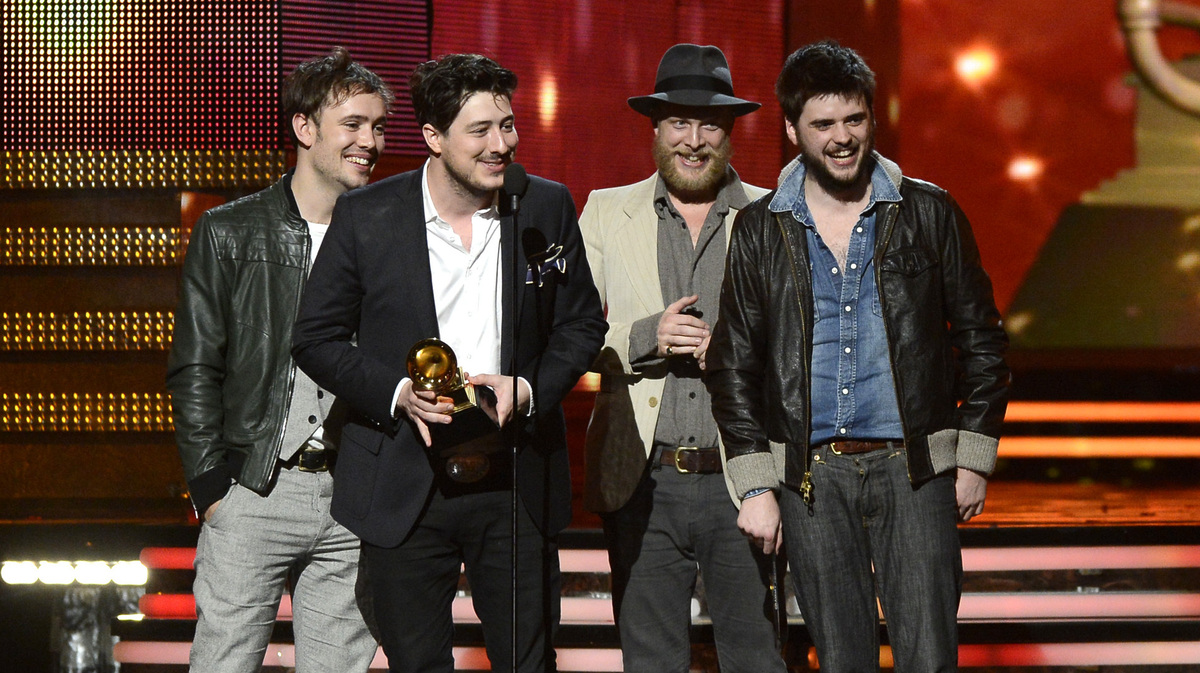 Mumford & Sons (from left: Ben Lovett, Marcus Mumford, Ted Dwane and Winston Marshall) accept the award for album of the year at the Grammy Awards on Sunday night.

Listen to Mandalit del Barco's radio report from the Grammys at the audio link.

The folk-rock quartet Mumford & Sons won album of the year for Babel and The Black Keys dominated the rock category at the 55th Grammy Awards on Sunday night. In a ceremony that ricocheted between appreciations for iconic musicians and performances by celebrated but not-yet-proven acts, the winners reflected both the diversity of pop music in 2012 and the lack of consensus about the music that defined the year.

Rock bands dominated the big awards — not all of them inspired by early 20th century blues or folk traditions. Gotye and fun., two groups that would sound at home on best-of-the-'80s compilations, each won multiple awards.

Unlike last year, when Adele's six wins, including the trophies for album, song and record of the year, felt like a foregone conclusion, this year's Grammy presentation had no obvious storyline. Before Sunday night, a number of scenarios were conceivable: Would fun. be the first act in 34 years to win all four major categories (record, song, album of the year and best new artist)? Would the three enormous singles of the summer (fun.'s "We Are Young," Carly Rae Jepsen's "Call Me Maybe" and Gotye's "Somebody That I Used to Know") divvy up the major categories? Would they split the vote and give The Black Keys an opening to dominate the night? Would the night be a coronation for critical favorite Frank Ocean?

For a moment, just after the show began, it looked like the scenario the Grammys wished would play out was a rerun of last year's show. Adele won the first award of the evening, beating Kelly Clarkson, Jepsen, Katy Perry and Rihanna to win best pop solo performance for a live recording of the song "Set Fire to the Rain." (Bet on her Live at the Royal Albert Hall album to do brisk business in the coming week.)

It was a telling start to the show, as if the Academy were acknowledging that this year's nominees did not contain a singular, dominant force. Indeed, after giving Adele her curtain call, the Grammys gave us a little bit of everything. Fun. picked up awards for best new artist and song of the year, for "We Are Young." Gotye won record of the year and best pop duo/group performance for "Somebody That I Used to Know," featuring Kimbra, and best alternative music album for Making Mirrors. (Pity poor Carly Rae, a loser in both categories in which she was nominated.)

The Black Keys and Frank Ocean were shut out of the major categories, but each performed and picked up multiple awards elsewhere. The Keys won best rock performance, best rock song and best rock album, and Dan Auerbach, the group's guitarist and singer, also won producer of the year, nonclassical division.

Ocean may have had the most to gain from the awards. An intensely private musician who won over critics with his sweeping, sometimes distant album Channel Orange, he was up for album and record of the year, as well as best new artist. He won none of them but picked up an award for best urban contemporary album as well as best rap/sung collaboration for "No Church in the Wild" by Jay-Z & Kanye West.

Ocean also performed a slightly shaky rendition of his song "Forrest Gump" late in the broadcast, wearing a yellow suit and standing behind a piano on which a video of the bottom half of his body running down a road played. It was jarring, partly because it felt so much less rehearsed than the rest of the show, but also because it was one of the few times in the evening when a single person stood on the stage and performed.

There were far more performances than awards handed out, and the stage often felt like a pop merry-go-round, where one performance bled into another. Taylor Swift opened the show with a carnival-inspired performance of "We Are Never Ever Getting Back Together" that never really came together.

Rock bands were mostly allowed to take the stage on their own — Jack White, fun. and Mumford & Sons each got solo time in the spotlight.

By the end of the night, Mumford & Sons' win for album of the year felt like a surprise. The group had lost four earlier awards, mostly in the rock and Americana categories. But if we were looking for narratives, the Mumfords should have been at the top of the list. Two years ago, the group played on the Grammys alongside The Avett Brothers in support of Bob Dylan, and the performance boosted the group's debut, Sigh No More, to the No. 2 spot on the Billboard 200 album chart. Babel, released last fall just in time to qualify for this year's awards (albums and songs had to have been released between Oct. 1, 2011, and Sept. 30, 2012, to be eligible this year), was the best-selling rock album of 2012.

In the genre categories, there were a few clear favorites. Kanye West and Jay-Z won three of the four rap awards, for songs from their 2011 collaboration Watch the Throne. Skrillex won all three of the awards for electronic and dance music. Chick Corea and Esperanza Spalding each won multiple awards in the jazz categories.

There was also a dose of swinging, lounge-worthy soul from the night's biggest winner who wasn't up for any awards: Justin Timberlake sang two songs from his forthcoming album, The 20/20 Experience. Timberlake is a born performer, and the assembled stars seemed to let out a sigh of relief at his presence — finally, someone everyone could agree on was onstage.

Timberlake just announced his return to music, but the Grammys wasted no time in embracing him — he appeared later, alongside National Academy of Recording Arts & Sciences president Neil Portnow and Ryan Seacrest, to help introduce the In Memoriam segment of the show. But the music industry isn't alone in backing Timberlake: One of those new songs, "Suit & Tie," appeared in several commercials during the rest of the broadcast. A singer who can get the crowd on its feet and win the endorsement of corporate America? Look out for him next year.