Accessibility links
David Bowie, Rock's Shape Shifter, Returns : The Record After 10 years out of the public eye, the new album from Bowie, The Next Day, proves he's still a compelling pop star in today's music world. 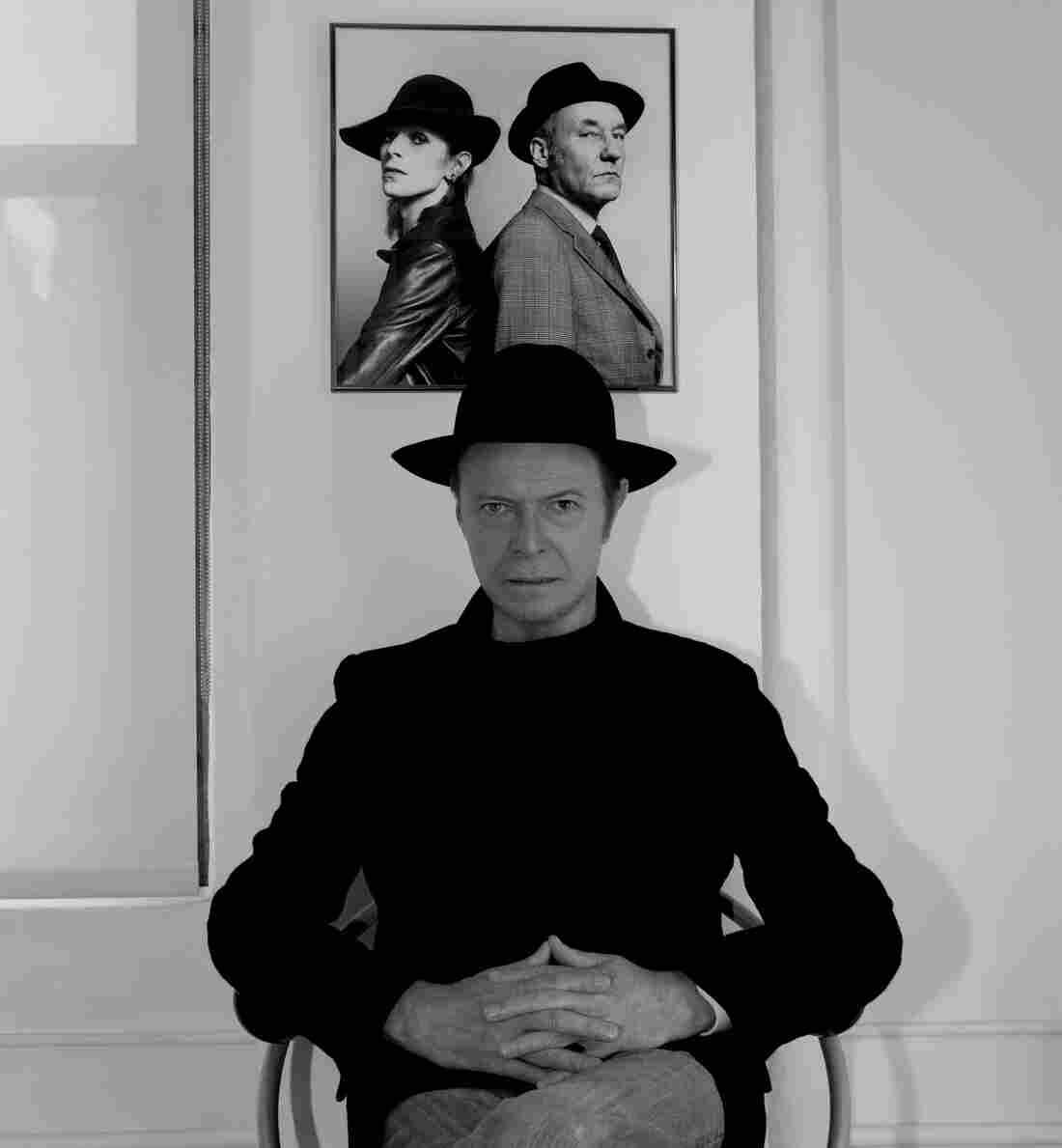 David Bowie's album, The Next Day, will come out on March 12. Jimmy King/Courtesy of the artist hide caption 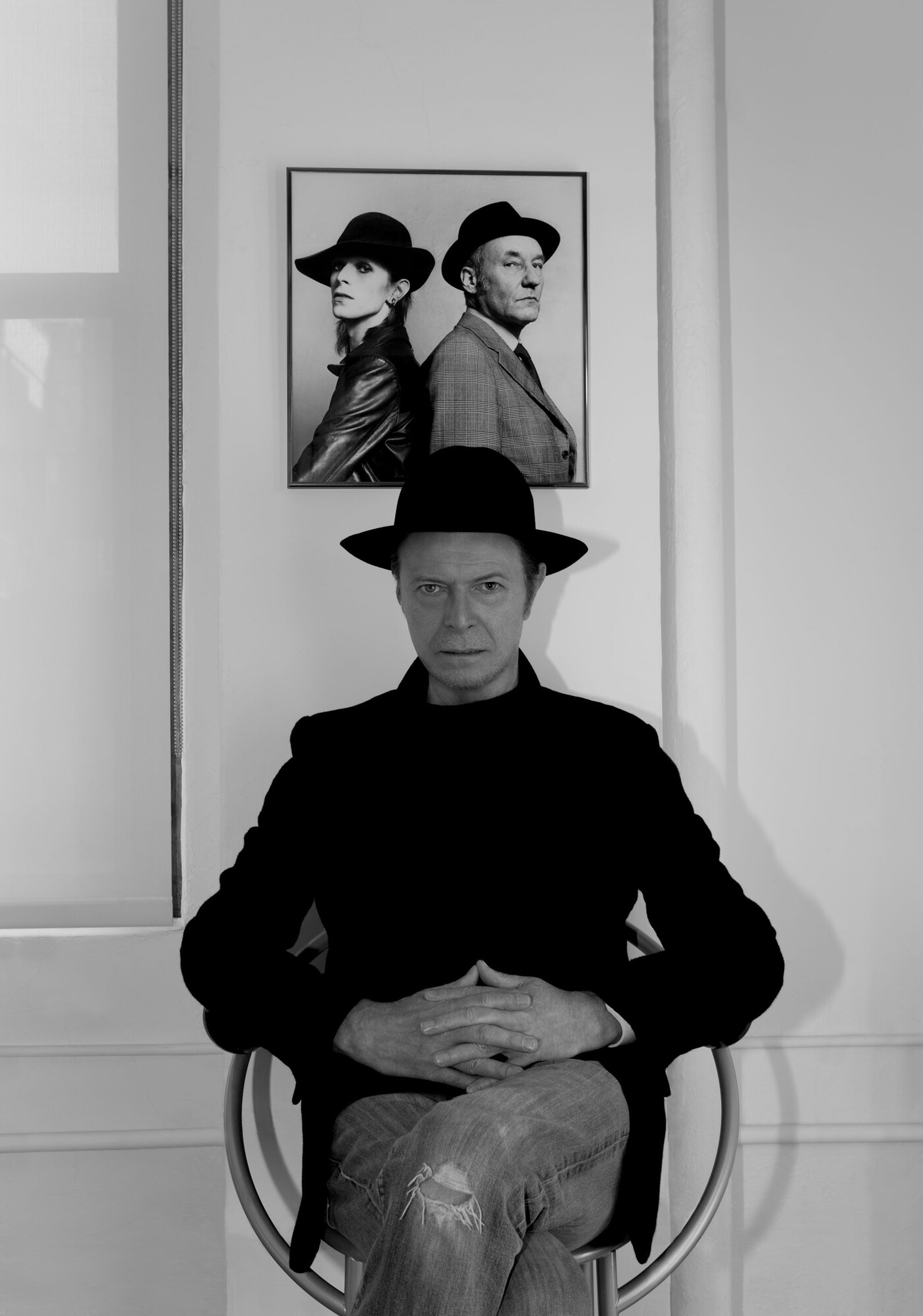 David Bowie's album, The Next Day, will come out on March 12.

Hear Ann Powers talk about David Bowie's career, and his new album, with Morning Edition's Renee Montagne by clicking the audio link above.

My musical world does not exist without David Bowie's influence. This is certainly hyperbole; and yet when I think of the past 10 years, during which Bowie did not make music, I think of so many things I've loved that ride on an undercurrent he created. Lady Gaga and Kanye West; Adam Lambert on American Idol; late-era U2 and early Radiohead; M.I.A. and TV on the Radio and Janelle Monae and Frank Ocean — everybody took a little something from the trick bag of the Goblin King. So Bowie was with us even when he wasn't. And now, despite nasty rumors of persistent heart problems or worse, we know that David Bowie is not rapidly dying or strung out in heavens high — he walks among us, right there on iTunes, where his 24th studio album, The Next Day, is now streaming. 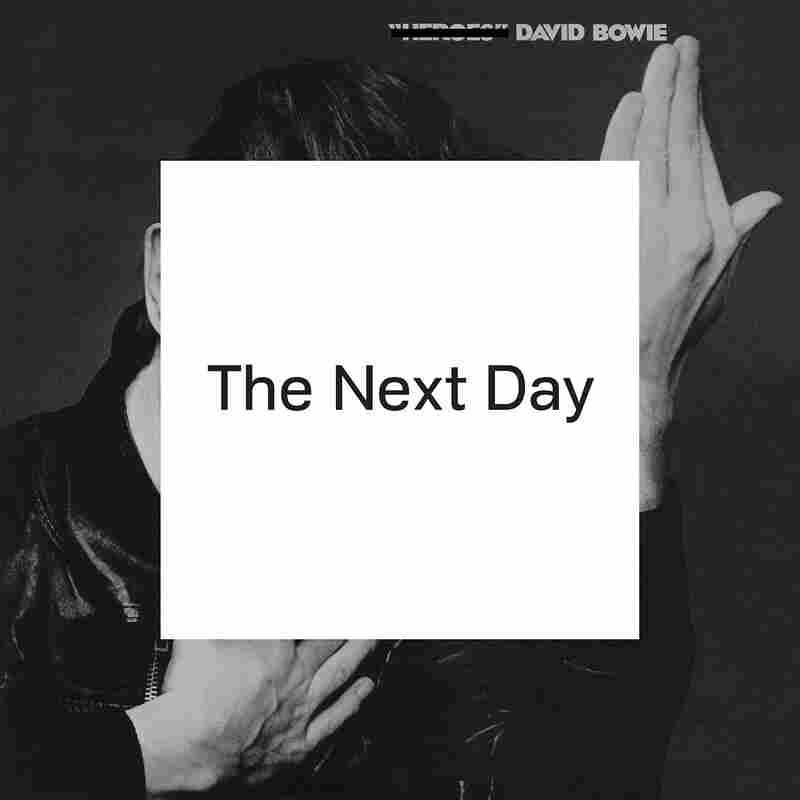 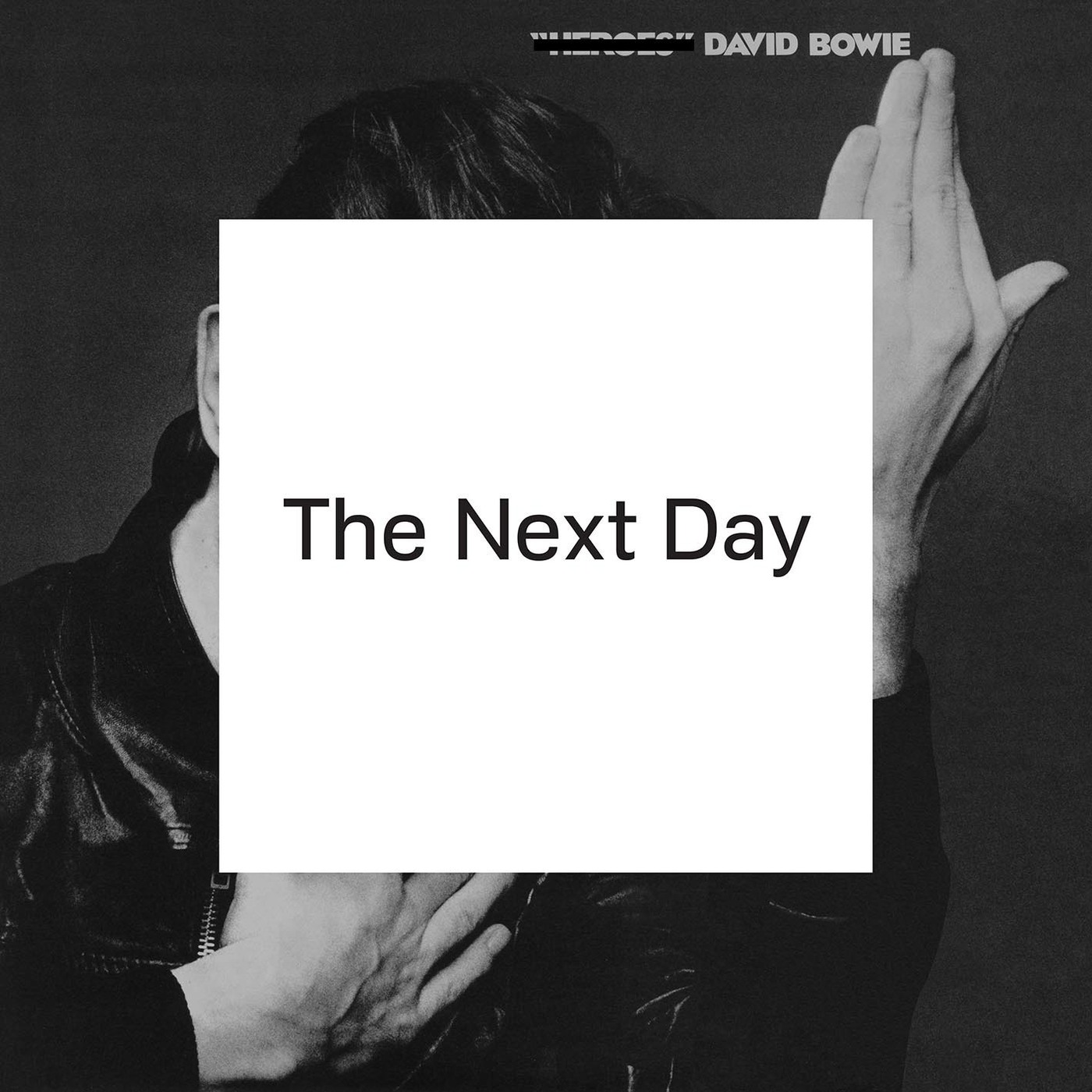 During his retreat, Bowie was just doing what serious artists sometimes have the luxury and discipline to do — gathering material and letting it gestate, waiting for the right moment to re-emerge. Bowie is obsessed with timing: it's a major theme in his work, from the five years he imagined Ziggy Stardust having on Earth to the signal line from his Berlin Trilogy — we can be heroes, just for one day. It must have been almost a game for him to lay back and let this coherent though not uniformly conceptual album take shape, and then take stock of his environment, waiting for the perfect moment to release it: dead of winter, when we're all a little itchy, when the air is cold and often clear enough to carry forward complicated messages.

The Next Day is not an easy album to absorb, though it's an endlessly enjoyable listen, especially for fans eager to tease out its hidden meanings. The lyrics offer clues and plenty of red herrings. Some songs have a strong autobiographical tinge, while others read like chapters in the middle of a book you've stumbled across in a curiosity shop. The two tracks most people have heard fall on the personal side of Bowie's cosmology. "Where Are We Now" is an elegiac ballad that connects his own nostalgia for Berlin with reflections on that city's refugee dislocations, while "The Stars (Are Out Tonight)," with its wonderful Todd-Haynes-on-acid video (directed by Floria Sigismondi), is about fame, one of the Thin White Duke's lifelong obsessions.

Beyond these intimate excursions, however, Bowie wanders wide, into medieval history, spy-movie scenarios, tales of exile and paranoia and men and women selling out their worlds. The album's lighter moments — there's a dance song and a love song, and one wham-bam rocker celebrating the musical pretenders to Bowie's throne — still tease the brain with obscure references and narrative left turns. The music is similarly eclectic, and feels free, with Bowie's long-trusted collaborators (guitarist Earl Slick, sax player Steve Elson, the rhythm section of Gail Ann Dorsey and Sterling Campbell) slyly connecting each riff and rhythmic shift to earlier points in his career, without fetishizing any one period. The skillful juxtapositions of elements from his many musical guises -- Big Beat Bowie, Melodramatic Ballad Bowie, No Wave Bowie, Pop Magpie Bowie and even the Weary Elder Bowie who emerged on the very fine 2003 album Reality — satisfies the hungry ear without privileging any one costume in the actor's closet.

That overflowing closet, and the very fact that it's so full, makes The Next Day more than just a nostalgic exercise. Instead of re-creating any one moment his fans may wish they could revisit, Bowie, producer Tony Visconti and the many experienced Bowie pals playing on The Next Day judiciously sample from one of rock's richest discographies to shape songs that feel immediate. Bowie changes his vocal style throughout the album, putting on different familiar voices and encouraging the musicians to follow him into corners of his sound that they haven't visited in a while. (I hear "Cat People" here, you might hear "Look Back in Anger" there; we'll all have fun chasing the figures that emerge in this memory-mist.) The music doesn't sound dated because it's always moving, and also because Bowie's sonic innovations still inspire so many younger artists, from second-generation New Wavers like Pulp and Blur to the kids currently playing with the glam glitter crayon box, like fun. and Foxygen.

More important than his musical influence, however, is the startlingly fresh currency of Bowie's primary obsession: make-believe. I use that childish term in its most serious sense, representing the central human activity of self-creation through speech and act, disguise and daydreams and lies. People often speak of Bowie as a chameleon, a master of artifice, but that's just his surface; so much of his work is actually about artifice.

His greatest hits have made vivid the processes of art-making and star-making. They've considered how rock music deified his friends and threatened his own sense of self. They've confronted the power of desire to shatter sexual self-conception, confound or reinforce racial stereotypes. They've tackled big themes like the impact of technology and the limits of nationalism within stories of radical displacement and alienation, often with a supernatural tinge. Bowie himself has certainly adopted many guises throughout his career, but his own transformations are only part of his larger project: exposing the constructed nature of our most treasured, "true" experiences, whether that's love, religion, national pride or even the solidity of the self.

In past decades, these interests have made Bowie relevant to students of philosophical systems like post-modernism. Today, constructedness is more clearly part of everyone's life. The online world obviously runs on it, as we build our avatars and live through so many virtual realities. That was Bowie's subject on Reality; on The Next Day, he's exploring more widely, touching on how the stories we tell ourselves collectively create tyrants and motivate wars, and confronting what happens when someone is thrown out of her own life story through exile, criminal activity, mental illness or spiritual doubt.

That's what I hear, anyway, in the knotty lyrics of The Next Day, brought to life in music that moves in many different directions at once. Fundamental to Bowie's belief in the power of artifice is his refusal to believe in a primary source for rock 'n' roll itself; unlike many classic rockers, from The Rolling Stones to Neil Young, he's not invested in an ideal of the blues or any other form of roots music. When Bowie mines older musical forms, they're the shiniest, sometimes the schlockiest and often most pop, from sentimental balladry to 1950s novelty songs to the Shadows' "Apache," the instrumental twangfest that every reviewer's noting as a source on The Next Day. As I hear it, Bowie never settles on an origin point for what he does, and that has allowed him to go through his changes without ever coming off as insincere. Now, as a graying eminence, he's building labyrinths, and it's our delight to enter them and recognize how closely they correspond to the (questionably) real world.

If The Next Day is inspired by anything beyond Bowie's own deep mine of a catalog, I like to imagine that it's the music of women rockers like PJ Harvey (who also considered war on 2011's amazing Let England Shake), St. Vincent, and Merrill Garbus of tUnE-yArDs. Women in rock have always struggled to prove their own authenticity; these artists have found their own truths by exploring different roles, donning masks, experimenting with odd sounds and song shapes. They are Bowie's other daughters, his musical ones; maybe he has learned something from them, too. However he's arrived in the comfortable state of profundity represented on The Next Day, it's our luck he's letting us in. Where is David Bowie now? As usual, the answer to that question is always changing. But as long as there's him, as long as there's us, we'll be interested.