Accessibility links
When Punk Met Funk, Deep In The Heart Of Texas : The Record The most fun strain of punk music came out of Austin, courtesy of the Big Boys. And though the band broke up in 1984, its legacy lives on in 2013.

When Punk Met Funk, Deep In The Heart Of Texas

When Punk Met Funk, Deep In The Heart Of Texas 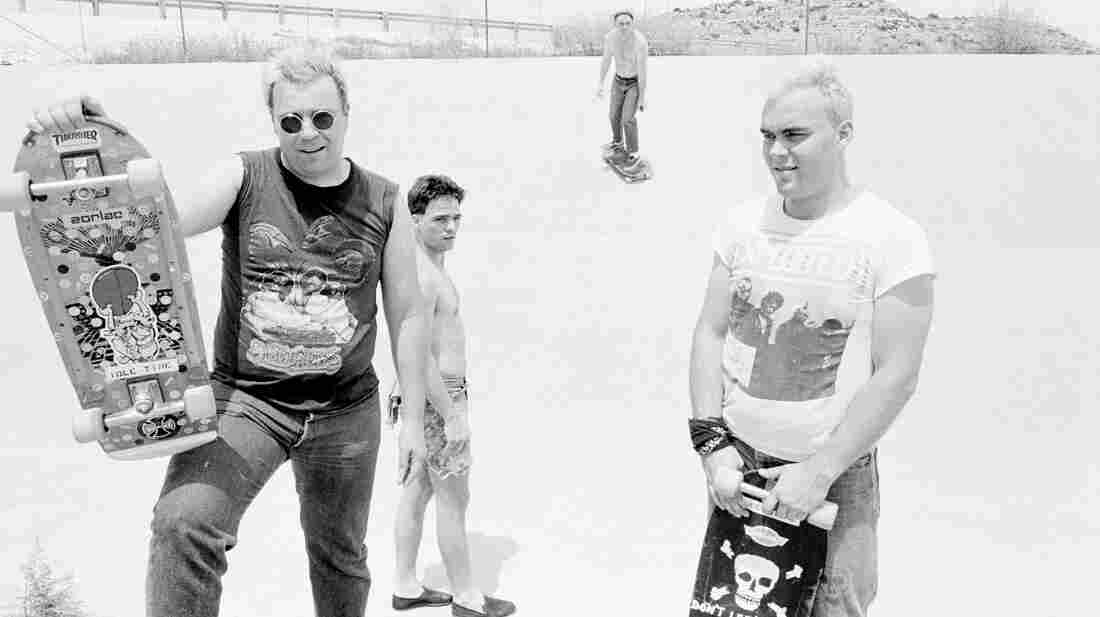 Big Boys in West Texas on the way to California in 1982. Randy "Biscuit" Turner is at the left, Chris Gates at the right, and Tim Kerr at the back. Bill Daniel/Courtesy of Light in the Attic Records hide caption

toggle caption
Bill Daniel/Courtesy of Light in the Attic Records 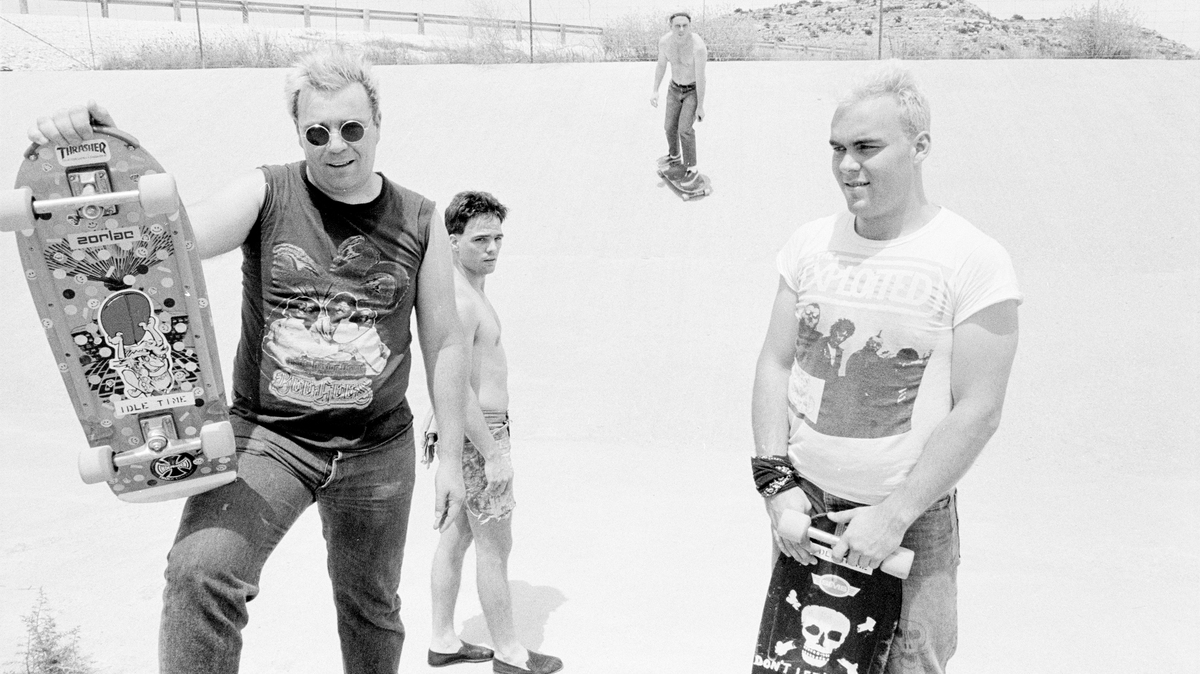 Big Boys in West Texas on the way to California in 1982. Randy "Biscuit" Turner is at the left, Chris Gates at the right, and Tim Kerr at the back.

Bill Daniel/Courtesy of Light in the Attic Records

"To be a punk means freedom." So said singer-guitarist Mark Perro of Brooklyn rock band The Men. His band came up in the local hardcore punk scene, but had recently started adding pedal steel and harmonica to their songs when he gave me that definition. For him, punk is not a genre of music, but a state of mind: In the wake of the Sex Pistols, regional punk scenes sprang up literally overnight in the U.S., each city hosting emancipated teens making their own mutant strain on three chords and a sneer. There was Black Flag, the Germs and X in Los Angeles; the Dead Kennedys in San Francisco; Husker Du and the Replacements in Minneapolis; and Bad Brains and Minor Threat in Washington, D.C. Noise and velocity defined most of these bands' sound, generating a furious music danced to primarily in spasms and pogos.

Yet the funkiest and most fun strain of punk music in the U.S. resided deep in the heart of Texas, courtesy of the Big Boys. The band broke up in 1984, but its legacy lives on in 2013. Last week the Seattle-based Light in the Attic record label lovingly reissued the Big Boys' ridiculously rare first album from 1981 — Industry Standard/ Where's My Towel on vinyl, complete with silk-screened cover, photocopied inserts, sticker and more. And next month 540 Records will reissue the Big Boys' 1982 EP Fun, Fun, Fun on vinyl. That title now names Austin's annual music and comedy festival, Fun Fun Fun Fest, while skater-punk acts like Wavves, Harlem and FIDLAR take their cues from the Boys.

"They really inspired me and define everything that is DIY in my book," Timmy Hefner, an Austinite who runs 540 Records and the music festival Chaos in Tejas, told me. "It's one of the best Texas punk records ever and a record that totally changed my life when I was a young kid."

Though Austin is known more for its brand of outlaw country music and putting its musical talent in psych wards (see Roky Erickson), the city's underground punk scene was a fertile one at the dawn of Reaganomics, with bands like the Dicks, D.R.I. and Butthole Surfers popping up behind the Big Boys. The Big Boys — comprised of guitarist Tim Kerr, bassist Chris Gates, a handful of drummers and the outsized personality of frontman Randy "Biscuit" Turner — smashed the template for hardcore machismo that defined most scenes by being funky, irreverent, skate-obsessed and openly gay.

Listening back to the twenty-five minutes of Where's My Towel/ Industry Standard, I'm struck by how the Big Boys wedded their love for funk, R&B, disco and soul to the speed and abruptness of punk. Opener "Security" is spasmodic yet it's also spry, finding plenty of wiggle room in 53 seconds. Rather than the furious and forced bass and drum rhythms that propelled so much of punk rock, the band favored heavier syncopation from Kerr's chopped James Brown riffs and Gates' nimble bass. On "Spit," they shout: "Watch your feet/ You look at us/ And you might miss the beat." Live, they would cover Cameo, Kool and the Gang and Rick James. Their last album, 1984's No Matter How Long the Line Is At the Cafeteria, There's Always a Seat! featured turntable scratching, a sound rarely heard outside of early hip-hop. (Though yes, they also fathered funk metal.)

Big Boys shows were notoriously fun, and most touring punk bands found themselves under the band's spell. Thumb through live pics of the band and you'll see the husky Biscuit in drag, or else in shredded skate clothes. Sometimes dressed as a Daisy Dukes-wearing cowboy or in a wig and pink polyester. A Mexican wrestler or a mummy. Much like his bandmate Kerr, Biscuit had a career as a visual artist post-Big Boys (until his untimely death from untreated Hepatitis C in 2005), and during the band's heyday, he was the visual focus of the band. When D.C.'s Minor Threat toured Austin, frontman Ian MacKaye was astonished their antics, as he recalled in the liner notes to the early '90s CD reissues of the Big Boys' discography: "Enormous men, decorated jump suits, a horn section, 200 friends onstage singing and dancing ... The next year we came back to Austin and did it right — we opened for the Big Boys."

Similarly intimidated was D.C.'s legendary hardcore punk band, Bad Brains, whose members, when they found out Biscuit was gay, responded with vitriol that shook much of the underground DIY culture in the early '80s and was dissected via fanzines after. According to guitarist Kerr, who housed the band when they were playing in Austin and recounted the incident on his blog: "When they were headed out the door HR [Bad Brains' singer] handed Beth a thick sealed envelope addressed to Biscuit. ... There was a multi-paged letter/sermon/rant that ended with '...may you burn in hell, the Bad Brains.'"

It's the type of malice that must have been all too common for a queer kid coming from small town Texas, a kid who found solace and acceptance in punk rock. Thankfully, Biscuit's example paved the way for openly gay singers like Adam Lambert as well as Beth Ditto of The Gossip. Issues of self and self-reliance crop up often on Industry Standard, and when Biscuit shouts out the refrain to "Identity Crisis," it's with the sort of fury most punk rockers reserved for the establishment. In the music of the Big Boys, punk's dance party of personal freedom can still be heard.