Accessibility links
Gangsta Rap Swap Meet Proprietor Wan Joon Kim Has Died : The Record Kim sold some of the earliest work of DJ Quik, Dr. Dre and Eazy-E in the mid-1980s, when few knew them and fewer stores would sell their music. 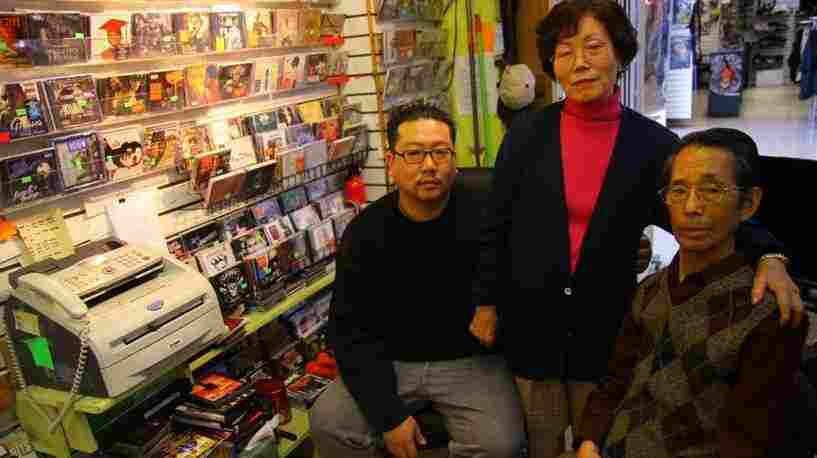 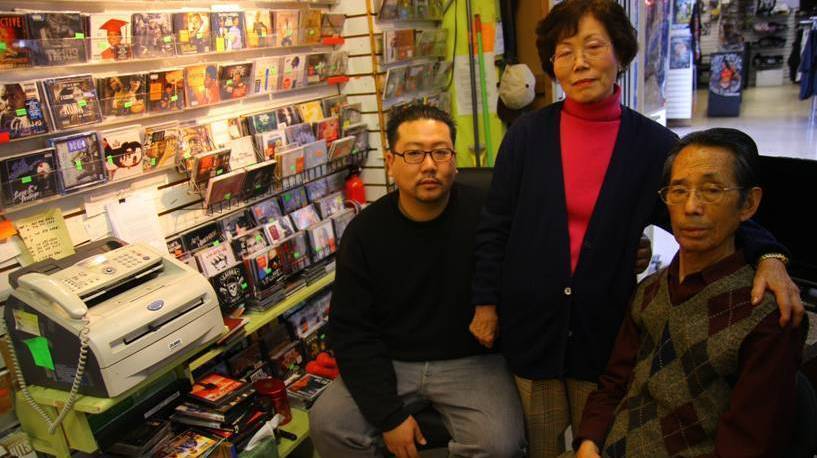 Wan Joon Kim (right), with his son Kirk and wife, Boo Ja, at their stall inside the Compton Swap Meet last January.

In the history of Los Angeles hip-hop, many names loom large: Dr. Dre, Ice Cube, DJ Quik. But there's another, lesser-known name that nevertheless played a big role in the early years of L.A. rap. Wan Joon Kim opened a swap meet stall in the now-famous suburb of Compton in the mid-1980s. He sold some of the earliest work of those stars at a time when few knew them and fewer stores would sell their music. Many never forgot him. Kim died Wednesday at the age of 79.

Wan Joon Kim didn't intend to become the godfather of gangsta rap; in the beginning, his son Kirk says, he just wanted to support his family. Kim escaped North Korea on a fishing boat, and the family eventually wound up in the U.S. in 1976. Kirk Kim says at first his parents sold a random assortment of stuff at swap meets to make ends meet. Then: "Somebody was selling hip-hop CDs at one of these swap meets. My dad saw an opportunity. He saw these big lines in front of there, and he said, 'I'm gonna try this.' "

The Kims rented a stall in Compton's first indoor swap meet. The nascent artists they carried included Ice Cube and singles Eazy-E put out on his fledgling label. Those two would go on to become part of N.W.A., a legendary group whose Straight Outta Compton album put Compton — and gangsta rap — on the global map.

Cycadelic Music Corner became a pilgrimage for anyone wanting the latest in gangsta rap. Because Wan Joon Kim and his wife, Boo Ja, had a close relationship with local musicians, they often got the hottest music first. Kirk Kim says his dad didn't always understand the language of the rhymes, so Kirk's sisters would translate.

"He'd always ask them, 'What are these guys talking about? Why are these guys so angry?' And they would pretty much interpret certain songs, and it catches to him and he'd be, 'Oh, I like this.' "

He understood the emotion, if not the words. Over the past few years, despite the rise of digital music, fans have continued to travel to Compton to visit the Kims, whom many called Pops and Mama. Kirk Kim says his mother treated customers like they were her own children — including critiquing their style.

"Some of these people come back with their own kids, and they always ask 'How's your mom? You know, she used to always make me pull up my pants.' "

Wan Joon Kim died after a three-year battle with cancer. But the quiet man's legacy lives on in the many friendships he formed and the hometown music he helped make famous.