Accessibility links
Lessons From SXSW 2013: Take The Middle Road : The Record Big names and Next Big Things dominate coverage of Austin's festival, but there's quality music between the two poles. Ann Powers says the skill and subtlety those acts bring to the party interest her more than the sure bet of a legend or the sugar high of watching a baby band with buzz. 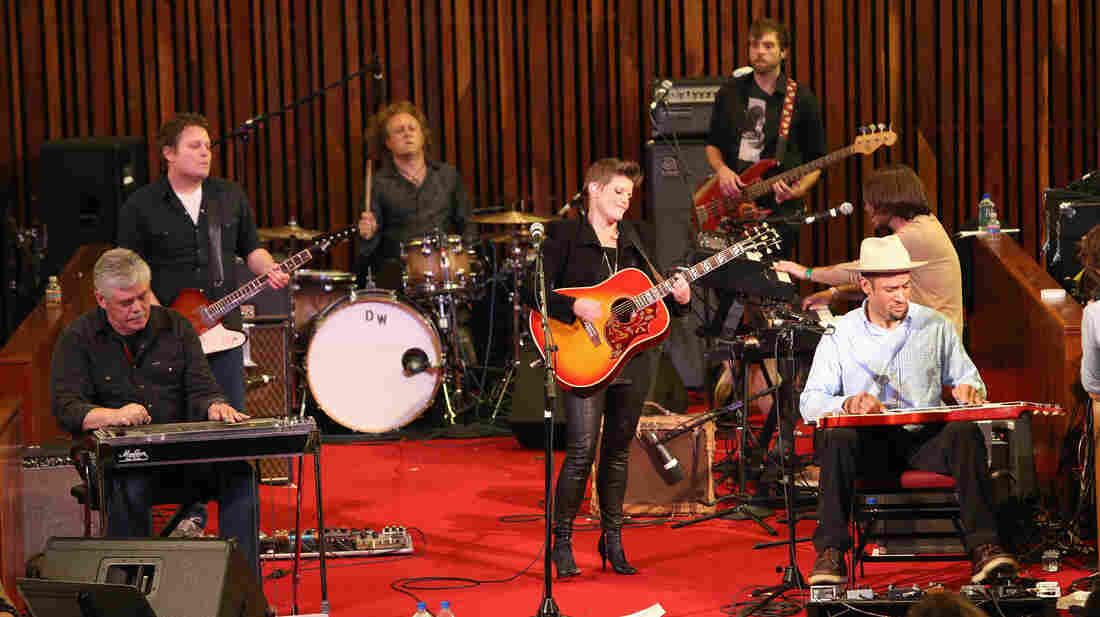 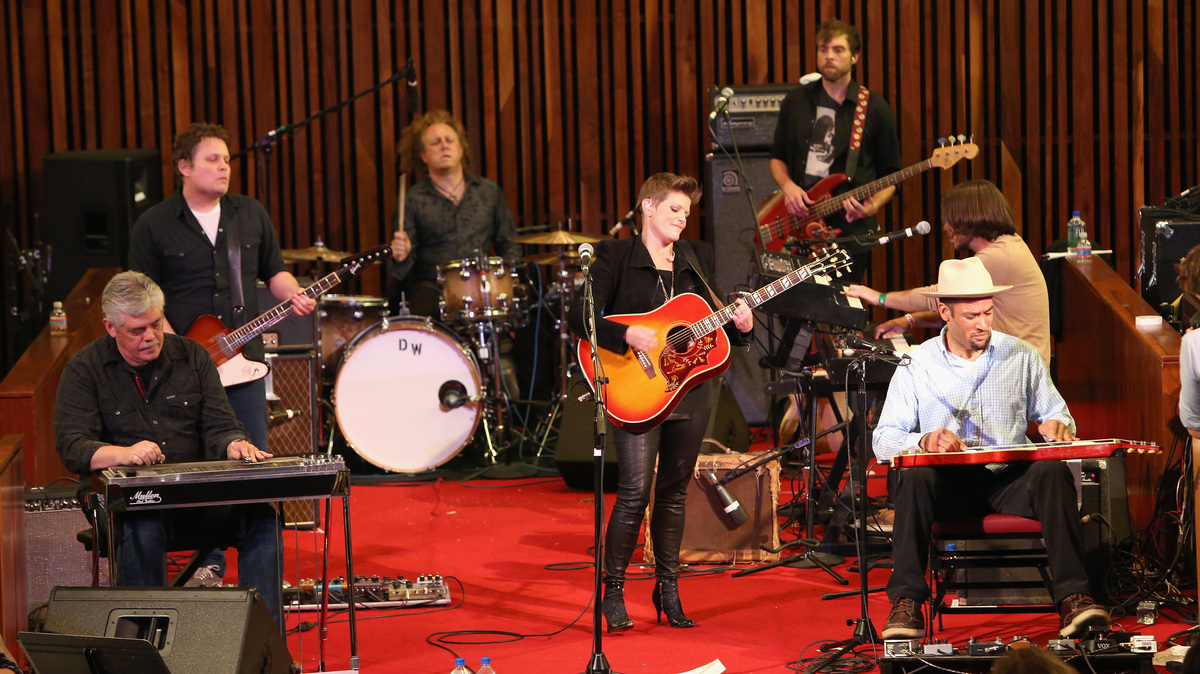 That guy Prince has a sense of humor. His closing night show at the year's South By Southwest music conference and festival was advertised with the hashtag #thenextbigthing — as if the Purple One hadn't long ago established himself as the Dickensian Big Thing of festivals past, present and future. Besides, there's no phrase more derided in Austin than the one pointing toward some new band ready to change lives, revive the music industry, or at least raise enough interest to make Twitter crash for a couple of minutes. When upwards of a thousand artists are playing over the course of five days, it's pure hubris (on the part of both hopefuls and trend-spotters) to think any one might make a really serious splash.

These days the Next Big Thing is often warmed-over toast by the time anyone beyond Austin notices. Some fledgling artists do get a little bump in popularity from their grueling schedule of day parties, official showcases and hours busking for dinner money on South Congress or the hellishly crowded Sixth Street. But there's too much noise and it's hard to really hear anything; we're always rushing to another venue, behaving like a bunch of mice clicking on hyperlinks in cyberspace rather than people who could pause and lend an ear, and think for a minute.

Fans do slow down for the big names who play the festival, waiting in line for hours to gain entry to what seems like a once-in-a-lifetime show. But these stunts smack of condescension. Prince, Justin Timberlake, Usher, Green Day and the other megastars who descended upon the secret-show circuit this year are basically slumming. Playing to smaller-than-usual crowds at an event still tied (however loosely) to the concept of "indie" music, these deities prove they can still be spontaneous and touchable, if only by the select few willing to abandon all other entertainment options and wait in line.

None of this is news and, let's be honest, neither is it relevant. Music lovers from all walks of life still flock to South By Southwest to check out shows, network and (despite all the bitching) have some fun. And in between chasing young buzz and fighting for VIP list space, we often find ourselves inhabiting a pleasurable middle ground. What happens there doesn't make for screaming headlines, but it's real music-making that offers quieter revelations.

Let's call this the realm of rediscovery. Within it, artists who've been around for a while try out new approaches or have fun rearranging their familiar material so that audiences can appreciate it anew. The din of South by Southwest can distract from such particular pleasures, but in a strange way, it also makes them possible. Artists can try something unexpected a little bit out of the spotlight; they can make mistakes, get close enough to show their humanity, and renew bonds with the listeners who've supported them all along.

Though I thrilled to new sounds from Luella and the Sun and loved every minute basking in the glory that is Stevie Nicks, most of my memorable South by Southwest moments took place in that zone of rediscovery. Three were particularly memorable, and very different, illustrating the different ways musicians keep going, no matter what the buzz says. The players who made these moments were all highly skilled and experienced; the subtlety they bring to the party interests me more than the sugar high that comes from watching a baby band strive to live up to a rapidly snowballing reputation. Humility was the other quality they shared; at these shows, music, not image or hype, came first.

The artist whose performance triggered my thoughts about rediscovery also fits within the superstar category, though she's been flying under fame's radar for almost a decade. Natalie Maines, the central voice of the platinum-selling country trio the Dixie Chicks, played two shows at South by Southwest, presenting new material from her solo debut, Mother, to be released May 7. But Maines didn't approach these shows as if they were special gifts bequeathed by a royal. Instead, she came across as a working musician finding inspiration at a new edge, and inviting listeners to join her there.

That Maines is now cultivating a rock sound instead of the Chicks' harmony-based country twang won't be a shock to anyone who's kept track of her since she famously spoke out against President George W. Bush a decade ago. Since then, she's remained mostly out of the spotlight, raising her kids with the actor Adrian Pasdar and befriending rockers like Eddie Vedder and Mother's co-producer, Ben Harper. At the second of her two Austin shows, Friday night at the Central Presbyterian Church, Maines looked ultra-modern in a pompadour haircut and all black clothes. What mattered more was the confidence she found within a new band led by Harper in a set that included covers of songs by Vedder, The Jayhawks, Dan Wilson and others, as well as a couple of catchy originals.

Although the closing guitar duel between Harper on lap steel and Maines's father Lloyd on pedal steel was fun, the set's crowning moment came when she dared to try a version of the late Jeff Buckley's "Lover, You Should Have Come Over." That sweeping ballad's technical difficulty is enhanced by the challenge of living up to Buckley's vocal, which hit otherworldly heights. Fully committing herself, Maines scaled the song's tricky melody like a free mountain climber, hitting notes that seemed to defy any scale. Immersed in the music, unconcerned about whether she was living up to anyone's definition of success, Maines presented us with the privilege of witnessing her own internal process of rediscovery.

Another encounter in the same church showed me how new contexts can redefine an artist. I'd gone there Tuesday night to catch the reliably top-notch Chicago singer Kelly Hogan and only stayed for Ryan Bingham because I hadn't seen him perform for a few years. Bingham is a Southern-leaning rocker who won an Academy Award for "The Weary Kind," the theme song from the Jeff Bridges film Crazy Heart. His most recent album, the independently released Tomorrowland, is startlingly raw and political. I expected an solid set from the L.A.-based troubadour, but I got something far more emotionally intense.

The hint of something different first surfaced in a conversation I had with the guy sitting next to me. A West Point graduate stationed near Austin at Fort Hood, he'd become a Bingham loyalist after the artist publicly honored one of his fellow soldiers, who'd been killed in Afghanistan. As he told me the story of Bingham taking care to invite the lost fighter's family to a concert, I stole a glance around and noticed many other similarly tattooed, beefy, cargo shorts-clad young men — maybe not soldiers, but definitely not the average South by Southwest hipster crowd.

Once Bingham emerged in a ten-gallon hat and started singing, accompanied only by himself on acoustic guitar, those young men went wild. A few ran up to the church altar and started dancing, swinging each other around and jumping for joy. Three songs in, the whole crowd was shouting out Bingham's trenchant lyrics — which surprised me, since my snap judgment marked these fans as sartorially conservative, at the very least, and Bingham's songs veer toward the left. Hearing them performed Woody Guthrie-style in front of such a devoted group really helped me grasp the power of his newer songs, which had struck me as sometimes overly dramatic on record. I realized that Bingham wasn't manufacturing urgency in his music; he was rising to meet the needs of a fan base ready and waiting for catharsis.

A few nights later, the happy dancers who put me in the mood for rediscovery were already pretty high (on life, at least) by the time I joined them. These revelers had squeezed into the tiny Flamingo Cantina, a Sixth street bar know for "good vibes," to boogie down to funk and reggae. I caught the last couple of numbers from the great Bernie Worrell and his "orchestra," but the night's main attraction was The Skatalites, a group unlikely to win the title of Next Big Thing — because it's been around in various forms for nearly half a century.

This version of the pioneering ska band includes only two original members: the 77-year-old alto saxophonist Lester Sterling and Doreen Shaffer, who's occasionally sung with the group since 1963. These elders were strikingly youthful in attitude, their spirits amplified by the enthusiasm of the young musicians supporting them.

"Music is my occupation!" Sterling announced at the start of the mostly instrumental set, and he proved an ideal advertisement for ska's happy rhythms as a health benefit. Singing "My Boy Lollipop" — one of pop's bubbliest love songs — Shaffer, too, came across as hopeful and luminescent as a girl going on her first big date.

The Skatalites sound was once the primary engine in a major musical trend; from it came ska and later the reggae that would sweep the world through the songs of Bob Marley. Now it's classic, played and appreciated by devotees who appreciate it in a space that arises out of time. Standing strong next to Sterling, many of the younger men who complete the group's stellar horn and rhythm sections grew up on this sound; it's life, plain and simple, to them. To walk into their circle was to forget any worries about chasing the next big thing. Pleasure, I remembered, enters the body through the feet and the hips, not so much through the overactive cool-hunting brain. And music is a renewable resource, always ready to be newly rediscovered.