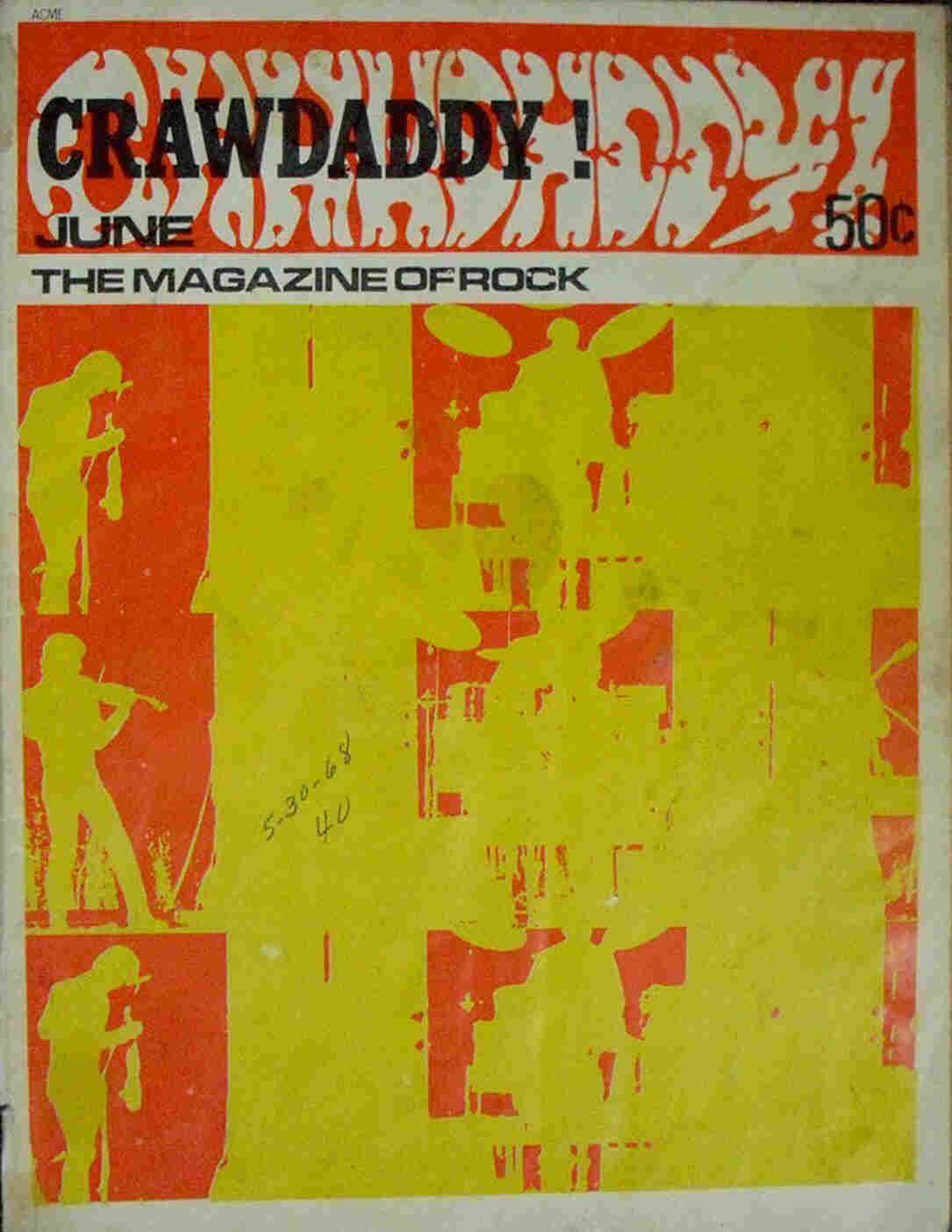 Issue 16 of the original run of Crawdaddy!, from June 1968. simonm1965/flickr hide caption

A year and a half before Jann Wenner founded Rolling Stone, a teenager named Paul Williams started Crawdaddy! magazine. Launched in January 1966 by the precocious 17-year-old Swarthmore college student, Crawdaddy! was the first American music magazine to take "rock" music seriously. This was the era of Teen Beat and Tiger Beat, when pop stars were more likely to be asked about their favorite color rather than what inspired their creativity. Writer/editor Paul Williams, who died on Wednesday at the age of 64, changed all that by asking burgeoning legends like Brian Wilson and David Crosby what they were really thinking about. Amazingly, Williams (still totally unknown at that point) was able to invite himself into recording studios for impromptu and candid conversations with The Beach Boys and Crosby, Stills & Nash during an era that predated the personal manager, the publicist and the bodyguard.

Originally, Crawdaddy! was solely written, edited and published by Williams in his dorm room, but within 18 months it grew into a real venture with an office and staff in New York City which provided music journalists Peter Guralnick, Jon Landau and Richard Meltzer with their first writing outlet. Arguably, Williams's success (but not his talent) peaked early. By 1969, he achieved legendary status by accompanying LSD guru Timothy Leary to John Lennon and Yoko Ono's hotel room in Montreal, where he participated in the recording of the seminal anti-war chant "Give Peace a Chance". Check out the video of that moment and you'll clearly see Williams right in front of camera (with long stringy hair, glasses and a greenish sweater) singing and clapping along with the likes of comedian Tommy Smothers.

Sometime in the mid-1990s, I met up with Williams when we were both in Germany, he on a book-tour and myself as a traveling musician. We converged at a café in Koln and I grabbed the chance to interview him in detail (with a local journalist in tow). Paul candidly and humbly described his adventures. I declared him "The Godfather of Rock Criticism."

By the end of the 1960s, Williams had sold Crawdaddy! (which traded hands several times before folding in 1979). He dropped out of the music scene and spent much of the of the '70s and '80s exploring rural communal lifestyles and non-music writing. That change in direction explains why he's not currently a household name in the same category as his contemporaries Greil Marcus and Robert Christgau. Also, what set him apart from his peers was his unabashed fan-boy persona, whether it was gleefully meeting Bob Dylan backstage when the mercurial songwriter become a born-again Christian in 1979 or mingling with fellow Philip K. Dick fans at sci-fi book conventions (Williams was friends with Dick, and became his literary executor after the author died). Williams was never afraid to publically express his love of artists and their art.

Upon his return to popular music writing at the close of the 1980's, Williams wrote a trilogy of books called Bob Dylan, Performing Artist that set the tone for a different way of expressing music in print. Rather than define what the oft-debated Dylan song catalog "meant," Williams described how it made it him feel. In other words, rather than focus on facts, such the day and hour that Dylan recorded a song (or god-forbid, for the train spotters out there, what color shirt Bob was wearing that day), Williams eloquently and with great enthusiasm expressed the mood and feeling that a particular song inspired in him.

This unique perspective continued on when Williams' kick started Crawdaddy one more time in 1993 (again as a self-published and self-distributed zine out of his house) which continued for 28 issues until financial strain closed the doors for good in 2003. Taking the personal style he'd developed in his Dylan books, he now focused on contemporary music he'd previously not explored in print. For example, I'd never been a fan of hip-hop, but his writing was so compelling that I got pulled into reading and enjoying an article on the rap group Arrested Development that I'd have passed over if it was written by anyone else. Williams' text was so emotional and personal, he effectively led me through an album, 3 Years, 5 Months and 2 Days in the Life of ... , that I would normally have ignored (and which I still haven't ever heard, by the way). It was no longer just the music that drew me in, but the writer himself. I'd originally bought his Dylan books as a fan of the music, disregarding William's own legacy. But now, I'd read any genre he chose to cover.

Like many others who came of age in the early 1960s, Williams embraced folk music before the explosion of electrified rock. The members of the The Byrds, Buffalo Springfield and Jefferson Airplane began their careers as folkies, as did their journalistic peers. Paul had been particularly close to singer/songwriter Richard Farina (best known as the writer of the seminal "Pack Up Your Sorrows" as well as the brother-in-law of Joan Baez, via his marriage to her sister Mimi). When Farina died, tragically young, in 1966 after a motorcycle accident, a penniless Williams attempted to stow away on a freight plane going from Philadelphia to California to attend the funeral. He was caught, arrested and briefly detained. Decades later, he wrote an article about how distraught he was by being unable to say "goodbye" to a friend and hero.

When I befriended Paul in the early 1990s, I asked him if he had ever visited Farina's grave and he replied that he hadn't, but wished to. Standing on the streets of San Francisco, I suggested we make that pilgrimage to Carmel immediately. Paul agreed and climbing into his vintage VW microbus seemed utterly appropriate for the journey. It didn't take long to get down the coast, but we spent the better part of the day trying to locate Richard Farina's gravesite. We visited the offices of the Carmel weekly newspaper, where they located the original April 1966 obit and made a photocopy for us. This provided us with the cemetery's information, yet further confusion ensued because the cemetery had changed names over the years. (Remember, this was before the era of smart phones and GPS.) As the day came to a close, we finally reached our destination. Surprisingly, the same groundskeeper was still employed there and had been working on the day of Richard's burial. He described that fateful spring 1966 day with Judy Collins, Mimi Farina and Joan Baez all gathered round. It was a beautiful site, on top of a hill, overlooking the vast Pacific. For about 15 minutes, Paul and I stood there silently, gazing at the waves and down at Richard's tombstone. Life seemed utterly horrific and beautiful at the same time. When I heard of Paul's death I felt equally gutted, but I'm grateful for this opportunity to say goodbye to one of my friends and heroes.