Accessibility links
The Wu-Tang Clan's 20-Year Plan : The Record The group's 1993 debut was the opening shot of an audacious plan to open the music industry to hip-hop made way outside the mainstream. 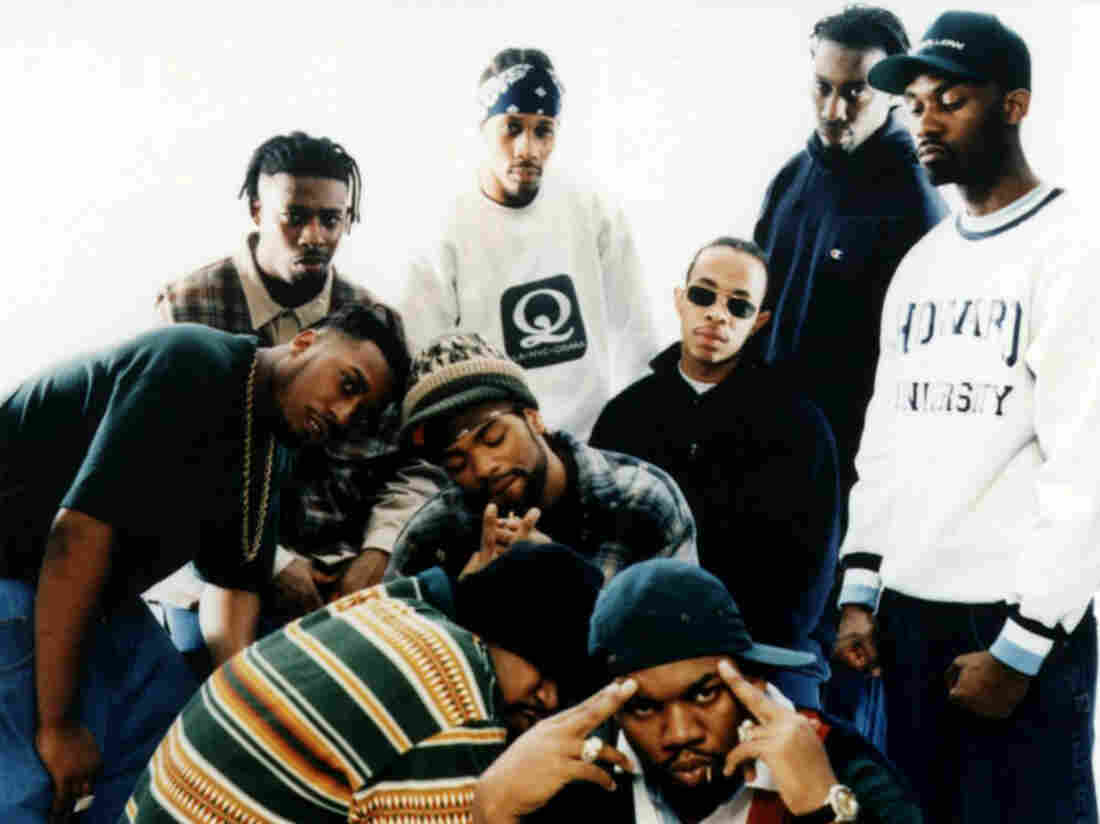 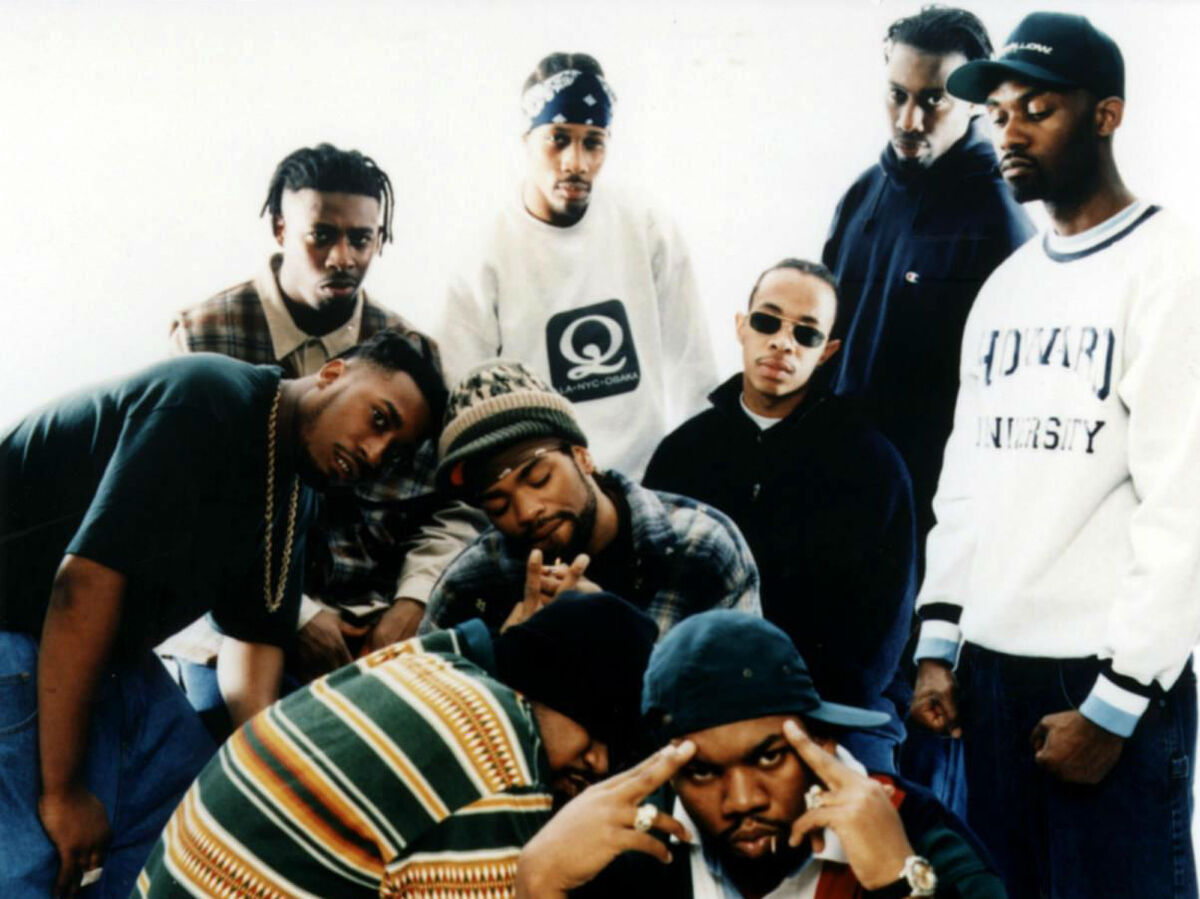 This year marks the 20th anniversary of a remarkable year in music. Over the 12 months of 1993, Queen Latifah, De La Soul, Salt-N-Pepa, Snoop Dogg, A Tribe Called Quest and more than a dozen other rappers released albums that helped to change the sound of America. One of those albums wasn't just a collection of songs — it was a business concept, too. The Wu-Tang Clan's 1993 debut was the opening shot of an audacious plan to open the music industry to hip-hop made way outside the mainstream.

Back in the early '90s, Robert Fitzgerald Diggs looked around and saw the music industry betting on rap-lite — think Will Smith and Young MC, both of whom had won Grammys in the late '80s. Songs like "Parents Just Don't Understand" and "Bust a Move" just weren't for him, or his friends.

"We were street kids," he says, "guys that was more like felons, or high-school dropouts. Not saying this is a positive thing, I'm just saying this is the difference of our character."

He saw an opportunity. "If you keep eating McDonald's, you gonna get sick. You need a real home-cooked meal. And I knew that that would be healthier. And that's what Wu-Tang was: It was a home-cooked meal of hip-hop. Of the real people."

Diggs also saw that he was going to have to prove to the industry that the style of hip-hop he wanted to make would sell. "Because if you look at hip-hop at that time," he says, "it wasn't a lot of artists selling gold or platinum albums. There was a lot of hip-hop artists, but they wasn't going gold, they wasn't going platinum."

He knew the best rappers on Staten Island. They came to his house to watch kung fu movies and battle rap and study the teachings of the 5 Percent Nation, an offshoot of the Nation of Islam. Two were his cousins, one was his roommate, a couple were, technically, his rivals. So he had to do some convincing, but he recorded a verse by each of them, added one of his own and pressed up an eight-verse, grimy-sounding, no chorus, vinyl-only single: "Protect Ya Neck."

Diggs set up a company called Wu-Tang Productions, named after the bad guys in a movie. "I thought that Wu-Tang was the best sword style," he says, "the best sword-style of martial arts. And the tongue is like a sword. And so I say that we have the best lyrics, so, therefore, we are the Wu-Tang Clan."

He changed his name to the RZA — an acronym that refers to his theological studies, asked his roommate's DJ to make a logo, and he called a meeting.

Us was the RZA, the GZA, Ol' Dirty Bastard, Inspectah Deck, U-God, Ghostface Killah, Method Man, Raekwon and Masta Killa. They all signed on to the plan. For Ghostface, signing wasn't even a question. "This is what we loved to do. We rhymed all day," he says. "Still now, but at that time, we really, really, really, really loved it."

In the winter of 1992, some of them snuck into one of the few radio stations in New York City that was playing hip-hop — Columbia University's WKCR — and tried to convince DJ Stretch Armstrong and host Bobbito Garcia to play it.

"They weren't being nice," says Garcia. "They were definitely like, 'Yo man, play this record, it's dope. La la. Put that on right now son. La la.' I listened to it, I previewed it about 15, 20 minutes later, and I was like, 'Oh, wow, this record is incredible.' So I played it. I gave the record to Stretch. Stretch can tell you what happened from there."

Listeners called in. And Stretch and Bobbito weren't the only ones playing it. Ghostface Killah remembers the first time he and Raekwon heard "Protect Ya Neck" on the radio. "Rae, he jumped to the f- - -ing ceiling," says Ghostface. "I remember that day. Me and him was at the house, waiting for it to come on. Kid Capri played it. And it was on." Club DJs, promotions people and music writers all thought it was the hottest thing out.

"The hook itself is the individual styles," says Schott Free, a friend of the RZA's who promoted "Protect Ya Neck" to radio stations. "Every four to eight bars or so, you're presented with a whole different style and sound on how to ride one particular wave, you know what I mean? That's the thrill and the shock of it all — it's just going on those rides."

One of the first record execs to come sniffing around was Steve Rifkind, who had a new label called Loud. The RZA got him to sign an unprecedented deal: For only $60,000, Rifkind got the Clan as a whole. But the RZA also convinced him to allow each individual in the group to become, in essence, a free agent. They could sign a solo deal with any other company, and take the Wu-Tang name with them.

The RZA's plan was to spread his group's sound as widely as possible. And just a few years later, members of the Wu-Tang Clan were recording for five of the six major labels, back when there were six major labels. Sales from those albums enriched each label — which meant they saw more potential in hip-hop made by street kids.

At Loud, the group's home base, Rifkind was happily taking a chance on a group that had been turned away from his competitors. But the RZA wasn't one for chances. Both he and DJ Stretch Armstrong recommended Schott Free for a job at Loud. "[RZA] said, 'Look man, you one of the only educated dudes in the Clan. We need somebody up in the office, overseeing what these guys are doing with our records!' "

And that's not all. Getting to No. 1 depended on each artist growing the Clan's fanbase. The RZA explains:

"I recall telling GZA, 'You'll get the college crowd,' " because he's the intellectual. "Raekwon and Ghost, all the gangstas" — their metaphors read like a police blotter — "Meth will get the women and children — and he didn't want to do women and children. He didn't know that, though. Method Man is a rough, rugged street dude, but all the girls love him." Method Man is playful. "Myself, I was looking more like that I bring in rock 'n' roll," says the RZA, whose rhyming style is the opposite of laid-back.

The album was called Enter the Wu-Tang: 36 Chambers, and it wasn't obvious that it would work. Everything the band had released so far was raw. Members contributed ideas and even some of their own money, but nobody knew how the RZA was going to pull it all together. He rented time in a Manhattan studio with the then-new editing technology Pro Tools and packed movie clips and old interviews into the music.

"It took me like a whole week or two to keep doing it," says the RZA. "And the rest of the band didn't know it. They didn't hear it until it was done."

Five years after the group signed on to an idea, its 1997 followup, Wu-Tang Forever, debuted at No. 1. It shipped 4 million copies in less than six months. I asked the RZA if he actually had a 20-year plan.

"This may sound unbelievable to you," he says, "but I told the crew in the basement meeting that from my calculations, and from what I'm feeling, that this will last 20 years. I said, 'If we smart, we can plunge at that moment, or we could gracefully make a safe landing to 20 years.' "

Safe is an understatement. The improbable success of the Wu-Tang Clan — their platinum plaques and world tours, alone and together — kicked open the door for other rap groups that wanted to make home-cooked music, for the real people.