Accessibility links
Brad Paisley's 'Accidental Racist' And The History Of White Southern Musical Identity : The Record The song that has made Paisley the object of derision on the Internet is part of a complicated expression of white Southern heritage that stretches back to the early 20th century and reaches its peak on "Sweet Home Alabama." 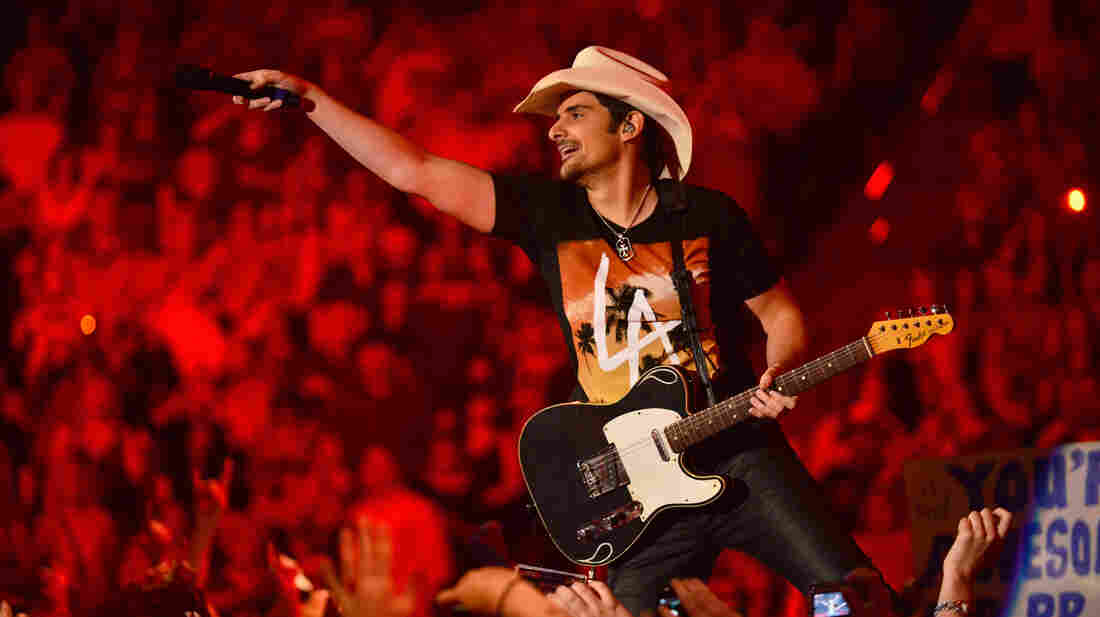 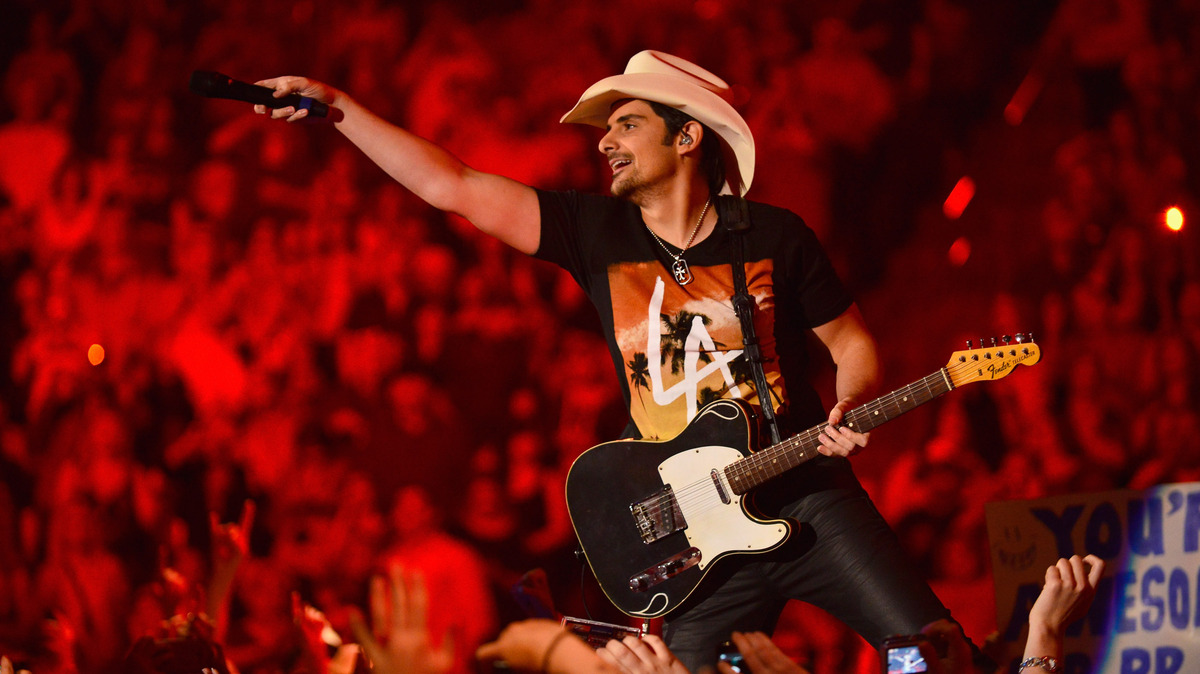 Brad Paisley is a sly country singer, a slick electric guitarist and a sometimes repentant West Virginian. "Accidental Racist," off his newest album, Wheelhouse (you may have read about this song a hundred times in the past 24 hours), begins with Paisley thinking about telling his Starbucks barista that really, the T-shirt he's wearing with the stars and bars of the Confederate battle flag just means he's a Lynyrd Skynyrd fan, "caught between southern pride and southern blame." By the end, LL Cool J has been dragged in to rap a reconciliation as treacly as Paisley's melody: "If you don't judge my do-rag / I won't judge your red flag / If you don't judge my gold chains / I'll forget the iron chains." But nobody is pretending there's a true end in sight. As Paisley notes himself, Reconstruction was more than a day ago: "We're still siftin' through the rubble after a hundred-fifty years."

The history of 'Accidental Racist' is the history of how white Southern musicians — heatedly, implicitly, at times self-servingly and not always successfully — try to talk about who they are in answer to what others dismissively assume they are."

As you may have heard, Paisley is sifting through some rubble of his own right now, having been declared a national laughingstock by virtually all commentators coming from outside mainstream country. But then, this condescending dismissal is nothing new. There is a history to "Accidental Racist," the history of how white Southern musicians — heatedly, implicitly, at times self-servingly and not always successfully — try to talk about who they are in answer to what others dismissively assume they are.

After all, while the Jim Crow South was Anglo supremacist politically, American culture offered a very different dynamic. Ever since white Northerners started putting out their records, Southern whites have represented a backward rural mindset in a national culture of jazzy modernity. Black Southerners, by contrast, were jazz itself: urbanely looking forward, the cradle of hot rhythm. The contrast is evident in the records that launched the hillbilly/country and race/R&B categories. Georgia mill worker Fiddlin' John Carson's "The Little Old Log Cabin in the Lane," released in 1923 but almost as old as Carson (born 1868), was an 1871 lament for the slave life by a protagonist clutching his dog. Whereas Mamie Smith and Her Jazz Hounds' brassy 1920 "Crazy Blues," written by an Atlantan, featured a narrator scoring drugs and shooting a cop. Variety loved jazz but scorned the hillbilly in 1926 as " 'poor white trash' genera. The great majority, probably 95 percent, can neither read nor write English. Theirs is a community all to themselves. [They are] illiterate and ignorant, with the intelligence of morons."

The "morons" responded in a few different ways in the 1920s, all of which remain as default settings today: glorifying tradition, assimilating through black-identified sounds, selling regional separatism and flying the flag of resistance. The Carter Family emphasized the grainy vernacular authenticity of mountain music. Jimmie Rodgers performed "Blue Yodels" as edgy as "Crazy Blues" on vaudeville stages, even once recording with backing by Louis Armstrong. The Grand Ole Opry, broadcast on radio throughout the South, established Nashville as a place that would target a separate genre of commercial music to a separate audience, both fortifying white Southern sounds and adding to their archaicism and marginality: Roy Acuff's "Great Speckled Bird," a key anthem, defended the Bible. The fourth and final answer, outright screw you rebel fury, was rarer, though we can hear it in recently rediscovered Charlie Poole, who snarled, "I was born in Alabama, raised in Tennessee / If you don't like my peaches then don't shake my tree" before drinking himself to death.

If anything promised to bury the backward white South issue, it was rockabilly (i.e., hillbilly rock), that signature 1950s moment when Sun Records in Memphis offered Elvis Presley, Johnny Cash, Jerry Lee Lewis and Carl Perkins combining traditionalism, regional enterprise, crossover and a rebel yell in a whole lot of shaking. For young white Southerners, this was a vision of redemption. John Egerton later remembered: "The musicians and the music elicited far more respect and admiration from us than anyone in an adult leadership role. In truth, we marched to a different drummer, or guitar, or brass drum, and the beat was its own reward." Even Pat Boone, Michael Bertrand notes in Race, Rock and Elvis, declared "racial segregation is sickening" at a time when that was a lot more dangerous than swiping "Tutti Frutti."

But as rock 'n' roll became Woodstock rock, as the South became the bloody ground of civil rights and Alabama Gov. George Wallace's credible presidential bids in 1968 and 1972 revealed the extent of white embattlement, the cultural image of the white South returned to bottom — Okies from Muskogee standing by their man. White Southerners faced the same old choices in new times. They could embrace black music and contemporary life and cross over, like former Texan Janis Joplin. They could go bluegrass singing the Carter Family's now revived "Can the Circle Be Unbroken." Or they could join the notion of regional separatism to new concepts of identity: In songs by Merle Haggard and Loretta Lynn, that great euphemism, country, became something you could be proud of like James Brown was proud to be black.

This time, however, there was a rebel anthem nobody could ignore. "Sweet Home Alabama" is the tag on the license plate of most cars in Alabama, but it has a strange message for such an emblem once you get past the part about skies that are so blue — why is Ronnie Van Zandt, leader of a group of Floridians, insulting Canada's Neil Young? Young, in 1970, had updated Variety's stance to castigate what he saw as a land of "screaming and bullwhips cracking" in "Southern Man." Two years later, in "Alabama" — whose line "swing low Alabama" Lynyrd Skynyrd would transmute — he framed heritage as hate: "Banjos playing through the broken glass ... Don't it take you down home?"

Skynyrd, a leader of the Southern rock revival, felt its region deserved better. The too-twisted-to-untangle politics of the second verse seemed to be y'all failed to change the world too: "In Birmingham they love the governor (boo boo boo) / Now we all did what we could do / Now Watergate does not bother me / Does your conscience bother you? / Tell the truth." Wallace was going to give them a medal before an aide pointed out the black female backing singers booing him. But the third verse switched happily to culture: "Now Muscle Shoals has got the Swampers / And they've been known to pick a song or two / Lord they get me off so much / They pick me up when I'm feeling blue."

The Swampers were the Muscle Shoals Rhythm Section, whites raised on rockabilly and black R&B who now made soul records for Aretha Franklin and Wilson Pickett. As the Drive-By Truckers, led by Patterson Hood, son of Swamper bassist David Hood, put it in "Ronnie and Neil," their great 2001 meditation on this moment, "Meanwhile in North Alabama, Lynyrd Skynyrd comes to town / To record with Jimmy Johnson at Muscle Shoals Sound / And they met some real fine people, not no racist pieces of shit / And they wrote a song about it and that song became a hit." Young, it turns out, loved the song that bashed him and befriended Van Zandt, said to be wearing a Young T-shirt when the Skynyrd plane crashed in 1977. The Truckers call such unlikely outcomes "Duality of the Southern Thing."

But that moment of reconciliation, a time of redneck rock and Willie Nelson smoking pot on the roof of Jimmy Carter's White House, proved equally short-lived. By the Clinton and Bush years, a now solidly white Republican South, bashed as Jesusland or the neo-Confederacy, came to embody retrenchment while the "Dirty South" gave us OutKast and Lil' Wayne. And the old choices for white Southern musicians remained. Embrace a by now almost cartoonish traditionalism, like the multiplatinum bluegrass soundtrack O Brother Where Art Thou? Shake a fist and put a boot up somebody's ass: Toby Keith and Hank Williams, Jr. Stay regional with your head down, like George Strait and Reba. Or embrace black music and pop crossover, like Justin Timberlake of Memphis, Tenn., working out an enduring partnership with Norfolk, Va.'s Timbaland.

The surviving members of Lynyrd Skynyrd, now led by Gary Rossington, momentarily gestured in 2012 toward giving up one of their trademarks: performing in front of a version of the Confederate battle flag, sometimes scrambled with the American flag and the red X of Alabama's state flag. Massive resistance from the fan base led to a quick reversal, accompanied by a tortured statement by Rossington: "Myself, the past and present members (that are from the South), are all extremely proud of our heritage and being from the South. We know what the Dixie flag represents and its heritage; the Civil War was fought over States rights. We still utilize the Confederate (Rebel) flag on stage every night in our shows, we are and always will be a Southern American Rock band, first and foremost. We also utilize the state flag of Alabama and the American flag, 'cause at the end of the day, we are all Americans. I only stated my opinion that the Confederate flag, at times, was unfairly being used as a symbol by various hate groups, which is something that we don't support the flag being used for. The Confederate flag means something more to us, Heritage not Hate."

Tradition, rebel spirit, a frustrated desire to reach "all Americans": One assumes Brad Paisley was reading every word before he wrote and recorded "Accidental Racist." Paisley is a complicated figure in country music. He's an avid traditionalist, inducted into the Grand Ole Opry very early in his career after he'd volunteered to play it 36 times, seemingly every free weekend, "because, to me, that recharges me." He's also, like longtime Dixie Chick Natalie Maines, married to a Hollywood actor and comfortable in show business outside Nashville. Maines felt bullied out of country music, but Paisley hosts the Country Music Awards and revels in ranging from celebrating the election of Barack Obama ("Welcome to the Future") to being no less upbeat about schlocky '80s country ("Old Alabama"). Wheelhouse, the new album from country's ultimate postmodernist — and how retro is that? — begins with a 1919 snippet of "How Ya Gonna Keep 'Em Down on the Farm," employs rhythm loops and offers Charlie Daniels rapping for those less into LL, the comic talents of Monty Python's Eric Idle and a line about dancing to "My Sharona" at weddings.

None of which quite redeems "Accidental Racist," though longtime listeners to mainstream country might filter its simpering melody through Garth Brooks' "What She's Doing Now" and its overweening ambitions with Brooks' "We Shall Be Free." Soft can register as radical if you hear Nashville in full format context. I don't look to music for policy solutions, just proof that what lives in people's heads is more complicated than their voting choices might lead you to believe. Paisley can joke about his "Southern Comfort Zone" in a No. 1 hit. Then he can risk some Southern discomfort, too. And the story of "Sweet Home Alabama," the story of so-called morons and their complicated responses to unambiguous derision, staggers on.