Accessibility links
'A Truth Never Told': Remembering Slayer's Jeff Hanneman : The Record The guitarist, who died Thursday, understood that metal works in darkness, rooting for something, anything that makes sense of this ugly human existence. Hanneman channeled it into a band that exemplifies pain. 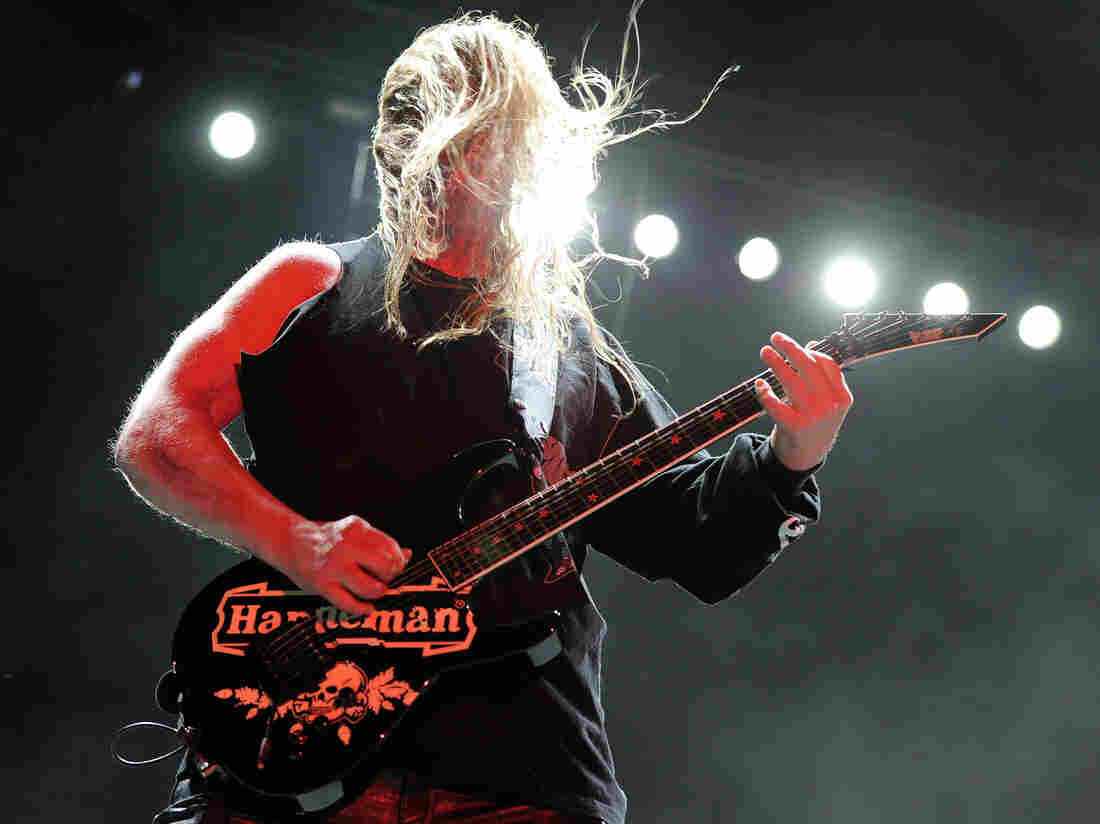 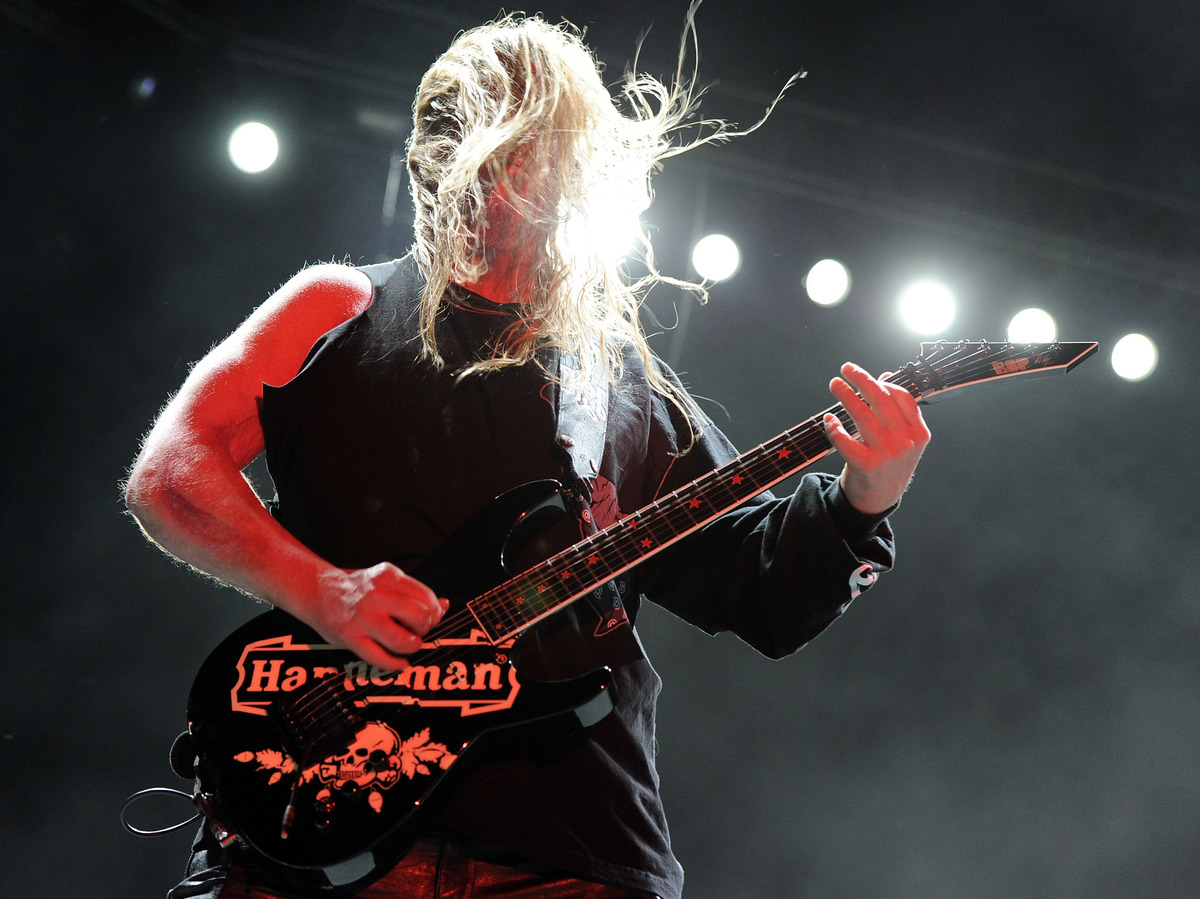 Slayer inspires the kind of rabid fandom that causes short yet intimidating bald men to yell SLAAAAYYEEERRR while pounding cheap beer, while in lines for shows, while in line for groceries. Before we could tattoo its logo on our arms, we took Sharpies to our notebooks and lockers, pledging our unholy allegiance to Araya, Hanneman, King and Lombardo (or Bostaph, if you please). Along with Metallica, Megadeth and Anthrax, Slayer is one of the Big Four '80s thrash metal bands. In the decades that followed, Slayer is the only one to maintain its credibility among an extremely judgmental hoard.

Guitarist Jeff Hanneman, who died of liver failure at 49 on Thursday, was the songwriter, sometimes-lyricist and shredding fingers behind some of Slayer's most enduring songs: the impossibly fast and insane "Angel of Death," the manic "Dead Skin Mask" and "South of Heaven," which would eventually beckon me to its "never ending search for a truth never told."

I first heard "South of Heaven" somewhere around 2002 and, like most of my most significant music discoveries, it came to me via the college radio station where I volunteered, WUOG in Athens, Ga. One late-night DJ had an affinity for ridiculously over-the-top power metal like Blind Guardian and Rhapsody and willfully ignored the then-burgeoning, slow-moving post-metal scene stemming from Isis and Neurosis. But one night, the opening clarion call to "South of Heaven" rang from my dorm room, sounding like one of the Wagner records I'd listened to in a yearlong classical phase as a kid. On top of it squealed harmonics that bent like hot iron, ponderous and foreboding. I barely let the song reach the chorus before I called the station.

Perhaps it's merely sentimental, but for all of Slayer's classics (and even their solid current-day records), 1988's South of Heaven remains my favorite. It's set apart by slow-building thrash, an oxymoron for a genre built on speed, and was primarily written by Hanneman, merely by circumstance. Guitarist Kerry King had just gotten hitched and more or less left Hanneman to his own devices.

Hanneman was the punk rocker of the band, frequently citing the Dead Kennedys, T.S.O.L, and Black Flag as influences. For a hardcore kid like me, that was my way in to Slayer's chaos. The band would even go on to record an underrated album of punk covers in 1996 called Undisputed Attitude, which also included a few originals. But surely, Black Flag's doomy hardcore obsession with Black Sabbath on My War had seeped into Hanneman's fingers by South of Heaven, crawling with riffs at a graven and sinister pace. He also wasn't afraid to groove, a no-no in thrash, which is perhaps why Hanneman ultimately penned Slayer's most memorable songs.

South of Heaven's slower pace was a reaction to Slayer's previous record, the instant classic Reign in Blood. For Decibel magazine's monthly "Hall of Fame" feature in issue No. 101, Hanneman said of the record, "We didn't want to beat out [Reign in Blood]. It'd be kind of ridiculous, 'cause that album's so fast. So, we all talked about it: slowing down the album a bit to freak everybody out."

In the mind of Slayer fans, we've built characterizations of the members: Kerry King hates Christianity, Tom Araya screams about the devil. Jeff Hanneman, for all of his laid-back demeanor, thought seriously about war and destruction. It got everybody in trouble; like Lemmy in Motorhead, Hanneman was morbidly fascinated by Nazi history. That caused the most grief, yet fueled some of Slayer's most damning material, like "Spill the Blood" and "Angel of Death." Like an Ingmar Bergman film, metal often works in darkness, rooting for something, anything that makes sense of this ugly human existence. Hanneman understood that and channeled it into a band that exemplifies pain.

But beyond the lyrical concepts and riffs were Hanneman's guitar solos, numbing and chaotic, intertwined with Kerry King's cleaner — but no less meaner — shred. They were two sides to a coin that split a stage, something I'd never realized until the only time I saw Slayer live, in 2007. And even though Hanneman withdrew from touring after contracting necrotizing fasciitis, a debilitating skin disorder, in early 2011, something will never be the same about Slayer now. We will wander in darkness, where hell awaits.