Accessibility links
The MIDI Revolution: Synthesizing Music For The Masses : The Record The language used to translate sound into digital information celebrates its 30th anniversary. Today, MIDI is everywhere, including nearly every pop song on the radio and the fountain at the Bellagio Hotel in Las Vegas. 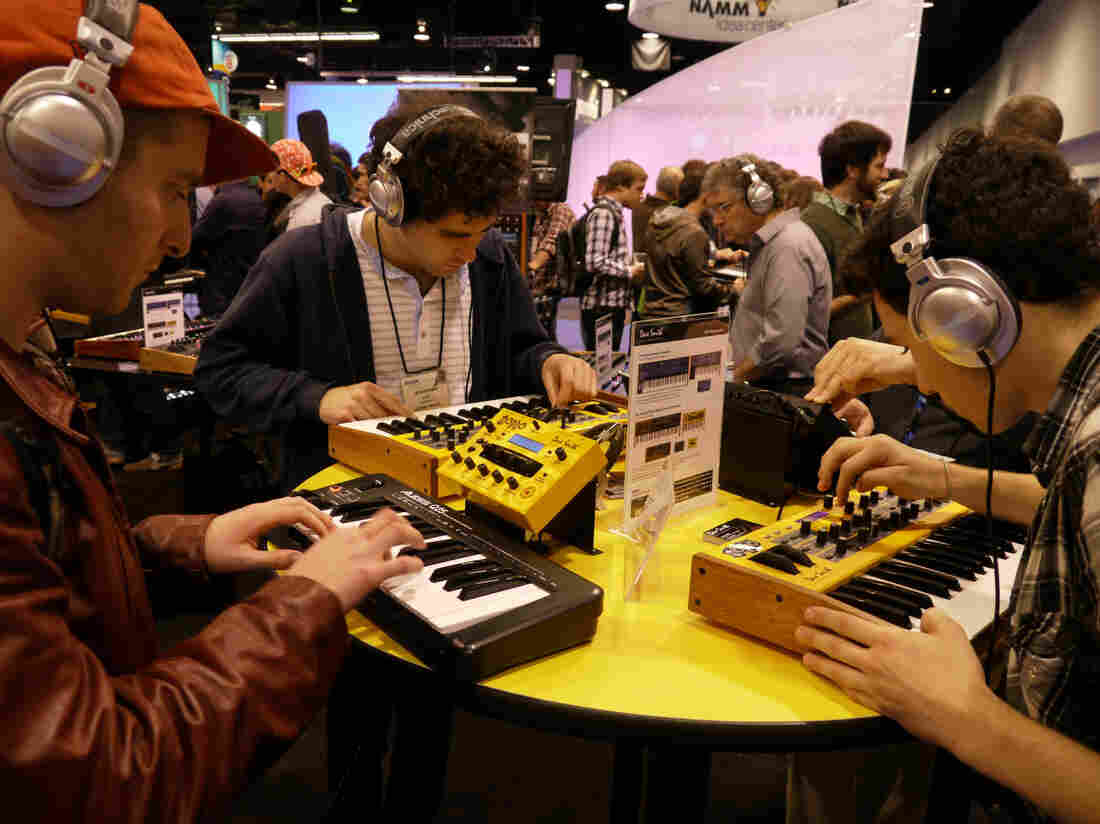 Attendees at the 2012 show of the National Association of Music Merchants. MIDI was first demonstrated at the NAMM show in 1983; today, it's built into most of the gear at the show. Tom Sky/Corbis Images hide caption 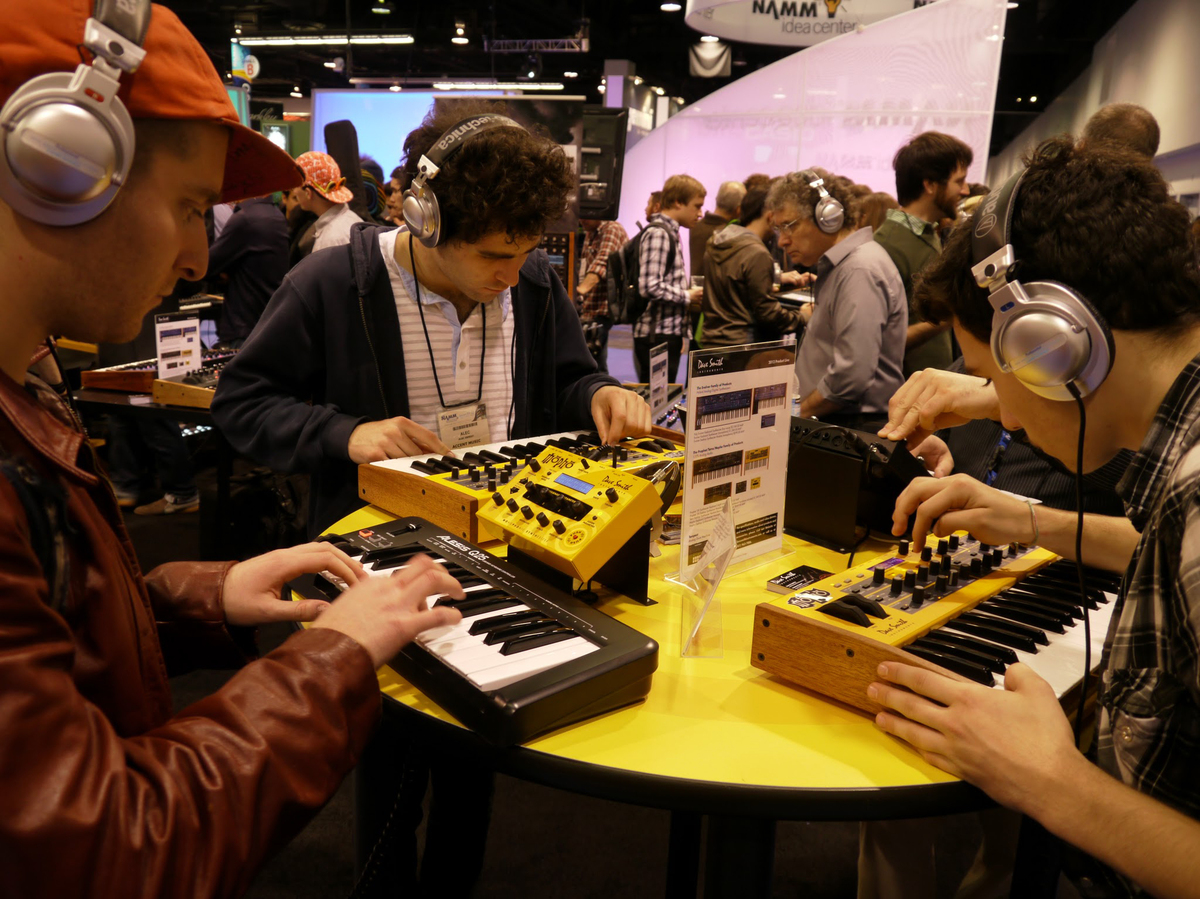 Attendees at the 2012 show of the National Association of Music Merchants. MIDI was first demonstrated at the NAMM show in 1983; today, it's built into most of the gear at the show.

You can't hear it, not exactly, but it's in almost every song on the radio. It's a 30-year-old technology that hasn't changed much over the years but is now used in ways that its creators likely never imagined. In contemporary music, there's nothing closer to a universal translator than MIDI.

Simply put, MIDI is a way for computers to understand musical instruments. Until 1983, when the technology was first demonstrated in a presentation to the National Association of Music Merchants, synthesizers were stand-alone electronic instruments, incapable of linking up with computers. But the idea for MIDI goes back to 1978, when engineer and synthesizer designer Dave Smith put out the Prophet 5, one of the earliest musical instruments to include a microprocessor.

After Smith's creation, a number of designers built similar synthesizers, all equipped with digital compatibility. This meant they could communicate digitally with one another, but it was a complicated process: There was no standard way for these instruments to connect.

"And then in the early '80s we all started realizing that it was kind of silly for all of us to have our own proprietary interfaces that couldn't talk to each other," Smith says. "We realized that if the industry was going to grow much, that we really should have a common way of doing that."

So Smith worked with a team of designers to create what was called the Musical Instrument Digital Interface, a technology that unites synthesizers and computers. Most synthesizers work by pressing a key on keyboard to generate an electrical current, which becomes sound by passing through an amplifier and speakers. MIDI turns that current to something that computers could understand.

"What MIDI does is it digitizes that process," says Tom White, CEO of the MIDI Manufacturers Association. "Instead of actually creating a voltage, there's a series of numbers that are generated every time you press a key or turn a knob on the synthesizer. And the wonder of all that, the magnificent part about it is, since its all numbers, then a computer can process it. So what happens is, you can play something on a synthesizer, the computer can store it and then it's easy to play it back or edit it."

So lets say, for example, a middle C is struck on a keyboard that's hooked up to a laptop. MIDI turns all of the information about that note — its timbre, length, volume, etc. — into code that the computer can then change. That C can become a D or be stretched to twice its length. The possibilities are nearly endless. And it's not just keyboards that can plug in. With the right setup, electric guitars, violins, basses — almost anything — can be played and manipulated through MIDI. Today, much of what's heard on commercial radio was made with the technology.

How does MIDI work? Listen to a demo.

The reason MIDI is everywhere has a lot to do with the intent of its creators. At the time, Smith, who is sometimes called "the father of MIDI," was with a company called Sequential Circuits. He set up a meeting with keyboard companies Roland, Yamaha, Korg and Kawai.

"The idea was, it didn't have to be perfect. We wanted something everyone could agree on and then we wanted to give it away because we wanted to make sure it became universally adopted," Smith says. "I don't even remember discussing much about the possibility of charging royalties or licensing fees. It was just assumed that we would give it away."

Today, that decision has allowed MIDI to travel far. In addition to music, MIDI is also used to control light shows and animatronics. It was used to generate ring tones in early cellphones. What was first used to link one synthesizer to another is now used to control the synchronized fountains at the Bellagio Hotel in Las Vegas. Its impact on the music industry was recognized this year when Smith and his collaborator Ikutaro Kakehashi won a technical Grammy for their work.

"I use a MIDI controller when I perform live and also when I'm writing," Herndon says. Instead of a keyboard, her controller has buttons, knobs and sliding faders that can map to sounds on her computer.

"Maybe this kind of Western piano interface isn't the best way to write music, and that's what's so interesting about MIDI," she says. "Maybe the best way to compose a new piece is to turn a knob in a certain way or to use faders. That's, I think, not to overblow it, but that's kind of revolutionized the way that we approach composition."

A revolution spawned by a desire for connection and collaboration, not dollars and cents.