Accessibility links
Robots In Ecstasy: Daft Punk's 'Memories' Embraces The Pleasure Principle : The Record The dance music scene that has risen in the past decade owes a debt to the heavy beats of Daft Punk's music. But the long-awaited album from the Parisian duo turns its back on EDM to bask in the smooth sounds — and liberation --of the 1970s. 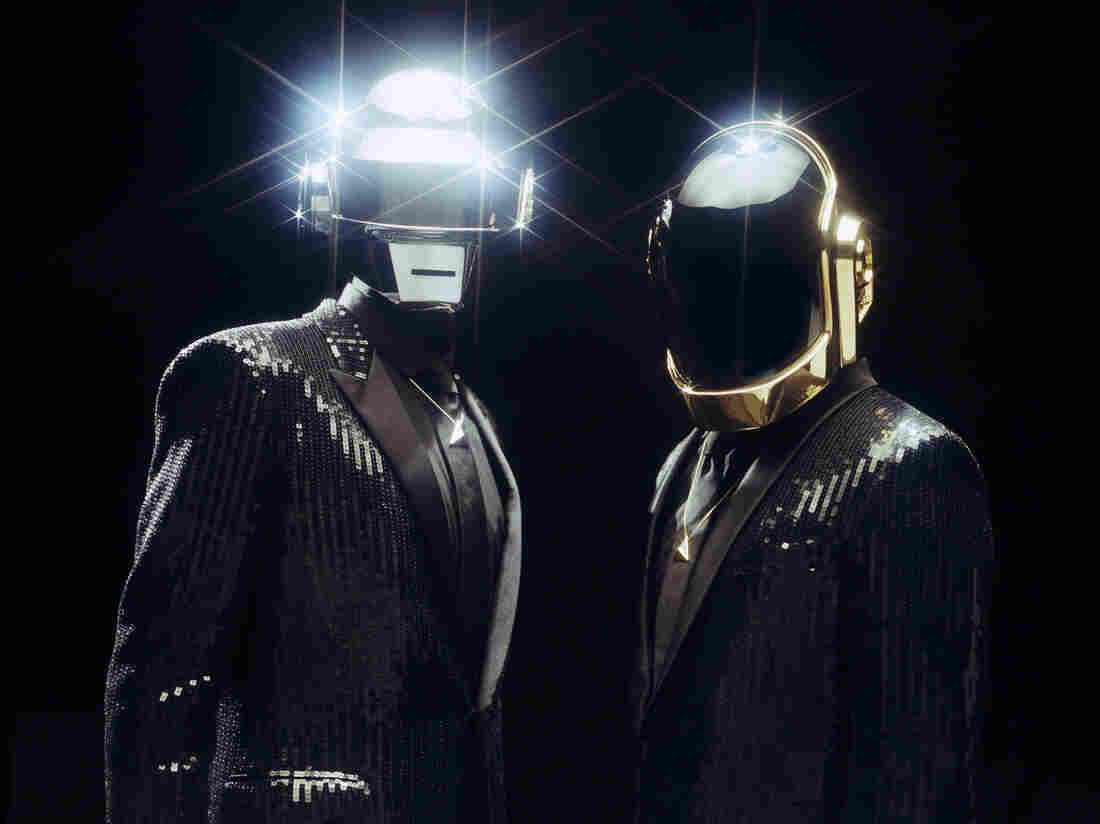 On May 21, Daft Punk will release Random Access Memories, the duo's first album since 2005. David Black/Courtesy of the artist hide caption 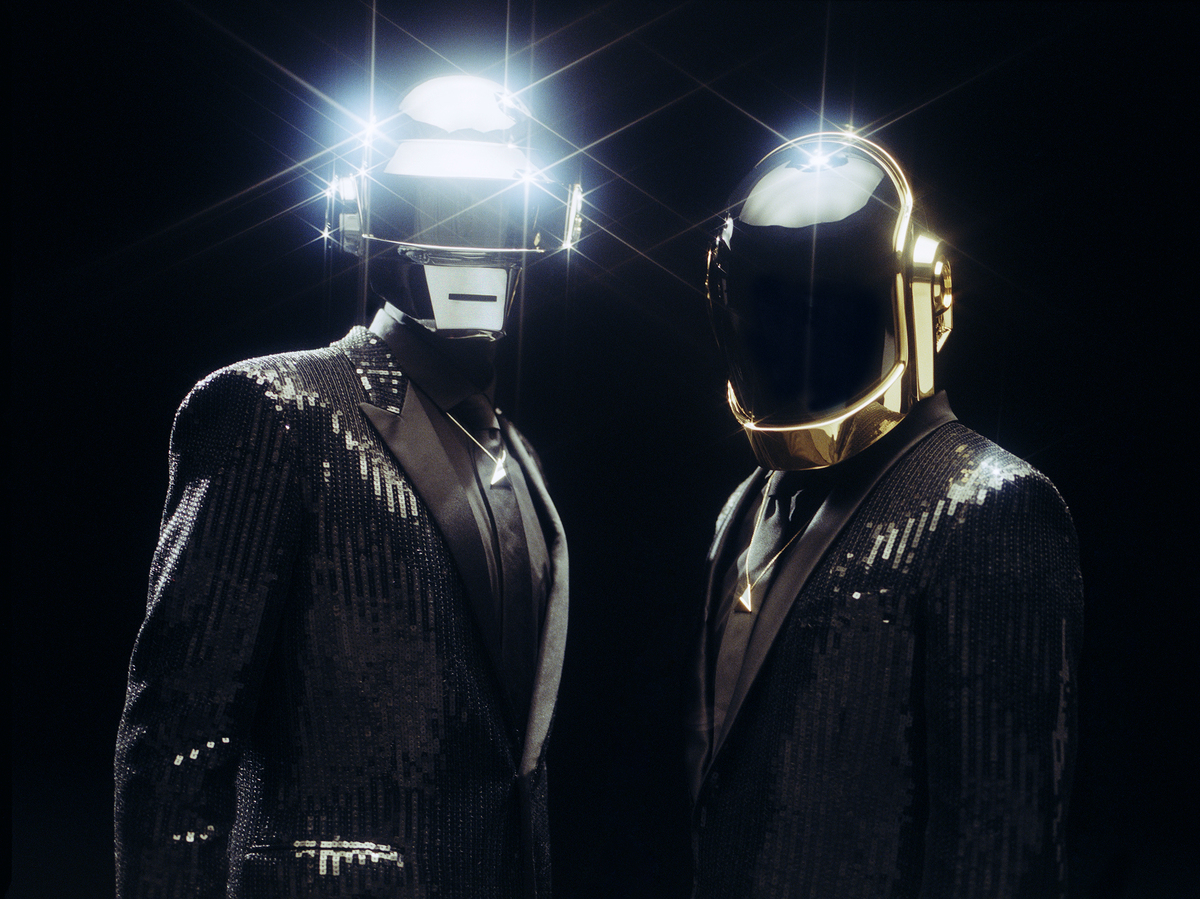 On May 21, Daft Punk will release Random Access Memories, the duo's first album since 2005.

David Black/Courtesy of the artist

"Give life back to music," coo the robots on the first track of Daft Punk's new album, Random Access Memories, which showed up yesterday on iTunes after a long period of near-hysterical anticipation and advance marketing. Does the veteran Parisian dance music duo succeed in doing this on its first album in eight years? Your answer will depend on how you view music's relationship to of the central human experiences: pleasure, the tangible satisfaction of body and soul.

For purists, Random Access Memories may instantly disappoint because it abandons EDM's tried-and-true routes to body-mind fulfillment: accelerating machine beats, busy noise and that roller coaster effect, the drop. "It's confusing. There are no drops," declared a writer for the site White Raver Rafting, referring to the moments when a fast computer-generated beat suddenly breaks and shifts its rhythm. Instead of tightly focused tracks shaped through such electronic manipulations, RAM features relatively loose live jamming, pop-operatic balladry and the Bach-quoting keyboards of progressive rock.

On one level, these changes seem to serve nostalgia instead of the current dance music ideal of rapidly accelerating progress. Daft Punk's choice to sink deeply into protoplasmic mud where contemporary dance music was born will strike some as less conservative than contrarian. The most active collaborator on RAM is Nile Rodgers, the producer and guitarist whose work with his band, Chic, and many other artists built the bridge between funk/rock and disco. Also prominently featured are the blockbuster songwriter Paul Williams, best known for his baroque rock opera Phantom of the Paradise, and Giorgio Moroder, Eurodisco's Adam, who fabricated a distinctly dirty Eden with his Eve, the late great Donna Summer.

These 1970s luminaries define the sound and the substance of RAM. While plenty of younger collaborators surface — including Pharrell Williams, Julian Casablancas of The Strokes and Animal Collective's Panda Bear — none makes a contribution as crucial as Williams's scenery-toppling vocal on the eight-minute long ballad, "Touch," or Rodgers's guitar riffs throughout, which run like ground wires through the album's grooves. Moroder is mostly on board as a patron saint, but his dictum to "free your mind" is important. This 74-minute excursion into a re-imagined past seeks to rewire the brains of Daft Punk fans by forcing an encounter with a central principle of 1970s popular culture: the pleasure principle. Its songs suggest that by understanding how pleasure felt then, we might better pursue pleasure now.

On the surface, songs like the florid "Touch" or the pleasantly ecstatic "Lose Yourself To Dance" seem to celebrate a 1970s defined by hedonism and self-indulgence. But that's only one layer. Disco was explicitly tied to gay and (as writers like Alice Echols have shown) women's liberation — the way bodies moved on the dance floor inspired liberation movements in the streets. Not much later, soft rockers responded by offering new versions of masculinity that were more sexually expressive and free. Funk, too, played a major role, taking cues from the civil rights movement to free the mind — and as Funkadelic famously said, the ass followed. 1970s music described and fueled this pleasure revolution.

Musically, RAM harkens back to another 1970s pleasure source — the promiscuous eclecticism of the pop scene. Though the image of disco hardened into its Top 40 version after the success of Saturday Night Fever, in reality the genre made room for everything from Florida soul to Italian synth suites to jazz fusion and futuristic take-offs on classical chestnuts. On a purely musical level, RAM defines pleasure through these oozy encounters among sounds — a prog rock keyboard line blending with some guitar boogie or a wandering New Age melody finding focus in a pulsing house beat.

The problem with exploring how pleasure worked in earlier times is that some people now just won't relate. "My dad had an incredible time dancing to this Daft Punk album at his law school prom," tweeted the writer Jeff Weiss after hearing RAM, expressing the views of many who find any version of fun that even remotely smacks of the parental not just dull, but embarrassing. (Weiss did later add that he he thinks half of RAM is great.) Yet while some within the EDM scene may reject RAM as old-fashioned, the album fits very well within the larger world of pop. After all, rock bands like Fleet Foxes, and divas like Solange have been mining the past for something that feels more personal for a while.

But what does it mean to be "personal," anyway? What is a real man? That, too, was a central question of the 1970s, and it's a central one on RAM. It's couched in science-fiction terms here, suiting the central conceit of Daft Punk — the masked identities that allow two musicians who "look not unlike a couple of guys in a rock band," as Zach Baron recently wrote in GQ, to remain both private and mysterious. Like the 1970s band KISS, Daft Punk exists through its disguise and is trapped by it. And like the sci-fi films of the 1970s that reconsidered humanity through the lens of the all-too-human robot or alien, RAM plays with the idea that machines might experience pleasure as well as pain.

There is one glaring omission from Daft Punk's foray into vintage pleasures. Where is the female voice representing those who truly defined that liberatory spirit? Donna Summer, who died last year, may not have been available, but plenty of others could have filled that role. The body and soul satisfactions RAM offers are many, but without that feminine presence, they remain incomplete.