Accessibility links
Waxahatchee: A Lonesome Voice, Raised In Basements : The Record At 24, Katie Crutchfield has already had multiple careers as a musician. She broke through last year with an aching, bare-bones solo album — but the follow-up, Cerulean Salt, has roots in her years playing underground punk shows. 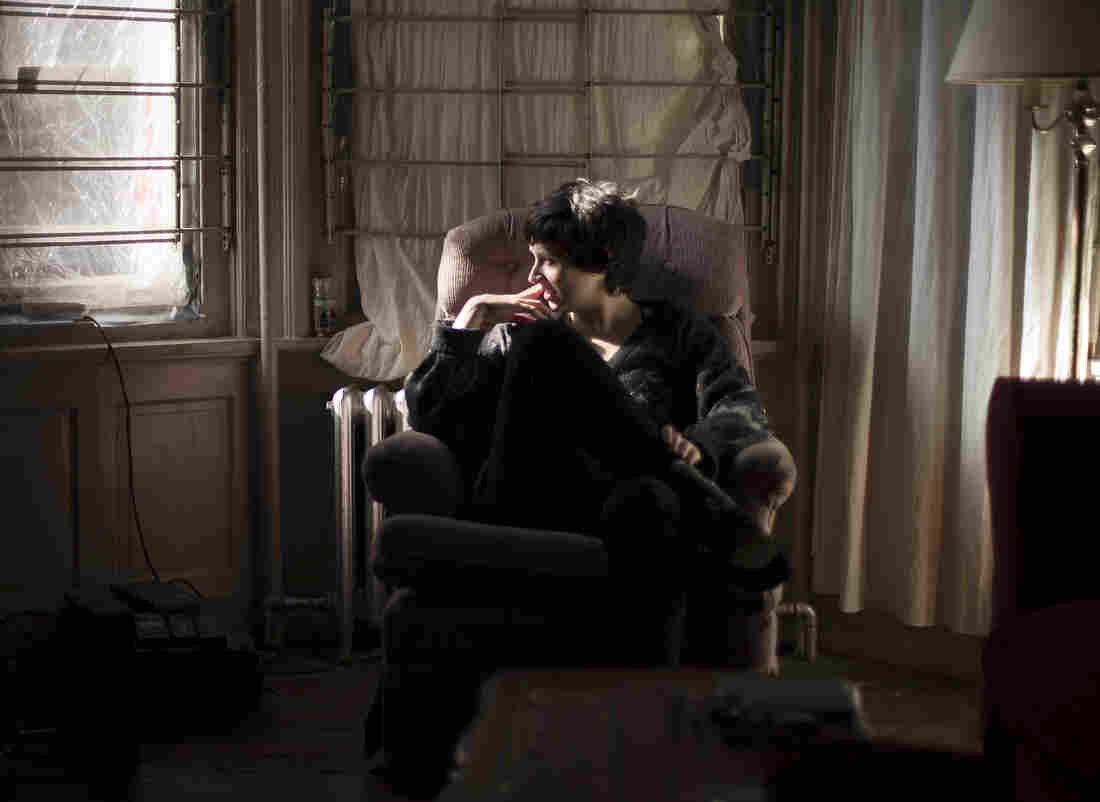 Katie Crutchfield of Waxahatchee relaxes in the west Philadelphia house where her second album, Cerulean Salt, was recorded. Will Figg for NPR hide caption 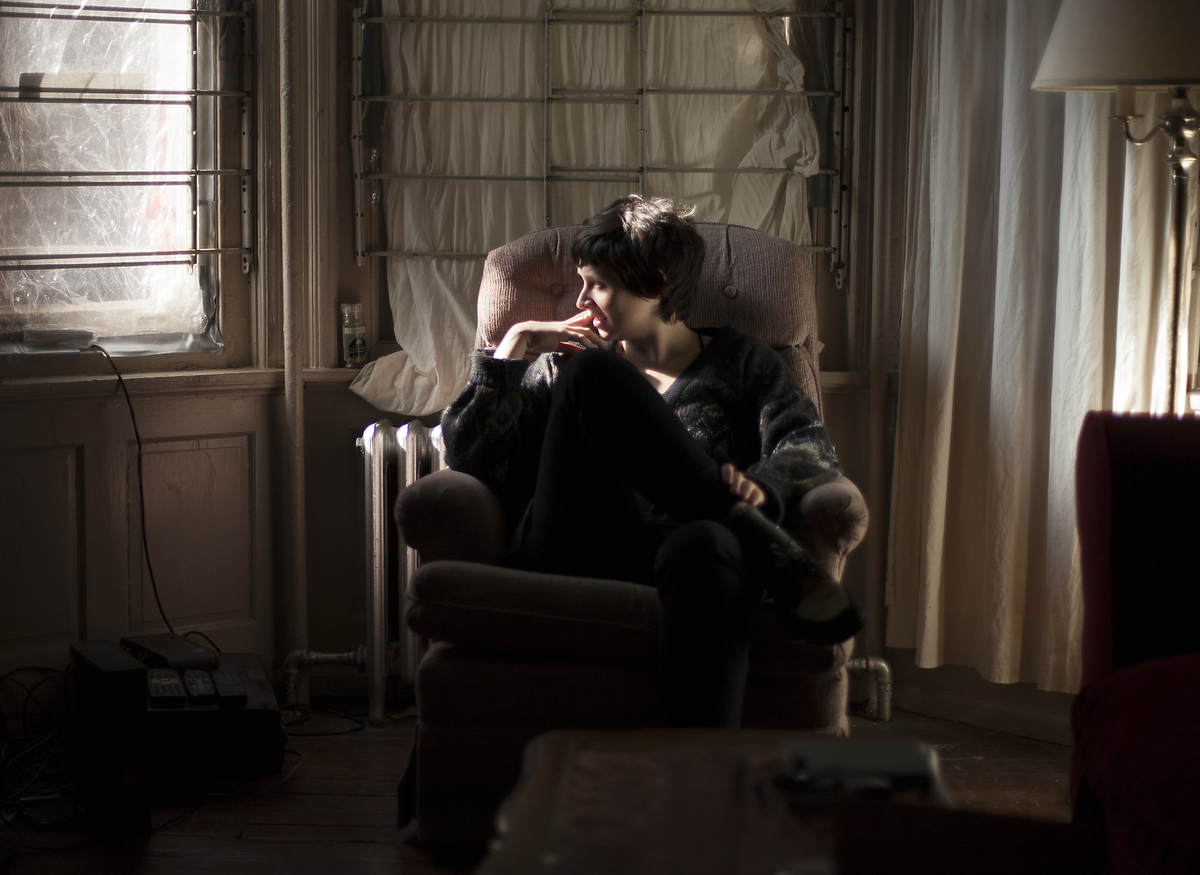 Katie Crutchfield of Waxahatchee relaxes in the west Philadelphia house where her second album, Cerulean Salt, was recorded.

Will Figg for NPR

Katie Crutchfield's eyes light up as she says this last word, but her smile turns sheepish as she recounts what her bandmates, on hearing the pitch, gently reminded her: There's already a very famous album by that name.

"I was like, 'Oh yeah,' " says the 24-year-old songwriter, laughing and noting she's a fan of the Joni Mitchell classic. "I completely forgot about that. She got there first. She got there way before I was born."

We're sitting on the back porch of Katie's home, a three-story row house in west Philadelphia. Down the stairs, behind us, is the basement room where Cerulean Salt, her second album as Waxahatchee, was recorded last fall. Katie shares the house with seven musician friends, one of whom — her twin sister, Allison — is also her oldest collaborator. The two of them grew up in Birmingham, Ala., with a basement of their own.

"We hit this point when we were, like, 14, where we kind of didn't hang out with anyone else," Allison says. "Every day we got home from school, would eat a snack and then go downstairs and practice until my mom was like, 'OK, no more!' "

The twins started their first rock band, The Ackleys, in high school. Katie sang lead and played guitar; Allison started on drums and switched to keyboard. They booked their first shows at a Birmingham venue called Cave 9, run by a local tattoo artist named Aaron Hamilton. He says the group's early gigs were shaky, but the music showed potential — especially Katie's lyrics.

"It's simple for what it is, but it's so much more than what should have come from a 15-year-old," Hamilton says. "Your very first band, it's never good. It's never intelligent. It's just hitting a guitar, making some noise and having fun."

Hamilton says part of the mission of Cave 9 was to let those moments happen in public: The space gave developing bands their first chance to sink or swim in front of real audiences. But he took a special interest in The Ackleys, helping them record and release music on his own small label, and connecting them with places to play outside Birmingham.

"We really tried to allow them some freedom," says the twins' mother, Tracy Crutchfield, who remembers feeling apprehensive as the young band began taking weekend trips to play neighboring towns. "I didn't want them to have any regrets. And they had such a drive, such a passion for it, that I just felt like it was the right thing to do." 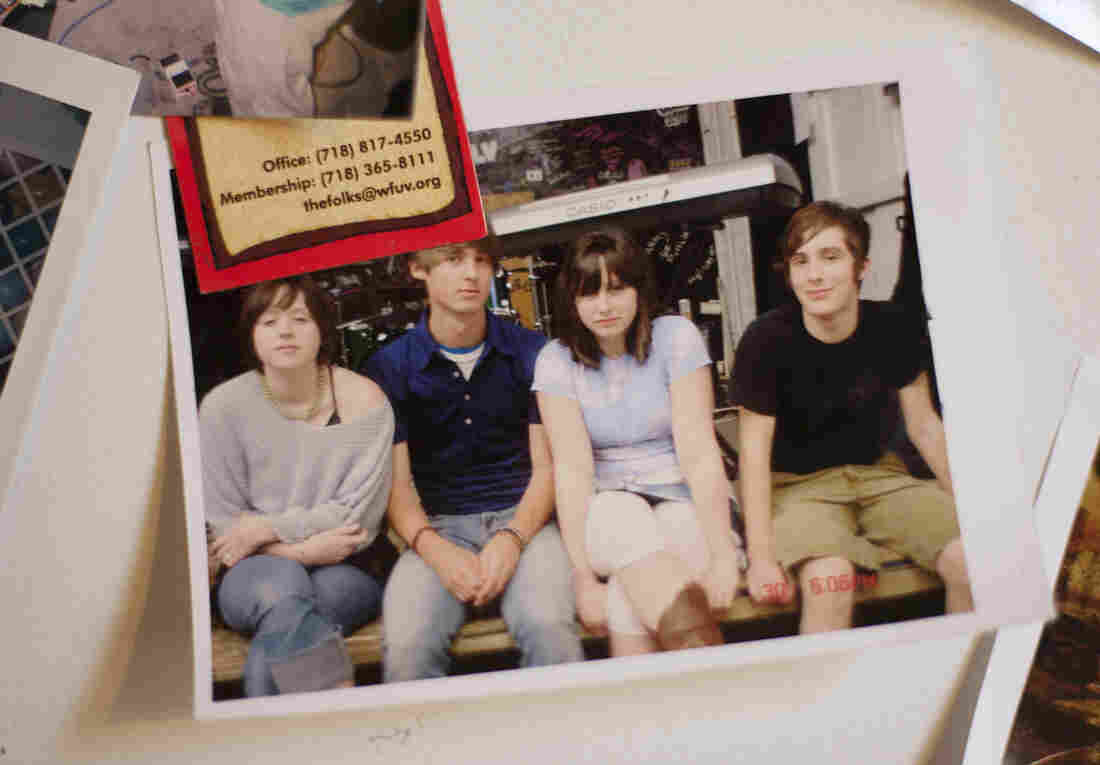 The Ackleys circa 2005, in a photo that now hangs on the Crutchfield sisters' refrigerator. Left to right: Allison Crutchfield, Michael McClellan, Katie Crutchfield, Carter Wilson. Will Figg for NPR hide caption

Passion kept The Ackleys running for three years, until college scattered them to different cities and they split up. Tracy Crutchfield hoped her daughters would focus on school after that. But after a few semesters, she says, it was clear the girls still had music on the brain.

"We sat 'em both down and said, 'If this is what you want to do — if you don't want to go to school, and you want to pursue your music and work — that's fine,'" she says. "'But it's gonna be something you're gonna have to really embrace.'"

The twins assembled a new band, P.S. Eliot, and hit the ground running: touring relentlessly, releasing records as fast as they could crank them out. They found a following — small but loyal crowds who came out to see them all over the country. Then, one day in January 2011, on the eve of her 22nd birthday, Katie got in her car and headed South. She was alone.

"I was in this sort of perfect storm of emotion," Katie says.

She'd gone through a couple of bad breakups that year; she was between jobs. Allison had left home and moved to Tennessee, where she was taking classes and working on songs of her own. P.S. Eliot was winding down. Katie felt lost.

"I was sort of like, this is my chance to say all of these things that I'm feeling," she says. "I've been making all sort of these clumsy life decisions and not really getting anywhere good in my life."

She drove to the family's vacation home, an isolated lake house on nearby Waxahatchee Creek. Almost immediately, it started snowing — and snowing and snowing. It was a blizzard, worse than anything the area had seen in decades. Stranded in the empty house, Katie grabbed her acoustic guitar, set up in front of an old eight-track recorder and got to work.

Eleven songs were born during that snowbound week, as was a new persona. Katie is matter-of-fact about adopting the Waxahatchee moniker: "It's the name of a place that I love." Early last year, she released those rough home recordings as an album called American Weekend. Lindsay Zoladz, a staff writer for Pitchfork, says she was captivated on first listen.

"She says, 'I'll wonder what you're doing, but I won't call,' " Zoladz says, referring to a stinger line from the song "Grass Stain." "That's such a theme running throughout. There is this level of intimacy with the listener, where she's telling you things that she can't even tell the people in her life."

Zoladz says that for her, American Weekend evokes a voice calling out "from the bottom of a well," its owner doubtful anyone out there is listening. But the album did find an audience, moving first by word of mouth and then gaining steam in the music press. A few prominent critics nodded to it in their 2012 year-end roundups, and chatter mounted about how the artist would follow up such a bold, out-of-nowhere debut. Katie was ready for them.

Cerulean Salt, released in March, is a home-brewed creation like its predecessor. But the differences are clear from the opening seconds: The recording is cleaner, the guitars dirtier, Katie's voice a confident lead instrument rather than an echoing distress call.

"A lot of the songs were so loose when we first started working on them," Katie says. "I didn't even know what I wanted, and then Keith and I worked on them together, and he sort of helped me figure a lot of them out."

Keith Spencer is one of the housemates and Katie's boyfriend; the two of them worked together to arrange the new songs for a band. Their friend Kyle Gilbride, who is Allison's boyfriend, was their engineer.

Allison, who guests on the album as well, says she's been listening closely to the finished product and can hear the focus of Katie's songs starting to shift. Cerulean Salt, she says, isn't a breakup record.

"For me, it's a lot about family and about our childhood and us growing up," Allison says. "When I listen to what she writes, I feel like I instantly know what she's talking about. I can connect with it in a way that a lot of people can't, because she's actually talking about things that I have experienced with her."

Katie says she hopes to find something universal in those specific details.

And whatever Katie Crutchfield is writing about, she'll probably find a way to keep living the way she and her sister grew up: with a community of musical friends and a basement, where they can be as honest — and as loud — as they want.