Accessibility links
Remembering The Multidimensional Music Of Bobby 'Blue' Bland : The Record Bland's music is the kind that can school anyone about the incomprehensible depths of love, the importance of dignity and the promise of the kind of good life that really might be within reach. 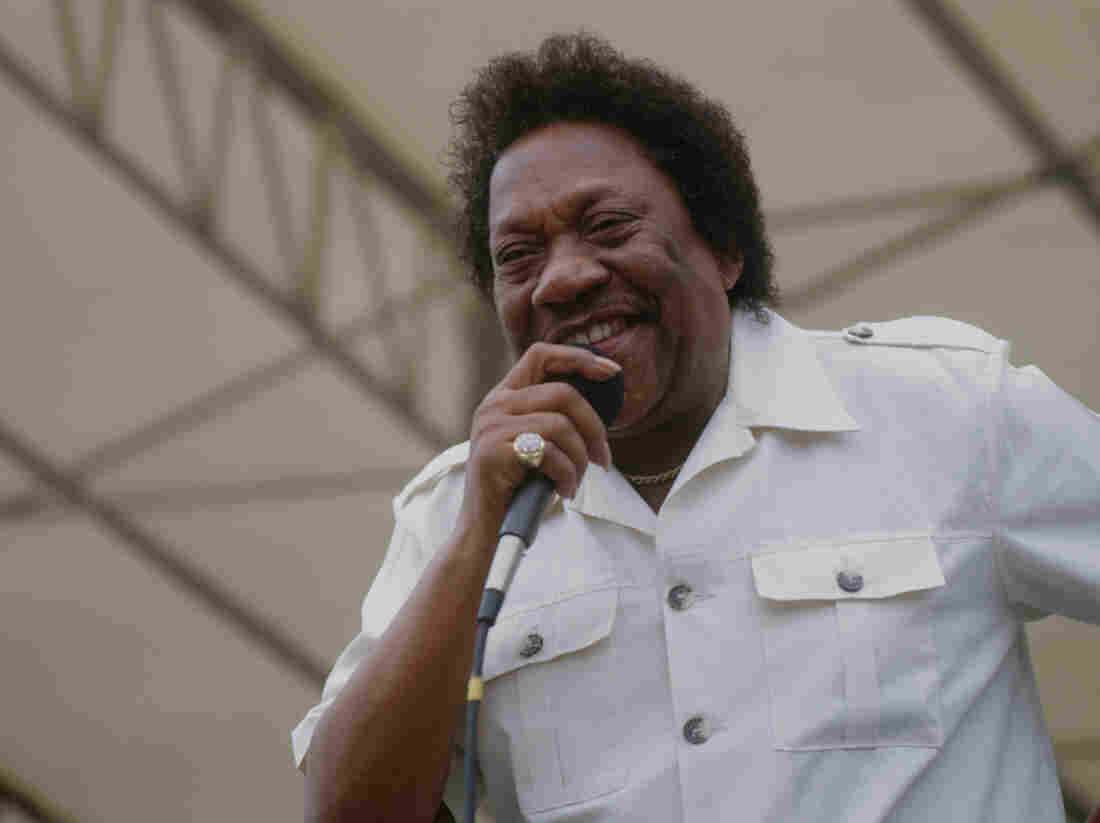 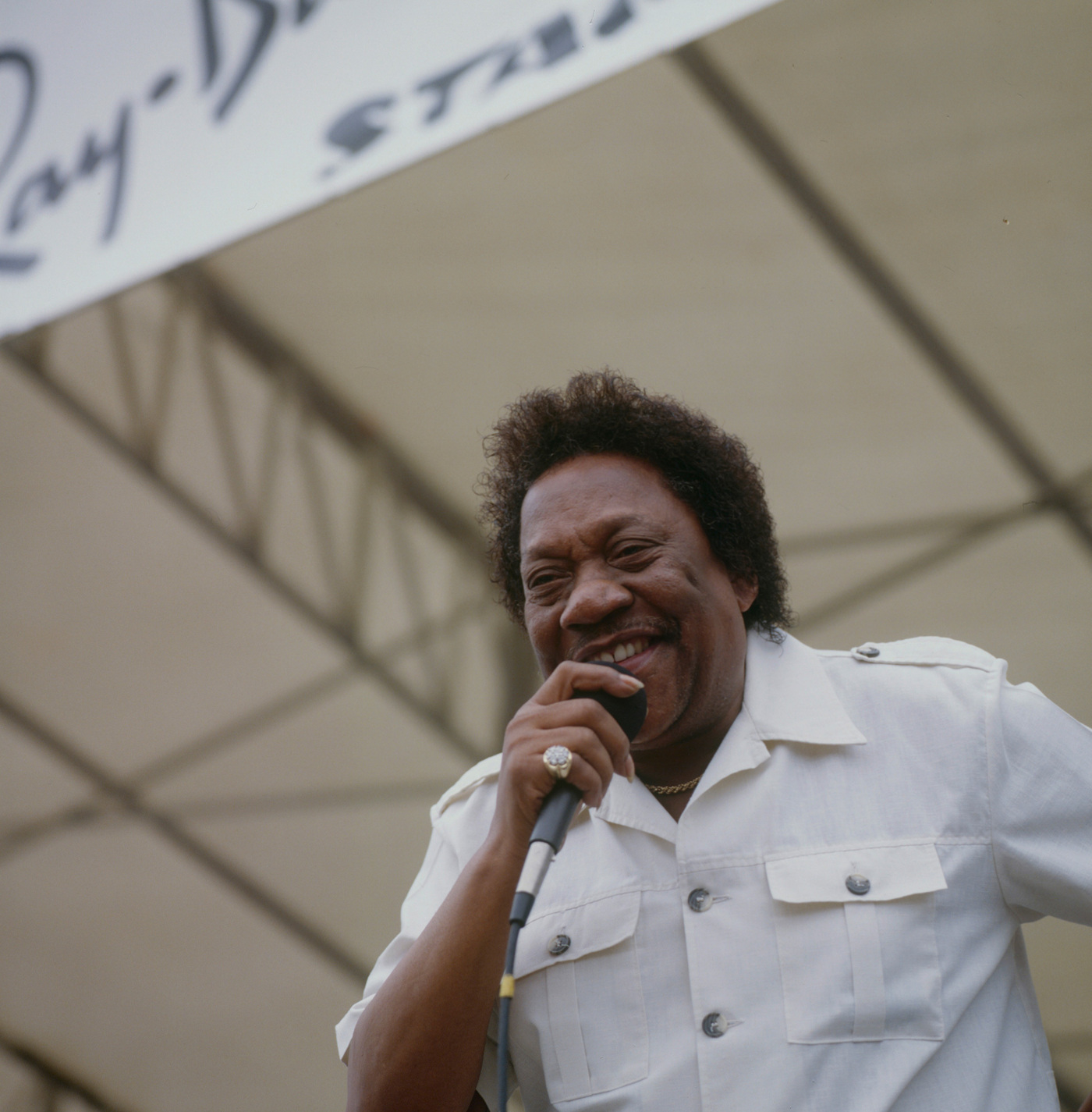 Bobby "Blue" Bland performs on stage at the New Orleans Jazz and Heritage Festival in New Orleans, in 1989.

Bobby "Blue" Bland was known as the Frank Sinatra of the blues. He smoothed out Southern soul with the elegance of jazz and big-band music, sparked it with elements of country and pop, and influenced musicians like Stevie Wonder and Ray Charles. The singer and guitarist is credited with modernizing the sound of the blues, but he never got mainstream attention from blues-loving British rock stars who'd invite B.B. King or Muddy Waters onstage. Still, his achievements were astonishing, as was his rise from rural Tennessee, where he was born Robert Calvin Brooks, dropped out of the third grade and moved on to Memphis' Beale Street, a veritable backbone of the blues.

Bland died Sunday at his home in Memphis, after a long illness, surrounded by his relatives. He was 83 years old. You can hear Neda Ulaby's remembrance as it aired on All Things Considered at the audio link, and read Ann Powers' appreciation of him below.

I spent many late nights poring over the stash of albums I'd acquired with my employee discount, from the early rural stuff that evoked dusty Southern roads I'd never seen, to the guitar-heavy meltdowns I recognized as the source of much classic rock. I'd always end up back with Bland, however, listening to his heavy emotional croon while contemplating the persona that made him such a powerful spokesmen for the blues as a music of African-American modernity — of migration, aspiration and the kind of transcendence that comes from finding beauty in the small triumphs of a difficult life.

The covers told the tale through the image of a man who was both earthy and sophisticated. There was Call on Me, from '63, showing the pompadoured Bland relaxing in front of four telephones, a gold watch marking time on his wrist and a cigarette dripping ash between his fingers, as four pretty women with receivers to their ears — one in each corner of the album sleeve — sat awaiting his response. There were the '80s Malaco sides, with Bland in a tux, welcoming listeners into the kind of whiskey-and-cards club you find just off the beaten track in any Southern city. There was Spotlighting the Man, which showed Bland onstage in full gospel sweat, his head bowed as he squalled and murmured messages of love and survival.

Most of all, there was Two Steps From the Blues — the brilliant '61 release that sounds like the very transitions African-American culture made in the mid-20th century: from the country to the city, from gospel to soul, from the cruelties of the Jim Crow South to the hopeful energy of city life all around the country. On that album cover, Bland stands on the steps of an ultra-chic ranch house in sunglasses and casual clothes, a coat slung over his shoulder. He's about to go in and face ... what? A woman with whom he can't quite come to terms? A domestic life that feels both substantial and confining? A chance to fulfill an American dream that he's not sure he even wants? That photograph showed me how the blues could connect to my own young life — to the process of becoming an adult and claiming one's place in a constantly changing world.

The music within those albums also spoke powerfully about transitions and the far-reaching soul of African-American music. Bland first learned to sing in the church, and his titanic squall was that of a gospel highway preacher. But he could also insinuate like Nat "King" Cole and pour out his tears with the gentleness and conviction of proto-R&B singers like Billy Eckstine and Brook Benton. Bland's melancholic, demonstrative yet carefully stylized singing style also connected to the country music of his time, another realm where stories of home and the heart connected to larger themes of social mobility and economic struggle.

For the mostly African-American audience that supported Bland for much of his career, songs like "I Pity the Fool," "Ain't No Love in the Heart of the City" and the spiritual shout "Farther Up the Road" captured the joy and sorrow of life with both immediacy and complexity. Bland's multidimensional music became a blueprint for generations of R&B singers, and more recently, a grounding element for hip-hop artists like Kanye West and Drake. It's easy to imagine these young stars as kids, watching their mothers dress up for a night out while the grave, reassuring sound of Bland's singing drifted through the house. Bland's music is the kind that can school anyone about the incomprehensible depths of love, the importance of dignity and the promise of the kind of good life that really might be within reach.