Accessibility links
A Music Festival Grows In The Rainforest : The Record Staged spectacularly between a beach and a rainforest mountain peak in Malaysian Borneo, the festival grows its local music scene and tourism industry, while also raising consciousness — along with, in this case, some uncomfortable questions — about its environmental stewardship.

A Music Festival Grows In The Rainforest

A Music Festival Grows In The Rainforest 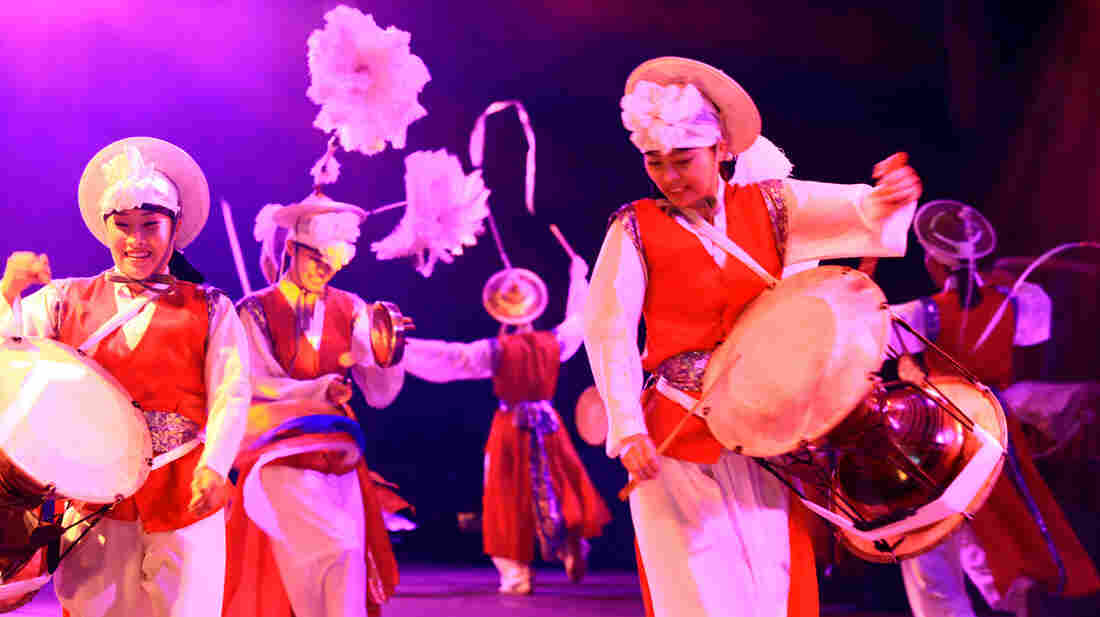 Palsandae, a South Korean troupe, whose wild, very loud music is at times not far removed from the ecstatic free-playing of Sun Ra's Arkestra or the Art Ensemble of Chicago. Leslie Liew/Courtesy of the photographer hide caption 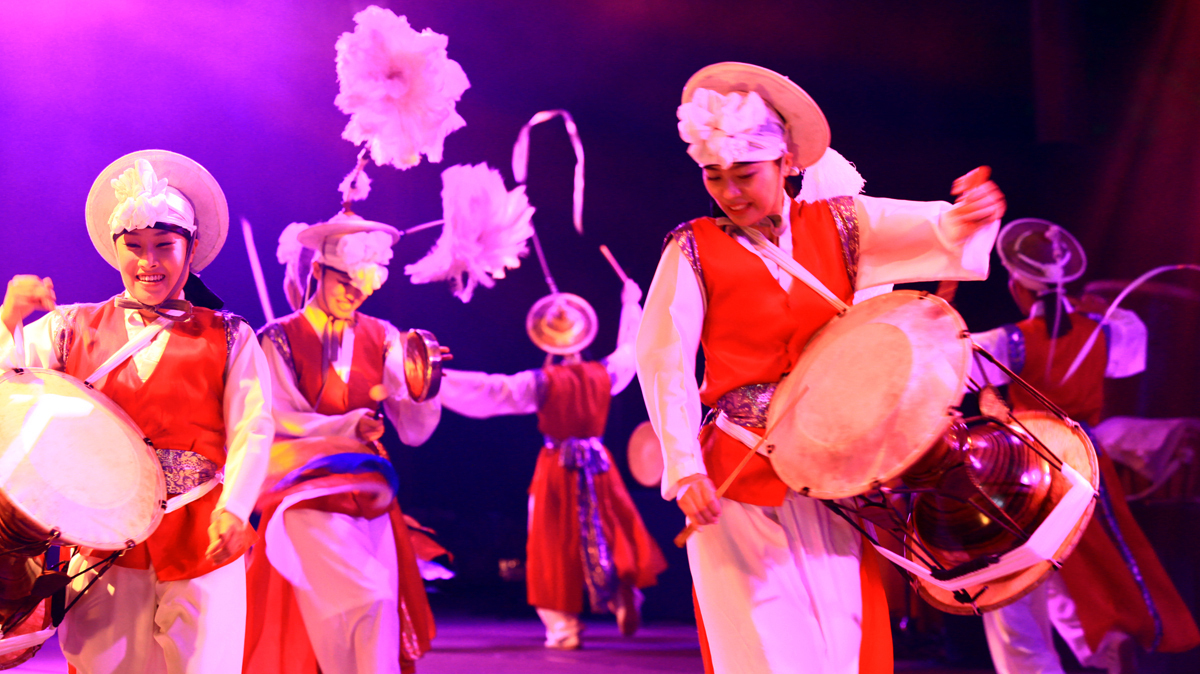 Palsandae, a South Korean troupe, whose wild, very loud music is at times not far removed from the ecstatic free-playing of Sun Ra's Arkestra or the Art Ensemble of Chicago.

Leslie Liew/Courtesy of the photographer

The international summer festival circuit is full of contenders, celebrating cultures and subcultures while hustling for global vacation dollars. For musicians, festivals mean exposure, a paycheck and a rolling party of peers. For communities, they're a revenue engine and self-promotion platform. For music-hungry fans, they're vacation anchors, or vacations unto themselves.

The menu has exploded in recent years, from veteran post-Woodstock pop feasts like Glastonbury and Roskilde to more specialized events like Sonar (highbrow EDM) and Kill-Town Death Fest (metal, duh) to more ethnically-minded gatherings like Finland's Kaustinen Folk Festival, which look to advance regional culture. The Rainforest World Music Festival, staged spectacularly between a beach and a rainforest mountain peak in the state of Sarawak in Malaysian Borneo, is an object lesson in the latter. The 16th annual event, which concluded its three-day run on the last day of June, showed how a region can use a festival to grow its local music scene and tourism industry, while also raising consciousness — along with, in this case, some uncomfortable questions — about its environmental stewardship.

A nominally Muslim country defined by a mix of Chinese, Indian and native cultures and the warmth of its people, Malaysia has always had a bit of an image problem. At one time it was local tribal headhunting practices; more recently it's been political unrest in Sabah and a checkered environmental scorecard. In part, perhaps, to help counter this, a group of international concert promoters and journalists were brought in for a world music business conference and expo in nearby Kuching prior to the festival. [Full disclosure: I was among the journalists invited to speak.]

The upshot of the conference was that the country's traditional music scene is rich creatively, but still in its infancy professionally. The festival itself bore this out: many of its most stirring moments came from local musicians relegated to brief opening slots and afternoon workshop performances. There were the hypnotic hammered bamboo zithers (called "gongs") built and played by Arthur Gorman and Madeeh, a group from a jungle-based Bidayuh tribal longhouse community about 65 kilometers from Kuching. There were soulful performances on the sape, the ornate lute that is the icon of Malaysian traditional music, by Matthew Ngau and Maya Green and a remarkable bit of Kayan nose-flute playing by the 71-year-old Juk Wan Emang. (When asked by a waggish Brit journalist why he doesn't just play the flute with his mouth, the master musician replied through a translator "because anyone can do that. Only someone special can play with their nose.")

Making music originally designed for healing ceremonies, religious rituals and/or dance performances, most of these players hadn't developed enough repertoire to fill a full festival set. Those who had faced other challenges. Rhythm in Bronze, based in peninsular Malaysia in the capital of Kuala Lumpur, perform modern work written for Malaysian gamelan, which is distinct from the Indonesian variety in tuning, instruments and playing style. Because the group travels with 13 performers and 800 kilograms of unique gongs, metallophones, bonang and kenang pots, and gendang drums, international touring costs are prohibitive; it took them years just to make it across the South China Sea to the Rainforest Festival. A few fans of traditional Indonesian gamelan were skeptical of the group's populist take on the classical form. But their performance was a festival highlight, meditative and exuberant by turns, with subtle choreography, charming group dynamics and intoxicating tonalities. Heard through a huge sound system, the music was magnificent.

Other festival highlights came via international acts, none of them especially big stars. Lafayette, La.'s Pine Leaf Boys played Cajun music spiked with Memphis soul. Dizu Plaatjies and the Ibuyambo Ensemble played the sort of South African tribal pop that inspired Paul Simon's Graceland, and at one point delivered a heartfelt tribute to the ailing Nelson Mandela. Spiritual Seasons, from Ukraine, inexplicably triggered an outbreak of rumba-style line-dancing in the crowd. The level of audience participation was remarkable by U.S. standards (outside of EDM festivals). So was the relative sobriety. Though you could find thuoc, the local rice liquor, if you looked hard among the food stalls, festival management nixed it in the main food courts due to past attendee overindulgence. Wine and beer (the latter from omnipresent stalls courtesy of festival sponsor Heineken) were plentiful, but while more than a few tipsy fans wove their way towards the gate at the end of each night, there was none of the public drunkenness that's common at American festivals. And given Malaysia's notorious drug laws (including a mandatory death penalty for drug trafficking), there were zero signs of marijuana or anything else. And, yes, in case you were wondering: it was very hot — but, humidity notwithstanding, no worse than what fans at Bonnaroo and Coachella contend with.

For me, the weekend's most exhilarating performance was by Palsandae, a South Korean ensemble rooted in a tradition of traveling music and dance troupes. Dating back to the '60s, and updating far older styles of farm and street music, these nearly all-female pungmul ensembles would roll into a town, set up a tent and present their circus-like shows. Palsandae's version involves acrobatic chaesang sogo dancing, hats with ribboned whirlygigs and deliciously cacophonous music made with double-headed janggo drums, clattering hand-held kkwaenggwari gongs and the braying piri, a small bamboo oboe. Kim Woon-Tae, the group's shamanic male leader who grew up traveling with a pungmul troupe, has a jazz background as well, and it shows: their performances have elements of site-specific improvisation, and at times the wild, very loud music isn't far removed from the ecstatic free-playing of Sun Ra's Arkestra or the Art Ensemble of Chicago.

There's an educational component to the festival, too. The setting is the Sarawak Cultural Village, a sprawling assortment of tribal communal longhouses that are still common throughout the jungle interior, albeit with modern conveniences like electrical generators, appliances, computers and power tools. This is where artists held afternoon workshops, which gave context to the music and which occasionally became dance parties themselves.

One thing missing, strangely, was any real discussion about rainforest deforestation. Sure, you can argue politics are a buzzkill at a music festival. But promoting the splendor of the threatened rainforest and the tribal cultures it sustains is a political act by default, and one hoped for more than platitudes about man being the caretaker of Mother Earth. I had trouble even finding a recycling bin, and in numerous press conferences, government officials mostly skirted questions about the logging industry. Meanwhile, smoke haze attributed to illegal land-clearing rainforest fires in Indonesia (in which Malaysian companies are suspected of being complicit) made for choking air quality and flight cancellations prior to the festival. And just days after it ended, journalist Clare Rewcastle Brown, founder of Radio Free Sarawak and a sharp critic of the region's logging practices, was denied entry into the country.

Travelling in this dazzling region, you quickly realize the stakes. I spent a long night excavating freshly-laid sea turtle eggs on the beach of Talang-Talang island for the protective hatchery at Sarawak Forestry's turtle conservation program. I visited Bako National Park, accessible only by boat, and spent hours watching proboscis monkeys eating and playing in the rainforest canopy, amidst myriad other wildlife. It's thrilling that Malaysia has a world-class music festival to highlight the beauty of the rainforest and its culture. Hopefully the nation's environmental policies preserve them.