Accessibility links
Jay-Z's 'Magna Carta' Is A Fait Accompli : The Record It's not right, but it's okay, because even on cruise control, Jay-Z is revolutionary by his very existence. 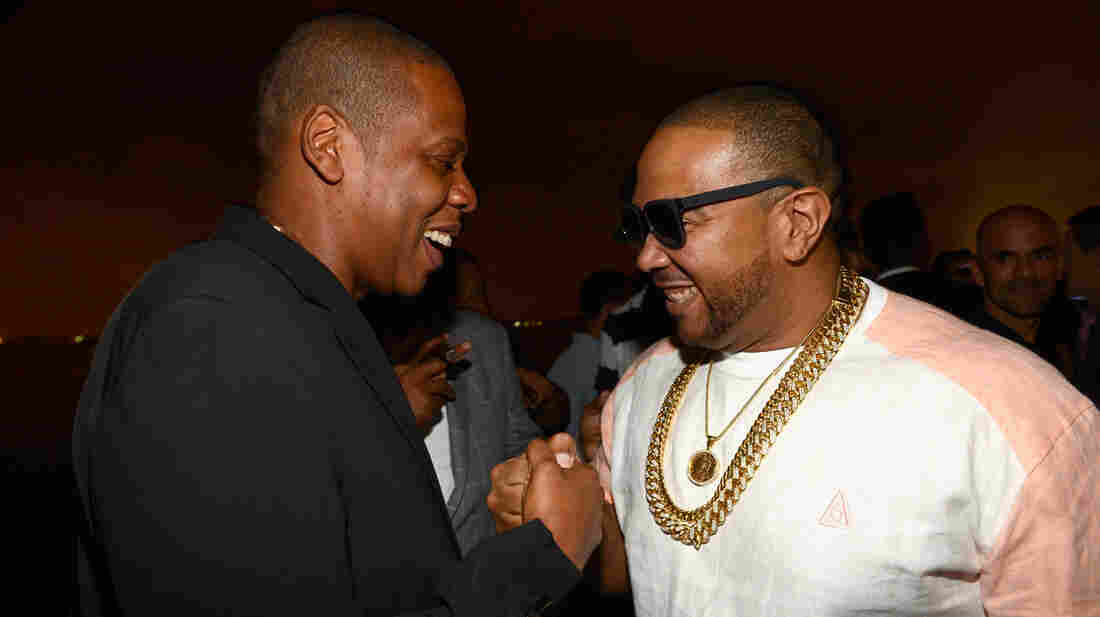 Jay-Z (left) and Timbaland (who produced most of the album) at the release party for Magna Carta Holy Grail July 3 in Brooklyn. Kevin Mazur/Getty Images for Samsung hide caption 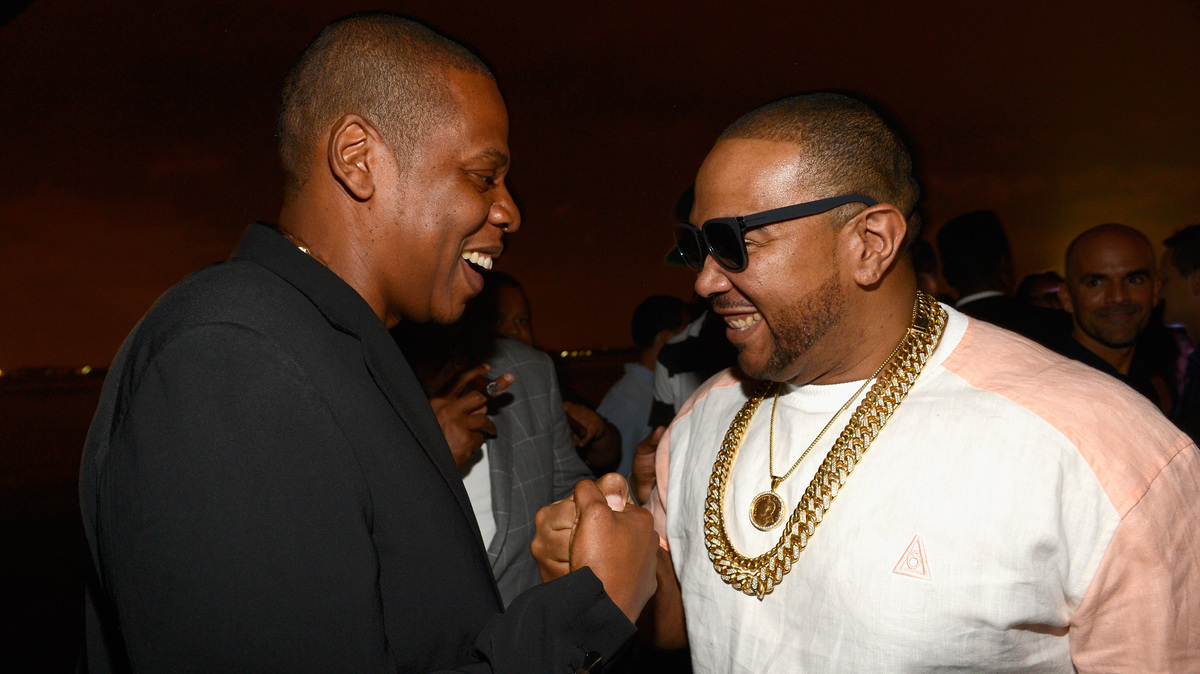 Jay-Z (left) and Timbaland (who produced most of the album) at the release party for Magna Carta Holy Grail July 3 in Brooklyn.

Magna Carta Holy Grail, Jay-Z's 12th solo album, begins with pure superhero heraldry. Though the first track, "Holy Grail," cedes much to Justin Timberlake's semi-pained rumination where the singer equates the love/hate game of celebrity to an unhealthy romantic relationship and mythical objects, the song itself is bombastic and majestic, playing like the official announcement to their coming Legends of the Summer tour. It's a victory lap for a fait accompli.

It's a bit of a bait-and-switch, though. Musically, the album is mostly enjoyable and wholly serviceable, but it's also safe and unadventurous. Aside from "Holy Grail," nothing hits like "N- - - -s In Paris" from 2011's Watch the Throne with Kanye West, or "Empire State of Mind" from The Blueprint 3, his last solo release. It mostly jams without banging; when it does bang, it does so quickly — two of the hardest numbers, "Versus" and "Beach Is Better," call it quits in under one minute; a third segues into something else halfway. Despite being aided by Timbaland — who produced most of the album, as well as Timberlake's recent, palette-expanding The 20/20 Experience — Jay-Z is not willing to take the sonic chances that he's taken in the past (see: the Annie sample), much less go all digital Cuisinart a la Kanye West's Yeezus.

It's not right, but it's OK, because even on cruise control, Jay-Z is revolutionary by his very existence. The fact that he's a former crack dealer from the projects who now has a mountain of clean money that you can see from space and a business portfolio that could survive global warming is the axis on which Magna Carta Holy Grail spins: "New money, they lookin' down on me," he raps on "Somewhere in America." "Blue bloods / They tryna clown on me / You could turn up your nose, high society / Never gonna turn down the homie / Knock-knock / I'm at your neighbor house / Straight cash, I bought your neighbor out."

On the fine arts-heavy "Picasso Baby," Jay refers to Basquiat at least three times by three names, once saying "I'm the new Jean-Michel." He begins the song claiming, "I just want a Picasso" and ends saying "I'm the modern day Pablo Picasso, baby." Taken linearly, it's a mess of ego. But comprehensively, it's all insatiable radiant child cubism — poignant signifiers of ghetto brashness juxtaposed with impressionistic images of intergenerational wealth creating the collage of an identity that's yearning to be accepted, but unwilling to be acceptable.

There's a push and tug of success and regret through the album, which is nothing Jay-Z hasn't said before. On 1997's insightfully paranoid "Lucky Me," he lamented that he "can't even enjoy myself at a party unless / I'm on the dancefloor [wearing a] hot-ass [bulletproof] vest" — 10 years later on "Success" he complained, "Truth be told, I had more fun when I was piss-poor / I'm pissed off / Is this what success all about?" He's spent the bulk of his career mining these themes, while positioning personal achievement through capitalism as a subversive act — fine-tuning a narrative where he's the protagonist fighting the righteous fight against crabs in a bucket and a racist society. The players and circumstances may change — here, he takes shots at Billboard magazine, the NFLPA, Scott Boras and Harry Belafonte (and, if you count the previously heard, vinyl-only bonus track, "Open Letter," uppity congressional members as well) — but his struggle remains. "Feds still lurking / They see I'm still putting work in / 'Cause somewhere in America, Miley Cyrus is still twerking," he raps, summing up his themes of class, race and drugs in under 20 words.

On the surface, Cyrus is an all-American girl who name-dropped him in 2009's "Party in the U.S.A.," but later admitted she'd never heard one of his songs — yet today is famously fascinated by base signifiers of modern black culture such as booty-popping. She's also a celebrity white girl, and celebrity white girls are rap shorthand for cocaine, so there's a wink acknowledging that the influence of an uber-rich and famous and unapologetic black man is more discomforting to society than a kinda-rich black guy selling drugs. (On the soundtrack to The Great Gatsby, Jay rapped: "Took that Taylor Swift to a hundred-f- - - in' million," a line which is succinctly intrusive and transgressive.) It's definitely not the type of stuff one raps about when concerned with the reactions of corporate sponsors. If Kurt Cobain can appear on the cover of Rolling Stone with a T-shirt that reads "Corporate Magazines Still Suck," then Jay-Z can appropriate "Smells Like Teen Spirit" on an album that's all but underwritten by a multinational conglomerate.

By releasing the lyrics to the record before its release, Jay makes a compelling argument for himself as spoken word artist. On paper, the words fall flat, but on beat, simple lines like "I wonder if you fools realize how far you are / You're nowhere in my rear mirror," from "Versus," are pregnant with equanimous menace, internal rhymes, ominous pauses and poetic mispronunciations. He may be getting too old to be the best rapper alive, but it's a fool's argument at this point that he's not the greatest rapper of all time. Early in his career, he boasted that he changes styles every two rhymes and that's pretty much held true. Here, he takes flows from Juvenile and M.I.A. without ever sounding like anyone but himself.

Even when he samples the Notorious B.I.G. — grunts and all — on "Jay Z Blue," he manages to channel the fallen MC's death-filled pathos into an open-heart admission of sorrow that has a lineage in earlier Jay-Z songs like "Regrets" and "You Must Love Me." The difference here is that Jay is no longer processing the past, but pre-apologizing to his 18-month old daughter and longing to get high while fearing the worst outcomes for his marriage: "Lookin' in your eyes is like a mirror / Have to face my fears / Cheer up / Why can't you just be happy / Without these back-and-forth thoughts? / You too much like your daddy."

"Just let me be great," says Jay on "F.U.T.W." and it's easily the most insincere request on the album. No one can "let" Jay-Z be great. Though he continues to compare himself to contemporary icons, it's past time that they should be comparing themselves to him. He refers to himself as Magic Johnson and Kareem Abdul-Jabbar; but LeBron James and Dwyane Wade would love to be referred to as the Jay-Z of basketball. No hip-hop artist has ever made an album this strong 17 years removed from a debut. Despite being in the autumn of his recording career, Jay-Z remains a commanding force who's revered by the public, respected by those too young to have experienced him in his prime and feared by anyone going against him on the boards. Let him be great? Good luck stopping him.