Accessibility links
Watch The Civil Wars Live Up To Their Name In A Behind-The-Scenes Video : The Record The personal differences that surfaced during the studio sessions of the spellbinding country duo The Civil Wars resulted in a canceled tour, a dissolved partnership and a second album that crackles with tension. 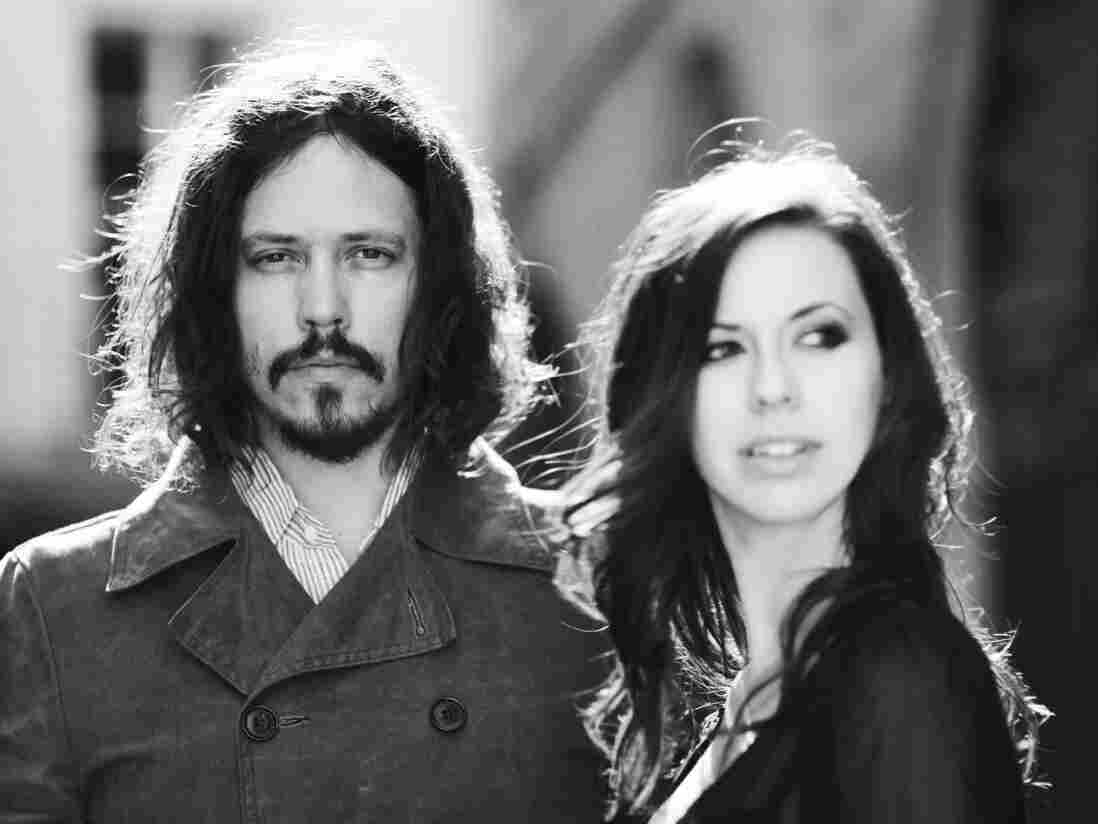 John Paul White (left) and Joy Williams of The Civil Wars. The duo's second album will be released on August 6. Allister Ann/Courtesy of the artist hide caption 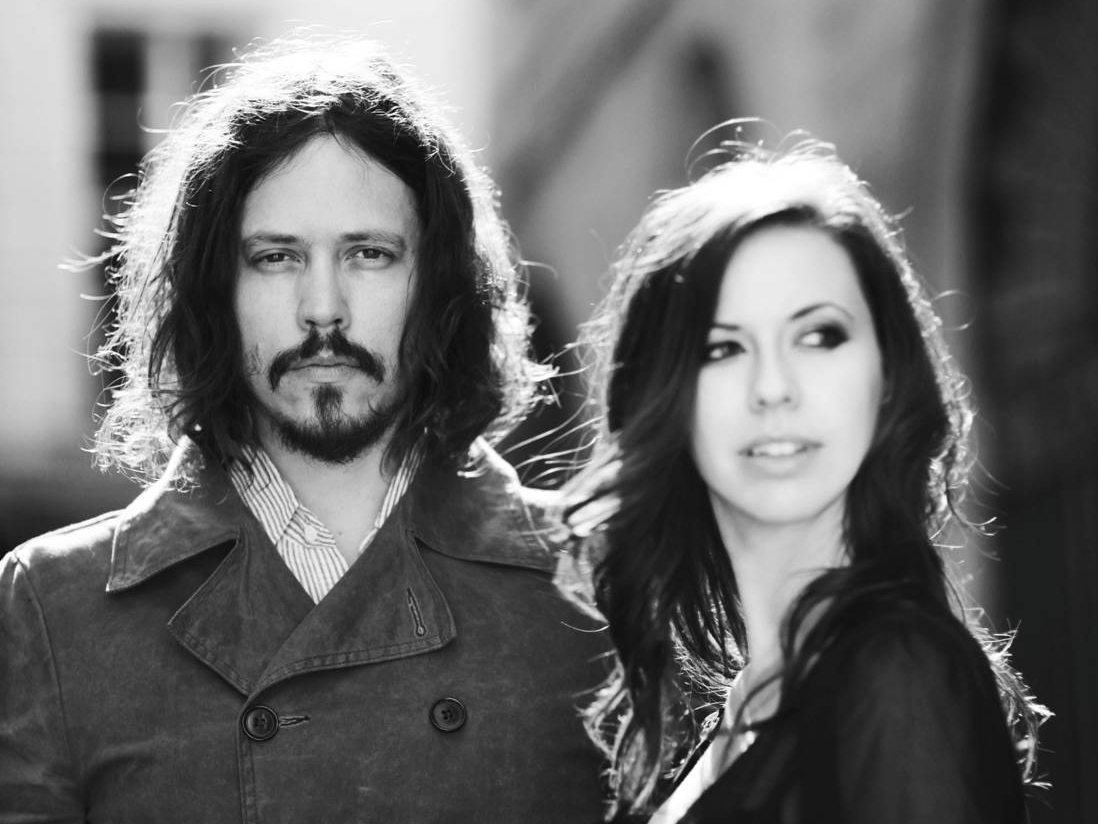 John Paul White (left) and Joy Williams of The Civil Wars. The duo's second album will be released on August 6.

The Civil Wars are a duo whose interchanges, onstage and on the 2010 debut album Barton Hollow, fascinated fans with their magnetic pull and expressiveness. Joy Williams and John Paul White, singer-songwriters whose own separate careers had stalled at different crossroads, came together by accident and quickly became soul mates. Produced by Nashville veteran Charlie Peacock, Barton Hollow rocketed up the iTunes and Billboard charts on the strength of Internet fandom and the pair's spellbinding live performances. Barton Hollow went gold and won two Grammy Awards, for Best Country Duo/Group Performance and Best Folk Album.

Continued success seemed inevitable for The Civil Wars, especially after Taylor Swift took them up as collaborators on a song for the Hunger Games soundtrack. (That song, "Safe & Sound," also won a Grammy.) Many more accolades followed, but in the midst of a European tour, long-simmering problems erupted between Williams and White, and the band went on indefinite hiatus.

Before that tour, they'd started to make their second album, partnering with Peacock again. Latent differences, kept at bay by the force of their musical connection and the excitement of their rapid rise, soon emerged. "I picked up on the tension right from the start of the recording in September 2012," Peacock wrote in an email. (While in the studio, the duo made a behind-the-scenes video, viewable here for the first time, which documents that tension.) "I wrote it off as lingering fatigue, and a widening gap between a northerner worker bee full of analysis, inspiration and work ethic (Joy), and the poster child for southern rock mythology (JP) — where it's always thought best to wait on the inspiration with the least amount of talking about music.

"Given the tension, I became the interpreter, helping to navigate the differing styles of working, and also taking on the needed role of ordering the work at hand," he continued. "And, most importantly, I like to think I was encouraging to both of them in their very different ways of working. I feel like I'm rambling a bit, so maybe in short, this record revealed much more of what they did NOT have in common, in spite of their incredible symbiotic musicality. I felt like my job was to always be in record, capture everything, and pray to recognize greatness when I heard it."

Despite dissolving The Civil Wars (for now, at least), Williams and White diligently worked to complete the album. Now it's about to be released eponymously. Promotion is tricky when a project's two main players aren't talking to each other — a situation Williams revealed in an Associated Press interview this week. One thing the no-longer-perfect partners did was make a music video for the song, "The One That Got Away," which includes shots that also appear in the behind-the-scenes video.

Working with the Southern production company 1504 Pictures, Williams and White (and their new major-label partner, Columbia Records) have shaped a document that speaks as much in song fragments and glimpses of downtime as it does in the abbreviated interviews Williams and White separately provide. Williams is more forthcoming, focusing on the idea that great art can arise from conflict. White, a cooler character, talks about enjoying playing his guitar and deliberately keeping the songs' meanings vague. Fans can draw their own conclusions from scenes that show the singers barely acknowledging each other most of the time — but then locking into that undeniable empathetic groove when the music takes over.

"There were moments when John Paul would pick up a guitar and he and Joy would transport to a different place," director Mark Slagle of 1504 Pictures said in an email. "You can see it when John Paul plays [the new song] 'I Had Me A Girl' in the control room and Joy starts moving with the melody. There was definitely a creative push and pull, but watching them grow a song from nothing, giving and taking, was incredibly inspiring."

The duo's in-studio process made for an album that's somehow both raw and carefully modulated, a kind of musical Rashomon that reflects on devastating events from varied perspectives that both intertwine and contradict each other. Williams says that the story of the band is all there in the recording. It's easy to sink into gossip from that point — "I wish you were the one that got away" is certainly a suggestive lyric — but the music, partially revealed here, demands more.

"Honestly, me connecting the lyrics to the situation happened over time and not immediately," says Peacock, who's only behind the scenes in the behind-the-scenes video. "It really wasn't until they'd finished the bulk of their recording and gone off to Europe, and I was sitting with the tracks alone that I realized, 'Oh my, it's all here — they really aren't getting along!' In some sort of incredibly ironic twist, I suppose creating the music together was the best way to deal with it. They mostly kept their cool though. I co-wrote 'The One That Got Away' with them in the studio and I never had any sense that they were anything but respectful as co-creators, and from my perspective, really at the top of their game. Inside the process, I think they were both all about the art and nothing else."

Slagle and 1504 also put the art first, filming ways that complement the clear-as-a-mountain-river directness of The Civil Wars sound. "A lot of the emotion comes from the music itself, and we didn't want any tensions to overshadow the music. That said, we shot the interviews in a first-person format to create as direct a connection as possible between Joy, JP and fans."

Like The Civil Wars album itself, which will be released August 6, this short trip inside a troubled process leaves room for speculation, but steers the listener (or viewer) to put the powerful, rewarding music first. As for the duo's future, Peacock holds out hope.

"No question, people are going to be listening to this new music, and the two of them will go on to make more worthy music, even if they're apart," he wrote. "That said, my number one hope is forgiveness and reconciliation for the two of them. One of the most satisfying and uniquely human actions is the ability to forgive and receive forgiveness. It's sets the stage for a thousand do-overs. Like a lot of people, the two of them singing together is one do-over I'd pay big money to hear and see."