Accessibility links
Thundercat On Making Music Outside The Lines : The Record Session musician Stephen Bruner has played bass in other people's bands for more than a decade. He can play metal, R&B, hip-hop, jazz. With his second album, he's stepping to the front of the stage. 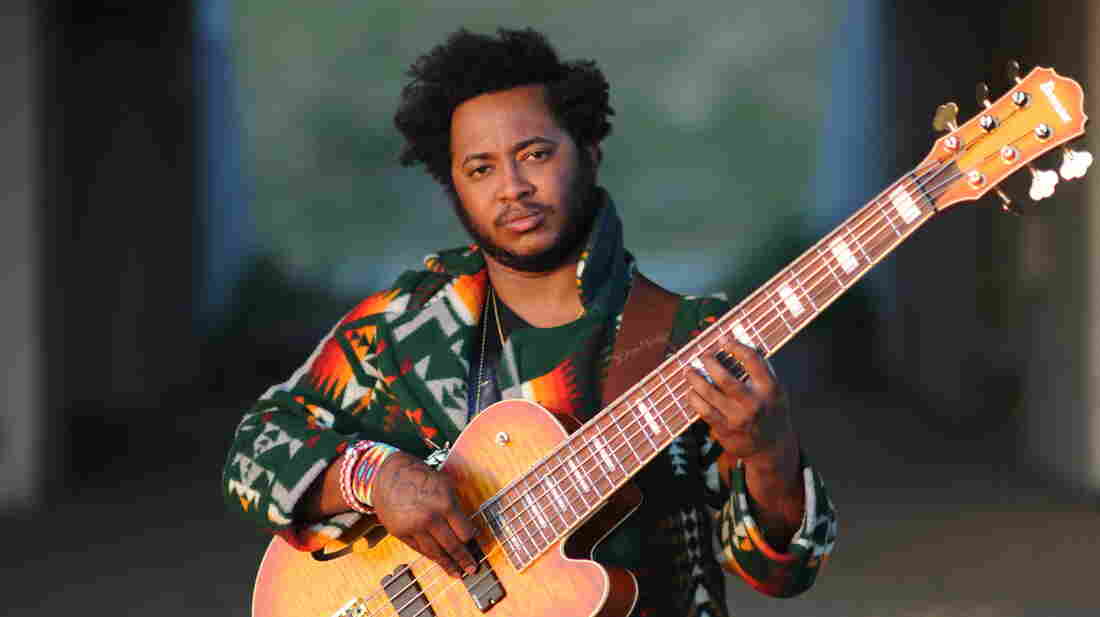 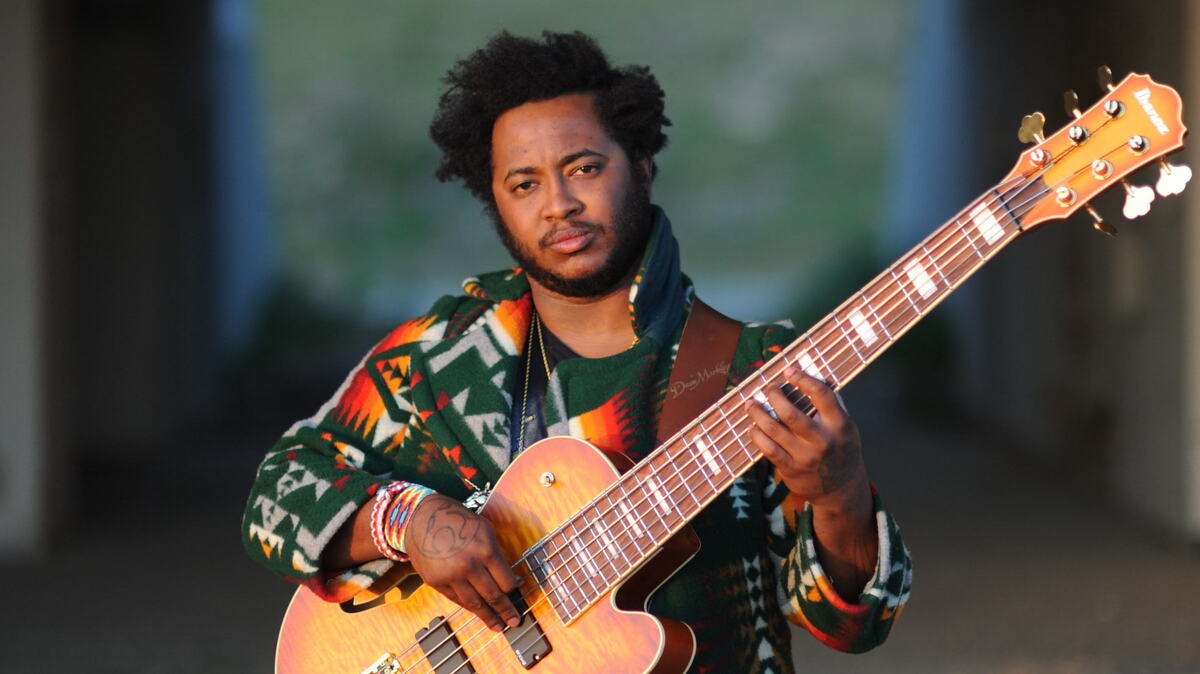 Session musician Stephen Bruner has played bass in other people's bands for more than a decade. He can play metal, R&B, hip-hop, jazz. And he's been folding all that into his own music, which he puts out under the name Thundercat.

Now, with his second album, he's stepping to the front of the stage.

Bruner knows everybody. He calls Robert Trujillo, who he replaced in the thrash band Suicidal Tendencies and who now plays bass for Metallica, his big uncle. It was as he was being introduced to the otherworldly soul singer Erykah Badu in a Los Angeles studio that Bruner, a little bit obsessed with the Thundercat cartoon, and usually wearing Thundercat T-shirts, got his stage name.

"I would be in the other room playing Xbox or something, you know, picking my nose," says Bruner, who was that day working with a group called Sa-Ra. "And I remember she asked — she was like, 'What does he do?' And Shafiq [Husayn, Sa-Ra's producer] was like, 'Oh, that's Thundercat.'" Nobody had ever called him that before.

"'That's Thundercat playing bass on all this stuff.' And she literally was like, 'Yup, you're coming with me.' That's one of my best friends." He calls her his ace.

In the mid-2000s he toured with original G-funk rapper Snoop Dogg. "It was so much fun," Thundercat says. "So much craziness. I would say it like: It was one of the biggest, blackest, bestest experiences I've ever had creatively, musically."

He was the youngest member of the band, and he got bagged on all the time. But, he says, every minute of it was amazing.

"I remember playing Billy Cobham's Total Eclipse for Snoop Dogg. I also played him Frank Zappa, Apostrophe. And I played him 'Saint Alfonzo's Pancake Breakfast.' Snoop was sitting there with a blunt in his mouth and just listening to Frank Zappa go off. I'm running around doing cartwheels in my boxers in Snoop's room, spazzing out. I'm like, 'Snoop wants to hang out, yeah!' He loved it. He was like, 'This is fly. This is some cool stuff.'"

Thundercat calls Snoop his uncle too. "He was actually one of the first people to call me when my album came out. Called me just singing 'Daylight.' Just straight out — 'Dayliiiight ... yeah, what up cuz?' I was like, 'Hey!'"

"Daylight" is a song from Thundercat's first album of his own, The Golden Age of Apocalypse, which he put out two years ago on Brainfeeder, a label with multi-genre focus run by electronic musician Flying Lotus. Lotus says he and Thundercat, who met just four years ago, are kindred spirits. The bass player was all over Lotus' 2010 album Cosmogramma, and especially present on the song "Mmmhmm," where Thundercat sings, too.

Lotus executive produced Thundercat's second album, and he's had a front row view of his growth from sideman to frontman. This has meant a change in standard operating procedure. "It was a real shock for him to start making sure people gonna turn up for rehearsals and stuff. He's the guy who doesn't even think about that." Lotus says he's watched Thundercat grow into his own skin and become the guy who thinks, "I'm the boss now. I've got to make sure everyone's tight."

And, Lotus says, he can hear the results. "It's such a huge progression, just in terms of musicianship, his singing, the workflow. It's a lot tighter — the album is tighter. He's been singing live so his voice is stronger. We didn't use any kind of pitch correction or anything with his voice."

One of the new songs, "Oh Sheit It's X," is about a New Year's party that went on for two days. I asked Thundercat if it's a true story. "Yeah. It absolutely is. That's a story that actually happened," he says.

Flying Lotus was out of town. "It was so epic," says Thundercat. "And if you ask Lotus, to this day, he will still get mad."

The song would have been perfect for Soul Train. The bass is rubbery and sticky and weighs a ton. Though the lyrics are practical — "My friends say, 'You should eat something'" — the sound is delirious, like a sugar high.

Lotus missed the party, but he's the one who pushed Thundercat to include the line in the song that goes "Oh, s---, I'm f---ed up." Thundercat comes from a Christian background, and he wasn't the only one expressing doubts about the lyric. The bassist's older brother, drummer Ronald Bruner Jr., told Lotus he was worried about that song.

"'You really gonna do that? You know Mom's gonna hear that. You know she ain't gonna like that,'" says Lotus, imitating Ronald. "I was like, 'Look look look. When people hear the song that's gonna be their favorite part of the whole thing.' He was like, 'Really? You think so?' I was like, 'Yes.'"

I asked Lotus if that's what executive producing means. "I am there to encourage him and discourage him," he says. There's a little more to it — sequencing, giving feedback and mixing. Lotus says it was easy to work with his friend. "There's no games. There's no games at all about the intensity and the passion that he has for it. Just give him a bunch of Red Bulls and some water. Maybe some water. And then some magic will happen."

And the new album, Apocalypse, isn't only funny songs about parties. "A Message For Austin / Praise the Lord / Enter the Void" is about jazz pianist Austin Peralta, who died suddenly of pneumonia when he was just 22. He was a dear friend of Thundercat and Flying Lotus, and his death stunned them both. Thundercat wrote the song and recorded a demo of it, but when they went to record it for the album, Lotus says neither of them could do their jobs.

"Every time he would try to record the vocals he told me he would think about Austin. You could just hear him falling apart every take that he did. I say, 'Alright, we'll take a break.' And we come back, he gets some courage and then he starts doing it and I can't do what I'm supposed to do. So it was like, 'Alright, you know what? We're just gonna have to try and make the demo vocals work.'"

One of the things Peralta and Thundercat had in common was a refusal to abide by the restrictions of genre. "Austin said this in an interview one time," says Thundercat. "He says, 'There's only good music and bad music, and the truth is it's for you to decide what's good and bad for you.'"

The very idea of making only one style of music is perplexing to Thundercat. He says people ask him about it sometimes. "'How are you doing all that?' And I'm like, 'What do you mean how am I doing all that?' It's what we're supposed to do. I'm connected to all of it in a very major way. It's all coming from here, you know?"

He's pointing at his heart when he says that. Thundercat says he grew up spoiled by hearing all the music he did — both his parents are musicians. So is his older brother. "I would be listening to Manhattan Transfer and Cream. Mahavishnu and Jan Hammer, Andraé Crouch — and there's gospel music," he says. "I would listen to all kinds of stuff. Joe Henderson and John Coltrane. Half of the time I wouldn't be playing video games to play them — I'd be playing them to listen to the music." He was in church groups and mentored by Reggie Andrews, a legendary teacher at Locke High School in Los Angeles.

All three bassists — Jaco Pastorius, Clarke and Miller — have also played all kinds of music: jazz, funk, rock, folk, fusion, pop and R&B. Thundercat feels a responsibility to remind people — musicians and listeners alike — of how much they miss if they don't stay open to everything. It was Clarke who long ago told him something about music that's stuck with him.

"What is it for? It's for me to give to people. Stanley Clarke told me one time that we're servants — that's what our duty is," he says. "This art is a service."