Accessibility links
Bruno Mars Is More Than Your Average Pop Star : The Record In a live arena show that trades in a well-schooled range of summertime-friendly pop, the hit-making machine known as Bruno Mars is one of our moment's most valuable historians of popular music.

Bruno Mars Is More Than Your Average Pop Star

Bruno Mars Is More Than Your Average Pop Star 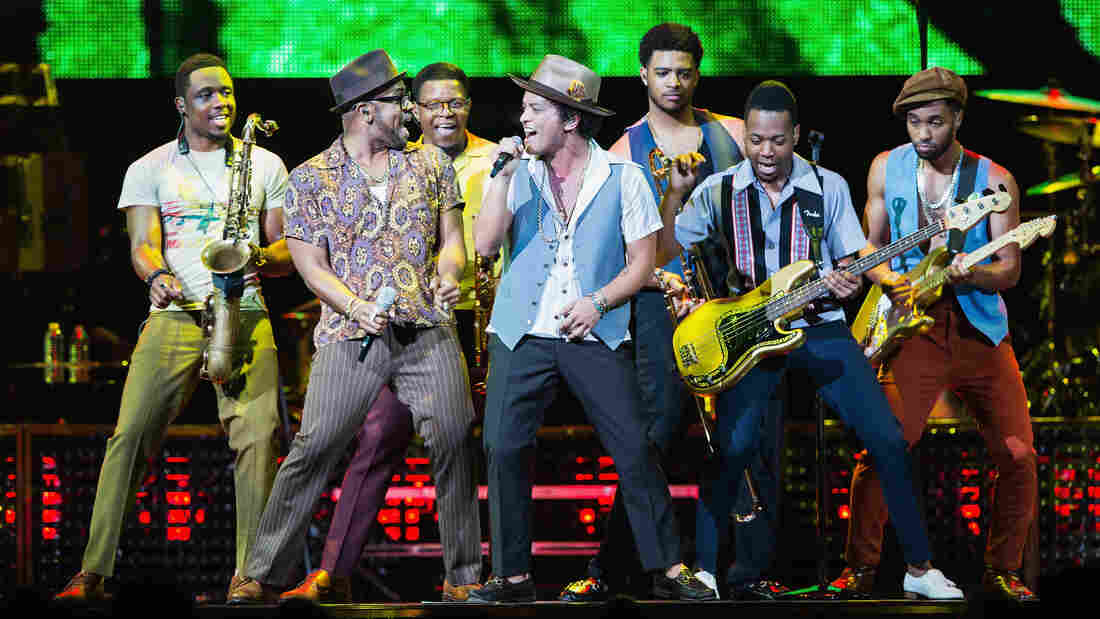 Just One Of The Guys: Bruno Mars (center, with microphone) performs with his band at Key Arena in Seattle, Washington on July 21. Mat Hayward/Getty Images hide caption 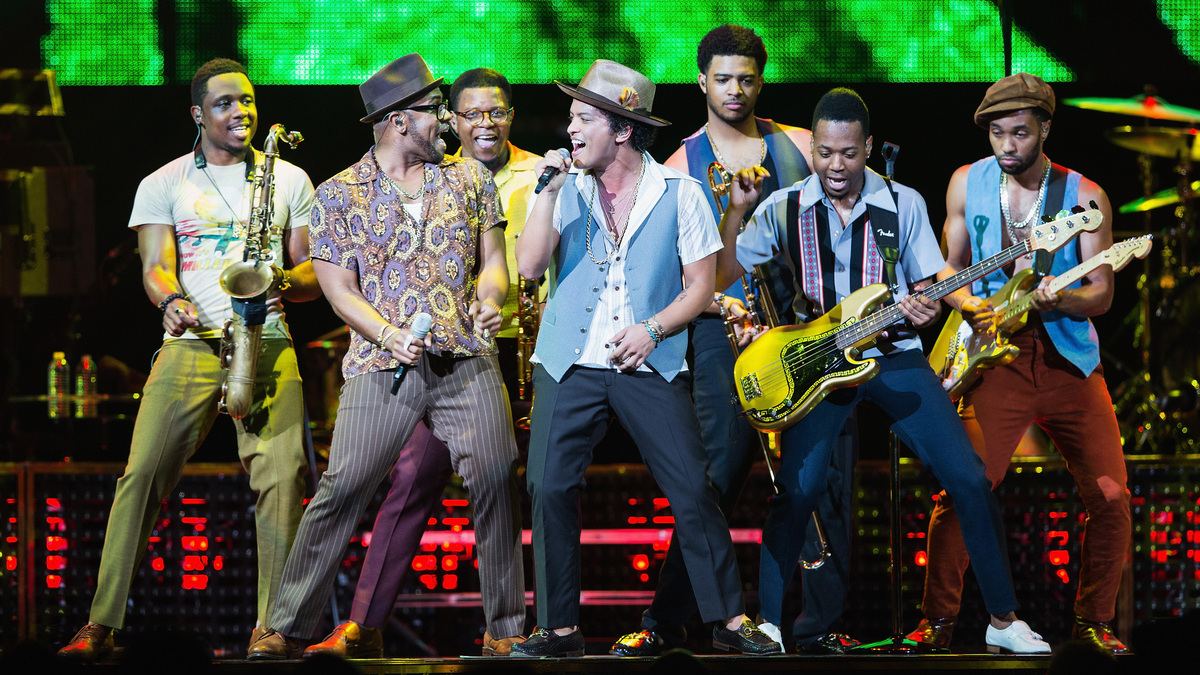 Just One Of The Guys: Bruno Mars (center, with microphone) performs with his band at Key Arena in Seattle, Washington on July 21.

Party music isn't usually meant to change the world. It's for relaxing and getting a little bit wild; it inspires kissing and booty-shaking and high-fiving, not marches up the Washington Mall. The chart-topping good time guy Bruno Mars, whose dedication to fun comes second only to his respect for those who've gotten the joint jumpin' in the past, would probably agree that his songs aren't about to start any major social movements. And yet, after seeing Mars play in Seattle on Sunday, I think he's offering an antidote — albeit a sweetly ephemeral one — to this summer of current events-inspired malaise.

Mars has released two sparkling albums full of radio friendly pop, 2010's Doo-Wops and Hooligans and last year's Unorthodox Jukebox. You can't escape the sound of his voice or his sensibility, but though he's dismissed by many as a mere song-crafter, Mars is actually the moment's most valuable pop historian. In his songs we see the whole history of melodic music you can dance to, from Tin Pan Alley to his beloved early-'60s pop to that '80s moment when new wave and R&B collided. His sound is also wonderfully international, interspersing reggae and Latin influences with the swagger of hip-hop.

Even the name of Mars' show: the Moonshine Jungle Tour — is risky in the most playful way. He's acknowledging that the music he loves is rooted in exoticizing and stereotyping people who look like him. But Mars asserts his own humanity by stressing his skills and grace as a musician. Instead of the almost musical theater-like atmosphere of most current arena tours, this one focuses on the basic unit of post-midcentury pop: the band. As Mars and his mates bust synchronized moves and admire each others playing, their delight is our delight.

It's just that old thing that art occasionally offers: a glimpse of a better world, or at least a happier one. Lately I've been struggling to cope with all the complicated and painful news that's come our way; maybe you have, too. The verdict in the Trayvon Martin case has led to many crucial but painful conversations about race. The bankruptcy of Detroit — the city where so much great pop music has been made — inspires worries about the state of urban America and the growing distance between our rich and our poor. Recent events in the Texas House of Representatives highlight how deep our political divisions have become. For an average citizen, this is a lot to deal with.

This summer's most-heard songs encourage listeners to put all these concerns aside and try to get lucky, blurring lines and cruising down the pleasure highway until they just can't stop. Pop's mood is hedonistic and seemingly oblivious to consequence. Mars's own stake in the Top 10 is "Treasure," a feather-light '80s throwback whose tone is set by its computer-voiced opening line: "Baby squirrel, you'se a sexy m-f-er."

The power to move the soul through the feet is what Mars and his good-natured band tap into on the Moonshine Jungle Tour. Plenty of disco-fabulous lighting effects gleaming against a backdrop that looks like the front grille of a classic Cadillac let the crowd know that this is an arena show, intended to dazzle. Unlike many headliners, however, Mars roots his spectacle in the act of generating a groove. As other reviews have noted, Mars doesn't set himself apart from his eight-piece band: he dresses like them, dances in sync with their steps, and lets them enjoy significant moments in the spotlight. (This is how Mars records, too; he's the face of an equal-partners writing and production team, the Smeezingtons, and fellow Smeez Philip Lawrence is his main foil as well as his background singer.) Every band member takes a turn during the show's centerpiece, a lengthy battle of the Casanovas for the affections of a lucky female fan. In Seattle, Mars arguably didn't even win that contest — Lawrence was way smoother.

This emphasis on camaraderie onstage affected the atmosphere in the whole arena. I've been to plenty of big shows where everybody joined in the revelry, but this might have been the first one where I saw no impropriety, no disregard for others' feelings, no unwarranted aggression. As I danced, the woman behind me smilingly encouraged me to put down my pocketbook and shake my hips; the guy next to me grinned brightly as he swayed around the backpack he'd placed on the floor. A family a few rows away, including a pint-sized brother and sister in their Sunday best, took selfies and waved their hands in the air. Across the aisle, another guy lost himself in an unselfconscious shimmy. Even the guards watching the entrance to the floor sang along as Mars punctuated his own hits with quick versions of Ciara's "Body Party" and R. Kelly's "Ignition."

My own nine-year old daughter sang along heartily to the Mars hits she knew best, but made a face when she recognized he was talking about sex. Her dad noted that this was the first concert we'd all attended together by an artist we'd all discovered at the same time. Since hearing his lithe tenor guesting on B.o.B's hit "Nothin' on You," my husband and I have admired the almost sneaky ambition of Mars and his team, who clearly see themselves as 21st century Lieber and Stollers. Though his material is often explicitly racy, Bruno Mars is a family-style pop star because — like a century's worth of master manipulators of the double entendre — he grasps the connection between grown-up thrills and childish giggles. Think of Mars' first idol, Elvis Presley, slyly winking and shaking his hips. In today's hyper-sexual pop world, such innuendo is so gentle that it charms the parents and doesn't scare their kids.

Mars's fans, incidentally, were as diverse as it gets: Asian, African-American, Latino and white. Mars himself is half Puerto-Rican and half-Filipino, and his band is mostly African-American. In Seattle, a city being redefined as much by middle-class immigrants as by overpaid tech-heads, Mars's crowd felt like the future. And being in that room, joining in the dance, allowed me to imagine the America I want to live in every day: tolerant, aware, kind.

I wouldn't make too much of this feeling — it's the kind of thing that overtakes many crowds in the midst of simultaneous enjoyment — but what makes Mars's show special is that the music itself provides a basis for believing in love and grace across the lines of identity. It's often been said that Mars's songs are derivative; he borrows heavily from throughout the history of black pop from gospel to hip-hop, and as he himself said in concert, he named his first album Doo Wops & Hooligans because he's "in love with old school music." Instead of feeling stale, however, in concert Mars's traditionalist tendencies reminded us that popular music has been the main symbolic meeting ground for people who otherwise might not have ever left their own neighborhoods.

Mars's show wasn't absolutely perfect, even as a fantasy of an open-hearted world. For one thing, he could use a woman in that band to counter the testosterone, which is heavy, no matter how smooth. And as he becomes a better musician, able to lead a large ensemble into the kind of deep funkiness that provides not just sensual enjoyment but deeper revelation, Mars may find himself wanting to tackle some harder subjects head on. That's what happened with many of his idols, from Sly Stone to Jimi Hendrix to Carlos Santana to George Clinton.

Party music, it turns out, can become pretty serious. Writing about Stevie Wonder's decision to boycott Florida after the verdict in the Martin case, Jack Hamilton wrote that "you don't need to look far for evidence that this country values black American culture substantially more than it values the lives of black American people." It's important to acknowledge that the same person ecstatically boogieing to "Locked Out of Heaven" may have locked her doors habitually upon seeing someone who looked like Mars, or his bandmates, in the arena parking lot. But I think it's also fair to hope that all of us who shouted along with one of his most-loved ballads of sweet romantic uplift were able to carry forward the message contained within the evening's grooves, and in that case, made explicit in its chorus. Look at each other, concertgoers. Thank Bruno Mars for helping each of us take the risk to believe this about each other: you're amazing, just the way you are.