Accessibility links
The White Mandingos: Music That Defies Definition : The Record Three black musicians — a punk bassist, an L.A. rapper and a part-time guitarist — took on a name with ugly associations to make music that can't be categorized. 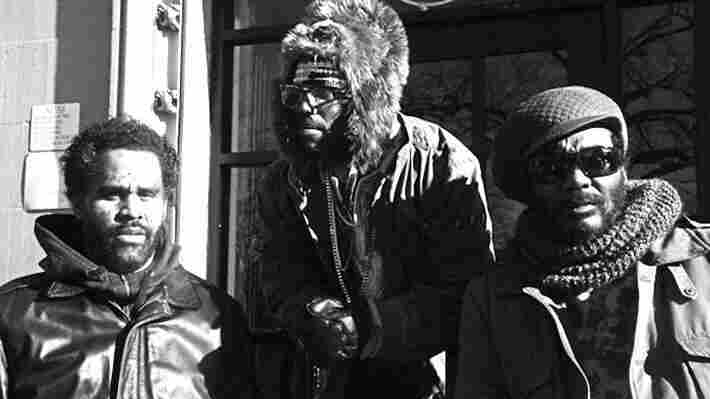 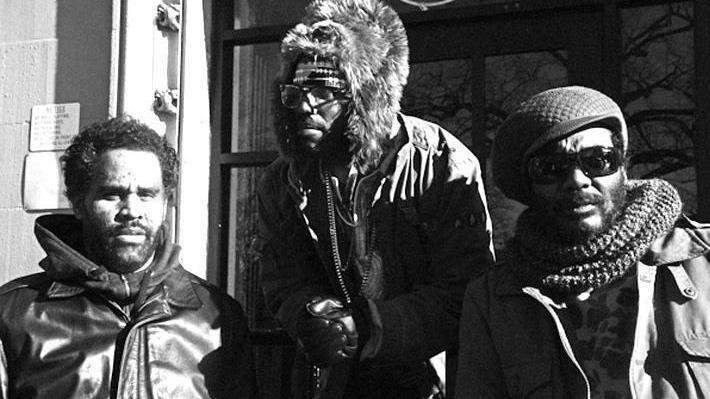 The White Mandingos are, from left, Sacha Jenkins, Murs and Darryl Jenifer.

Last year, Quentin Tarantino's movie Django Unchained resurrected a word with a lot of ugly associations: mandingo. It's the word we use for a group of people from West Africa who call themselves Mandinka, several hundred thousand of whom were sold into slavery. This year, three black musicians have claimed the word for themselves, and they're dropping their debut album under the name The White Mandingos.

The group resists definition. "What we've come together to do is just an extension of all of our experiences as black men, but we're not just limited to being black," says Sacha Jenkins, who plays guitar for the group. "I mean, I think our influences aren't necessarily just black."

Jenkins makes his living as a journalist — over the past 20 years he co-founded ego trip magazine, wrote for Vibe and Rolling Stone, has been the editorial director of Mass Appeal, and produced TV series for MTV and VH1. He's a rookie to the music-making game, but his partners in The White Mandingos are industry veterans. Darryl Jenifer has played bass with D.C. punk band Bad Brains for 30 years, and worked with musicians as varied as Jonathan Richman, Lauryn Hill, Ric Ocasek and Lil Jon. L.A. rapper Nick Carter, who goes by the name Murs, has built his career on the independent hip-hop circuit over the past 15 years.

The White Mandingos' album is titled The Ghetto Is Tryna Kill Me, and it could be called rap rock. For some people, that too is a disparaging term. "Some people" includes Jenkins.

"I don't like 'rap rock' at all. Like I hate it. I think it's — it's terrible!" But, he says, he knew a collaboration with Jenifer and Murs would be interesting. "Murs having this really strong hip-hop background — that's kind of how it all really came together. It's really cemented in rock 'n roll. My passion for rock, his pedigree in rock 'n roll, but also our love and respect for hip-hop. It's very rare that you have this kind of combination of a guy who's really, really a rapper. He's not some dude who wanted to be a singer, who raps a little bit. Like, this is a dude who has rapped for millions of people and is good at what he does."

Jenkins thinks the group's album sounds like all of its members' influences: the hip-hop Jenkins grew up with, the rock he found later, and the Caribbean records his mom used to play; the West Coast style of storytelling rap Murs knows all about; The Isley Brothers, Led Zeppelin, punk and reggae Jenifer was into.

"We came together without a lot of pretense, and trippin on this and that," says Jenifer. "We just look at each other and do what we do. Which is the beauty of it all."

The White Mandingos came together at Jenifer's house in Woodstock, where he and Jenkins would hang out and jam. But what they were laying down didn't really add up to anything until Jenkins thought to call Murs.

"Once he hit it with the lyrics," says Jenifer, "it opened up. Like, something you may not like — 'I don't really understand that' — you put some lyrics on it and what you thought was an inconsistency, or a mistake, turned out to be the best thing there."

Murs has been performing hip-hop, wearing Basquiat dreads, at punk and rock festivals since the '90s. He says all three musicians have never quite fit in.

"We were kind of talking about identity, and a term I've used before is 'the only' — when you go to certain things and you're the only black person there," he says. "When we started talking over the phone, I was like, 'Well, why don't we just tell a story about this kid who is from the hood, gets a record deal as a rock artist and — still trying to maintain his roots in his neighborhood, whilst trying to excel in this new world — and the struggles that might come about.' And that night I just came up with the 10-song outline."

The narrator is named Tyrone White, born 1988 in New York City. And while that makes him much younger than The White Mandingos, Jenkins says his struggles echo their own.

And Murs wanted to talk about interracial relationships.

"Interracial relationships are modern, I think, love songs. And I wanted to tell that story, because that story of black and white people being together is only 'Ebony and Ivory.' It's OK to love someone of another race, but no one actually talks about how weird it is to go to your white girl's parents' house and meet her parents for the first time. And then, how weird it must be for them! And they're trying to be cool, but then they say something awkward, and you don't want to say anything, 'cause you're still a guy trying to impress your girlfriend's parents — before race."

He says that the music that's supposed to be talking about what's happening in his generation is rap — but rap isn't keeping up.

"A lot of people claim to be progressive," says Murs. "And they make progress — there's lots of progress being made in mainstream rap, I won't doubt it — but they still stick to a pop formula. They still make sure it's mixed by the right person. They still contain a lot of contemporary ideas."

The ideas of the future are facilitated by something no one in The White Mandingos had when they were kids: the Internet. All three of them talk about how much money it used to cost them to venture out, to buy albums by groups they'd never heard of. Today, says Murs, up-and-coming musicians know his music and Jay-Z's music, and they didn't have to spend a dime to find it. "They just — YouTube, YouTube, YouTube, YouTube, YouTube. So their influences are vast."

Not only is access to culture cheaper and more convenient than it was in the '70s and '80s, many of the next generation of musicians, especially those knocking down the cubicles of genre like Tyler, Earl Sweatshirt and Chance the Rapper, are on a more equal playing field than Murs, Jenkins and Jenifer were.

"You're dealing with the economic development of the black community," says Murs. "Tyler's mom is not in the projects. Earl's mom is very — they come from very intelligent, well-educated families, and now we're getting very intelligent, well-educated kids with foul mouths. They grew up on No Limit, Cash Money, but they went to private schools and they read a lot." Murs says he was similar, listening to Ice Cube and reading Thomas Pynchon, but he was alone in it.

Jenifer says what the kids are into always sounds strange to the grown-ups. "One time my aunt told me she thought I made vulgar music. She thought I almost was making evil music. But I had to tell her that's almost compared to when the thunder and lightning is clapping, like a little kid will cry, but it's a glorious event. It's not a negative event."

Jenkins has been getting clowned for boundary defiance since he was a kid: "When I was riding a skateboard in the '80s people in my neighborhood threw 40 ounces at me." It still happens: "Daryl, he says that I play like a quote-unquote white boy," says Jenkins. "You talk like one, too," says Murs. "Yeah, OK, I talk like one, too." "That shirt's kinda doing it, too," adds Jenifer. "My shirt? My shirt's making more like a white boy, too. Anyway — I'm sorry I don't have FUBU on." But now everybody's laughing, and nobody's throwing anything.

The Ghetto Is Tryna Kill Me tells the life story of a fictional character, but it sounds like the life story of three real people. "If it can connect with a kid," says Jenkins, "and it's not just black kids — I think kids in general are looking for identity. And they're always looking for people to look to who are confident in who they are. If you listen to the entire record you see the evolution of a person who makes mistakes, who comes from mistakes, who wants to do the right thing — and sometimes does and he doesn't. But that doesn't mean you can't be proud of who you are. That doesn't mean you can't go against the grain."