Accessibility links
Can Streaming Services Make Money? : The Record Pandora, Rdio and Spotify are changing the way we listen to music, but all have money issues. Apple and Google join the fray this year; Jimmy Iovine is launching a service tied to Beats by Dr. Dre. 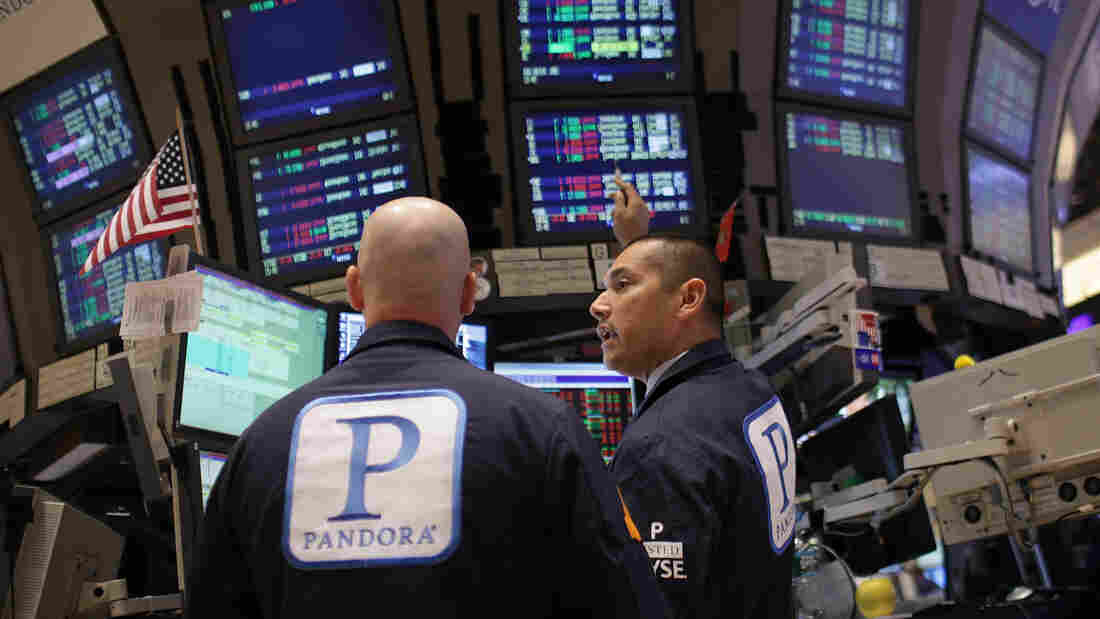 On June 15, the day that Pandora became a publicly traded company, traders on the floor of the New York Stock Exchange wore the company's insignia. Spencer Platt/Getty Images hide caption 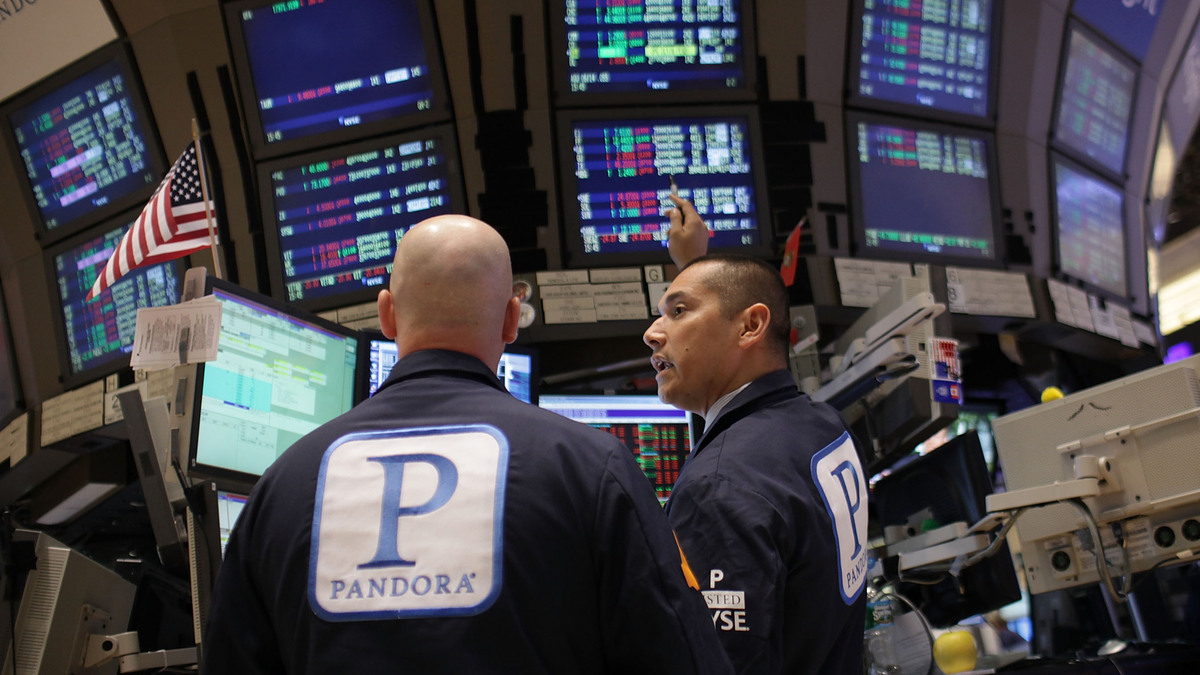 On June 15, the day that Pandora became a publicly traded company, traders on the floor of the New York Stock Exchange wore the company's insignia.

Every time you turn around it seems like there's a new streaming music service. Pandora was among the first a decade ago. Rdio launched in 2010. Spotify came to the U.S. in the summer of 2011. Apple and Google plan to join the fray this year. Music producer Jimmy Iovine is launching a service tied to his headphone brand Beats by Dr. Dre.

What's odd is they are all jumping into a business that, so far, doesn't seem to be turning a profit.

Take Pandora. The Internet radio service uses an algorithmic formula to create a personalized stream of music that it designed to keep me listening. I let Pandora know I like Run DMC and it creates a stream of similar music. The longer I listen, the more ads Pandora can sell — and, you'd think, the more money it would make. In fact, the more I listen, the more it costs, says Pandora Chief Financial Officer Mike Herring.

"It costs us essentially around $20 in licensing fees for every thousand hours that we play in music," he says. "That means that we have to make $21 in revenue for every 1,000 hours to make a dollar."

It's actually a little more than that — Pandora has 70 million active monthly users who each stream an average of about 18 hours a month. The company estimates it has to pay between $800,000 and $900,000 in fees every day.

Herring says that last year, Pandora spent 64 percent of its revenues on music. One way to become more profitable would be to pay out less money in royalties. But the service is classified as a pure play Internet radio station, which means the recording royalties it pays for streaming a song are set by the U.S. Copyright Royalty Board. So Pandora's been lobbying Congress for lower rates, and that's generated a lot of angry press from musicians.

Some streaming services that aren't governed by the Royalty Board face similar issues. Subscription-based streaming services such as Rdio and Spotify negotiate royalty rates directly with the labels. But those services aren't making any money either.

Rdio won't make the details of its revenue public, but Spotify took in more than half a billion dollars last year. Nevertheless, its losses grew from from $60 million to $78 million. Spotify executives say 70 percent of its revenue went to paying licensing fees.

David Pakman, a venture capitalist who worked for Apple in the 1990s, says these kinds of upfront costs are discouraging investors and innovation.

"It's nowhere near as active a space for innovation as, say, social media, mobile apps," he says. "Pick any other subject matter and there are literally thousands of companies entering the space. Digital music has been a perilous one where investors have lost a huge amount of money."

Pakman says if there were fewer upfront costs, there would be a lot more new streaming services. But economist Jeff Eisenach says getting involved in the music streaming business is no less attractive than investing in Wal-Mart.

A visiting scholar at the American Enterprise Institute, Eisenach says a retailer like Wal-Mart lays out 65 percent of its revenues to buy the products it sells — almost exactly what Pandora pays in royalties. "To say this is different from what happens with other businesses. ... You know, everybody who sells more pays more," he says.

So, the more shirts you sell, the more you pay the supplier to buy those shirts. The more songs users stream, the more a service pays in royalties and licensing fees. Eisenach says companies like Pandora and Spotify are making a lot of money — they're just using it to target new audiences rather than putting it in the bank and calling it a profit.

"There is a huge advantage to becoming the largest because there's so many economies of scale," he says. "The more listeners you have, the more people value you, the less your cost per listener is — and all firms in these markets lose money initially as they invest in growth."

Though streaming music services have been around for about a decade, Eisenach says these are still the early days of the industry. In fact, Pandora CFO Mike Herring says he sees a lot of room for growth.

"It's important to remember that 80 percent of our listening is done on mobile devices," he says. "The mobile monetization world is very much in its infancy, especially the advertising world, which Pandora uses to monetize its free listening."

Drew Larner, the CEO of Rdio, thinks there's a lot of money to be made. "With real scale," he says, "we will absolutely be profitable ... wildly profitable."

Larner defines real scale as 25 to 30 million subscribers. He won't say how many paying subscribers Rdio has now, but its competitor Spotify has only 6 million. Larner says most people are still more interested in owning music than paying a monthly fee to listen, but that could be changing as well. Sales of albums — both physical and digital — are declining, and streaming grew by 24 percent in the first half of the year.

Still, Larner doesn't know when streaming services will get profitable. "I don't have an answer," he says. "I think it's on the horizon."

It's a horizon that Larner believers entrepreneurs and investors will keep reaching for with their time and their money because, like most people, they have an emotional connection to music and they dream about being part of it.

This story should have stated that in addition to being a fellow at the American Enterprise Institute, Jeff Eisenach has been a "paid consultant for Verizon and its trade association," as The New York Times detailed in this report.