Accessibility links
Drake And Pop Music's Good Girl Problem : The Record In unstable times likes ours, and on both "Blurred Lines" and "Hold On, We're Going Home," the good girl's temptation or redemption resurfaces as a theme. 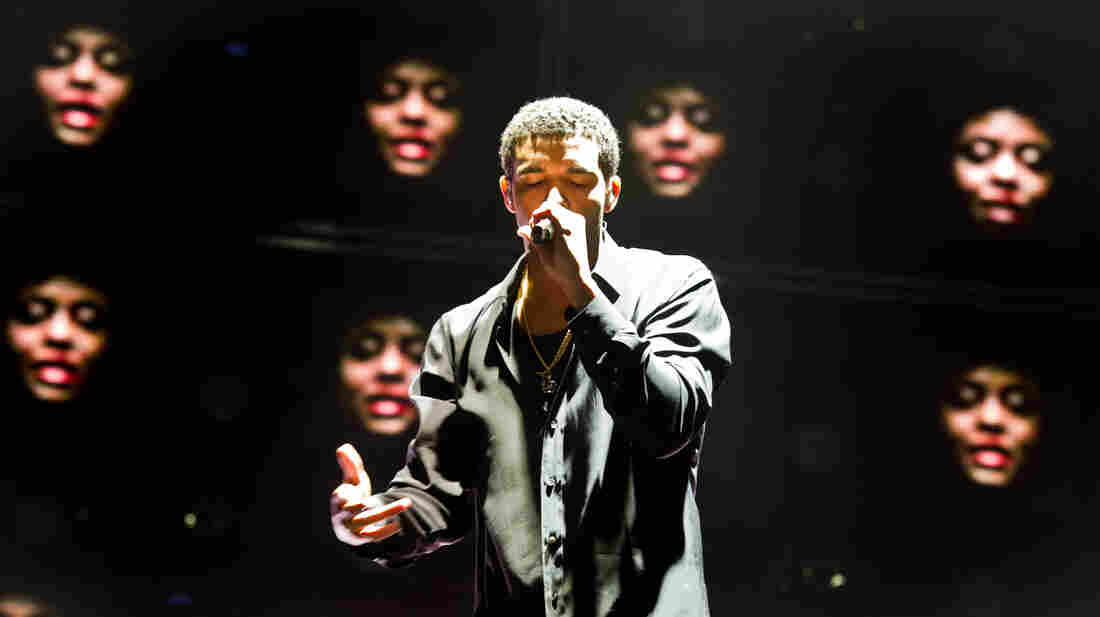 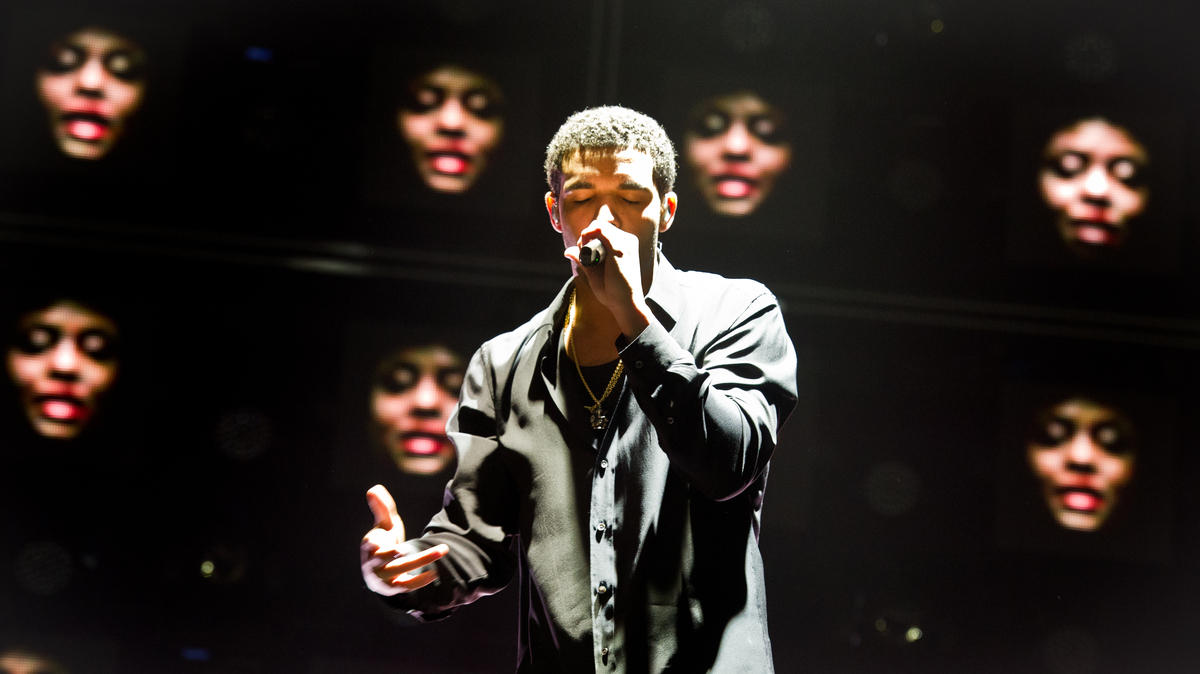 A good girl ushered in the summer; a good girl is leading us out. And on some symbolic level, it's the very same one. "Hold On, We're Going Home," the emotional centerpiece of Drake's recently leaked new album, Nothing Was the Same, sounds like an answer song to Robin Thicke's still inescapable "Blurred Lines" — except it's not Thicke's female conquest who gets to speak, it's the other man, the scorned domesticator from whom the slick seducer offers escape.

While "Blurred Lines" presents a confident man leading a hesitant woman toward pleasurable discoveries (or, some have thought, harassing her), "Hold On" offers rescue grounded in confinement. In a croon so gentle it buffs the blade of Thicke's delivery, Drake reminds his lady that he's there for her — in the romantic sense, but also as, essentially, her keeper. "I got my eyes on you," he begins, signaling surveillance; he wants her "hot love and emotion," but he also wants to keep it in check. "You're a good girl and you know it, you act so different around me," he continues before giving her the ten-minute warning: Hold on, we're going home. I'll get your coat and call the valet, baby. You tell that snake to go his way.

This is a cruel reading of a song that Drake says he hopes will be played at weddings and (this is sweet) by soldiers missing their family members. But together "Blurred Lines" and "Hold On, We're Going Home" play out an old crisis — the crisis of the compromised good girl — by the book. The specific text that comes to my mind is Porgy and Bess, George Gershwin and DuBose Heyward's operatic tragedy of the African-American Great Migration. If the show could be cast across racial lines, Thicke would make a perfect Sportin' Life, the drug-dealing Lothario tempting the heroine Bess into an unstable existence. And Drake as the noble misfit Porgy is a no-brainer: no one in hip-hop plays vulnerable yet strong better, and he's even already done a role in a wheelchair.

What these current pop hits carry over from Porgy and Bess, as viewed within the more expansive lineage of music about good girls who may or may not go bad, is the connection between heterosexual romance, female self-determination and money. Popular music abounds with stories of women whose elusiveness leads men to mourn their virtue — and then, sometimes, to violently claim them anyway. Maybe the oldest songs about the crisis of the good girl are murder ballads like "The Banks of the Ohio," which turn on the woman's refusal to marry her lover, who then becomes her killer. The good girl gone bad of the 1920s was also a woman who refused to marry — the flappers and good-time mamas whose insistent self-determination threatened their value as marriage material. After mid-century, these girls were recast as jailbait, girls whose compromised innocence could cause a man to lose everything.

In all of these classic scenarios — and onward through the class-obsessed ballads of the Rolling Stones, songs about kept women from the easy-lovin' '70s and the stricken confessions of hip-hop artists who can't help loving strippers today — the worthiness of women as partners, their integrity as sexual beings, is an indicator of economic stability; if too many women "go wild," it could be a sign that society as a whole has come unmoored. It's a fundamental feminist insight that women are often turned into commodities, whether in real-life exchanges like marriage or through symbolic portrayals in art and advertising. What's less predictable is how the good girl's temptation or redemption resurfaces as a theme in times like ours, when major social and cultural shifts create what feels like unresolvable economic instability. The choice offered a good girl in a song like "Blurred Lines" — be "domesticated" or enjoy an expensive party life — points toward the economic values being contested in a certain moment. Right now, it's about a credit-fueled life of conspicuous consumerism (in "305 To My City," Drake praises a girlfriend considering leasing a Jaguar) versus the more prudent path that allows survival in a long recession such overextension partially caused.

This conflict over financial worth and independence is what really defines today's crisis of the good girl, especially as it's expressed throughout NWTS. "305 To My City" is an ode to a working woman — maybe a stripper, but also very possibly a performer like Drake's apparently on-again flame Rihanna, whose ability to make bank being publicly sexual is as much a challenge to her male companions as is her complicated personal life. "I get it, I get it, I get it, I get it," Drake mutters in the song's chorus, coolly acknowledging that his paramour's hustle is as powerful as his own. On "Pound Cake," Drake's special guest Jay Z interrupts his own bragging to break into the hook from his protégé Rihanna's "Birthday Cake," an acknowledgment that she rolls with the big boys. Drake himself seems to address her more intimately on another key album segment, and not in ways that reflect well on his views of what makes a girl good.

"Wu Tang Forever" and "Own It" form a song suite revolving around the phrase "it's yours." Drake plays with that ambiguous term: at first it applies to a female friend offering him her body, then switches, in classic form, to refer to the rap game itself. Success is his; soon enough, though, it sours. "Own It" transforms the romantic bliss of the earlier song, finally naming the most common meaning of "it's yours" — accusations of paternity — and then chastising the woman who supposedly owns his heart for being "on tour, getting' money." In his rhyme, Drake turns his heart into her s---t: "own it" becomes a bitter call for this female free agent to settle down and become his.

Drake is known for such expressions of confusion regarding romance. As on his earlier albums, he spins tales about many potential mates on NWTS, struggling to determine what might be good or bad in the women he's loved. As usual, women's labor and financial independence is a recurring factor. Frequently engaging with contemporary hip-hop's prime female archetype — the stripper/exotic dancer/lingerie model — he lives out redemptive fantasies about uplifting these too-mobile women. On "From Time," naming former flames in relation to where they've worked — Bria who he discovered at Macy's, Courtney from Hooters — he imagines them under the wing of his wealth. But they really don't need him. "I love me, I love me enough for the both of us," sings Jhene Aiko in the meditative chorus. Her lyrics call for Drake to let her have some power, too: "Darling, you give but you cannot take love."

That's easier said than done for a man who, in another song, admits that he'll "wear every single [gold] chain in the house" just to remind himself of his net worth. As much as Drake's loverboy image and R&B-steeped sound play up his interest in romance as a theme, he writes as frequently about his ambivalence regarding status and wealth. Women occupy Drake's interest for many reasons, from the simplicity of one-night stands to the deep complexity of lifelong relationships. But he also needs them as objects through which he can demonstrate his wealth. "Next time I spend I want it all to be for you," he sings at the climax of "Own It." What's central, the time or the spending? It seems like the latter. In "Connect," another angry song about an overly self-reliant woman, he wishes his lover would "learn to love people and use things, and not the other way around." Yet the inability to distinguish people from things is an ongoing problem for Drake.

In the end, it's Drake's own unstable identity that makes him one of pop's most fascinating young artists. He's biracial, born middle-class and Canadian — all factors that allow him to approach hip-hop's clichés about masculinity from a certain distance. Working with producers who understand how to make this mobility an advantage, he's pioneered a sound that skirts easy definitions. On NWTS, he sings more than ever and raps harder than ever. Like Kanye West, Drake claims a kind of musical entitlement to evade ossifying categories. West's Yeezus angrily tested the limits of that privilege earlier this year. The easy flow of NWTS shows that as an artist Drake's hasn't hit that point of maturity yet.

It may be a woman who's pushing him there. Not a good girl, or any girl for that matter, but the woman who's been central to his life so far: his mother. The saddest lines on NWTS depict her, at 66, questioning her own value in the commodities exchange of femininity. He expresses frustration that she won't get dressed up and go out, but he also hears truth in her warning: "Who the f--- wants to be 70 and alone?" In moments like that, Drake almost expresses the kind of humanism that fights against absolutes of good and bad, in girls or in anyone.