Accessibility links
The Year Onyx's 'Slam' Crashed Pop Radio : The Record In 1993 Onyx's raucous single became an unlikely hit on MTV and pop radio. The song was on the leading edge of a media change of heart. 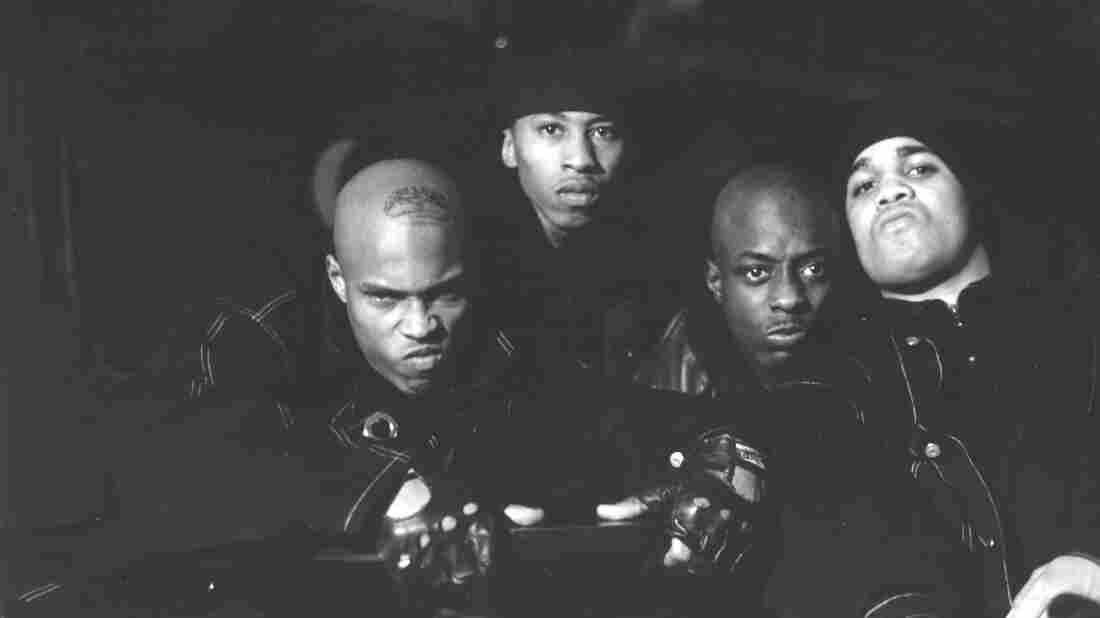 This year marks the 20th anniversary of a remarkable year in hip-hop. Over the 12 months of 1993, Dr. Dre, De La Soul, Salt 'n' Pepa, Snoop Dogg, A Tribe Called Quest, the Wu-Tang Clan and more than a dozen other rap artists released or promoted albums that helped to change the sound of America.

One of those was the debut of the rap group Onyx — whose raucous single "Slam" became an unlikely hit on MTV and pop radio. The song was on the leading edge of a media change of heart.

In 1990, MTV and pop radio sounded like Wilson Phillips' "Hold On." Excluding specialty shows like Yo! MTV Raps, the occasional rap song that received airplay alongside Wilson Phillips and Whitney Houston sounded something like MC Hammer's "U Can't Touch This."

Pop rap from the likes of MC Hammer was anything but "hard." Back then, Rick Cummings was the program director of Los Angeles pop radio giant Power 106.

"Vanilla Ice and Hammer were pop artists," he says. "They were non-threatening. There wasn't anything about their lyrics or their appearance or the sounds of their records that could be terribly troubling or unsettling or even regarded as somewhat aggressive. They were just really mainstream, mass appeal pop records." Some entrepreneurial record labels were releasing hard-hitting hip-hop albums that sold millions without airplay — like Ice Cube's debut — but most were chasing radio with poppy rap.

In 1990 Profile Records signed a rap group from Queens — four kids who called themselves Onyx. I'd just landed my first job out of college at Profile doing radio promotion to specialty hip-hop shows. I was green, and so was Onyx. Fredro Starr, de facto leader of the group, recalls what Onyx was trying to do with its first single, "Ah, And We Do It Like This," which sounded like a novelty pop hit.

"We called it the 'country style' back in the days," says Starr. "I used to go down south when I was 13, 14, and I would come back home to Queens, from summer down south — I was down south for like two months. People was noticing. 'Yo, you sound like you was from the country.'"

Pop radio didn't bite, and the record bombed. Even at the specialty rap shows. Onyx was dropped from the label.

"I walked away and I was like, hurt, depressed, and everything," says Starr. "I wanted to just jump off a building after that."

While Starr and his band-mates nursed their wounds, hardcore rap continued to sell by word-of-mouth, and pop radio continued to focus on hip-hop lite. Then, in 1991, something strange happened. In Los Angeles, Rick Cummings saw it in his stations' ratings, which dropped from first to tenth.

"It started with the ratings faltering," says Cummings. "After being Number 1 and taking the world by storm, [Power 106] suddenly found itself in 10th place and we said, 'Huh. What went wrong here?' And we started doing a little research and getting back on the streets. And we realized very quickly that these young kids, especially the Latinos, were talking about hip-hop. And I still remember kind of this singular moment when a consultant with our group turned to us and said, 'What's hip-hop?' And I thought, 'Oh, boy, we are in trouble.'"

The following year Cummings did something that no pop radio programmer in America had ever done. He made hip-hop the core of his format.

"You didn't have to go to very many events and see the response that A Tribe Called Quest or a Wu-Tang Clan or an Ice Cube in his early days, or a Snoop — any of those artists — got. I mean, it was kind of a no-brainer," he says. "Once we embraced it, we embraced it fully. If we added a rap record, it played around the clock."

Amid these developments, the rap group Onyx resurfaced — with a new mentor, the late Jam Master Jay, a new record deal with Def Jam/Sony and a new aesthetic.

"We created these characters called Mickey Billy and Sticky Fingaz," says Starr. "We were being crazy and having fun playing these crazy, stick-up kid characters," says Sticky. "And," Starr says, "that's where the grimy style got created." They're talking about a song called "Stik 'N' Muve."

But by the time the album was done, Jam Master Jay decided Onyx didn't have its hit single yet. He sent them back into the studio.

"We needed to make a song that was just as aggressive, or more aggressive, but can play on the radio," says Sticky. "We spent the whole week in the studio, and that's how 'Slam' was created."

"We got the chorus from Nirvana, 'Smells Like Teen Spirit.' That's where the idea came from," says Starr. "We wanted to have black people, hip-hop, slam dancing in the gym just like that."

The melody contained a little code language for hardcore hip-hop fans, inspired by a record that MCs had been rhyming over for decades, a song from 1967 by The Mohawks, called "The Champ."

When I saw Onyx onstage in early 1993, I couldn't believe this was the same group. Gone was the happy country-style. They were bald. They snarled. They yelled. And, for the first time, they rocked. Onyx was making music somewhat closer to their hearts.

Ironically, in becoming more true to themselves, the members of Onyx were falling in line with pop radio's new openness to the sounds of the street. At that time Johnny Coppola did radio promotion for Sony Music. "I can remember getting a call from the music director at WPGC," he says. "'Dude, this record is so off the hook, the phones will not stop ringing.' I had five or six big stations calling me telling me, 'You've got power rotation on this record.'"

Onyx made a rowdy video for "Slam" that was as smart as the record. David Belgrave commissioned it for Def Jam. "Big crowd scene, moshing, slamming, crowd surfing," he remembers. "OK it's white, it's black, this is hip-hop, there's this rock thing, it's east and then they're out in the west coast with these guys tatted up and the wife beaters on in front of the low riders."

The video hit MTV right when the channel had also begun to play harder rap. Patti Galuzzi was MTV's director of music programming.

"I feel like 1993 was the year that the rap artists in particular started moving in heavy rotation.," she says. "Onyx felt like it was smack in the middle of the sort of thing that we could play. It's a really memorable hook. The video looked a little bit like a grunge concert. They looked authentic. They looked really cool."

Galuzzi and MTV did have one problem: The album title, which they had to find some way to display onscreen. Solved with this spelling, says Galuzzi, "B-A-C-D-A-F-star-star-star-Up."

"But," she says, "there was nothing about the lyrics that were misogynistic, violent. And we did play it in heavy rotation. It was something like number 13 in the top 100 of 1993, which is huge."

Onyx themselves were never able to create a follow-up hit, or capitalize on the opening they helped create. Yet "Slam" came at a pivotal moment of hip-hop's ascension to the mainstream. Within a few years, most pop radio stations in the country would essentially switch to hip-hop formats — it was the new rock 'n' roll.