Accessibility links
What Lou Reed Taught Me : The Record Reed made me realize that, for all of my self-stylings as a rebel in love with noise that stripped away the unnecessary, I didn't know the first thing about rock music inflicting the pain of clarity. 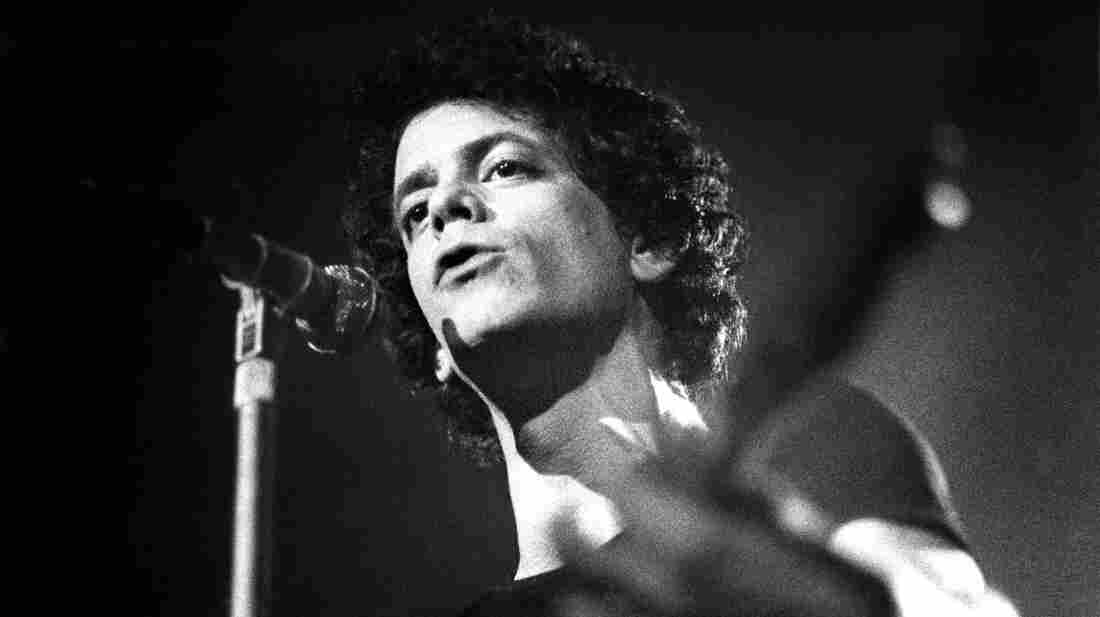 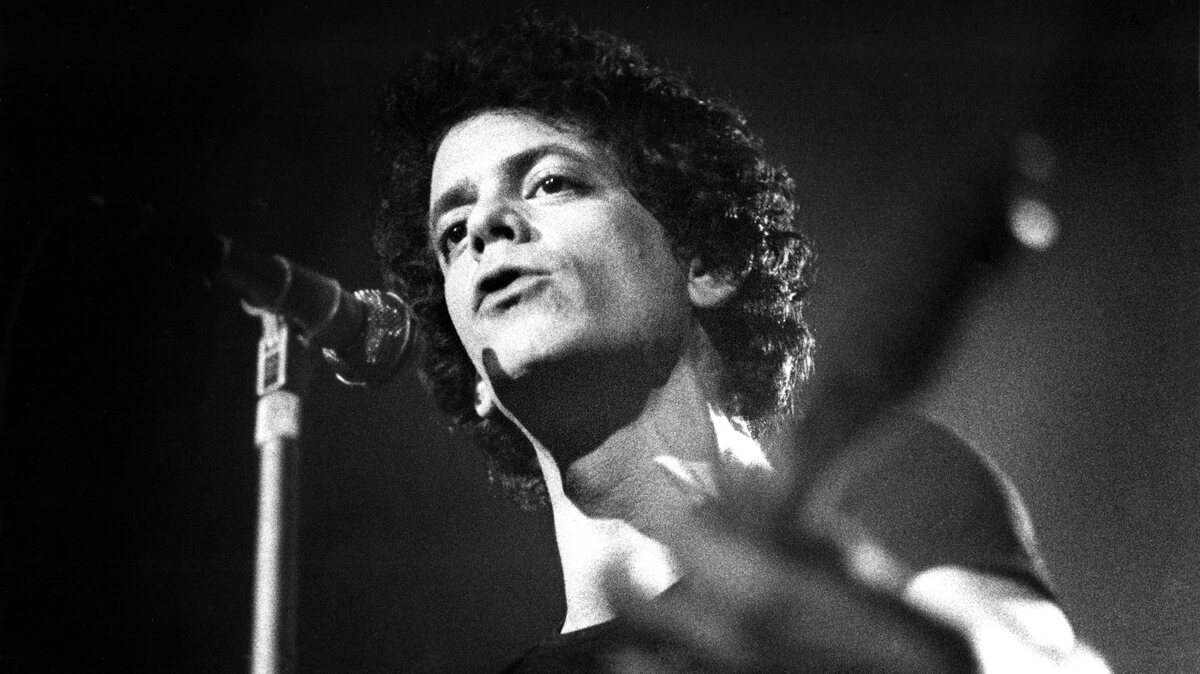 Lou Reed onstage in Amsterdam in 1975.

Lou Reed was the first rock star to truly mess up my mind. It was the end of the '70s; I was in high school. With no older siblings and few friends to guide me — my sweet boyfriend was a classical cellist — I was stumbling around trying to educate myself about the foundations of the punk scene I desperately wanted to make my home. I haunted record-store cutout bins because the remaindered albums there, commercial failures, were cheap. I'd buy whatever looked vaguely roughneck (The Clash and the scruffy early Springsteen had revolutionized my life) or theatrical (after Bowie and Kate Bush started the wheels turning). One day, I saw a cover shot of Reed, whom I recognized because I had that Velvet Underground banana album, wearing aviator shades and looking both Hollywood-glamorous and oily. A car's headlight made a starburst in the plastic that hid his eyes.

What Does Lou Reed's Music Mean To You?

The album was Street Hassle, the first solo album that Reed, an acknowledged godfather of punk, made with that movement's snotty children spitting back at him. Released in 1978, Street Hassle was a self-corrective — Tom Carson, in his Rolling Stone review, called it "an admission of failure that becomes a stunning, incandescent triumph," an antidote to Reed's post Velvets plunge into all kinds of excess. But the way I heard it, having not yet discovered the melodrama of Berlin or the glam glory of Transformer or the mean noise of Metal Machine Music, was as a corrective to me, the listener. Reed made me realize that, for all of my self-stylings as a rebel in love with noise that stripped away bulls- - -, I didn't know the first thing about how rock music could provide a certain kind of unsought enlightenment.

You might call it moral clarity. Ellen Willis did, writing about the Velvet Underground in her landmark essay on the Velvets, first published the same year Street Hassle came out. Identifying Reed as an "aesthete punk" whose relationship to the urban demimonde he always wrote about was intellectual, stylized and distanced, Willis noticed that because he also really grasped the pain of those shadowed characters he wrote about, he ended up a moralist: a writer primarily concerned with the choices that make up people's lives, choices to hurt or help others, to be safe or potentially self-destructive, to love or to harden the heart. "The point was not to glorify the punk, or even to say f- - - you to the world, but to be honest about the strategies people adopt in a desperate situation."

Listening to Street Hassle, with its songs about feelings no one would ever want to admit, with titles like "Dirt" and "Leave Me Alone," I slowly realized what most of the punk or New Wave rock I loved so much rarely gave me. Clarity! Most music was too earnest, too clever, too deliberately gorgeous or bloody exciting to require what Reed's demanded, which was that a listener sit with the ugliness of a moment and really grasp the fatal mistakes and collapses that go hand-in-hand with the risks that bring humans to life.

Reed's songs are actually often quite pretty, his pop ear well-tuned by the '50s rockabilly and doo-wop he loved as a Long Island teenybopper kid. But he would always show the sweat on the lips of the beauty queens and muscle boys he sang about. The fact that those queens were often in drag, and the boys were paying the rent with their erotic encounters, is in some ways secondary. (In another way it's central, since few other rockers fleshed out those characters, especially the queer ones, the way Reed did.) Reed was just as willing to explore conventional married life unsparingly, as he did on his turning-40 album The Blue Mask, the New Wave crossover hit New Sensations or his late-in-life albums about partnered bliss with his artistic soulmate Laurie Anderson. What matters most in Reed's music is the commitment to what's difficult, whether it's expressed through distorted guitar, lyrics whose exposure of a self or a situation peels deeper with each verse, or the kind of melodic richness that doesn't comfort but instead renders a song's singer vividly vulnerable.

Street Hassle's centerpiece, now considered one of Reed's greatest accomplishments, taught me that getting just what I wanted from a song (uplift, for example, or sloppy catharsis) wasn't always the best thing. "Street Hassle" includes bluntly sexual lines that turned me on, but also made me feel the edge of my own prudery. It explores how one person dehumanizes another and, just a few minutes later, how losing one person can make a person feel real and whole for the first time. It's a song suite that doesn't sound at all like punk; it features strings, female back-up singers and Reed definitely crooning. There's also an uncredited spoken-word passage by the then-rising Springsteen that adds in some of that future superstar's trademark grandiosity, serving as a telling contrast to Reed's own cooler storytelling. The song's triptych of scenarios is very Velvets: A probable transvestite picks up a male hooker at a bar; a drug dealer worries about how to get rid of an overdose victim's body; and, in the last verse, a more anonymous lover laments his man's departure in naked, needful agony. A lot happens musically around these stories, but every violin stroke, guitar bend and percussive push intensifies the focus on Reed's core message: that opening up your being — to sex or drugs or just to feeling — is inevitable, dangerous and the main purpose of life.

Lou Reed's music takes in and gives us back the whole picture. Describing another one of Reed's signature works, the Velvet Undergound opus "Heroin," Patti Smith once fittingly assessed Reed's breadth of vision. "'Heroin,' to me, is one of our more perfect American songs," she said, "because it addresses a very conflicting subject that has so many stigmas attached to it. It addresses the deeply painful and destructive elements of it, and also whatever is precious about it, just with Lou's beautiful, simple, direct language." Reed himself often explained that he was simply doing what artists in other media do; novelists or filmmakers don't limit their subject matter. Dedicating himself to rock and roll, though, kept Reed committedly exploring the visceral in ways other artists could avoid. In the funky rhythms he borrowed from early rock 'n' roll and especially in the drone and noise that connected him over the years to both minimalist composers like La Monte Young and hard rockers like Metallica, Reed moved through what felt like confusion toward a sense of grace.

Sometimes what Reed moved through was a minefield. He didn't worry about offending anyone or, preferably sometimes, everyone. Street Hassle, for example, also contains "I Wanna Be Black," a proto-rap unspooling of racist stereotypes that makes fun of white hipsters by forcing a deep wallow in ignorance. Plenty of Reed fans find Metal Machine Music, his 1976 excursion into nothing but guitar feedback, unlistenable. Others feel that way about his theatrical collaborations with Robert Wilson; I myself sat through the time-stopping Timerocker at the Brooklyn Academy of Music in 1997 and felt every spring in my seat. Even Reed's most accessible efforts proudly bear painful twists: The gorgeous ballad "Pale Blue Eyes" turns on a blunt justification of adultery; my favorite of his almost-pop dance numbers, "Vicious," is a lighthearted account of personal repulsion.

And then there's "Perfect Day," Lou Reed's "Hallelujah." Like Leonard Cohen's irreverent secular hymn, this one has been milked for exultation by many interpreters. Duran Duran covered it; so did the talent show diva Susan Boyle. It was featured in Trainspotting (in a scene that played upon the theory that Reed's perfect imagined lover is heroin, not a person), got an all-star charity remake in the late '90s and most recently, formed the basis for a Sony Playstation ad. It's a song that will live on, both enhancing and apart from Reed's expansive legacy.

But, like the essence of Lou Reed, "Perfect Day" is tricky. In the original recording, Mick Ronson's piano gives Reed's stately melody a French feel, something like an Edith Piaf song. David Bowie's production adds heft: the thing swells. Reed goes along for the ride. The choruses ring, anthemic, but why is Reed singing about how his ideal lover just keeps him hanging on? At the end of the second verse, Reed's voice dips and his diction clips. "You made me forget myself," he nearly whispers. "I thought I was someone else. Someone good." And the song ends in anger, with Reed muttering, over and over again, "You're going to reap what you sow." The soft focus that seemed to dominate the song in its beginning has sharpened. As Lester Bangs, the writer most passionately dedicated to understanding Reed, once wrote, "If 'Perfect Day' is autobiographical, he must be the most guilt-ridden person on the face of the earth."

See, there's the whole picture. Happiness intermingled with self-loathing. Freedom all tied up in dependency. Rage bubbling through tenderness. It took discipline to put all of this into a song, a determination to not soften into earnestness or excuse the hard stuff in the name of romance. "The core of Reed's sensibility is his visceral aversion to corn," the critic Robert Christgau once put it, succinctly. For the last three decades of his life, Lou Reed was a tai chi practitioner; he learned how to move slowly through uncomfortable positions. All the art he's left us will continue to help us learn to do that, too.