Accessibility links
Street Queens Bury Competition In Brass Band Blowout : The Record In New Orleans this weekend a Red Bull-sponsored battle of the bands corporatized a tradition but still hit all the right notes. 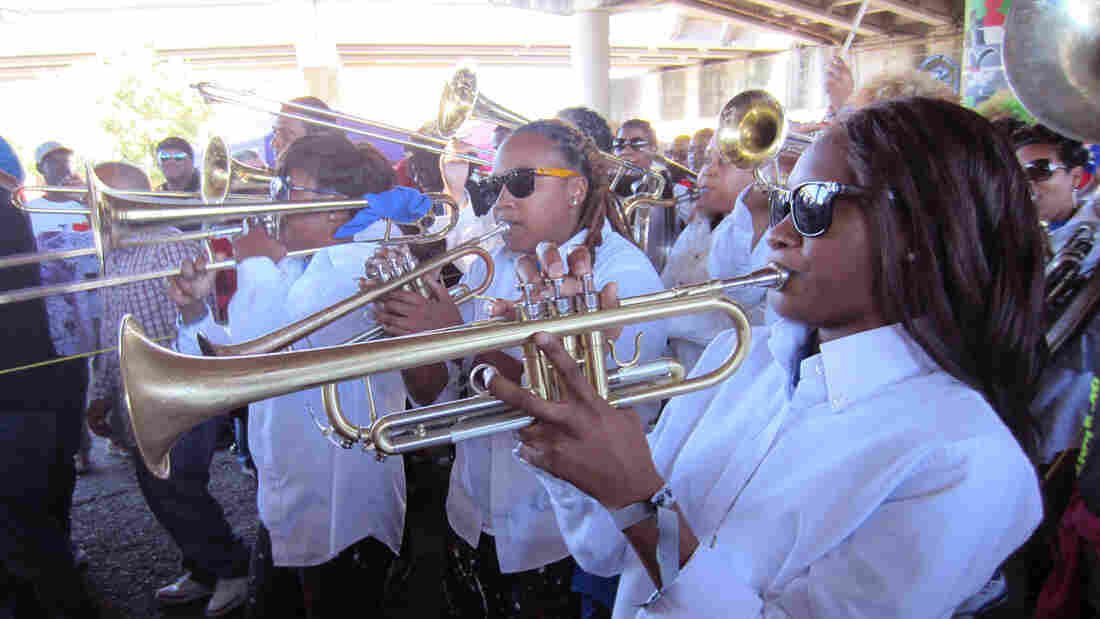 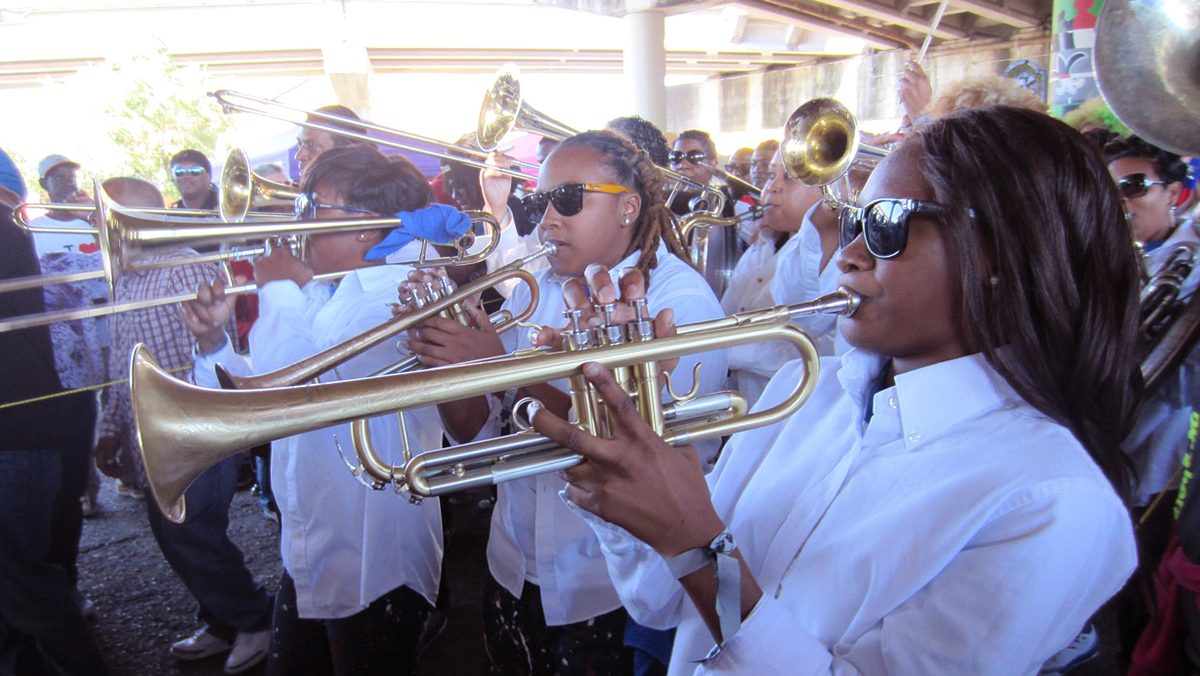 The Pinettes Brass Band parading into the judges area on Saturday.

As the pallbearers carried the casket through the streets of New Orleans, a brass band led the procession with the slow dirge "Just a Closer Walk With Thee." But this was no jazz funeral, this was a brass band blowout, and painted on the coffin were the names of competing bands: New Breed, New Generation and To Be Continued. The Pinettes Brass Band had staged an elaborate ceremony to proclaim the death of their opponents, and when the music transitioned to the up-tempo march that signals the joyous end of the funeral, a dancer jumped out of the coffin ("She's alive!") and led the cavalcade through a tightly-packed crowd and into the judging area.

This grand entrance, followed by a fierce performance over three rounds, helped The Pinettes seal the win when the bacchanalia of brass came to a crashing close. So the big news in a city that surely enjoys the highest sousaphone-per-capita rate in the country is that the top prize was taken by the only all-female brass band (their name is a feminized version of the well-known Pinstripe band) in a patriarchal musical scene of about twenty bands with nary another female instrumentalist. But even more striking, perhaps, is the simple fact that thousands of spectators would spend a beautiful weekend afternoon standing under a highway overpass, cheering wildly for ensembles made up of antiquated acoustic instruments originally modeled on military bands.

It was the beverage giant Red Bull that organized "Street Kings," their second brass competition, and a success by any measure. (The company is famous for its marketing schemes, especially extreme sport events, such as a 120,000-foot fall from space.) If the premise was relatively crude and calculated — how to penetrate a black urban beverage market — the choice to court that demographic with, well, trumpets, points to the vitality of a deeply rooted tradition in this city known for its many, many traditions. Jazz funerals date back to the 19th Century, and second line parades continue to fill the streets of back-a-town neighborhoods each Sunday afternoon. These moving festivals are sponsored by community social clubs and maintained by an informal network of vendors who sew outfits for the club members, sell beer from rolling ice chests and set up massive BBQ pits at designated stops. The question for the Red Bull marketing team was how to relocate a grassroots tradition into a space tailored for consumption. 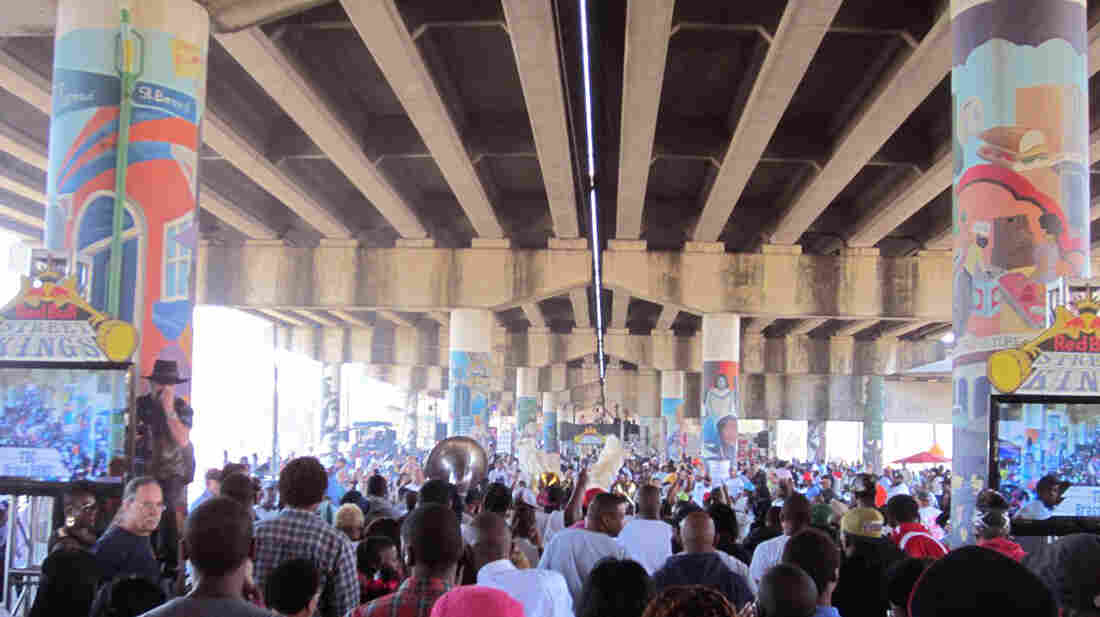 Spectators under the Clariborne Bridge in New Orleans' Treme neighborhood watch To Be Continued Brass Band parade into the judges area on Saturday. Courtesy of Matt Sakakeeny hide caption 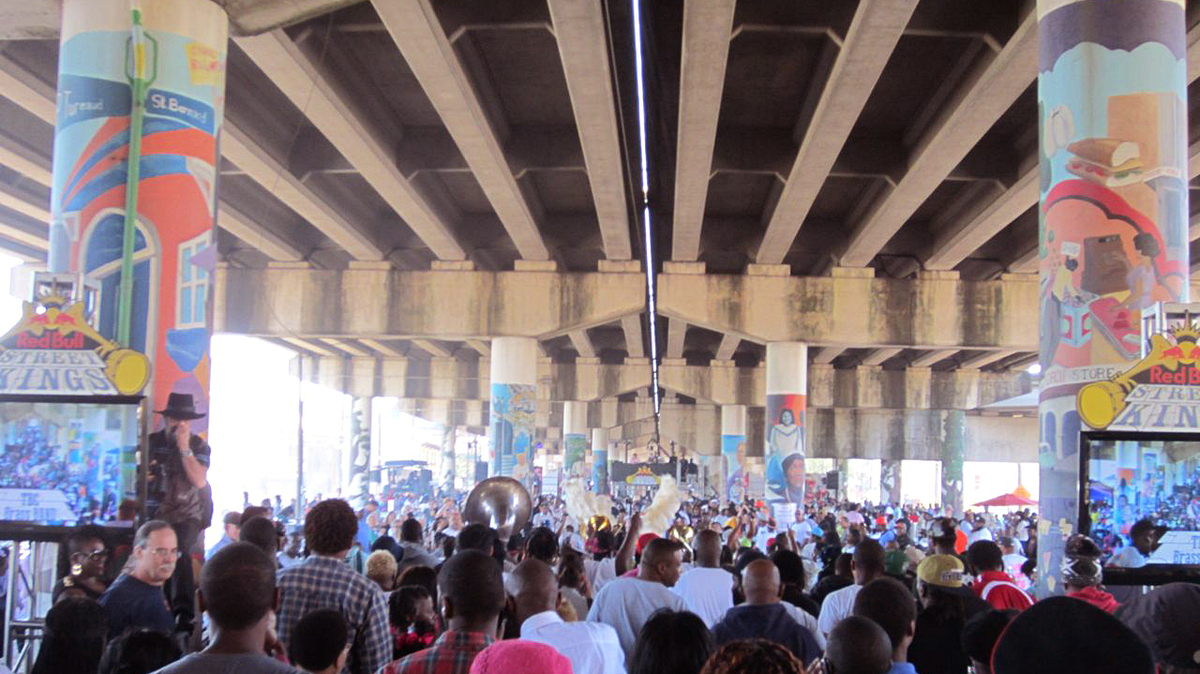 Spectators under the Clariborne Bridge in New Orleans' Treme neighborhood watch To Be Continued Brass Band parade into the judges area on Saturday.

The answer was very strategically. Red Bull tapped Nicole Robinson to produce the event, a winning choice considering her experience as publicist for Troy "Trombone Shorty" Andrews, the local musical wunderkind whose international visibility Robinson has astutely managed. Beside Andrews at the judge's table was a trio of black men with high name recognition locally: jazz trumpeter and singer Kermit Ruffins, television host LeBron "LBJ" Joseph and trombonist Walter Ramsey (bandleader of The Stooges, winner of the 2010 Street Kings battle). Murals overflowing with dancers and brass were commissioned from artist Lionel Milton and done in a post-graffiti style readymade for marketing to a black urban buying public. Cans of Red Bull, need it be said, were freely available, delivered by a small brigade of young, primarily white, women, but feeding the public was left to local food trucks and BBQ vendors who paid $200 each for a spot "under the bridge," as locals refer to the area beneath the imposing decks of the Interstate.

While the selection of judges, vendors and artwork was highly curated, the musical choices were wisely left up to the bands, as was the assembly of their parading entourages. This meant that To Be Continued, currently the crowd favorite at weekly second lines, was able to recruit the top dancers from the parade circuit, while The Pinettes assembled an entirely female cast including a dance troop called the Cherry Bombs.

The result was a three-hour romp of music and dance, fueled by funky beats, brassy blasts and the sweet, sweet nectar of energy drinks, all in endless supply. In the post-disaster economic boom that many in the city are benefiting from, an influx of newcomers combined with a renewed clampdown on music permits and noise regulation has sparked an impassioned debate about safeguarding the authenticity of local cultural traditions. The Street Kings event sponsored by Red Bull was an unabashedly corporatized foray onto grassroots territory that managed to manufacture authenticity by hitting all the right notes. The exception was the name of the event, which only reinforced the patriarchy of the brass band scene, and after The Pinettes' victory march was simply inaccurate. When the "Street Kings" trophy appeared onstage the band held up their own "Street Queens" sign and the energized crowd roared in approval.

Matt Sakakeeny is an ethnomusicologist, journalist and musician in New Orleans, and an Assistant Professor of Music at Tulane University. He is the author of Roll With It: Brass Bands in the Streets of New Orleans, published by Duke University Press.