Accessibility links
Feminists Everywhere React To Beyonce's Latest : The Record At the end of a year in which Sheryl Sandberg released Lean In, Miley Cyrus and Diane Martel provoked everybody, #solidarityisforwhitewomen was born, and British singer Lily Allen put her foot in it, Beyonce's album has reignited conversations about the boundaries of feminism today. 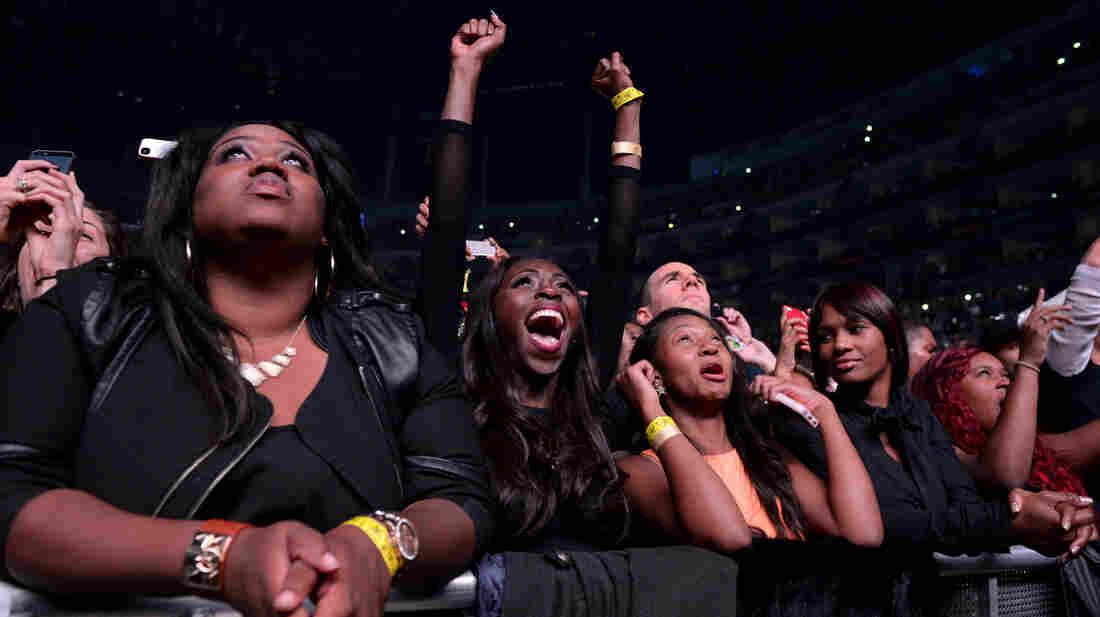 The audience at Beyonce's Dec. 3 performance at the Staples Center in Los Angeles. Larry Busacca/PW/WireImage for Parkwood Entertainment hide caption 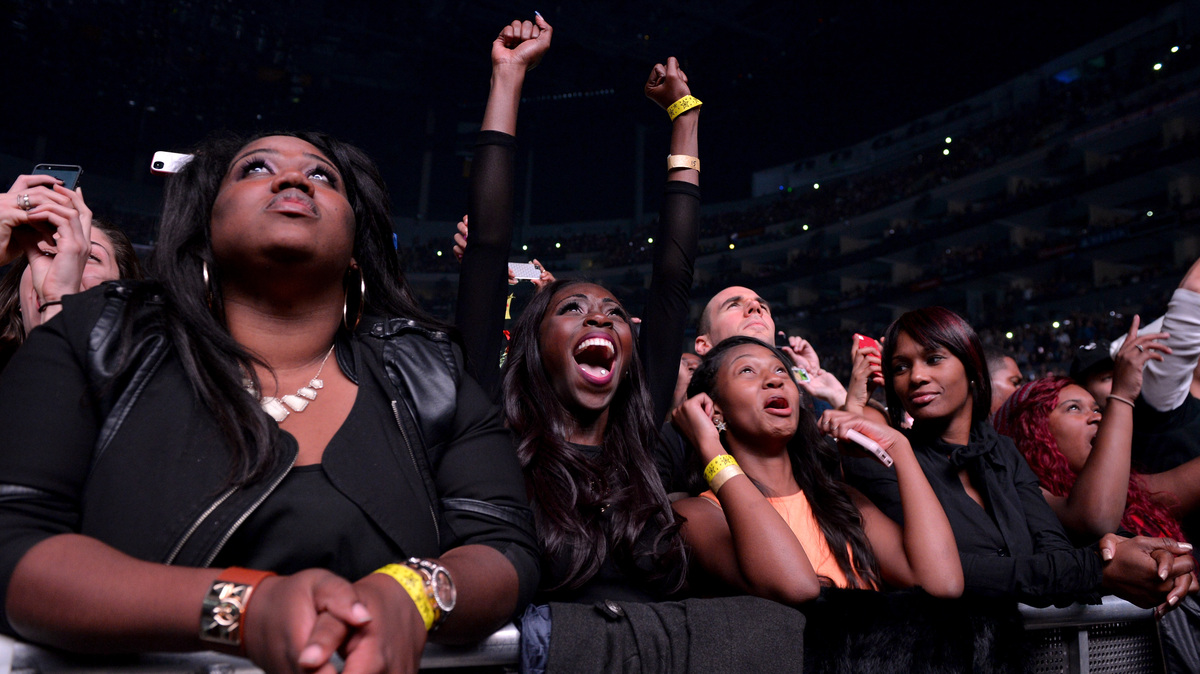 The audience at Beyonce's Dec. 3 performance at the Staples Center in Los Angeles.

617,000. That's how many copies of her self-titled album Beyonce sold in three days last week, after she dropped it without warning. As fans and critics have dug in, debates about the messages and images within it are roiling. Is Beyonce, the sexy pop goddess who has performed at two inaugurations, also this generation's highest-profile feminist? I spoke to six people who identify as feminists — all of whom feel differently about Beyonce — to find out how a pop album no one was ready for is capping off a year of think pieces and Twitter skirmishes.

The night Beyonce unleashed her new songs and videos, filmmaker Tanya Steele watched her Twitter account explode. "When I saw black feminists on Twitter just going crazy, I thought, 'Wow, she must really have done something!' "

So Steele downloaded what her colleagues were calling Beyonce's Feminist Manifesto. "I saw her in pornographic poses," she says. "I couldn't understand what black feminists were looking at." She says for her it was just another tired example of a woman performing for men.

"We don't often see women in bodysuits writhing around on cars except when — I don't know, it's Maxim magazine, so it does feel like a performance for the benefit of men," says Anna Holmes, who founded the women's website Jezebel.

Mikki Kendall writing for The Guardian

But for professor Brittney Cooper, who studies black feminism, Beyonce's videos aren't degrading. Instead, the singer is empowering women of color. "I think it's risque," Cooper says, "but I think she's asking us to think about what it means for black women to be sexual on our own terms."

Writer Samhita Mukhopadhyay agrees. "The album made us feel really sexy, and that's powerful. That means something," she says. "Whereas the rest of popular culture may not have that impact on us as young women of color."

And the reactions to Beyonce are revealing a generational divide between feminists. "For women who are in their 20s and early 30s," says Holmes, "her performance of her sexuality does not feel as kind of icky as it might to someone who's a little bit older and, dare I say, a little bit more conservative, like me."

Over her 15-year career, Beyonce has meshed conventionally sexy imagery with anthems of female empowerment. On a song called "Flawless," from her new album, she makes her thinking about feminism more explicit by sampling a TED Talk given by Nigerian author Chimamanda Ngozi Adichie.

"I am so excited that millions and millions of people around the world are gonna hear a TED Talk that is entitled 'We Should All Be Feminists,' " says Kim Gandy, who has been involved in feminist politics since the '70s and was the president of NOW from 2001-2009. "And they're gonna hear that coming from someone they love and trust: Beyonce."

For Mukhopadhyay, that's why activists like her were excited by this moment. "The majority of women that need feminism listen to Beyonce," she says. "They don't take women's studies classes."

In the age of social media, Beyonce's conception of feminism reverberated past graduate seminars and through Twitter, Facebook, Tumblr, group texts and G-chats. The arguments have been quick, cutting and personal.

Tanya Steele wrote an essay for IndieWire, and she found herself in the thick of it. "Now there are these women coming into the conversation who have never read anything about feminism! And they will argue you down," she says. "So I have to take a deep breath and walk them through to, perhaps, a different way of thinking about the images. Cause they're like, 'Beyonce — she's a grown woman. She has a husband. She can do what she wants with her body.' And so it's walking them back from that. And it requires work. It requires a lot of work."

And then, by Wednesday, the Internet had had enough. #beyoncethinkpieces began trending — a running satire of how much one could conceivably read into an album that's less than a week old.

But critic Alyssa Rosenberg says the conversation around Beyonce matters. "It makes me feel like feminist culture is a rich place right now, even if it's a contentious one."

At the end of a year in which Facebook COO Sheryl Sandberg released Lean In, her rallying cry for women's progress at work; Miley Cyrus and Diane Martel provoked everybody; another hashtag, #solidarityisforwhitewomen, was born; and British singer Lily Allen put her foot in it, Beyonce's album has reignited conversations about the boundaries of feminism today.

And as Beyonce says, she's a grown woman. She can do whatever she wants.

A previous Web version of this story incorrectly identified Sheryl Sandberg as CEO of Facebook. Sandberg is the COO.