Accessibility links
The Woman Behind The Curtain, Making Good Songs Sound Great : The Record Emily Lazar is a rarity in the music industry: a female mastering engineer with a slow, collaborative approach. She's had a hand in more than 2,000 songs and albums, working with everyone from Lou Reed to Vampire Weekend. 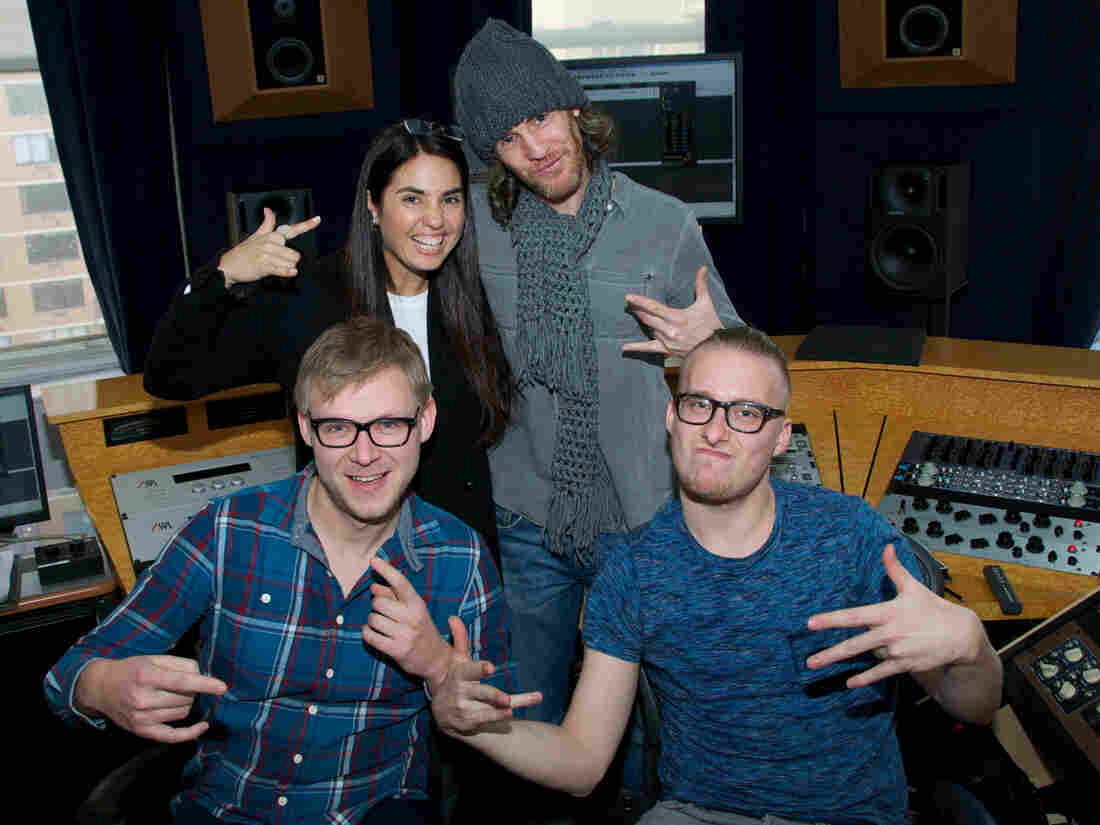 Mastering engineer Emily Lazar poses with producer Scott Jacoby (top right) and members of the band School is Cool at her Manhattan studio, The Lodge. The Lodge hide caption 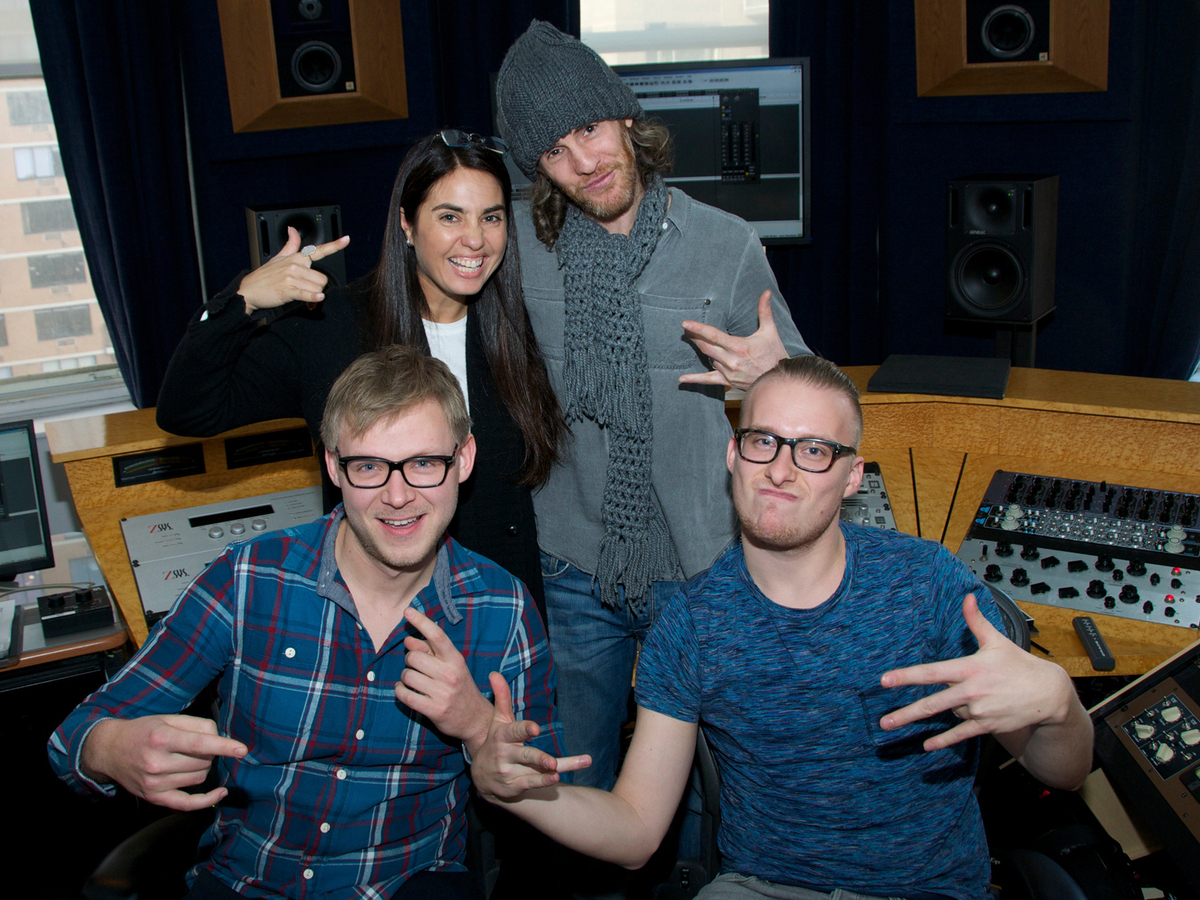 Mastering engineer Emily Lazar poses with producer Scott Jacoby (top right) and members of the band School is Cool at her Manhattan studio, The Lodge.

Mastering engineer Emily Lazar listens back to a section of the song "Envelop Me" by the baroque pop band School is Cool. She's trying to make the main vocals stand out more.

"We pick certain frequencies that we want to hear either more or less of, and those kind of translate into colors for the listener," she explains. "Right now in the raw mix, the lower frequencies, or the low mids of the drums, are kind of clouding up some of the other areas we'd like to hear a little more of — specifically these acoustic instruments that are playing, and the lead vocal.

"We'd like to have a little bit more presence and intimacy," she says, "so that when you're listening on your headphones or in your own space, you feel like Johannes, the lead singer, is right there singing to you."

In the early years of audio recording, musicians performed live in the studio and their songs were captured directly onto a master disc. Today, the process tends to include a few more steps — the last of which involves mastering engineers like Lazar. School is Cool singer Johannes Genard says these final adjustments help emphasize the things he really wants the music to express.

"When trying to convey a story," Genard says, "mastering can bring to the foreground frequencies that we associate with certain emotions or certain atmospheres. Certain frequencies convey more aggression or energy, and certain frequencies evoke depth. It's more, like, psychological than technical."

Genard and his bandmate Toon Van Baelen flew in from Belgium to work with Lazar because they admired her work on Vampire Weekend's album Modern Vampires of the City, which is up for a Grammy this year.

"When the time came to look at people we wanted to work with, I just put down the list of everybody who worked on that record!", Genard says. "I saw that Emily Lazar worked on mastering and mixing as well. We love the fact that we can just be here while she's actually doing it and thinking of the tweaks."

Mastering engineers often work alone, polishing several albums at once without the artists' involvement. But at The Lodge, Lazar's studio in Manhattan's Greenwich Village, that's not the case. "For me," Lazar says, "the best approach has to be a dialogue. It's the essential part of what I do."

Lazar points to a collaboration with Lou Reed on the mastering of a best-of collection. "We really had a wonderful time listening back to a lot of the music," Lazar says. "Lou hadn't initially planned to include the track 'NYC Man,' and when we were going through the original analog masters, I heard the track come off the tape machine and it was just amazing. I looked at Lou and I said, 'Lou! How come this isn't on this? You are the NYC Man!' We both laughed, and it actually became the title track."

Her collaboration with Vampire Weekend went a step further. The band sent the first single from its 2008 debut to several mastering engineers as a way of determining the best match. As guitarist and keyboard player Rostam Batmanglij explains, "Emily was the only one who sent back multiple versions of the song. She sent back six different versions, and there was one that I thought sounded better than all the rest, including the ones that were mastered by other people, and from there we made a decision."

Vampire Weekend's next two albums were also mastered by Lazar. Batmanglij says that while full-length records are often mastered within a day, Contra and Modern Vampires of the City both took several months, with him and Lazar sometimes working directly on his laptop. He says their process feels a little like filmmaking.

"If someone is in a shot and they're further away from you or they're closer to you, or they're more to the right or to the left, all of those things are going to affect how you perceive their performance," Batmanglij says. "I think, with the way we've worked on records with Emily, we've gotten to that point where we have that control."

In the end, its Lazar's job to make sure listeners hear what the musicians are after — not only sonically, but conceptually.

"Mastering engineers have a unique opportunity to help an artist tell their story, or even find their story," Lazar says. "I have these three huge windows in my mastering studio that look out over Astor Place, and sometimes when I'm working I look out the window. I see people walking around downtown with their headphones on and I like to imagine that maybe they'll be listening to the stuff that I'm working on. I get so excited and tickled to be a part of it."

So, the next time you listen to a song, think about the woman who might be behind the curtain.